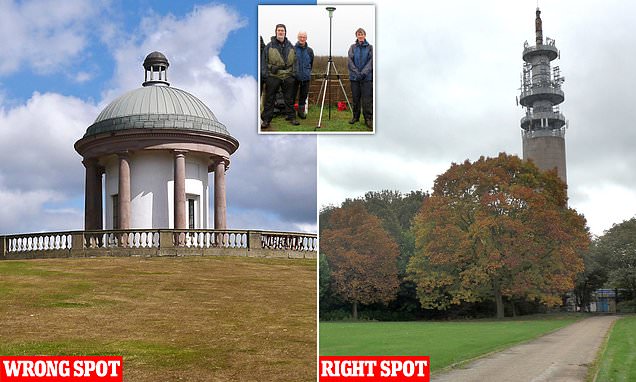 Peaky blunder! The wrong spot in Manchester has been labelled as the area’s highest point for 200 years

A team of amateur surveyors have discovered that the wrong spot in Manchester has been labelled as the area’s highest point for over 200 years.

The Temple in Manchester’s Heaton Park was believed to be the city’s highest point and a monument was erected there in 1800 to mark the spot.

But it turns out the tallest point is actually 550 yards away in a much less picturesque location. 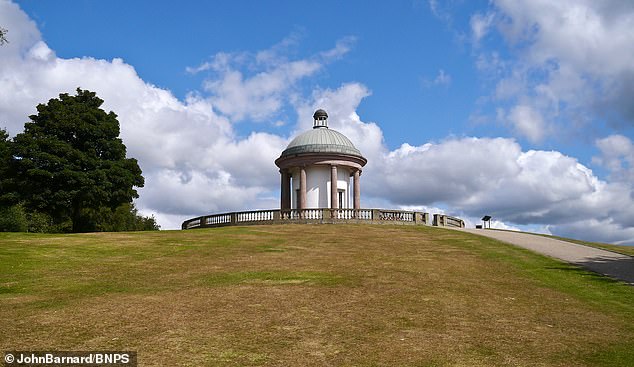 The Temple at Heaton Park, which for years has been said to be Manchester’s highest point 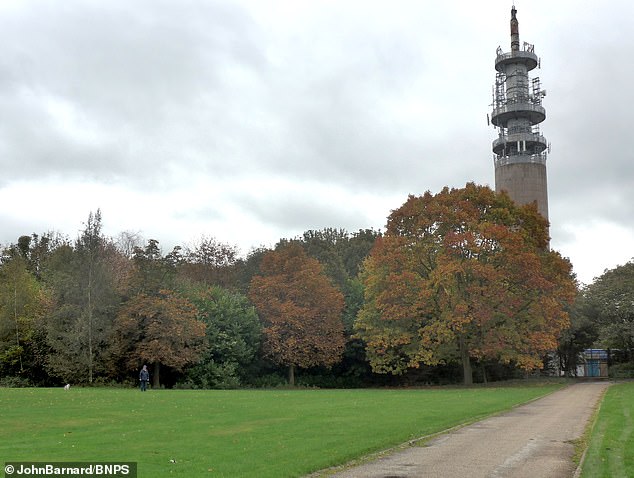 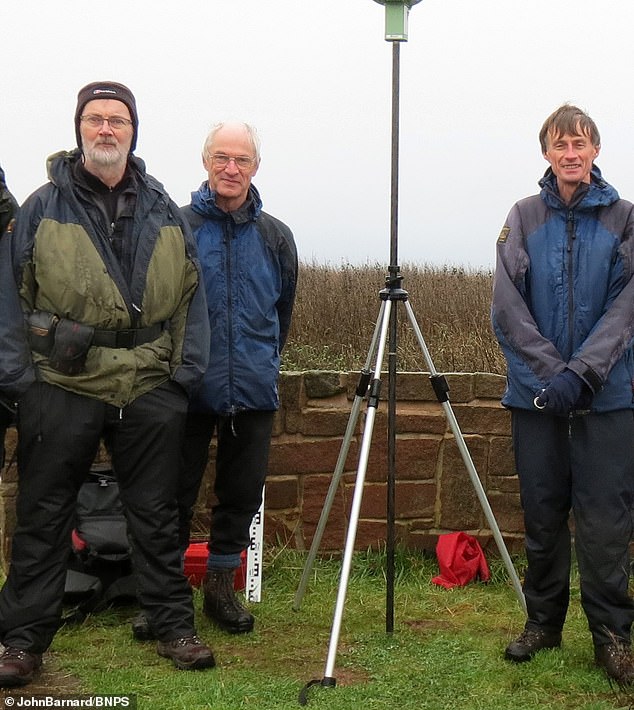 The Temple attracts thousands of tourists a year who are met with spectacular views over the city and the moors beyond when they reach the top, 354ft above sea level.

A sign at the summit declares: ‘The Temple stands at the highest point in the City of Manchester.’

But independent surveyors John Barnard and Graham Jackson have carried out detailed analysis using technology similar to a car’s Satnav to re-measure the hill.

And they have established that a far less picturesque spot 547 yards from the Temple is actually 8ft 6in higher. 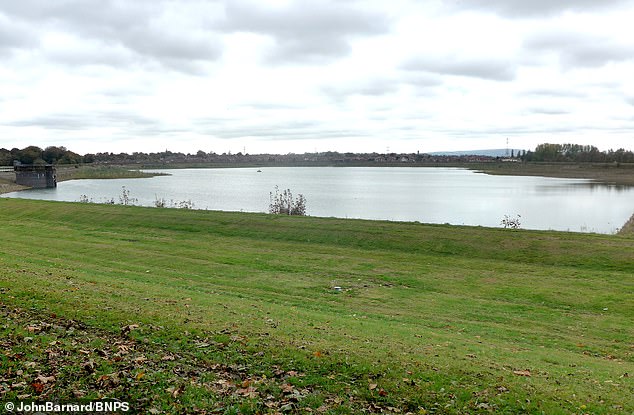 Heaton Park reservoir, pictured above, is one of the views from the new highest point 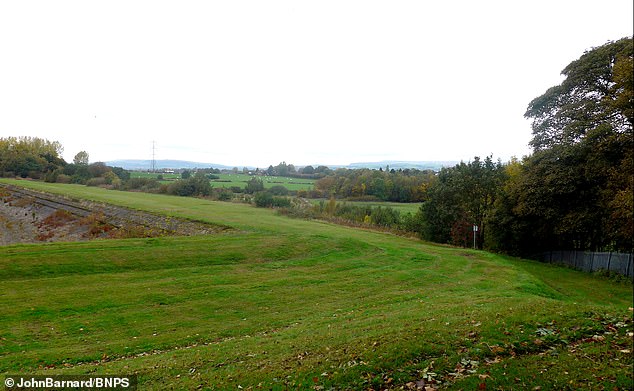 Revealing: The team of amateur surveyors carried out analysis using technology similar to a car’s Satnav to re-measure the hill. Above is another view from the new highest point 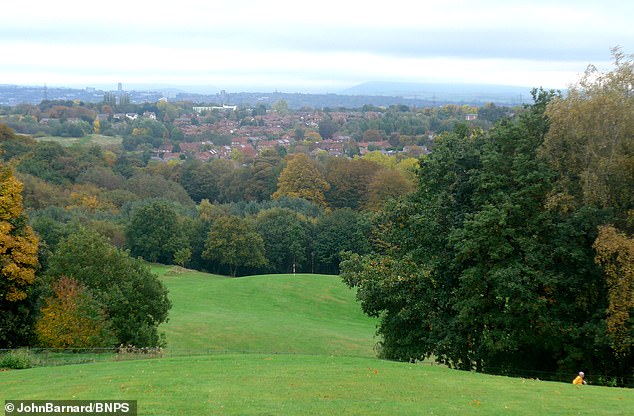 The view from the temple area, which attracts thousands of visitors a year

The new peak is in a wooded area next to a security fence and close to a communication tower.

They have notified officials at Manchester City Council of their findings and are urging them to put new signs up pointing out the new peak.

The Temple was designed by James Wyatt in 1800 and is believed to have first been used as an observatory by Sir Thomas Egerton, the first Earl of Wilton.

Mr Barnard and Mr Jackson were called in when George Gradwell, from the Database of British and Irish Hills, noticed an anomaly at Heaton Park when looking at some data submitted by users.

‘I visited Heaton Park but it was not possible to tell visually if this alternative point was higher, since there is no direct line of sight between the two points.

‘So I called in my colleagues, Graham and John from G&J Surveys, to carry out an on-the-ground survey.’ The tallest point is actually 550 yards away from the original spot, as shown in the map above

Poor visibility on the day they carried out their survey meant the team could not enjoy the views, but this did not prevent them from collecting data using GNSS (Global Navigation and Satellite System) technology, which accurately measures heights using satellites.

The data they collected showed the Temple was 353ft 4in high, while the other spot in the wood was 361ft 10in.

Mr Barnard said: ‘A feature of The Temple is it’s claimed to be the highest point in the Manchester Metropolitan district. There is a noticeboard next to the building asserting this.

‘No doubt many people have stood within the Temple, admiring the views over Manchester and beyond while at the same time feeling pleased that they are standing on the highest point in the district.

‘Our data now shows a new highest point for Manchester has been found. The new summit position, in the wood next to a security fence, is clearly the highest point. 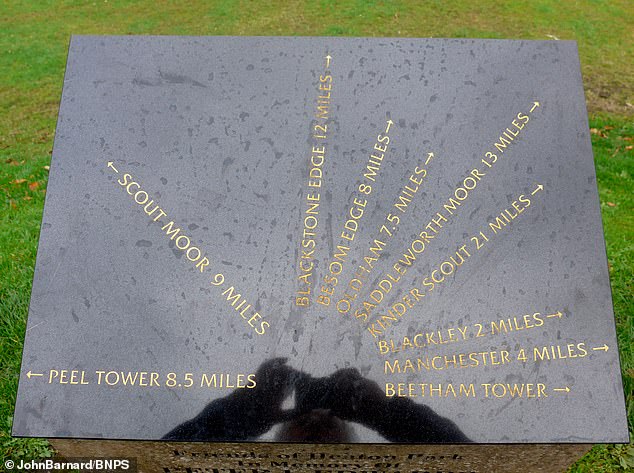 ‘In some ways it is a pity because the Temple makes a much more impressive structure to crown the highest point and good views of the surrounding area can be obtained from there.

‘But the good news is the new summit is only 547 yards away and there is a pleasant walk between the two positions so enthusiasts can take in the views as well as bag the Manchester Metropolitan County Top.

‘The Heaton Park manager and the council initially showed interest and were keen to work with us but they have since failed to respond despite us chasing them several times.

‘They said they were not planning to make any changes to the access.’