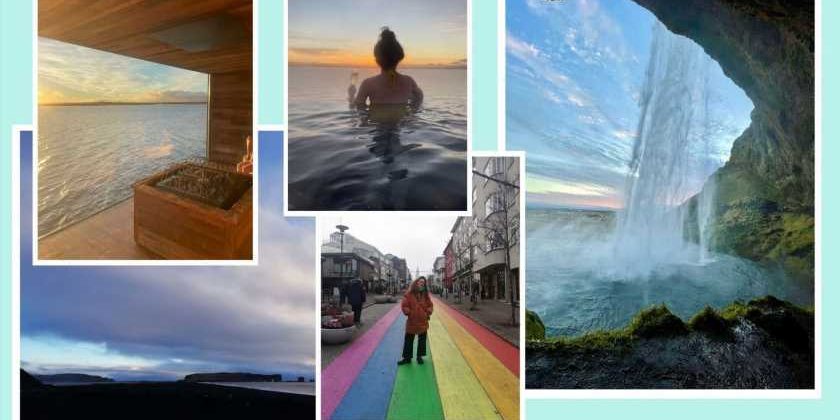 From soaking in the waters of a geothermal spa to hiking beside magnificent waterfalls, Reykjavik is the perfect base to explore the natural wonders of Iceland, says Christobel Hastings.

Exactly seven years ago, I ticked off one of my bucket list travel destinations with a trip to Iceland. As a child who never missed a Sunday night David Attenborough documentary, I’d long nursed a desire to see the country’s awe-inspiring natural wonders beyond the TV screen, and when I finally arrived in the land of fire and ice, it certainly didn’t disappoint. After marvelling at the hot springs, thundering waterfalls and dancing northern lights, I could confirm that Iceland was every bit as magical as I’d hoped. Quite simply, it was like going to the ends of the earth.

So when I was offered a four-day autumn city break to Reykjavik, I jumped at the chance to return. Having visited most of the major tourist hotspots during my inaugural adventure, I was curious to venture beyond the likes of the Blue Lagoon and the Golden Circle and see what else the Nordic wilderness had in store. Could I fall in love with the country a second time around? It was time to find out.

The largest city in Iceland and country’s capital, Reykjavik sits on the Seltjanar Peninsula, in south-west Iceland by Faxaflói Bay. Founded by hardy Vikings in AD874, the capital city is the cultural and political hub of Iceland, where you’re just as likely to find politicians strolling the streets on their lunch break as you are to rub shoulders with tourists enjoying a cinnamon bun from one of the many artisan bakeries lining its streets. But while it’s home to an array of fascinating museums, colourful bars and stylish concept stores, it’s also considered the gateway to Iceland, which is why I’ll be using it as my base for the next few days as I explore the natural wonders on its doorstep.

Driving away from the black lava fields surrounding Keflavik airport one late October morning, I’m soon greeted by the sight of brightly painted houses in the capital city. The arrival at my hotel for the next four days only improves my spirits: I’m staying at the Exeter Hotel, a Scandi-chic establishment situated in the heart of Reykjavik, just a stone’s throw from the Old Harbour. My room overlooks the pier, where the popular whale watching tours depart every morning, and the 106-room hotel is outfitted in mid-century décor and feels exactly a renovated warehouse, which makes sense when I find out later on in the day that it actually used to be one. To my delight, I also discover an on-site bakery with a delicious array of sweet pastries and a street food-inspired restaurant that’s teeming with locals – always a good sign. As far as sightseeing goes, it seems the hotel couldn’t be better placed; just an 8-minute walk from the Harpa concert hall and 15 minutes from the hallowed Hallgrímskirkja church. But that’s not where I’m headed today.

The Rainbow street in downtown Reykjavík leading up to Hallgrímskirkja

While there’s a lot to be said for curating your own itinerary, a short break in a bustling city like Reykjavik means that deciding what attractions to visit can be tricky. Happily, a new partnership between easyJet and international activities service Musement means that I’ve a brilliant array of excursions lined up for the duration of my trip. So, after a quick breakfast in the hotel’s canteen – and piling on my thermal layers – I set off in the company of a local guide for a traditional food tour. The city has a thriving culinary scene, and while you can expect a strong focus on seafood, there’s a huge diversity of flavour to be found in the local cuisine. Strolling through the cobbled streets, we make pitstops at a famous hotdog stand once visited by Bill Clinton, the city’s oldest restaurant where we sample a traditional lamb soup and a harbourside joint for the country’s most notorious delicacy, hákarl (fermented shark), which I decide to skip after observing the grimaces of my fellow walkers. It’s a great way to kickstart the trip, and come the end of the tour, we all toast our guide with a shot of brennivín, the signature spirit of Iceland.

The sauna at the Sky Lagoon overlooks the North Atlantic Ocean

As you might expect for a country situated near the Arctic Circle, Iceland is a bit nippy, and after pottering around the city for three hours, I definitely needed to defrost. Having developed a serious appreciation of Icelandic bathing culture during my first visit (those waters really do have healing powers), I was thoroughly cheered by the news that I’d be paying a visit to the Sky Lagoon that afternoon. Perched above the North Atlantic sea on the outskirts of Reykjavik, the steaming geothermal pool offers visitors both a relaxing dip and a seven-step spa ritual after soaking in its waters. Unlike its hugely popular rivals the Blue Lagoon and the Secret Lagoon, though, the newcomer is Iceland’s only thermal infinity pool with an ocean view, thanks to a striking cliffside location that makes you feel as though you’re floating in the sea. Gazing out at the sunset with a glass of prosecco in hand (the lagoon has a superbly placed swim-up bar), I felt a sense of deep relaxation wash over me that left me in no doubt why Iceland regularly ranks as one of the world’s happiest countries.

After a deep sleep, dawn broke early on the second day of the trip as I boarded a minibus for a tour of southern Iceland, dozing occasionally as the sun rose over the rugged landscape. Our cheery tour guide, who kept us in good spirits with humorous tales about Icelandic culture, took us first to the majestic Skógafoss waterfall, where the storm clouds suddenly gave way to a beautiful rainbow. From there, we journeyed onward to the Sólheimajökull glacier, a sublet of the mighty icecap of Mýrdalsjökull. Framed by the volcanoes Katla and Eyjafjallajökull, its electric blue and black ice caps are a spectacular sight to behold. But it’s also a sobering lesson in global warming: every year, Sólheimajökull shrinks by the size of an Olympic swimming pool.

The majestic Skógafoss waterfall in the south of Iceland

After lunch, we continued on to Reynisfjara, a shimmering black sand beach just beside the fishing village of Vik í Myrdal. Here, there’s wonder upon wonder to fill your camera roll, from the glittering caves and lava formations to the perfectly shaped hexagonal basalt columns lining the beach, which look like stepping stones. Like every landmark in Iceland, there’s a story to accompany it: according to local folklore, three gigantic sea stacks sitting off the shoreline at Reynisfjara were once fearsome trolls that were turned to stone; and if you’re a fan of Game Of Thrones, you might have spotted them in the seventh season at the Eastwatch-by-the-Sea branch of The Wall. Before we returned home, we made one final stop at Seljalandsfoss, one of the few waterfalls in the world that you can safely walk behind. As I inched my way around the mighty curtain of water to watch the sunset, I felt as though I’d stepped into a fairy tale.

The shrinking Sólheimajökull glacier on the south coast of Iceland

And just like that, my final day in Reykjavik rolled around with an early whale watching tour at the Old Harbour. Home to everything from the enormous humpback whale to the diminutive harbour porpoise, a diverse range of sea creatures are regularly spotted in Faxafloi Bay, and the prospect of seeing the gentle giants in their natural habitat elicited a childlike thrill of excitement. As we bobbed along on the iron grey waves, I’ll admit I was sceptical of our chances; you can’t pay a whale to put in an appearance, after all. But as it turns out, sea creatures aren’t put off by arctic conditions: there’s still an excellent 80% chance of seeing whales in wintertime. Before long, our eagle-eyed tour guide alerted us to swells of dolphin pods in the distance, and before long they were frolicking alongside the boat, much to our delight. After scouring the sea for another hour as we cruised along the coastal curve, a hvalreki – Icelandic for a stroke of good luck – came when several minke whales emerged to gasps of wonder from the entire boat.

After refuelling with burgers at Le Kock and Tail, we set off to Perlan – Wonders Of Iceland, the only planetarium in Iceland where you can learn all about the unique geology of the country through its interactive exhibitions. Visiting a museum might not sound like the most riveting pursuit given all of Iceland’s attractions, but you really have to step inside to see why it’s so special. Sitting atop Öskjuhlíð hill, the beautiful glass-domed building is home to an indoor ice cave, a replica of Europe’s largest bird cliff and an observation deck with an amazing 360° view of Reykjavik. A real highlight, though, is Áróra, Perlan’s immersive show about the aurora borealis. With our northern lights tour cancelled that evening due to bad weather, it was well worth laying back in the planetarium and seeing the lights dance all around – full marks to the museum for the brilliant simulation.

Of course, there’s plenty more adventure to be had in Iceland, whether you’re keen to explore an ice cave under the Katla volcano, hike over the Skaftafell glacier or venture into the natural lava tunnel of Raufarholshellir – all excursions that can be planned with easyJet once you’ve booked your holiday. If you’re the kind of person who bookmarks culture recommendations on Instagram before setting off on a trip, this really is a smart way to ensure you plan the perfect itinerary and get a better insight into your destination. Plus, you’ll undoubtedly discover some under-the-radar gems that won’t be hit by the crowds.

The magnificent Seljalandsfoss waterfall on the south coast of Iceland

Even after all my adventures in Reykjavik, I came away from my trip feeling rested, relaxed and inspired by life again. Wellbeing is embedded in the Icelandic DNA, and nothing perhaps epitomises this more than Þetta Reddast, a beloved motto that loosely translates to the idea that everything will work out in the end. After four days experiencing the beauty and wonder of Iceland, I genuinely felt as though I was seeing the world with new eyes. And that’s what travelling is all about, right?

easyJet holidays offers three nights at the four star Exeter Hotel in Reykjavik on a room only basis for £371 per person, including 23kg of luggage per person and flights from London Gatwick on 6 December 2022