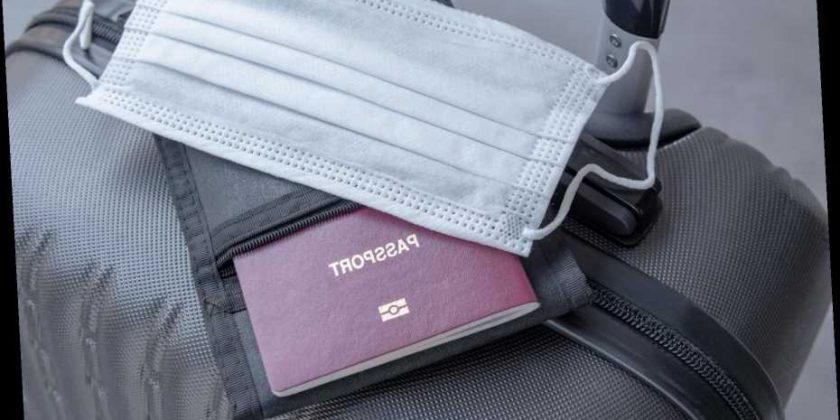 As more Americans begin dusting off their passports in hopes of resuming travel in the coming months, there's a new type of documentation they may need before taking to the skies: a vaccine passport.

Following the Centers for Disease Control and Prevention's (CDC) recent announcement that fully-vaccinated Americans can now travel domestically without having to undergo a COVID-19 test or quarantining, airlines and travel industry groups are hoping a standardized vaccine passport will help them navigate the changing rules as safely and efficiently as possible.

Below, we've rounded up everything you need to know about vaccine passports, from how they work, to if they'll be federally mandated, and how they could be the first step towards reviving global tourism.

What Is a "Vaccine Passport?"

A vaccine passport is a digital record of an individual's COVID-19 vaccine certification. It may be used to gain entry into different countries, institutions, venues or other areas that require visitors be vaccinated for access. The term "passport" is something of a misnomer, as the document does not provide proof of citizenship. The name likely stuck because it is a document you may need to present during travel.

At this point, several competing organizations are working on their own vaccine passport apps, each with their own specificities — and little of that information has yet been made public. Some will allow you to upload your own documents, while others will connect to official lab results. When Will They Take Effect?

Some versions of a vaccine passport are already being used. New York state began using the IBM-developed app Excelsior Pass in March, which pulls from the state's vaccine registry to confirm vaccination status in order to attend certain events or enter venues.

IBM is also creating its own Digital Health Pass, built on its blockchain technology, which would pull data such as temperature checks, test results, vaccine status and more, according to The New York Times. Swiss nonprofit The World Economic Forum and the Commons Project Foundation is developing CommonPass, which would create a scannable QR code showing proof of testing or vaccination. The International Air Transport Association is also working on a travel pass initiative, which is currently being tested among 22 airlines, according to USA Today.

Is it the Same as a Vaccination Card?

A vaccine passport is not the same as a COVID-19 Vaccination Record Cards, the paper cards you receive after getting your vaccine doses, which are issued by the CDC.

Public health experts strongly recommend you keep this card handy, however, as it will prove your immunization status and streamline possible booster shots in the future, according to ABC News. Do I Need One to Travel?

It remains to be seen how vaccine passports will be utilized by different countries and organizations.

The World Health Organization said in March that it does not support mandating vaccines as an international travel requirement for many reasons. One is that vaccine access varies greatly across the globe, with more affluent countries receiving earlier access to widespread distribution.

While vaccine passports may open the door to travel in the coming months, the CDC's guidance remains the same: avoid non-essential international travel. "Fully vaccinated travelers are less likely to get and spread COVID-19," the agency's update read in part. "However, international travel poses additional risks and even fully vaccinated travelers are at increased risk for getting and possibly spreading new COVID-19 variants."

RELATED: COVID-19 Vaccination Cards Could Be Required for Travel and Other Activities Will They Be Mandated By the Government?

On Monday, April 5, Dr. Anthony Fauci told the Politico Dispatch podcast that vaccine passports will not be mandated by the federal government, echoing White House press secretary Jen Psaki's statement that there will be "no federal mandate requiring everyone to obtain a single vaccination credential" from the week prior, according to The Hill.

Instead, according to Dr. Fauci, certain independent businesses such as theaters or educational institutions may choose to enforce them or form their own vaccine requirements.

"I'm not saying that they should or that they would, but I'm saying you could foresee how an independent entity might say, 'Well, we can't be dealing with you unless we know you're vaccinated,'" President Biden's chief medical advisor said on the podcast. "But it's not going to be mandated from the federal government."

Does Everyone Agree On Them?

The concept of vaccine passports has sparked debate, with The Hill reporting that Republicans plan to focus on the issue in an effort to secure midterm voters who may be concerned with government overreach, despite the fact that the Biden administration has confirmed they will not be mandated. Florida Gov. Ron DeSantis has already issued an executive order banning vaccine passports in the state. Has This Ever Been Done Before?

This isn't a brand-new concept: travelers have long been required to show proof of vaccination against diseases such as yellow fever or cholera, providing a physical "yellow card" — known as an International Certificate of Vaccination or Prophylaxis — when traveling to certain parts of the world.

The key difference is that the current vaccine passports in the works will be digital, rather than on paper, in an effort to streamline the process and reduce the risk of fraud.

What Are the Concerns?

Most of the apps currently being developed are for smartphones, which poses potential issues around accessibility for older and lower-income individuals, who may be more likely to lack access to the necessary device.

Speaking to Wired, Justin Beck, founder of Contakt World — a public health communications company working on contact tracing and vaccine administration apps — said, "We need to make sure we're not creating more disparities than already exist in our health system." He expanded on various points of consideration, adding, "Those go beyond just smartphone usage, to: What if people aren't literate? What if they don't speak English? What if they have real reasons why they're not getting vaccinated? Passports raise a lot of equity issues that go beyond smartphone use, and we'll have to spend a lot of time and resources overcoming them."