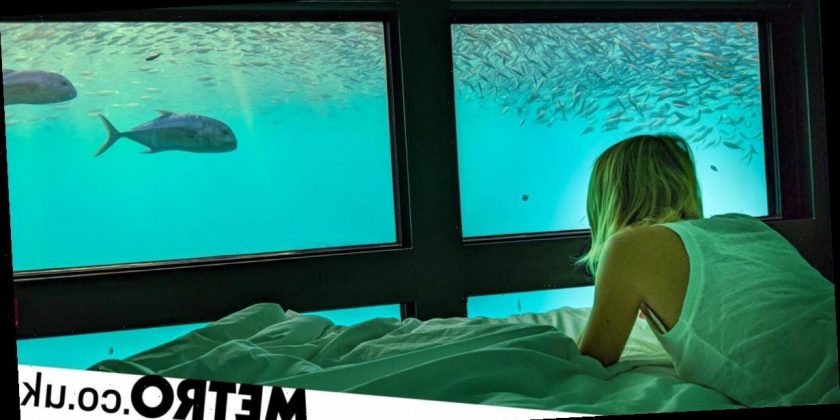 It’s 2am, a huge shoal of tiny fish dart in unison past my window, surrounding a 400kg giant grouper. It’s the aquatic equivalent of the M25 – the most active I’ve seen this underwater world all day.

I’m staying at Reefsuites, pristine rooms submerged in the sparkling waters next to Hardy Reef, one of the many reef systems and coral cays that make up the Great Barrier Reef in Australia.

The only accommodation of its kind in the country, the Reefsuites enable gests to experience life on the reef after dark.

And while it’s perhaps not the best night’s sleep I’ve ever had, it’s certainly the most exciting, with each hour bringing a new dynamic, and a new species of the more than 1500 types of fish that live in the worlds largest reef system.

The highlight is undoubtedly the giant grouper. A enormous imposing presence that fills almost all of our window as it slowly passes through. Occasionally it takes a bite, and the sound of its huge jaws closing on its prey resonates throughout our suite.

For whatever reason, it seems to like us, and from its first appearance at 7pm the night before, it has spent almost the entire night hanging out by our suite window.

Perhaps it’s the unusual nature of this experience or perhaps it’s the occasional aquatic noise, but I’ve woken up a few times since falling asleep at 10pm.

I don’t consider this a bad thing, as each awakening offers something new, and each time the grouper has been there, peering in like our guard fish as my husband, Enrico, puts it.

In the morning, we awake and the grouper is gone. Enrico is downbeat that he missed a last viewing of this impressive creature, but a mesmerising wall of different (and much smaller) fish fill our window.

Then as we are gazing out from the bed, the grouper makes one final appearance, before disappearing into the blue for presumably the rest of the day.

In a few hours, Reefworld pontoon, where the Reefsuites are located, will be bustling with snorkellers, admiring the colourful corals and marine life, and the grouper will swim in peace, far below the surface.

Reefworld offers a variety of ways to explore the Great Barrier Reef.

Day-trippers visit each day by boat from nearby Hamilton Island and Airlie Beach on the mainland. This is an accessible way to snorkel for children or those less confident in the water, all equipment is provided, along with an excellent buffet style lunch, which is particularly good considering it is put together from a kitchen 40 nautical miles from shore.

Guests, including those spending the night on the pontoon, arrive at 11am, when the activities commence.

For those who don’t fancy getting wet, a semi submersible offers a dry way to see the reef, along with an underwater viewing station on the pontoon.

Divers, both certified and beginner, can explore the reef with resident dive masters, offering a greater chance to see pelagic fish, such as reef sharks and rays.

For those wishing to maximise their experience, scenic helicopter flights are available, giving the opportunity to see the much photographed heart reef, and marvel in the many shades of blue and green from above.

At 3pm the day visitors leave the pontoon, returning to Hamilton Island and Airlie Beach, a journey that takes two or three hours respectively.

In addition to the two Reefsuites, you can also stay as a Reefsleep guest, sleeping in a luxury swag on top of the pontoon.

As soon as the guests departed, we were shown to our suite for the night.

We had been wondering all day where the entrance to our room might be, and were soon led past a door that said ‘private’ and into an illuminated stairway. At the bottom of this we were shown through another door and into our room.

Despite the fact that we had seen photos of the suite, both Enrico and I were squealing like excitable children at our first glance of the accommodation.

An entire wall of the suites is comprised of floor to ceiling windows, which flow into the bathroom. This means that while lying in bed, getting changed, going to the toilet or having a shower – we could look out into the blue.

Daily cleaning of the windows by the scuba dive team meant nothing obstructed our view and it really did feel as though we were underwater (which of course, technically, we were).

After gazing out of the window for half an hour, we hopped back into the water for another snorkel. The tide was much lower than earlier swims, which meant we were able to see different corals that had previously been much deeper.

I don’t think I’ve ever been as excited to take a shower (bar returning from five days at Glastonbury festival) as I was after this snorkel, and it was quite the experience to look out into a huge shoal of fish while I washed my hair in our bathroom.

As the sun sets, canapés are served on the top deck, along with beer and wine before our dinner shortly after.

Throughout the experience I was impressed by the quality of the food offering and dinner was no exception, steak, coral trout, roasted potatoes and an assortment of vegetables and condiments. Delicious and much needed after a day of snorkelling.

We headed down to our suite as darkness set in and settled into bed with our underwater ‘movie’. There are blinds which you can roll down, but there was no way we were going to be using these.

An optional blue light outside the window meant we could keep an eye on the action the whole night, and so we did just that.

As the sun rose the next morning, a glorious light flowed through the water and into our room, illuminating the windows in a vibrant green.

Breakfast was followed by a snorkel – this time spotting a huge sting ray – before the next days guests arrived.

A relaxed lunch and a snooze on the terrace later and we were on the boat back to Hamilton Island, still euphoric from our experience out on the reef. Easily the most exciting and unusual accommodation I’ve ever stayed in.

The majority of guests spend one night on the pontoon, so you’ll generally need a minimum night before and after either in Airlie Beach or Hamilton Island. We spent the days before and after our Reefsuites experience on the latter, at Beach Club, a beautiful waterfront property with an infinity pool.

We ended our stay in the Whitsundays relaxing by the pool, reflecting on our experience and wondering if the giant grouper would be visiting tonights guests at Reefsuites.

A stay at Cruise Whitsundays Reefsuites starts from £443 (AUD $799) per person for a double room. This includes boat transfers from Airlie Beach or Hamilton Island, two lunches, dinner and breakfast, along with drinks (including wine and beer) during your stay. Hire of snorkelling equipment including stinger suits and a guided snorkel is also included. Scuba diving incurs an additional fee. Cruise Whitsundays is part of Journey Beyond, Australia’s leading experiential tourism group, who also own luxury trains the Ghan and the Great Southern.

How to get there: