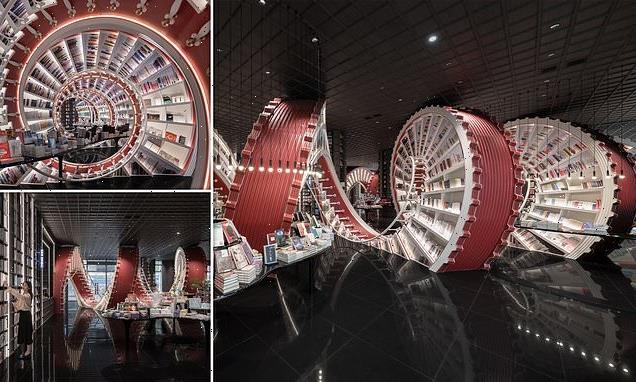 Stranger than fiction: A giant sideways spiral bookcase is the spectacular main attraction in this surreal new bookstore in China

Is this the world’s wackiest bookstore?

The defining feature in the newly opened Zhongshuge bookshop in the city of Shenzhen, China, is an enormous spiral staircase that twists around the shop – but customers can’t climb it. The jaw-dropping snaking staircase – which even features an ornate bannister – in fact serves as a fantastical bookshelf.

Li Xiang of Shanghai-based X+Living studios is behind the design of both the shop and the bookshelf, which doubles as ‘a huge artistic installation’. 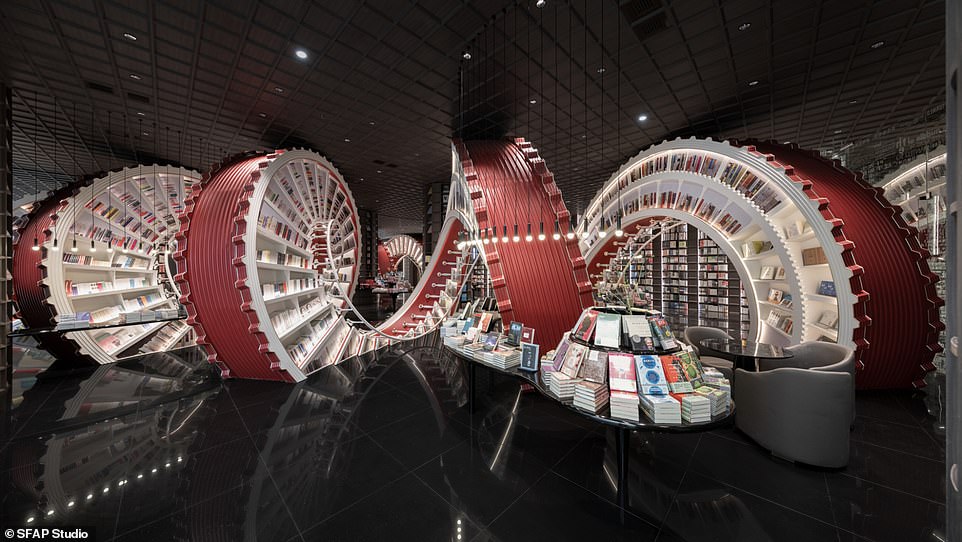 The defining feature in the newly opened Zhongshuge bookshop in the city of Shenzhen, China, is an enormous spiral staircase that twists around the shop 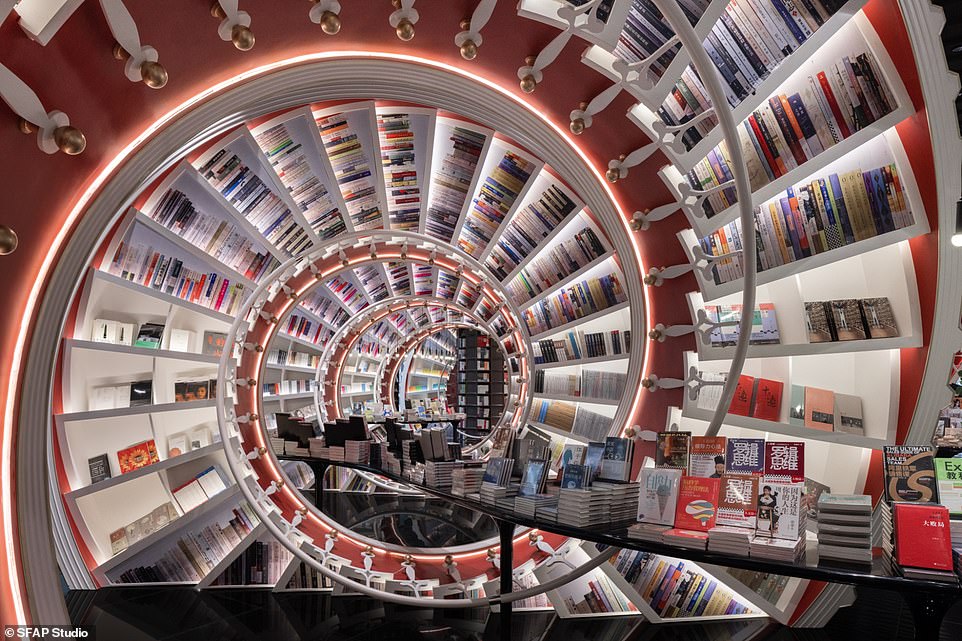 The whimsical staircase ‘serves as a functional bookshelf and also a huge artistic installation’, according to the designer

The bookshop, which opened this autumn, is divided into four separate spaces – a ‘concept’ area, a ‘forum’ area, a children’s reading bay and a conference space.

According to a statement from the studio, the staircase-bookshelf runs ‘in a curved trajectory through the entire concept area’ and connects with the entrance and exit, with bookworms able to wander through the coils, picking up novels along the way.

‘The designers have taken the symbolism of the ladder of wisdom and integrated the elegant and dignified bookshelves in the forum area into a towering ladder, creating a sacred temple of knowledge,’ the statement explains, adding that the structure intends to create an ‘intimate reading experience’. 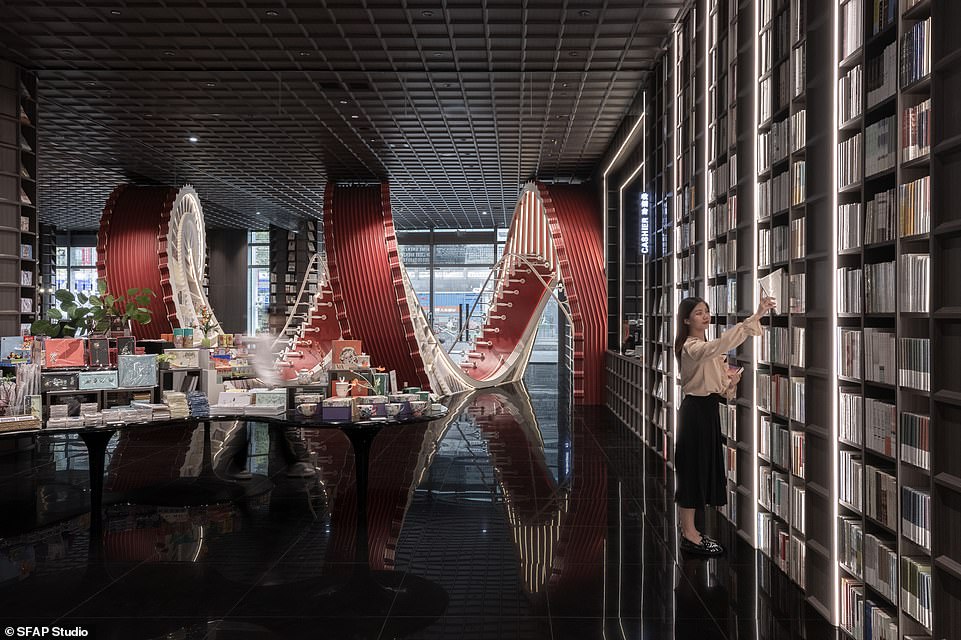 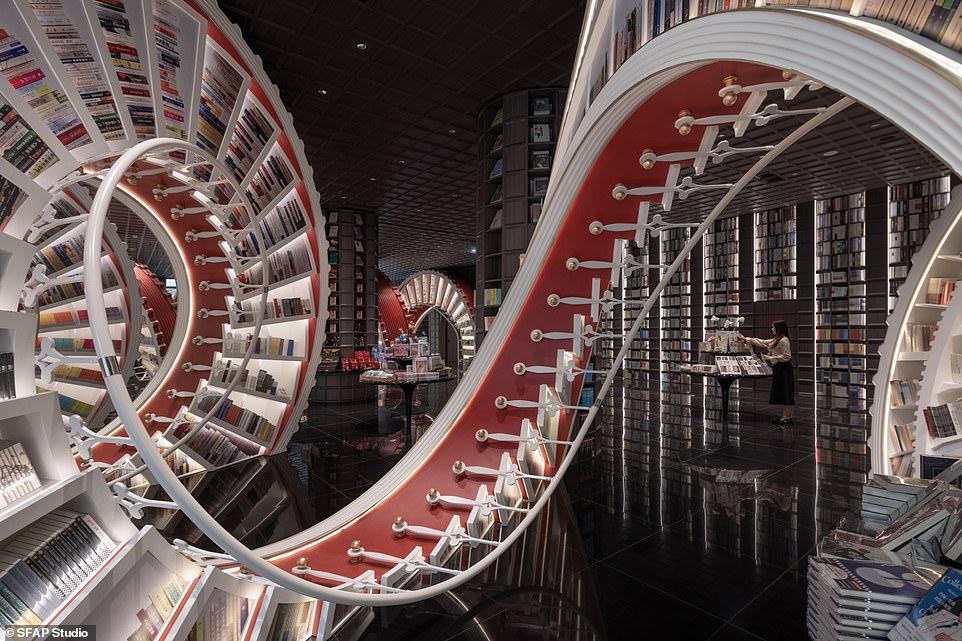 The structure, which is based on the ‘symbolism of the ladder of wisdom’, is intended to create an ‘intimate reading experience’ for book lovers

Elsewhere in the shop, the children’s reading area is a riot of pastel colours and cartoonish shapes that aims to conjure up ‘colourful and joyful memories’.

A Ferris wheel and a castle are built into the wall in yet more whimsical bookshelves, created using ‘simple lines and graphics’ and ‘childlike brushstrokes’.

The table at the centre of the space was designed to look like an amusement park carousel, ‘inviting children to make friends with books’. 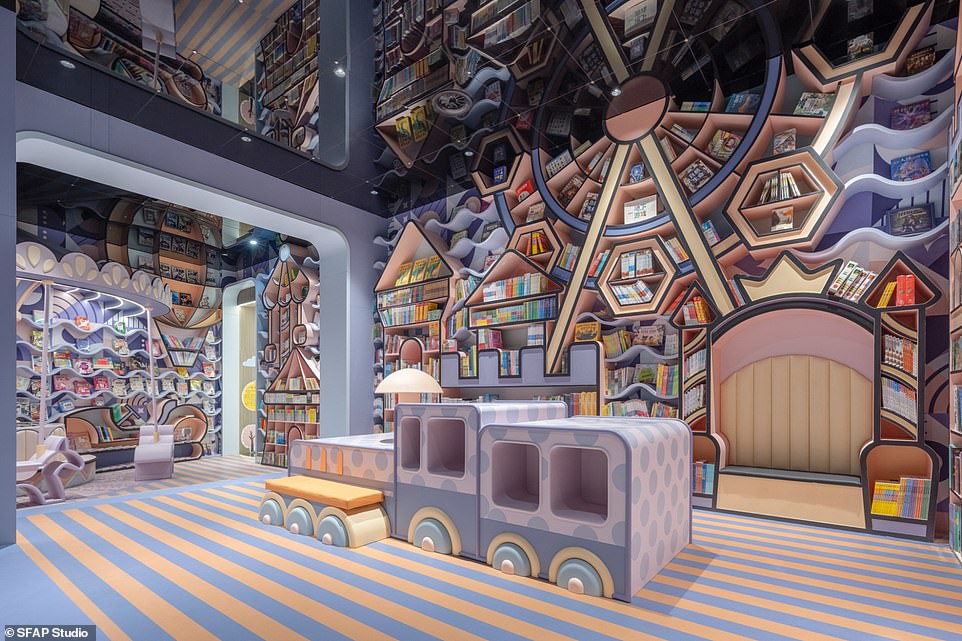 There are also ‘levitating tables’ with legs that blend in with the black-tiled floor to create a ‘surreal atmosphere’.

Describing the story behind the design, Li Xiang says: ‘In the process of researching the cultural background of this city, I realised that I could design a space which could become a symbol of Shenzhen itself as an inclusive and vibrant city of migrants, paying tribute to all those who have struggled to make history in this city.

‘Thus, this retail space, which seems to have grown out of a giant art installation, was born.’ 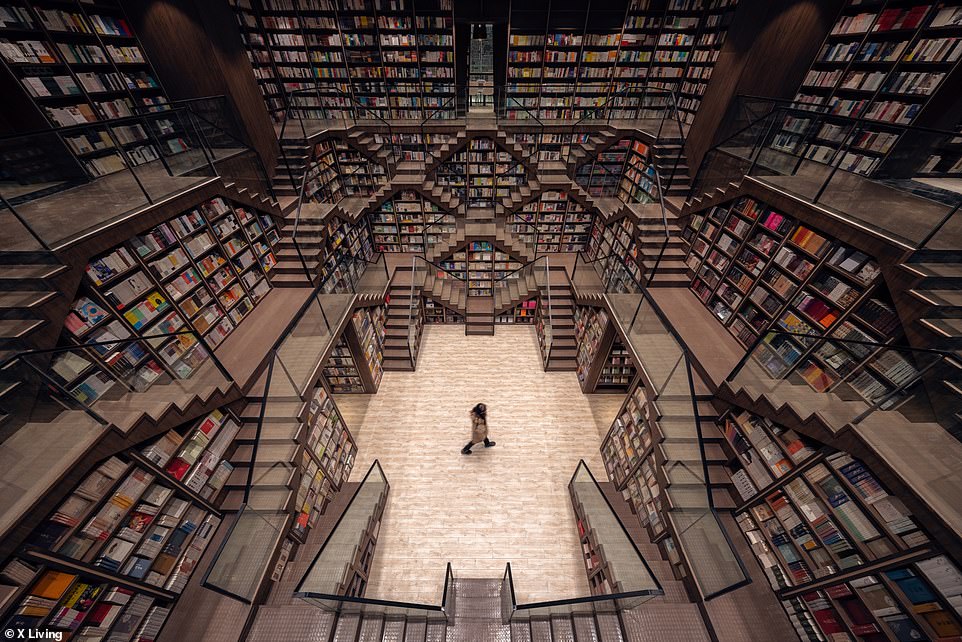 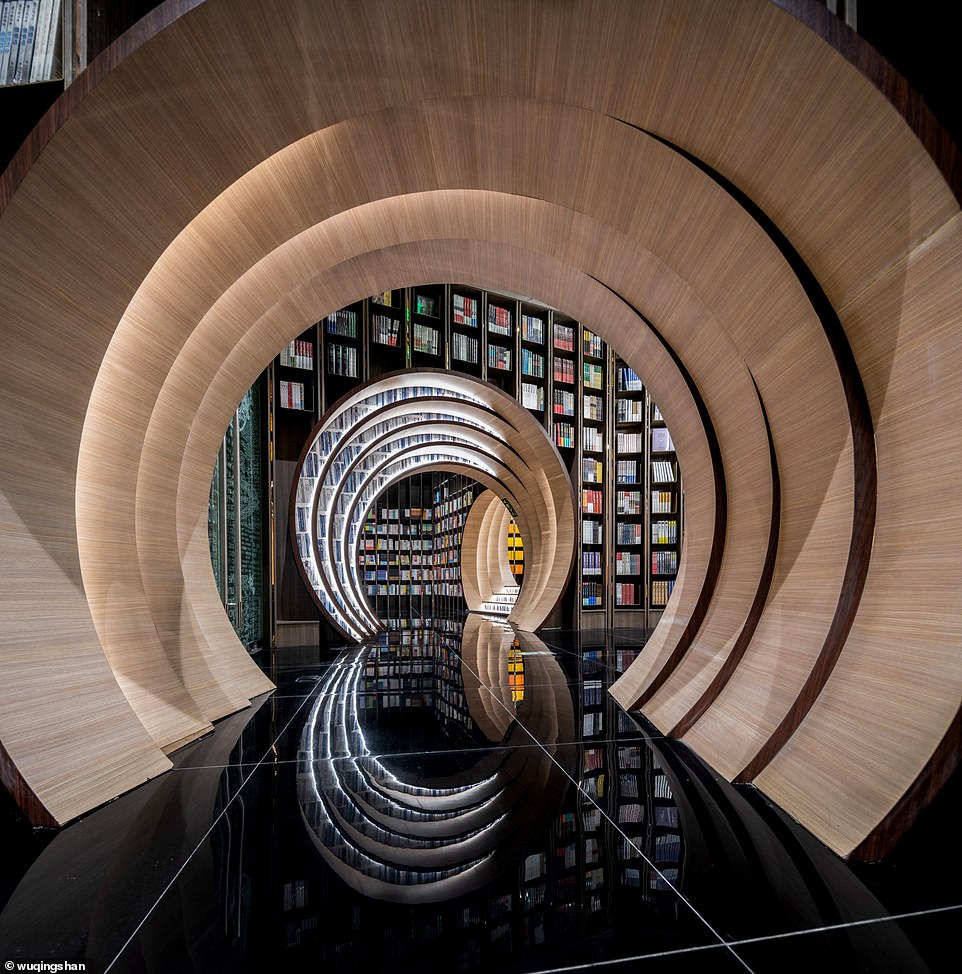 Above is the amazing Zhongshuge Lafayette Store in Beijing. Zhongshuge is a chain of bookshops across China, founded by book publisher Jin Hao 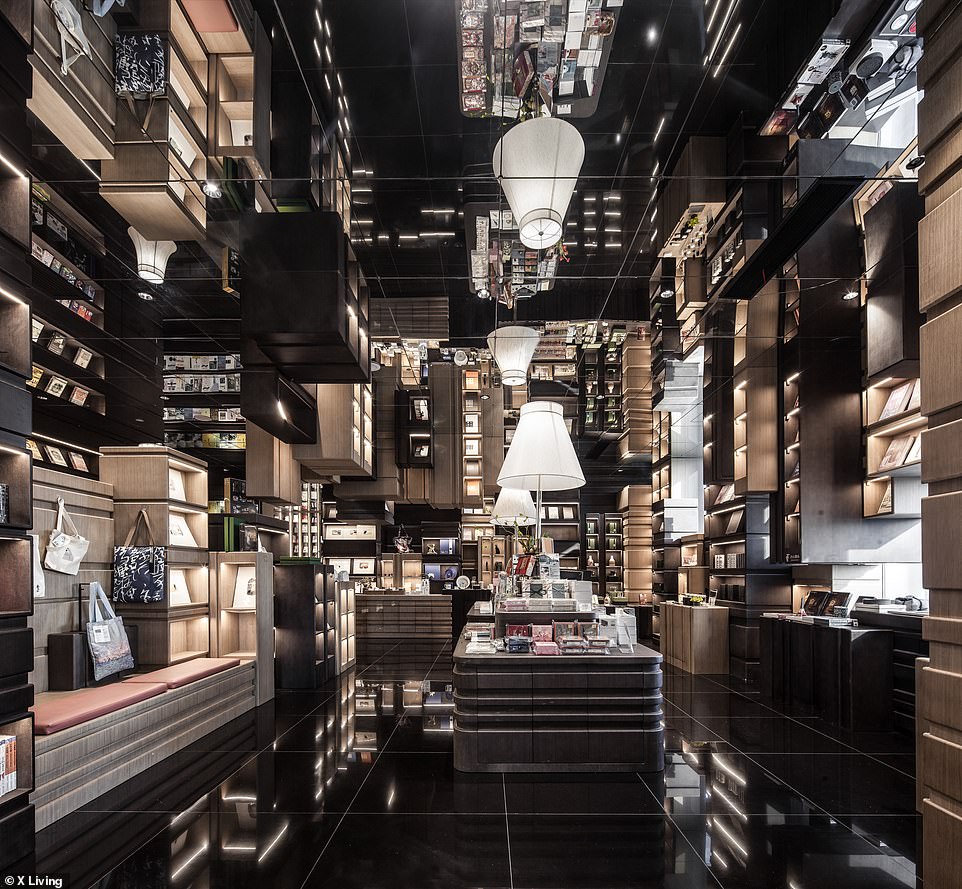 Pictured is the Zhongshuge shop in the city of Ningbo. Since 2010, X+Living studios has designed over 20 of the bookstore chain’s premises 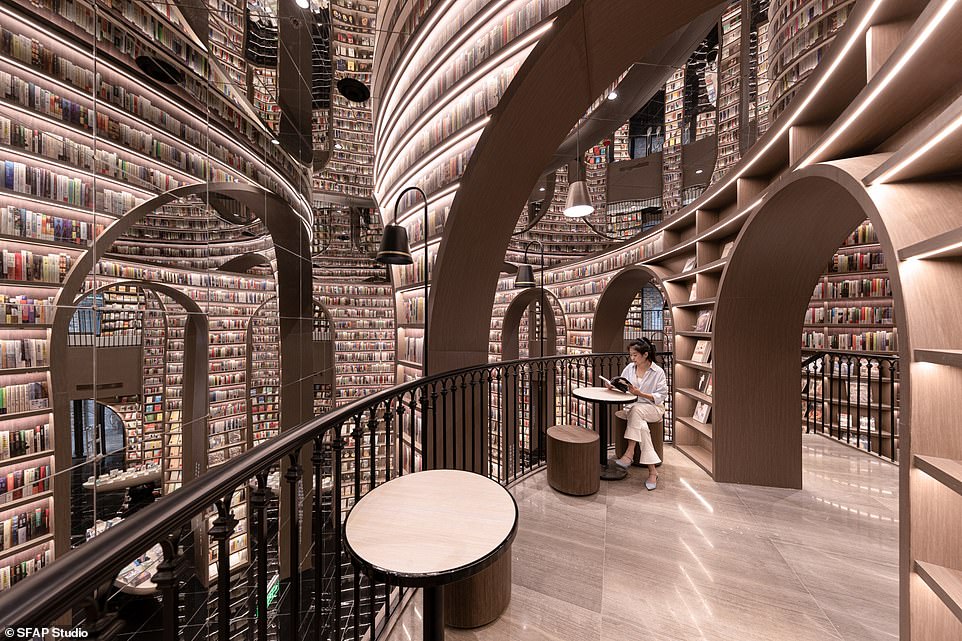 The Dujiangyan Zhongshuge, pictured, is yet another example of X+Living studios’ work – the firm creates spaces with spectacular, awe-inspiring interiors

Zhongshuge bookstores are a chain of bookshops across China, founded by book publisher Jin Hao. Since 2010, X+Living studios has designed over 20 of the chain’s premises, creating spaces with spectacular, awe-inspiring interiors.

In 2016, it unveiled the Zhongshuge Bookstore in Hangzhou, which features mirrored ceilings and an ‘enchanted woodland’ children’s area with tree trunk shelves and huge statues of mushrooms.

Three years later, in 2019, the studio turned its hand to the Zhongshuge store in Chongqing City, using huge mirrors and symmetrical staircases to create a mesmerising design.

It has also designed stores in Ningbo, Beijing, Guiyang, Chengdu and Shanghai.