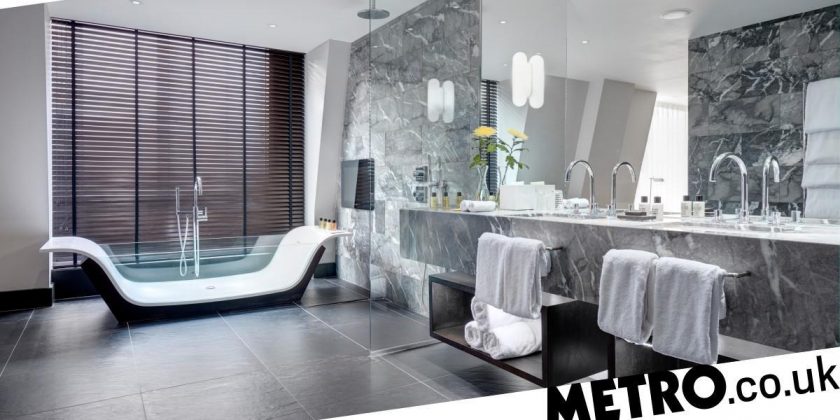 Ah, the ol’ Devil’s dance. Doing the nasty. Hanky panky. Knocking boots. What are we on about, again? Oh yeah, sex.

Let’s face it, hotels were invented for sex. That’s an untold fact. Why do you think extra thread count linens slid into our sheets? Why did Japanese baths suddenly become such a thing? Why are 24 hour do not disturb signs now the norm? You got it? Sex.

If you’ve suddenly become bored of bonking within your own four walls (or on the stairs), our advice is simple: be spontaneous and book a sex weekend. The smile on your faces will be oh so worth it.

‘I can only imagine what interesting places we are going to find the foot when guests check out’” André Balazs, the former owner of The Standard, once told Vanity Fair.

The feet he’s referring to are the giant five feet long, five feet high foam and rubber black ones you’ll find in select guest bathrooms throughout the hotel.

Just in case you’re wondering, the feet are there as a stand in for a bed, should you want to get frisky by the bathtub pre or post champagne dinner fest. Once you’ve tested one out, head for the rooftop for eye popping views of the heart thumping LA skyline.

After, head first for the slide to cool off before a sexy afternoon of naughty fun in the sun.

Welcome to your ultimate mood lit fantasy. The Sixty Beverly Hills Hotels is the master work of celebrated designer and architect Dod Mitchell.

The space is swanky, very swanky and champions a boutique hotel concept that takes mood lighting to the very extreme.

Rooms feature giant and deliciously sexy photographs courtesy of Steven Klein, along with oversized mirrors to eye up your bits, and leather paneled headboards that wrap onto the ceiling. Great linen and a glorious rooftop space, too.

The Standard, The High Line, NYC

This one’s for all you exhibitionists out there. No seriously, there’s literally an app for such peeps who fancy a one night romp at this hotel perched in Manhattan’s trendy Meatpacking District.

The One Night Standard package allows those looking for a good time to book a spontaneous room for a night to give passersby a peep show style performance direct from their window. 24 hour flings and shows are so common that the hotel has received so much negative press, that members of the New York City Council referred to all the things happening at The Standard as ‘unacceptable’.

Whether they like it or not, this is London’s premier sex hotel. It’s conveniently placed near Liverpool Street for all those laddy bankers waiting to get jiggy with their next booty call.

When your hotel already has the word sex in it, you know it’s going to be good.

Sex takes place in cooler than cool abandoned caves that are bathed in the sensual glow of candle light.

Some might find the next door church a bit of a turn off (remember you’re in Italy) but the freestanding bathtubs, sexy stone balconies and rustic fireplaces should be enough to take your mind off the big man upstairs.

Let’s face it, having sex in the bush is a bit of a turn on. You, them and mother nature. What’s not to love?

One of the best wilderness retreats lies in the heartlands of South Africa’s stunning Western Cape, Bushmans Kloof Wilderness Reserve.

If you’re on your honeymoon, the place has your name on it and is an ideal spot top unwind in after exploring nearby Cape Town.

Rooms are colonial in style and really do set the mood: private patios look on to very pretty botanical gardens, spacious en-suites bathrooms are great for a little bit of spontaneous hanky panky and the wood burning fireplaces have couple goals written all over it.

A side-by-side couples massage is also a must.

Mirrored ceilings, peekaboo showers and Saint and Sinner mini bar amenities – you guessed it, this one’s in Vegas, baby.

SLS Las Vegas resort and casino is one big giant homage to sin. Here you gamble, riot and play, and not a single soul will bat an eyelid.

If someone suddenly slides into your DMs, or eagerly messages you on your fav dating app, and you desperately find yourself wanting to shag them senseless, check into the The Hoxton, Holborn.

They do day rates for under a hundred quid where guests can have a room from 10 to 4. What you do in there is totally up to you, but the queen-size beds and walk in showers might just be enough to persuade you to fire up that pre-charged rampant rabbit.

Who wouldn’t want to have sex with the sparkles of the Aegean in the background?

These Whitewashed Santorini suites offer such steamy opps from the comfort of your very own private sea-facing jacuzzis.

The cave rooms are the best which boast views from pretty much every room in the apartment. Sex with a view? Aphrodite would be so proud.

This Californian beauty is adults only, and for good reason.

Rustic chic bedrooms have been designed to cozy up to your love – think deep soaking tubs and hammocks in front of the river – and there’s a spa pool that was so designed for a bit of after hours skinny dipping.

Wine catch ups are a right of passage here, as are the yoga classes, which, if you’re travelling solo, might just prove quite useful if you’re looking for Mr or Mrs right.