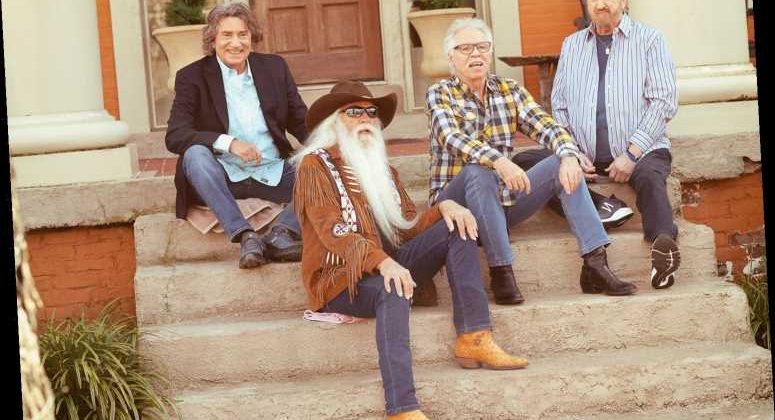 As a cold January wind whipped across the countryside, the men of The Oak Ridge Boys assembled on a front porch tucked back in the woods for a scheduled photo shoot. But as the Grammy Award-winning group stoically posed for the camera like they had done so many times before, the photographer seemed to notice that something was missing.

These guys needed to sing.

"We just started singing 'Swing Down Chariot,' right there on the front porch," The Oak Ridge Boys' Joe Bonsall remembers in a recent interview with PEOPLE, mere hours after receiving his second COVID-19 vaccination. "Just hearing the four of us singing together? Well, it was emotional. I almost cried."

Bonsall stops to rethink his last statement. "Actually, I think I did." And rightfully so. For over 45 years, the legendary country group made up of Bonsall, Duane Allen, William Lee Golden and Richard Sterban have made a career out of performing on the road for their loyal legions of fans. But last March, the pandemic stopped them in their tracks.

"We did a big show in Myrtle Beach on March 14 of last year," Bonsall remembers. "We got home the next morning and parked the bus, and it stayed parked. I mean, that had never happened before. Never."

In fact, the group's trusty tour bus would stay parked for the majority of 2020. Nevertheless, the group who are currently celebrating the 40th anniversary of their iconic hit "Elvira" made the conscious decision to put their unexpected time off to good use, heading into the studio in August to begin recording their brand-new album Front Porch Singin'.

"It took a couple of weeks to record," Bonsall says of the socially distanced sessions for the album that is set for release June 11. "[Producer] Dave Cobb wanted us to get back to some front porch singing, and that's exactly what we did. We had this front porch attitude, whether we were singing old gospel and old country, or new gospel and new country. I really think if you listen to those songs that we inadvertently recorded the perfect album for the days we are living in."

One of the stunning standouts on the album is undoubtedly "Love, Light and Healing," a lyrical blanket for the hurting soul, premiering exclusively Thursday on PEOPLE.

"We just wanted to do that chorus strong," remembers Bonsall of the recording of the song. "It fits so well right now. It's about reminding people that life is beautiful and marvelous. Home, family, faith – it's all still there. Let's sing about it. Let's feel it. Hang on. Everything is ok." And while Bonsall's upbeat attitude and unrelenting faith stays strong despite the chaos of the past year, he is the first to admit that these days haven't been easy for anyone. Luckily, after being off the road most of 2020, the Country Music Hall of Fame members were given the opportunity to perform a socially distanced run of holiday shows at Nashville's Gaylord Opryland Resort this past December, just when they and their team needed it the most.

"We played each night for an hour and 15 minutes, and then I was back in my truck and home before 9 p.m.," remembers Bonsall. "We made some money and paid all of our people and paid some back bills. It was just a godsend." Another godsend has been the fact that COVID-19 has yet to even swipe at the good health enjoyed by each of its members. While Golden did battle a flu last January where he "went down hard," Bonsall is the first to admit that Golden "might be the oldest, but he is the strongest."

And yes, their collective voices continue to stand the test of time, even though Bonsall admits that some notes are getting a little tough to reach. "We had a song called 'Little Things' back in the '80s, and I can't do 'Little Things' worth a crap anymore," Bonsall says with a laugh. "I ain't got it. It ain't there! But when the four of us join our voices together, there is still magic. There is still something there to grab a hold of. That's probably why we are still around, to be honest."