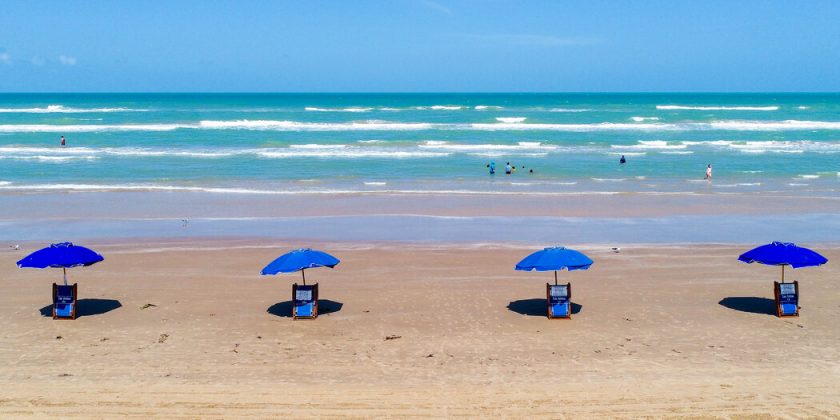 Last year, Covid-19 crashed the spring break party, but not before mass gatherings on the beaches of Florida, Texas and Mexico flouted travel warnings and social-distancing advice. Ski areas had to shut down during one of the busiest periods of the season. Student trips for enrichment and sport were suddenly canceled.

Now, a year later, spring break is showing signs of life again, albeit in very different forms than the past.

“We don’t want to see a repeat of last year,” said Steve Hayes, president and chief executive of Visit St. Pete/Clearwater, which promotes tourism in that Gulf Coast area, where crowds jammed the beaches last spring. “What we want is a picture that says, what a difference a year makes.”

Stricter limits on group gatherings, mask mandates and restrictions at hotels, restaurants and bars in popular spring destinations diminish the odds of a repeat.

Virtual classrooms and workplaces have freed some students and families from the traditional spring-break schedule, a shift that may dilute 2021 traffic. This trend is already showing up in some ski areas that rely on visitors who drive there, like Lutsen Mountains in northern Minnesota, where weekday skier visits have doubled this year.

With colleges shrinking spring break and the arrival of the vaccine, largely prioritized to older Americans, the 2021 spring breaker may be significantly older than the stereotyped one.

“At least in 2021, I think we’ll see more seniors as spring breakers as they are the first to have access to the vaccine and by March and April they’ll have the second dose,” said Joel Holland, the chief executive of Harvest Hosts, a membership platform that offers R.V. camping spots in nontraditional settings, such as breweries and farms. Of 3,000 members aged 65 and older recently surveyed, about three-quarters said they planned to travel more this year than last and almost 58 percent said they planned to travel more in 2021 than in pre-pandemic 2019.

Whether senior or college-age, spring break will be quieter this year. The seasonal escape “is pivoting to domestic drive markets, private vacation rentals or nothing at all,” said Erika Richter, the senior communications director for the American Society of Travel Advisors, noting that multi-generational family trips are trending.

The seasonal itch to travel, of course, runs headlong into advice from the Centers for Disease Control and Prevention to postpone travel in order to avoid contracting or spreading Covid-19.

“My first inclination is to say please stay put given the transmission rates and different variants of the virus that are circulating,” said Dr. Darlene Bhavnani, an associate professor and infectious disease epidemiologist at Dell Medical School at the University of Texas at Austin.

For those bent on traveling, she added, “a safer way would be not to stray too far from home, travel with those in your household, keep it to a car ride” and consider renting an Airbnb or camping.

From testing protocols and travel affidavits to uncrowded beaches and bird-watching blinds with capacity caps, here’s how spring break may look in 2021.

From raucous weeks to recovery days

Many colleges and universities have crimped spring break this year. Boston College delayed the start of spring semester to late January and canceled its scheduled spring break week in March, offering a midweek day off on March 3. The University of Michigan eliminated its spring break and added two “well-being break” days during the winter term. Throughout the current semester, students residing at Yale University must seek permission to travel outside the greater New Haven, Conn., area for more than 24 hours and will have five individual days off between February and April.

Even institutions in break-centric Florida, including the University of Miami and Florida State University, have canceled spring break.

“I think they are eager to redress some of the impressions last year when students were going wild,” said Lynn Pasquerella, the president of the Association of American Colleges & Universities. “As we saw after last year’s spring break, Miami became an epicenter for Covid-19 and the people who were dying were not college students, but the elderly and those most vulnerable.”

The shift has not gone over well on some campuses, including the University of Arizona and San Diego State University where online petitions decried the cancellations.

“What concerns me is mental health,” said Khanitha Soeung, 19, a mechanical engineering major at S.D.S.U. from Long Beach, Calif., who started a petition to restore spring break that has more than 16,000 signatures. With all classes online and a couple of part-time jobs, she added, “I’m already burned out and it’s week two or three.”

Petitions have not swayed administrators and many students express resignation.

“I’d prefer not having spring break and everyone going out and contracting Covid and having a big spike on campus,” said Holly Abrams, 19, a sophomore from Montclair, N.J., who is majoring in neuroscience at the University of Vermont, where spring break is canceled. Though she’d rather be traveling, over her scheduled days off she plans to ski in the area “or catch up on sleep.”

For those college students who still have the opportunity to travel, many popular destinations have made it clear that mass gatherings are not welcome.

In Los Cabos, Mexico, beaches are limited to 40 percent capacity by police, nightclubs remain shuttered and a midnight curfew extends to restaurants and bars in towns as well as in resorts.

On South Padre Island, Texas, no permits for stages and activities have been issued. Groups are limited to 10 and beach umbrellas must be spaced 15 feet apart with only two chairs.

“We are calling it ‘coastal distancing’ with our sunshine, wind and water being a natural way to keep families in their own bubble,” said Ed Caum, the director of the island’s convention and visitor’s bureau, in written responses to questions.

And it’s not just beach destinations that aim to quell the party. This month, the Colorado Tourism Office launched a safe-travel campaign targeted to 18-to-25-year-olds, introducing celebrities and influencers who espouse ditching high-risk behaviors in order to “Do Colorado Right.”

The campaign features Olympic gold medalist snowboarder Red Gerard, whose message is “Shred, don’t spread. Stay six feet apart, even outside,” and Ben Higgins, a former star of “The Bachelor,” sharing safe dating practices, such as “Love isn’t all that’s in the air, wear a mask.”

Spring bookings in domestic destinations like Colorado may benefit from new testing requirements for American travelers returning from abroad. Since the new rules were announced, Isla Bella Beach Resort in the Florida Keys reported getting 20 reservations from one travel agent alone, who moved the bookings, mostly for February and March, from Jamaica.

Testing isn’t just for the Cancún-bound. In places like Chicago and Maine, a negative Covid-19 test before arrival enables visitors from most states to skip quarantines.

Pitkin County, Colo., home to Aspen and four major ski areas, has a Traveler Affidavit that requires most overnight visitors to receive a negative Covid-19 test three days before arrival in lieu of a 10-day quarantine. Since implementing the system in mid-December, the county has received nearly 60,000 affidavits.

For some, the restrictions make the destination more attractive.

“I’m very comfortable with the testing requirement because I feel if someone is willing to take a test to go on vacation, they’re more likely to abide by the rules that are in place to keep us safe when we’re out there,” such as masking and social distancing, said Juliette Goldstein, 45, a personal trainer based in Chicago, who is planning a family spring break in Aspen.

You don’t have to stray far

Mental health experts stress that you don’t have to stray far from home to gain from taking a break.

“The benefits of seeing something different, of taking a break from the usual responsibilities and routines, stimulates thinking and creativity, and gives us a fresh new perspective on what we face in day-to-day life,” said Lynn Bufka, a psychologist and senior director at the American Psychological Association.

One way to do that this spring is to learn a new skill. Recreational classes range from latte-art making lessons at Coffee Project New York in New York City ($110) to learning to ice climb with your Covid pod with the nonprofit outdoor education organization Rippleffect based in Portland, Maine ($100 a person for groups of four or more).

Staycation offers abound this spring, from the Hotel Kansas City in Kansas City, Mo., which will throw in a bottle of local bourbon, a $25 food and beverage credit and 2 p.m. late check out (from $219), to the YOTEL Boston, which will include passes to the Boston Children’s Museum for the whole family, milk and cookies and a plush toy (from $150).

In the pandemic, vacation home rentals, which offer privacy and control, have been popular. At Homes & Villas by Marriott International, current bookings from early March through mid-April are triple compared to last year at this time.

If the idea of renting a home or cabin appeals, take that thought thematic. For history buffs, for example, the Chesapeake & Ohio Canal National Historical Park, which runs 184.5 miles from Washington, D.C., to Cumberland, Md., along the Potomac River rents its vintage lockhouses (from $110 a night).

Indulge your astronomical curiosity at the Herkimer Diamond KOA Resort campground in upstate Herkimer, N.Y., which offers two rental homes each with their own private observatories (around $236 a night).

Or play out your farmer fantasies and rent a three-bedroom loft on Buck Brook Alpacas farm in the Catskill Mountains of New York (from $225).

In the pandemic, Americans have seized on road trips and camping as safe forms of travel — the travel search engine Kayak said flight searches for March are down 76 percent year over year. Campspot, a platform for booking campgrounds and R.V. sites, glamping tents and cabins, said reservations are up 50 percent over last year to date.

Spring breaks on the ground offer opportunities to fully explore seasonal renewal beyond the famed cherry blossoms in Washington, D.C. (its annual festival March 20 to April 11 will be adjusted for safety, including no parade). About 150 miles northwest of Los Angeles, a seasonal explosion of orange poppies and lavender lupine paint the nearly 250,000-acre grassland preserve Carizzo Plain National Monument (there is camping in the park, or accommodations from $139 at the 21-room Cuyama Buckhorn resort in New Cuyama).

Spring is also a season of bird migrations. In central Nebraska every March and early April, more than 600,000 sandhill cranes regularly convene in the Platte River Valley. There are virtual tours as well as in-person visits to viewing blinds with restrictions this year that include reduced capacity ($50 a person, reservations required).

Look for migrations of shorebirds in the Bosque del Apache National Wildlife Refuge in southern New Mexico. Some 500 species have been recorded in the nine sites that comprise the World Birding Center in the Rio Grande Valley of South Texas. Waterbirds, raptors and warblers are among the great diversity of birds migrating through the Point Reyes National Seashore, about 40 miles north of San Francisco.

For those with just a day off, a public mural tour combines culture and outdoor recreation. Wynwood Walls in Miami, featuring over 80,000 square feet of artwork by Shepard Fairey and other well-known artists in the genre, went to timed admission ($5 to $10) during the pandemic as a way to control capacity.

Denver’s walkable RiNo district is festooned with murals. In New York City, take a socially distanced, three-hour private guided tour of the street art and its role in gentrification in Dumbo and Bushwick with Levy’s Unique New York ($300).

Whether it’s a trip of a day or a week, caution is the theme of spring break 2021.

“For travelers, the experience will be totally different,” said Rodrigo Esponda, the managing director of the Los Cabos Tourism Board, which wants to be known for its safety protocols this year, rather than its parties.