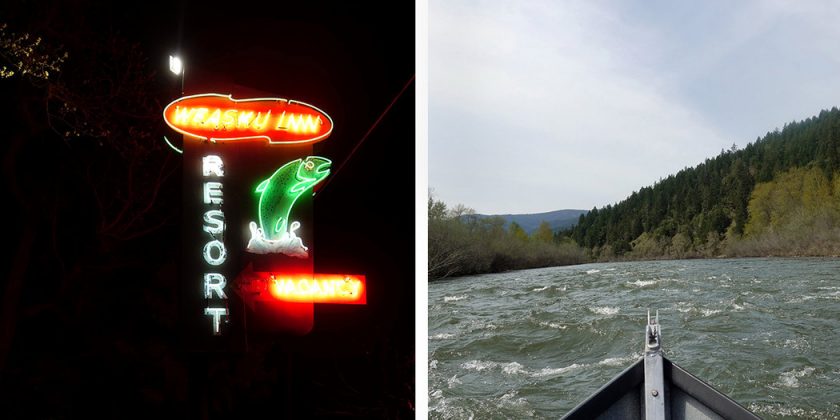 Like any globe-trotter, Jada has learned a lot of lessons on how to travel — the easy way, the hard way and, occasionally, in a different language. She’s also been given advice from fellow travelers, proud natives, and followers and fans across social media.

Before her trip to the Rogue River in Oregon, Jada asked Twitter followers what she couldn’t miss in the area. Followers responded with recommendations for caramels, road trips, hikes and sausages.

She followed the advice of many, and also had her own recommendations.

“When you do eat, though, make sure it involves blue cheese,” Jada said of her time in Oregon. The creamery she went to was recommended by a Twitter user, Katie D.: “Rogue Creamery has won awards for that moldy goodness, and a farm stand on its dairy in Grants Pass served a grilled cheese sandwich made of Oregon blue cheese, a type of mild Cheddar called TouVelle, and honey, on locally made white bread basted with grape seed oil, that I’d commemorate in song if I could.”

“Even more indelible was Jasper’s Café in Medford, a roadside burger joint near the airport,” Jada wrote. The cafe was another recommendation from Katie D. “I craved it every day I was in Oregon — and was nearly late to my flight getting another one on the way out.”

For many, the 52 Places traveler position is a dream job. For Jada, that dream, while not always totally dreamy, is a daily reality. And in that reality, you sometimes land in a hotel where there’s ice cream for breakfast.

In Prague, she tweeted the following:

Some readers had a few things to say about ice cream. In Cincinnati, the consensus was clear: Go to Graeter’s, they said. And get the blackberry chip — in a pretzel cone.

And when someone suggests a chocolate factory, never, ever, say no.

It goes without saying that when you’re traveling the world for a year, there will be some high highs and low lows.

When Jada’s car was stuck in the mud on a remote beach in São Tomé — with no cell service, to boot — the following happened:

“This,” her guide, Juliano, said, “is just part of the São Tomé culture; no one would ever leave anyone stranded.”

In Lucerne, Switzerland, Jada faced a different kind of crisis: a lost bag with her laptop inside. “My hotel desk clerk said not to worry; Swiss people return things they find,” she writes in this Instagram caption.

The next morning, she woke up to a direct message on Twitter from a man named Anton. “Hi Jada Yuan, please contact me if you lost something,” he wrote.

Anton was in Jada’s hotel lobby — with her bag — 10 minutes later.

A few months later in Fiji, Jada was tasked with voting in the U.S. midterm elections from the South Pacific, about 8,000 miles away. She credits a team of locals — from hotel staff to newfound friends — for helping her ballot make it back to New York City.

In June, Jada answered many questions about her packing strategy. “Blogs, travel writers, foreign correspondent friends, and flight attendants all gave me great advice, but the past five months of hopscotching through climates and national borders have been figuring out what works for me, with trial — and a ton of error,” she writes.

She shared a handful of her own tips and her biggest concern: “What happens when I get my period?” she asked. Tampons — and Duane Reades — aren’t everywhere, and that includes the African bush:

Because why have a neck pillow when you could have an animal neck pillow, as spotted in the Cincinnati/Northern Kentucky International airport?

Listen to the chef

While traveling in Bolivia, Jada ate at Gustu, a restaurant in La Paz, Bolivia. Perhaps the most important advice in a restaurant comes from the chef. In this case, the advice was: Eat it. Jada held the hand of the co-head chef, Marsia Taha Mohamed, while taking a bite of a queen ant taco. “Smoky and crunchy,” she wrote.

“This Gustu tasting menu had at least 3 other proteins I’ve never tried (oxtails, beef hearts, and alligator ceviche). I won’t eat any of them again, but once seemed worth it.”

Nothing against chefs, but bus drivers also have some good advice (if unintentional):