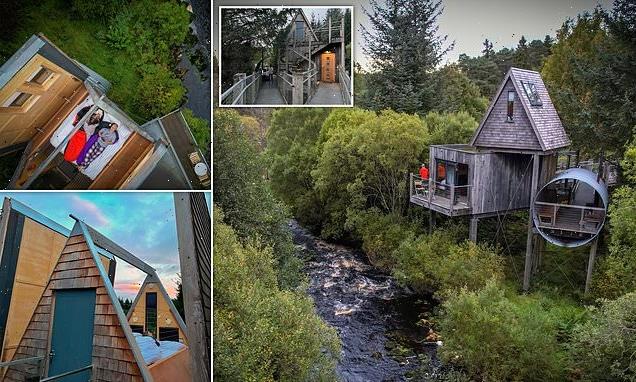 A heavenly stay at the bedroom-on-stilts in Northumberland that was featured on George Clarke’s Amazing Spaces, offering guests stellar night-time views in a stunning Dark Sky Park

Pressing a big green button while snuggling down into a duvet with the love of my life might suggest to you that I’m getting ready for some serious bedroom fun, and you’d be right.

The button operates hydraulics that cleave apart a lofty roof revealing, above the double bed, the inky black Northumbrian sky and the sort of starscape it’s now impossible to view in light-polluted cities.

We’re in a bedroom on stilts, the highest part of the Sky Den, a £180-a-night three-part cabin/treehouse combo designed in 2013 by cubbyhole connoisseur George Clarke. This celestial-focussed self-catering property featured in the second series of the Channel 4 programme George Clarke’s Amazing Spaces. 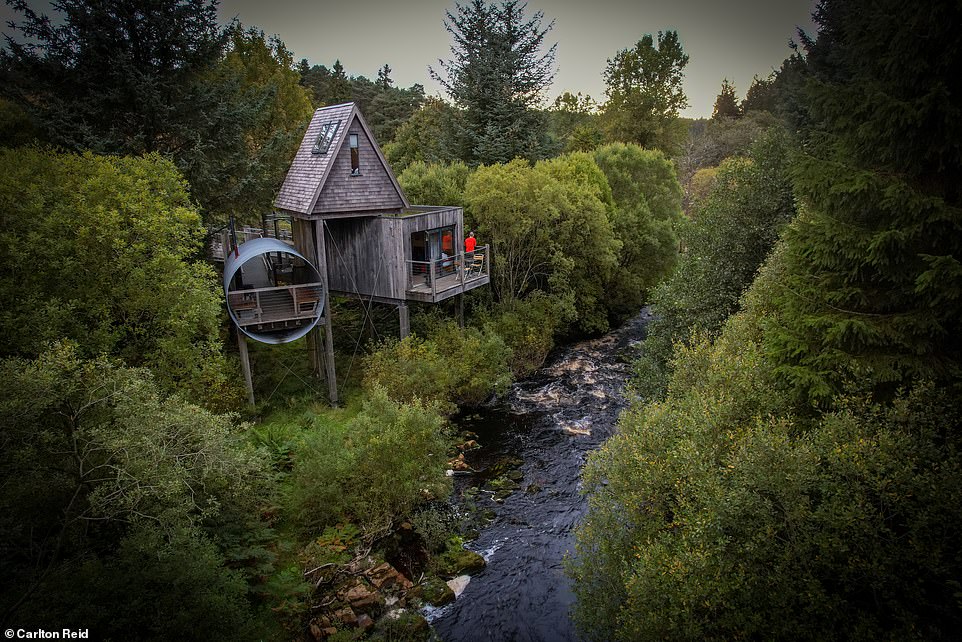 The Sky Den, a £180-a-night three-part cabin/treehouse combo designed in 2013 by cubbyhole connoisseur George Clarke. It’s composed of three distinct shapes, a circle, a square, and a triangle 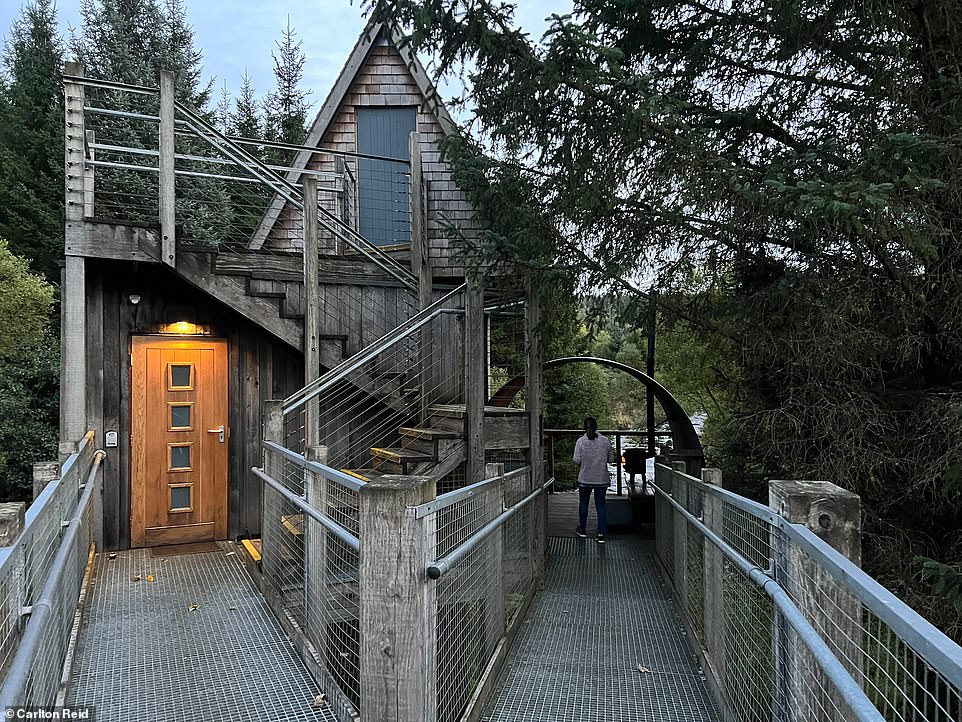 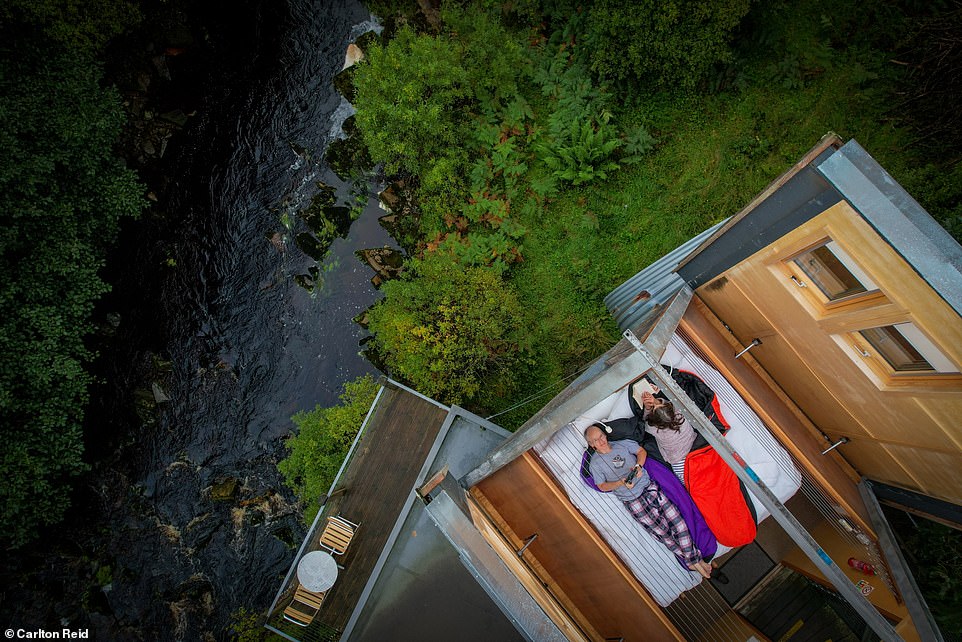 Up, up and away: Carlton launches his drone from duvet level in the Sky Den bedroom 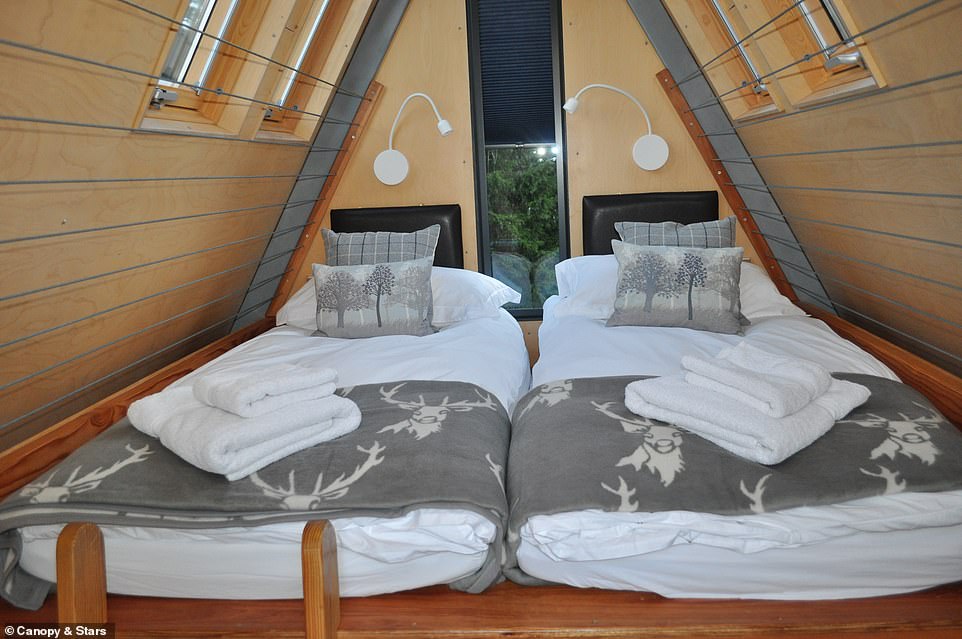 The bedroom pod pokes into the trees, almost 20 metres (65ft) above a noisy burn, a tributary of the North Tyne

If any eco-conscious, small-is-beautiful James Bond baddies of the future ever fashion themselves a micro lair, they could do worse than mimic the Sky Den’s roof-cracking design: it’s simply astounding.

Perched above the burbling Cranecleugh burn on the forest campus of outdoor activities charity the Calvert Trust, the Sky Den was built to take advantage of the literally stellar night-time views in Europe’s largest Gold Tier Dark Sky Park. This astronomy-based designation for the Kielder Water and Forest Park – shared jointly with Northumberland National Park – was awarded by the International Dark Skies Association.

The Sky Den is composed of three distinct shapes, a circle, a square, and a triangle. Unlike in the blockbuster Netflix series Squid Game, the shapes don’t signify anything other than Mr Clarke’s desire for geometrical symmetry.

The bedroom pod, with the roof closed, is the triangle and is the highest part, poking into the trees, almost 20 metres (65ft) above the noisy burn, a tributary of the North Tyne. 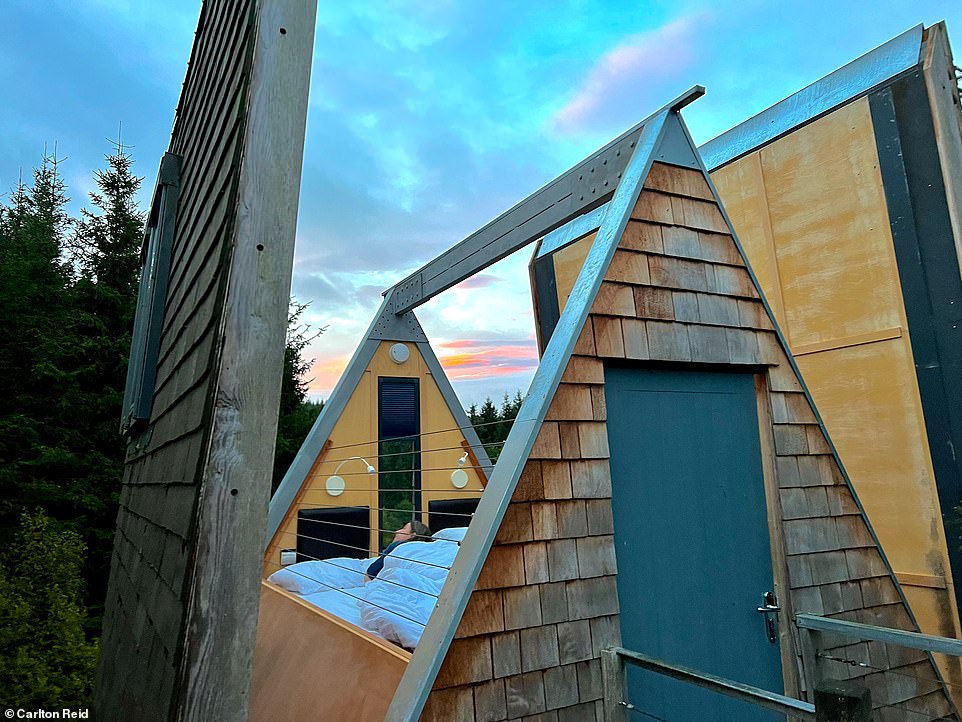 Waking up to a Sky Den sunrise. The Sky Den’s bedroom has space only for a double bed 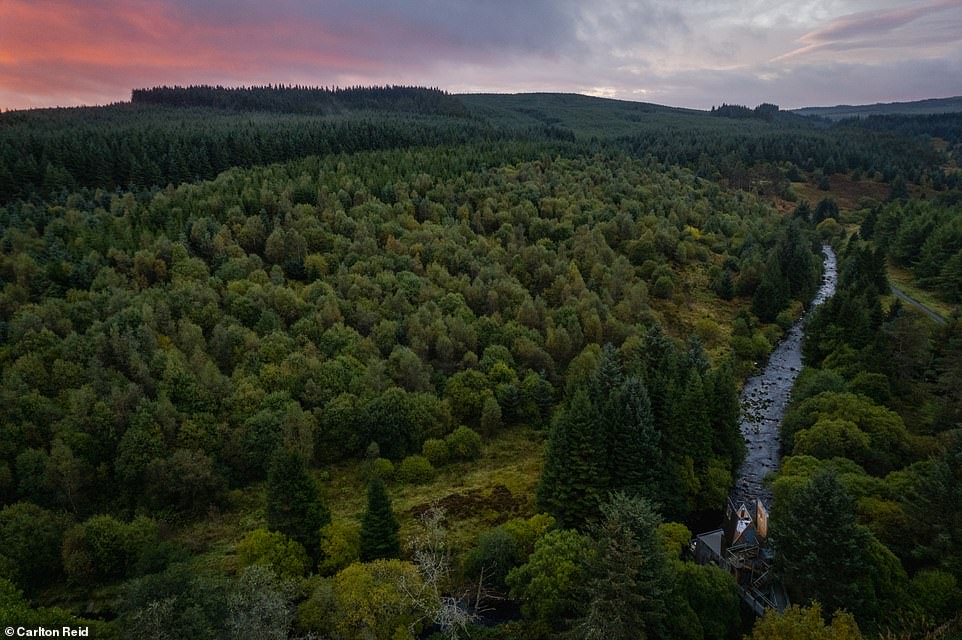 If any eco-conscious, small-is-beautiful James Bond baddies of the future ever fashion themselves a micro lair, they could do worse than mimic the Sky Den’s astounding roof-cracking design, says Carlton 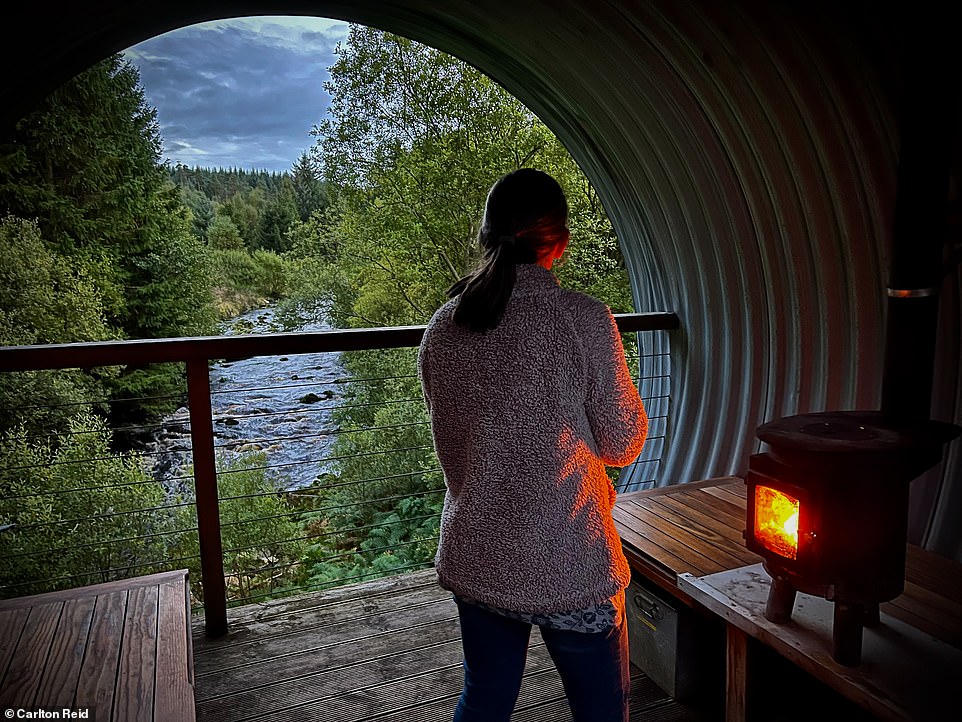 The Sky Den’s bedroom has space only for a double bed, and the main living space is also on the small side, although the glass doors can be folded away concertina-style to bring in the outdoors.

Despite the stingy footprint, the Sky Den can comfortably sleep four people, two in the upper pod, accessed by open-to-the-elements steps, and another two in single wooden beds that fold out from wooden walls.

The living space is sparse when you enter, and it’s an intelligence test to work out how to construct the stools, slide out the dining room table or fold-out a wall to partition the living space from the kitchen. 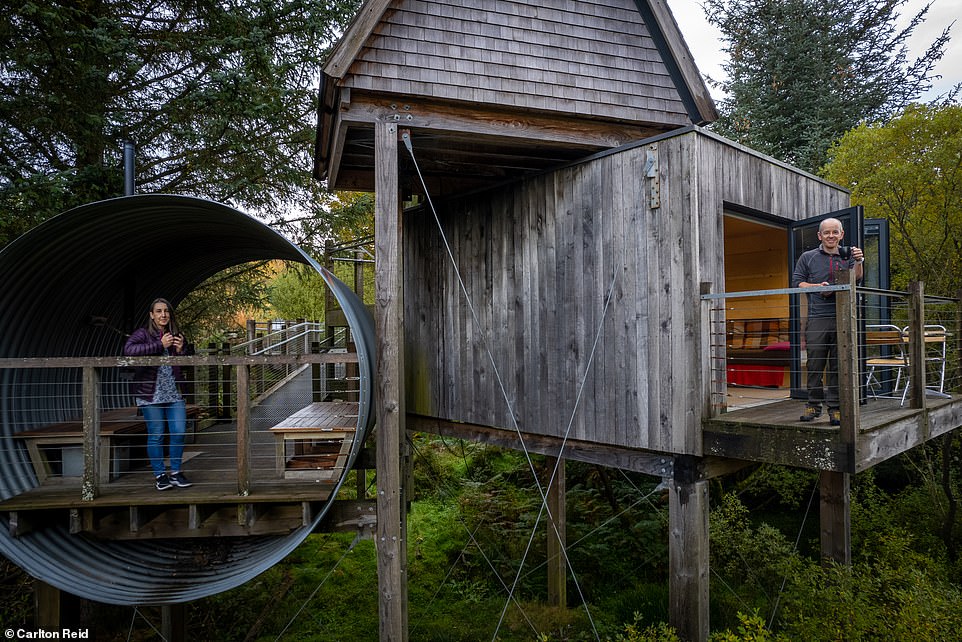 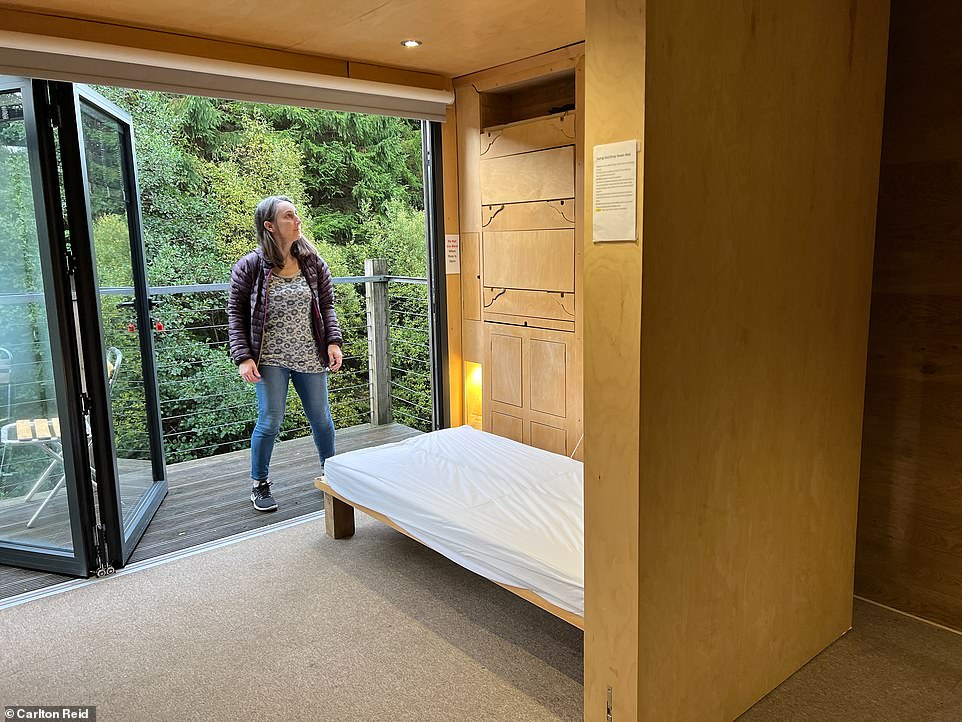 The Sky Den can comfortably sleep four people, two in the upper pod, and another two in single wooden beds that fold out from wooden walls (pictured) 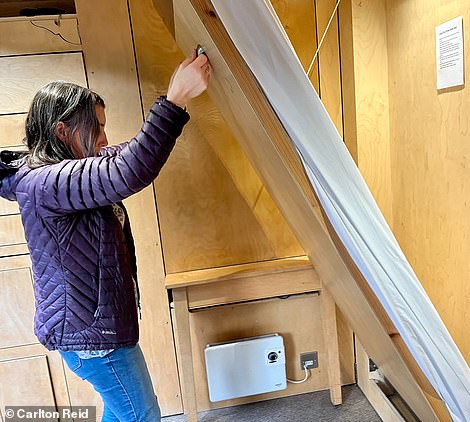 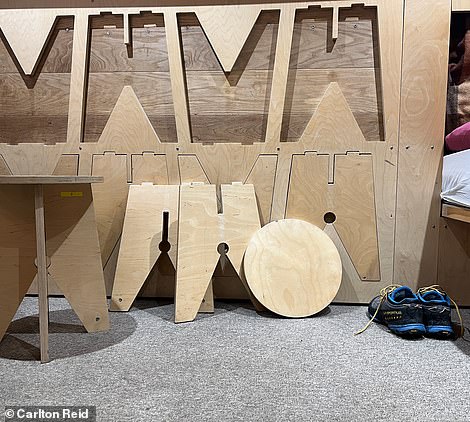 Carlton’s wife, Jude, is pictured left checking out the fold-down bed. Pictured right are the parts for the Sky Den’s stools, embedded in the walls

Parts for the stools are embedded in the walls, held in place by latches, and there are pop-out draws and notches that store the usual self-catering nick-knacks. (We didn’t happen upon the space hiding the gin glasses until we tidied before leaving – gin and tonic, however, tastes fine from mugs.)

The focus for those staying in the Sky Den is viewing the heavens, but we also cracked open the roof one morning to catch a few precious minutes of sunrise before clouds came rolling in. The vista from the duvet was – briefly – remarkable, but I extended the experience by launching my drone from the bed. While the red and gold sunrise was soon finished in the bedroom, I was able to chase after it with my eye-in-the-sky.

Via my iPhone screen, tethered to the drone, I could see Kielder Water off in the distance, bobbing boats silhouetted against a pinkish-purple sheet of water. (Kielder Water is Northern Europe’s largest artificial lake, created in 1981 by flooding a remote valley close to the border between Scotland and England.) 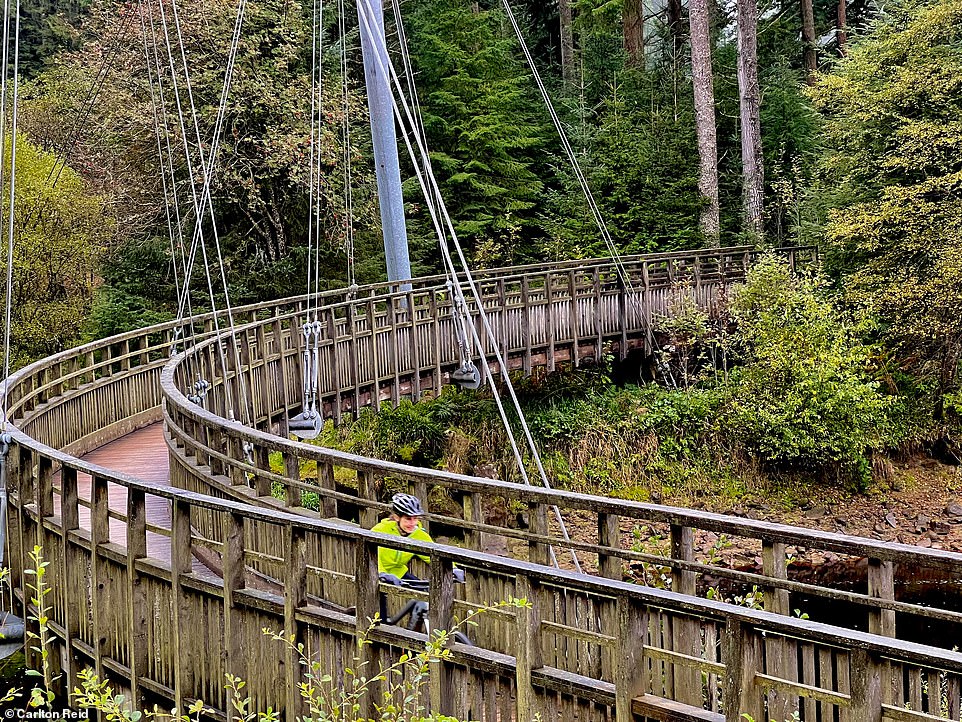 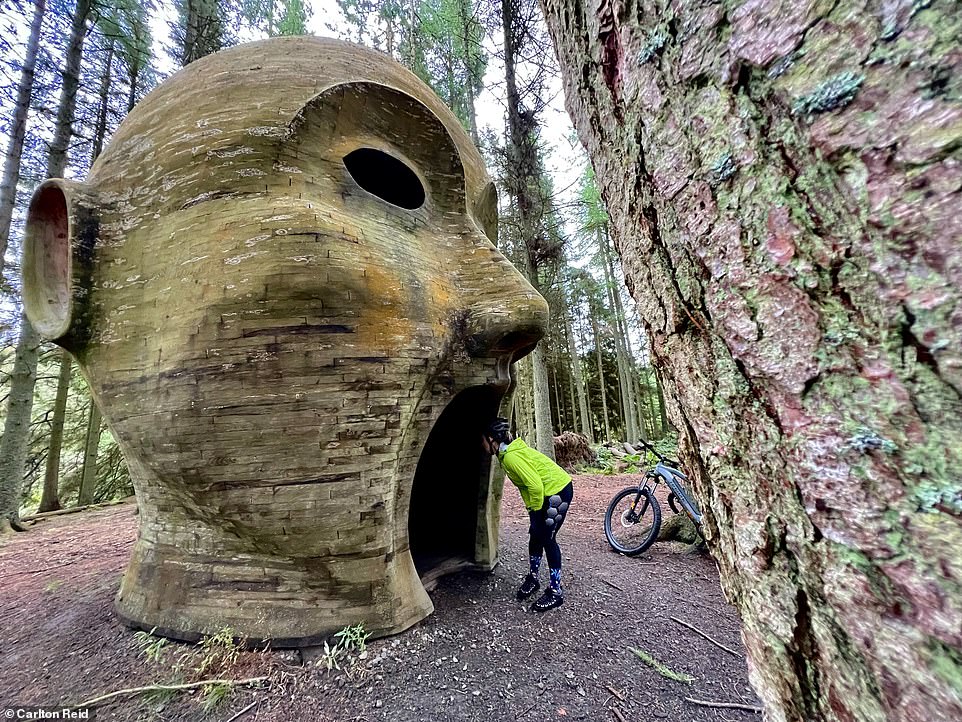 Kielder Water’s sculpture trail features Silvas Capitalis (a play on the Latin for ‘forest head’). The head has been conceived as a watcher, an imagined presence who has observed the passing occupation of the landscape over past millennia and how the environment has dramatically changed during the last one hundred years 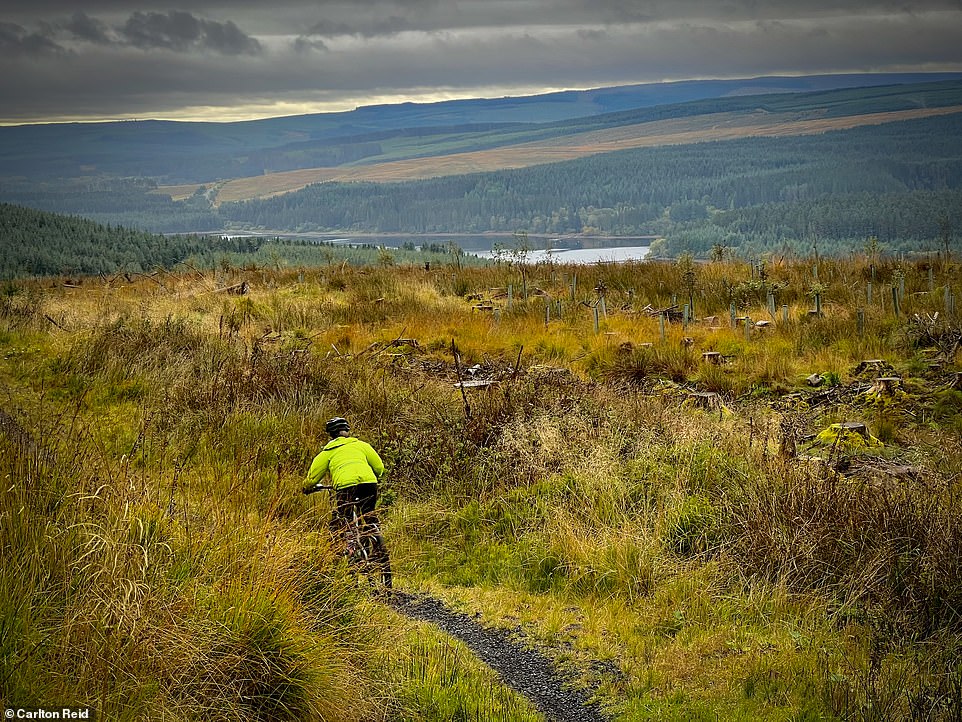 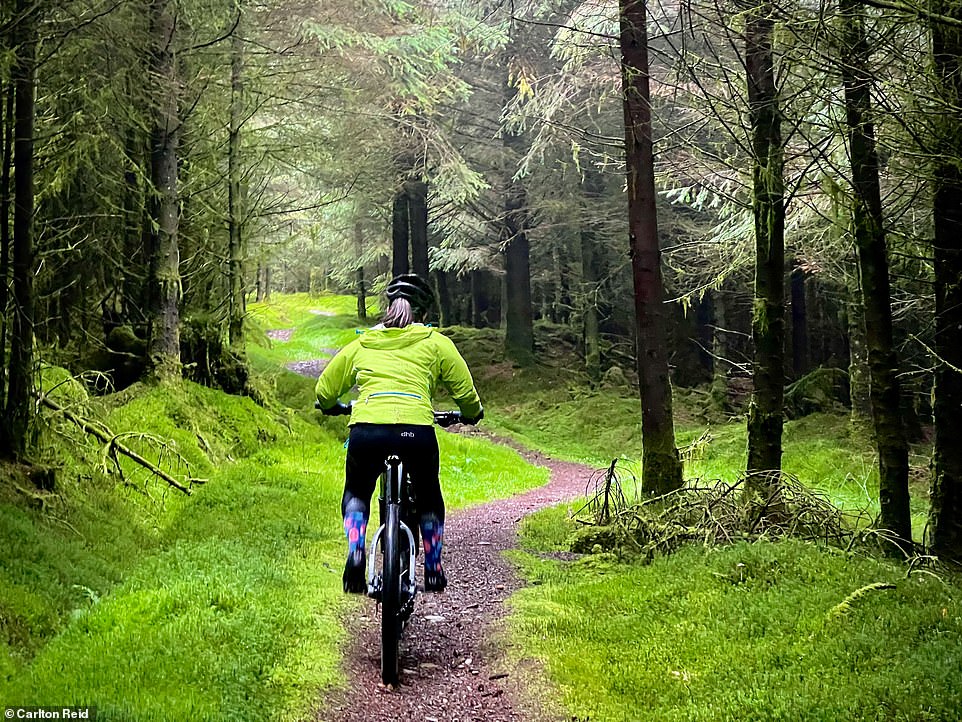 Lush landscape: Kielder gets lots of rain, so the forest is gloriously green 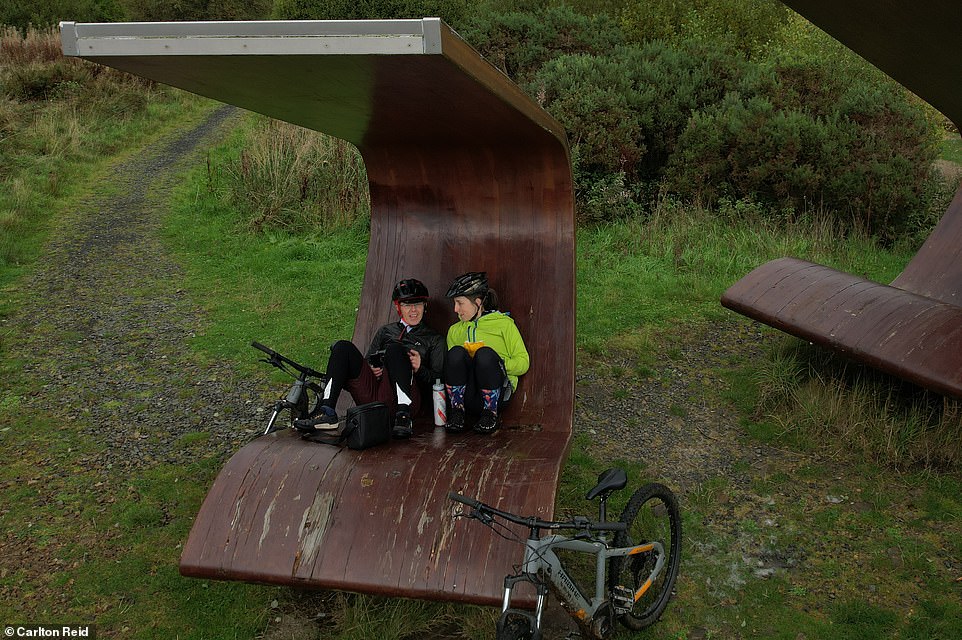 Carlton and Jude are pictured here in one of the Janus Chairs. These are made from laminated Douglas fir from the Scottish borders, with polished stainless-steel backs, the three one-piece chairs – approximately three metres high and one metre wide – can be rotated or moved around

Later that day, we rode beside the lake, following the 28-mile waterside trail. We had hired electric mountain bikes from The Bike Place beside the 18th Century Kielder Castle, a former hunting lodge.

We detoured through the woods following the Osprey trail, an undulating mountain bike track for intermediate riders. (A small population of ospreys nest in the forest, which is also home to half of England’s native red squirrels.)

Back at the waterside, we explored the many sculptures that dot the lake. On the drive back to our treehouse/cabin combo, we passed the dirt road to Kielder Observatory, but we decided to give it a miss – we could pop open the Sky Den’s roof and stargaze at our leisure.

The Sky Den is a holiday let owned by Calvert Trust at Kielder. It costs £180 per night, via Canopy and Stars, and is usually booked out many months ahead. Because of this popularity, there’s probably little incentive – or time – for the charity to renovate the property. Still, it could do with a spruce up, removing mould from the roof space, and giving the whole property a much-needed deep clean. The campus – which has a high ropes course and a roller coaster-style zipwire track – houses nine other self-catering log chalets, including the five-star Straker Chalet.