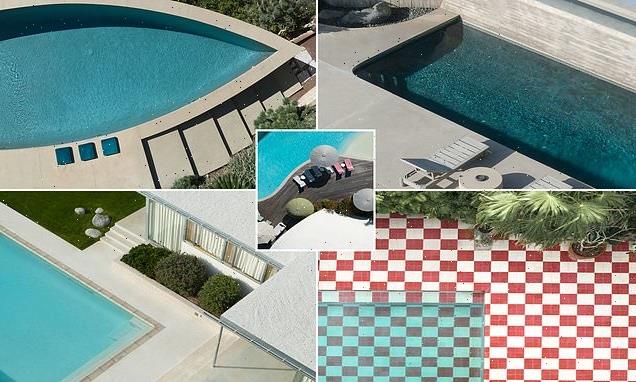 We all know that looking at pictures of pools is almost as satisfying as being in them – and photographer Brad Walls underscores this notion in some style.

His captivating new book Pools From Above, published by Smith Street Books and Abrams & Chronicle, features 89 aerial images of heavenly pools across Australia, the U.S and Mexico – narrowed down from the staggering 1,000 pools that he has photographed overall.

Speaking to MailOnline Travel, Walls, 30, reveals that he first became interested in photographing pools when he was travelling and would capture ‘bodies of water’ as a way to document his memories of the trip. The idea grew from there. The photographer, who hails from Sydney, Australia, says that it’s the ‘less-appreciated elements’ of swimming pools that he fell in love with – ‘their curves, sharp edges, diverse blue hues and the way elongated shadows play against their surfaces’. These qualities are ‘lost’ unless the pool is viewed from above, he suggests.

He reveals that he used two techniques to track down the pools that he photographed in the tome. Firstly, he reached out to a list of owners and architects of houses that he’d ‘admired for their pool architecture’, and secondly, he enlisted the help of Google Maps to identify dense areas of ‘aesthetically-pleasing pools’. Once he was on the grounds of the properties, Walls used a drone to take bird’s-eye-view shots of the pool from about 10m (33ft) to 20m (66ft) in the air.

Reflecting on what he learned from the experience, Walls says: ‘As much as I’m drawn to their visual features, I’ve come to learn that pools have distinct personalities – some evoking a sense of tranquillity, others a more solemn feeling. Pools, often appreciated merely as architectural objects, retain an innate ability to trigger involuntary memories. For me, they can evoke the smell of my favourite food, or resurrect memories of my favourite holidays.’

Below are 18 of the mesmerising aerial shots of pools that appear in the book, from one owned by Robert Downey Jr to examples that appeared in hit Hollywood films, and swimming pools that have been masterminded by world-famous architects… 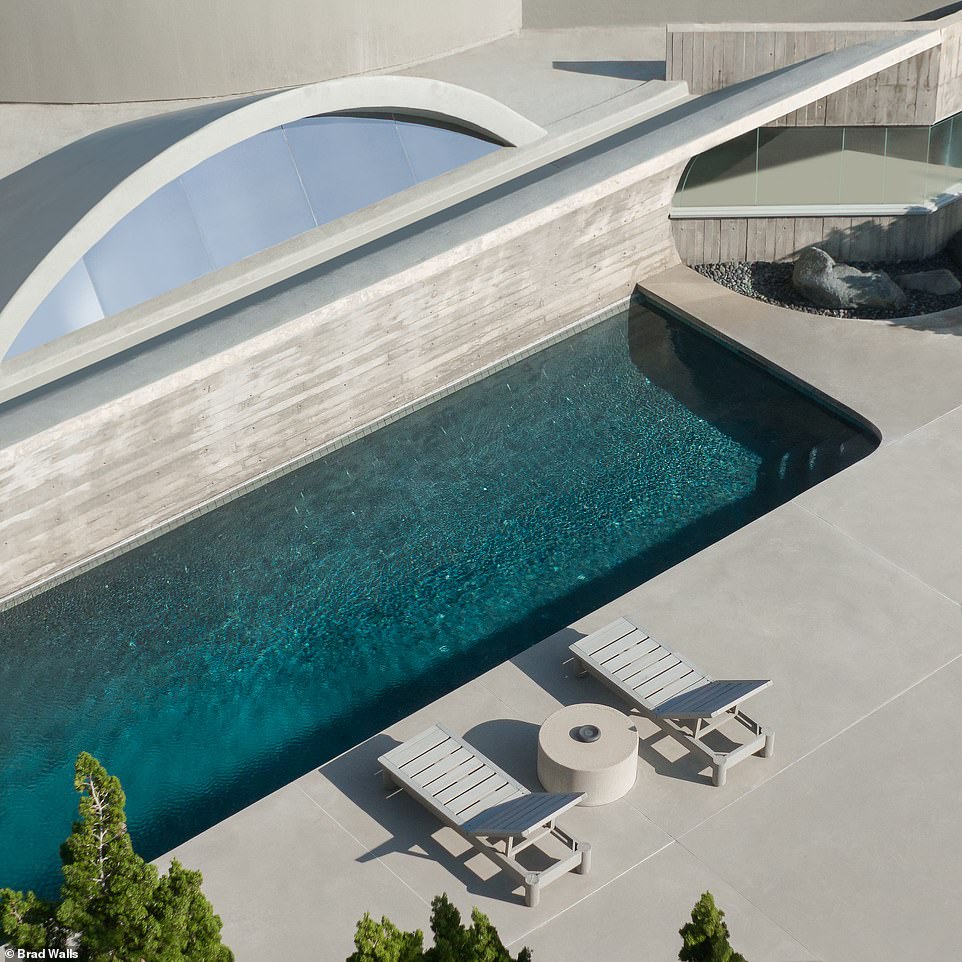 Behold, Walls’ favourite photograph from the book, taken at a house in Los Angeles. He reveals that he was the first photographer to be granted access to the property in 40 years. ‘The owners love and cherish their property and are very selective with who they let in,’ he explains, adding that he ‘even had security personnel’ with him on the shoot. ‘For this reason, it stands out to me,’ he says. Walls describes the dwelling, which was designed by the lauded American architect John Lautner, as ‘arguably the most renowned piece of architecture, if not in Los Angeles but in Malibu’. ‘I hope I did the pool justice,’ he adds 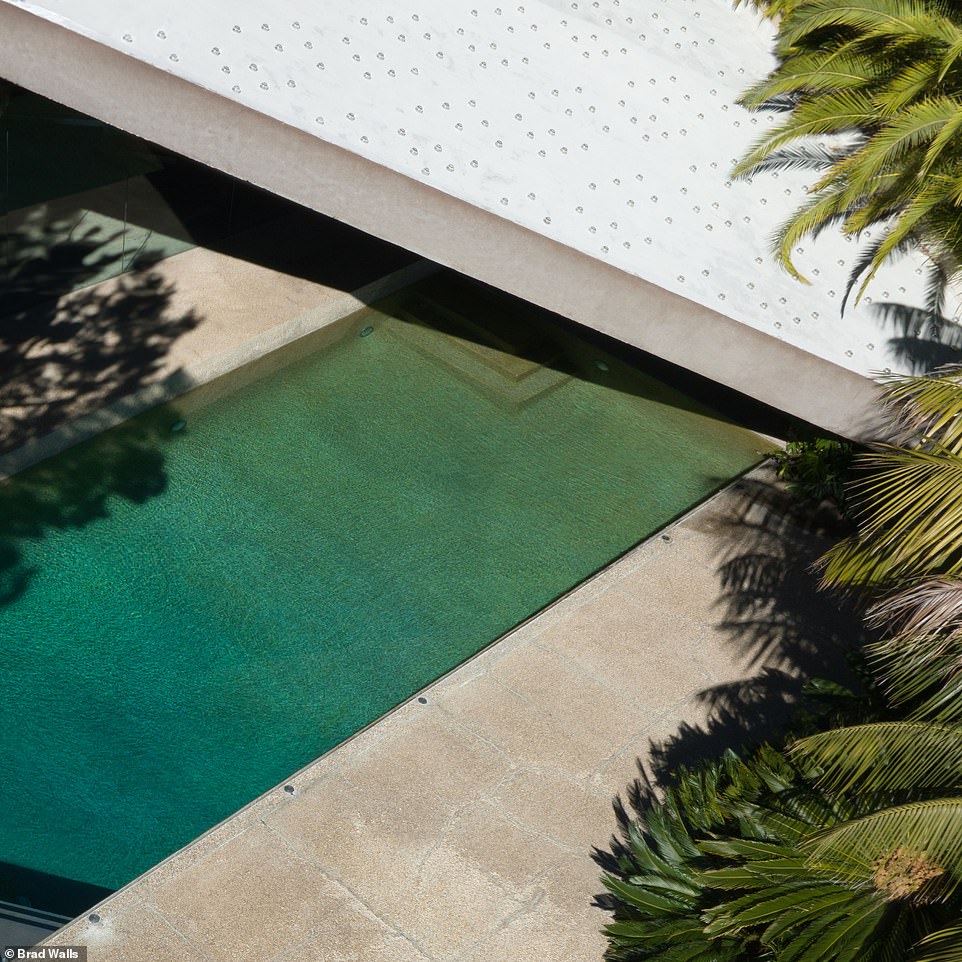 This glamourous picture shows a pool in Los Angeles’ Beverly Crest neighbourhood that is a star of the silver screen – it was used as a film location in both the 1998 hit The Big Lebowski, starring Jeff Bridges, and in 2003’s Charlie’s Angels: Full Throttle, which featured Lucy Liu, Drew Barrymore and Cameron Diaz. It’s owned by socialite John Goldstein and was designed and built between 1961 and 1963 by John Lautner 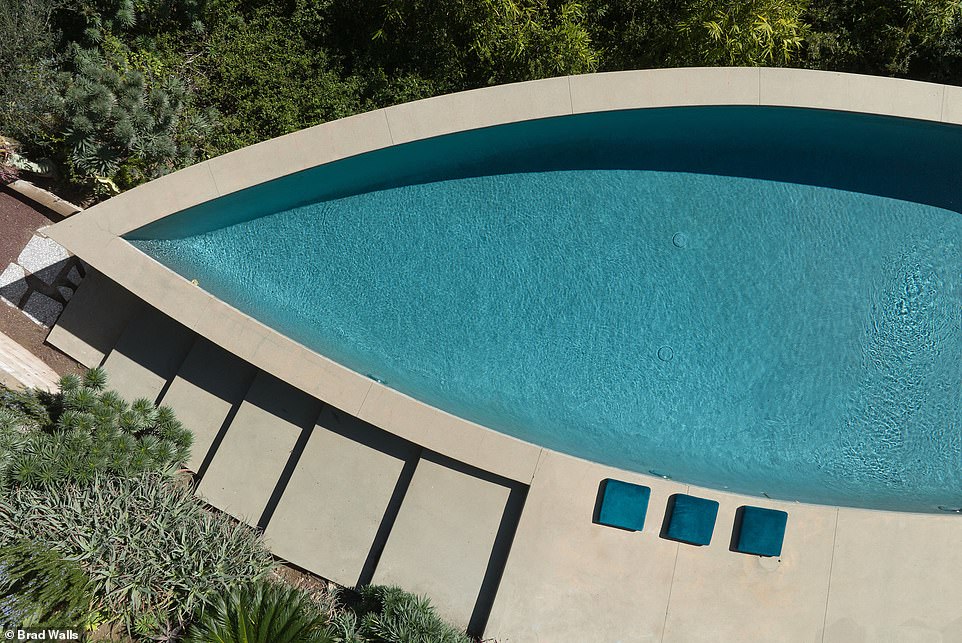 This picture was taken at a 1960s private home on LA’s Mulholland Drive designed by Lautner that Walls notes was ‘prominently used as a location for the film Lethal Weapon 2’, starring Mel Gibson and Danny Glover. The pool, installed after the shoot, is the only one that Walls swam in, he reveals. ‘It was the last pool I photographed in LA at the end of the trip – a celebration of sorts,’ he says. One of the ‘lovely’ owners – the property belongs to John McIlwee and the Broadway producer Bill Damaschke – gave him the whole house for the day, and told him: ‘Take a swim, feel the vibe. Make it your canvas.’ Walls adds: ‘People like this truly made the experience of making the book’ 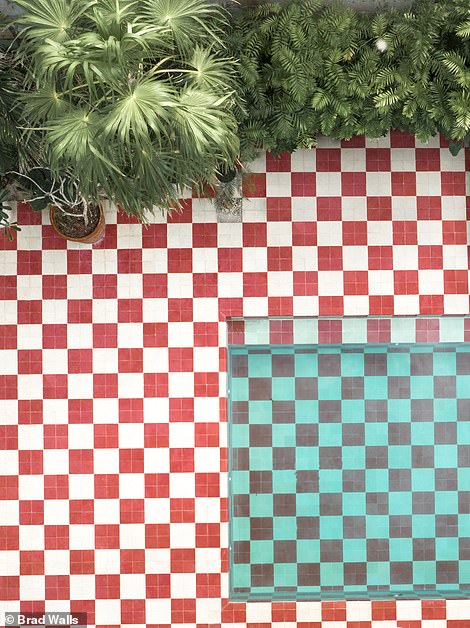 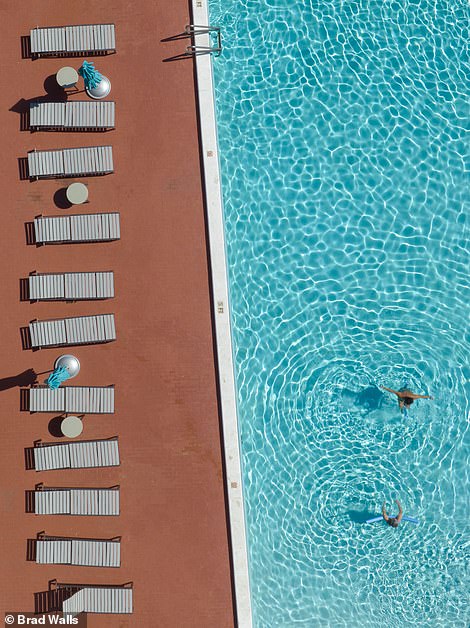 LEFT: The eye-catching checkerboard tiles of the pool area at the Hotel Panamera in Tulum Beach, Mexico, are the subject of this colourful shot, which is appropriately titled ‘Retro’. RIGHT: Walls snared this picture-postcard shot in Miami Beach, Florida 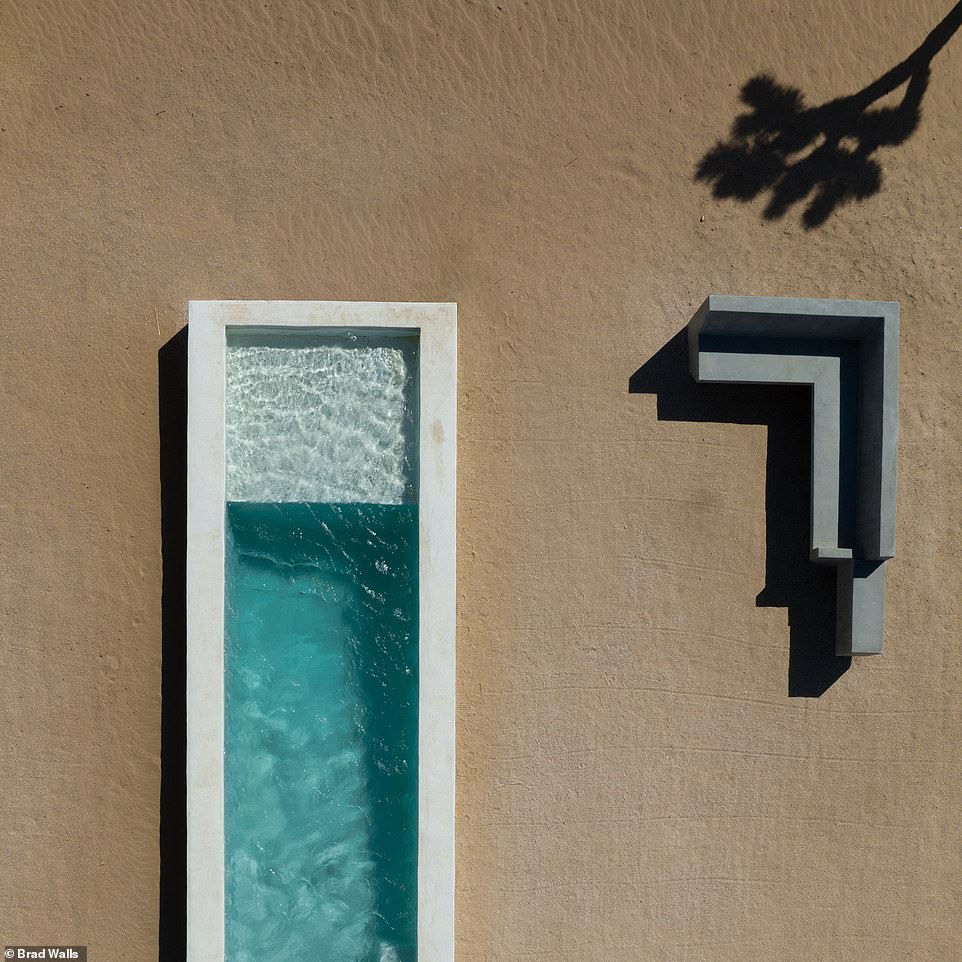 This gorgeous swimming pool can be found in Le Chacuel, a property that’s available to rent on Airbnb in Yucca Valley, California. Walls notes that the ‘luxurious’ site was designed by the architect Mila Morris 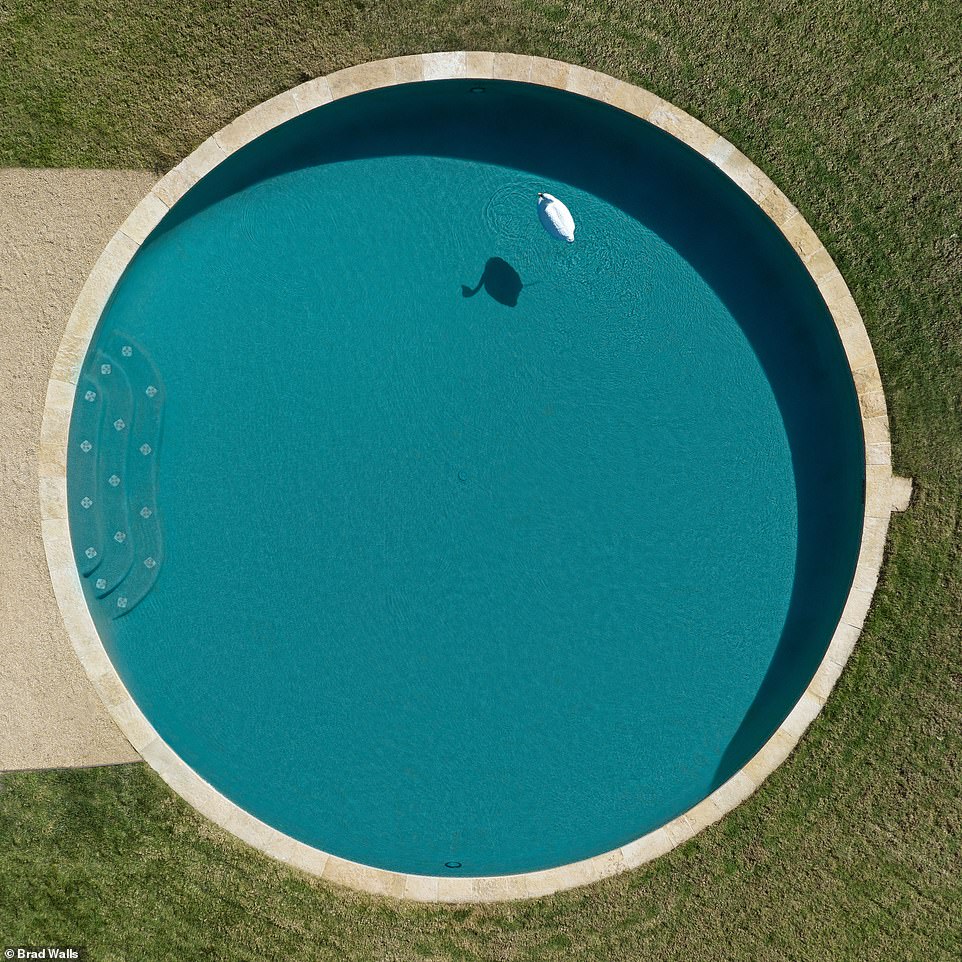 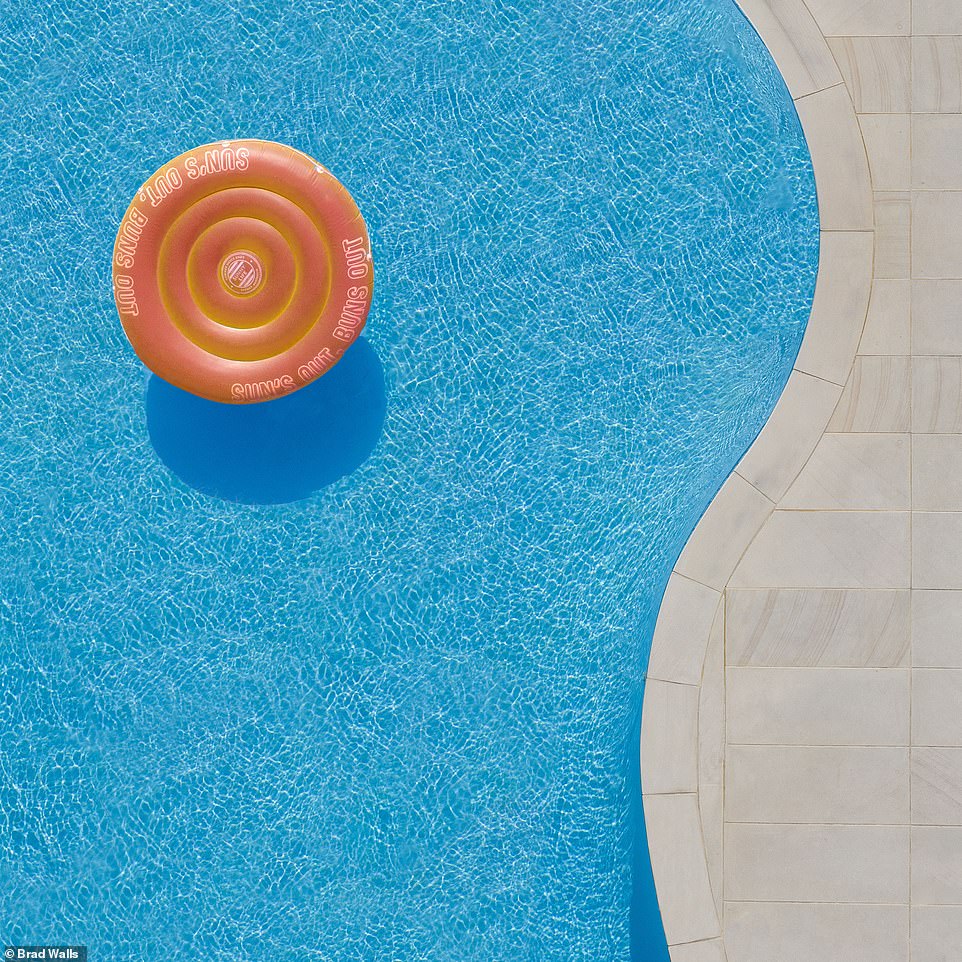 A picturesque pool in Vaucluse, a suburb of Sydney, Australia. The picture’s title – ‘Suns Out Buns Out’ – is a nod to the text that’s printed on the inflatable floating in the water 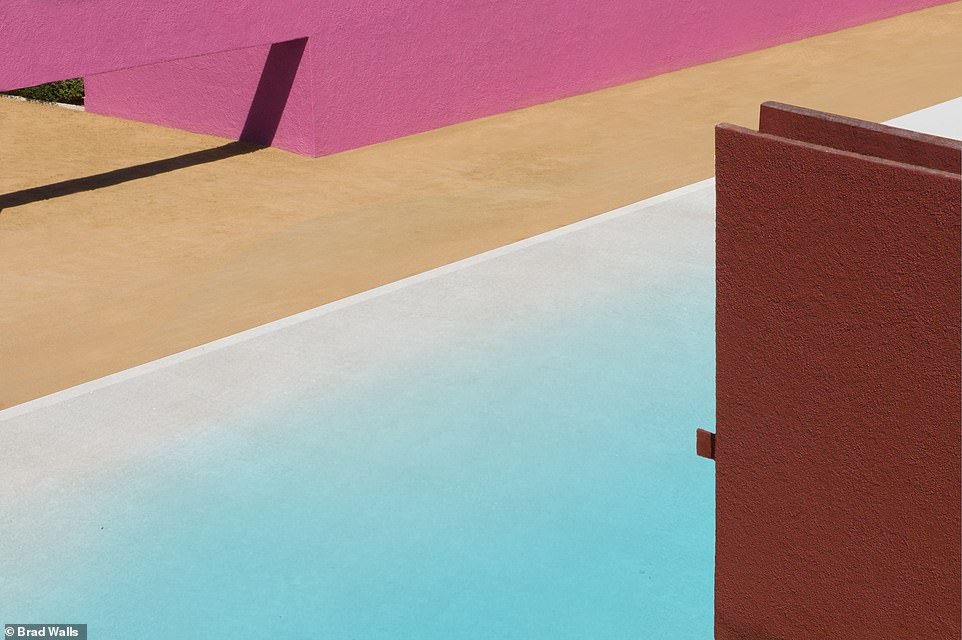 This vibrant lagoon can be found at the San Cristobal horse stables in Mexico city, designed by the famous Mexican architect Luis Barragan in 1968, Walls reveals 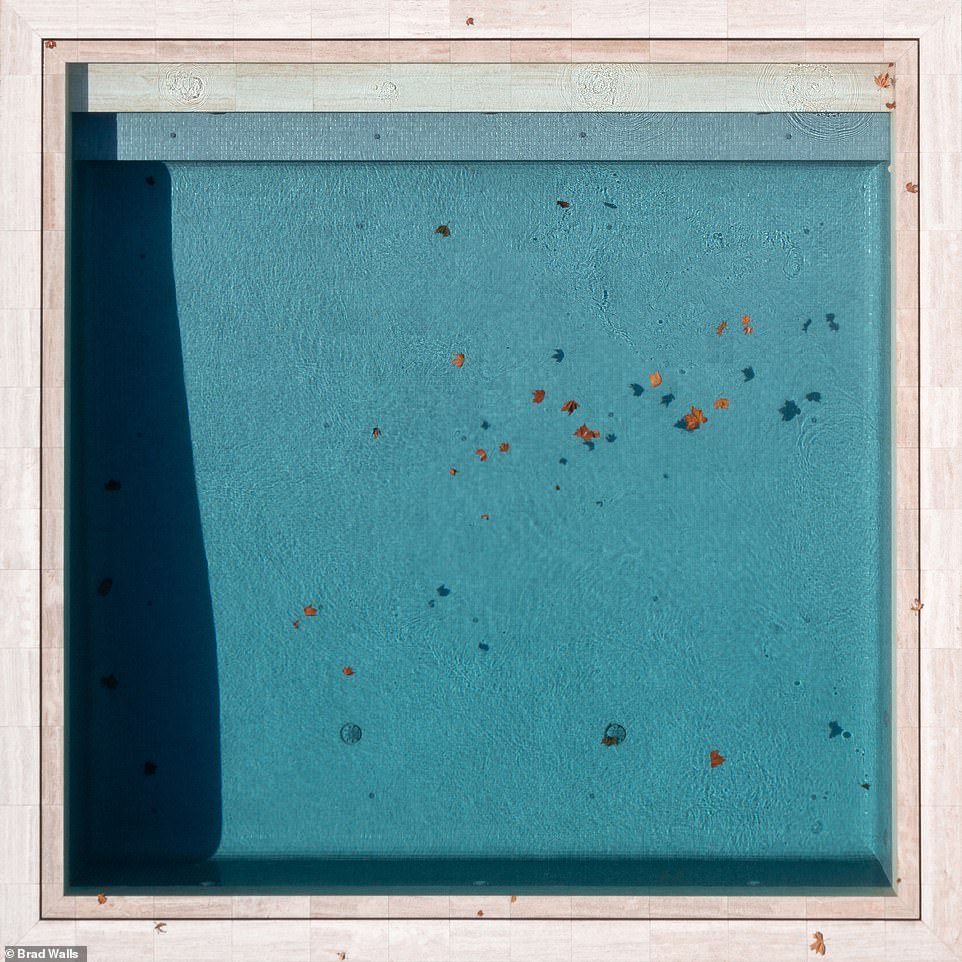 Autumn leaves float over the water in this peaceful shot of a pool in Toorak, a suburb in Melbourne, Australia 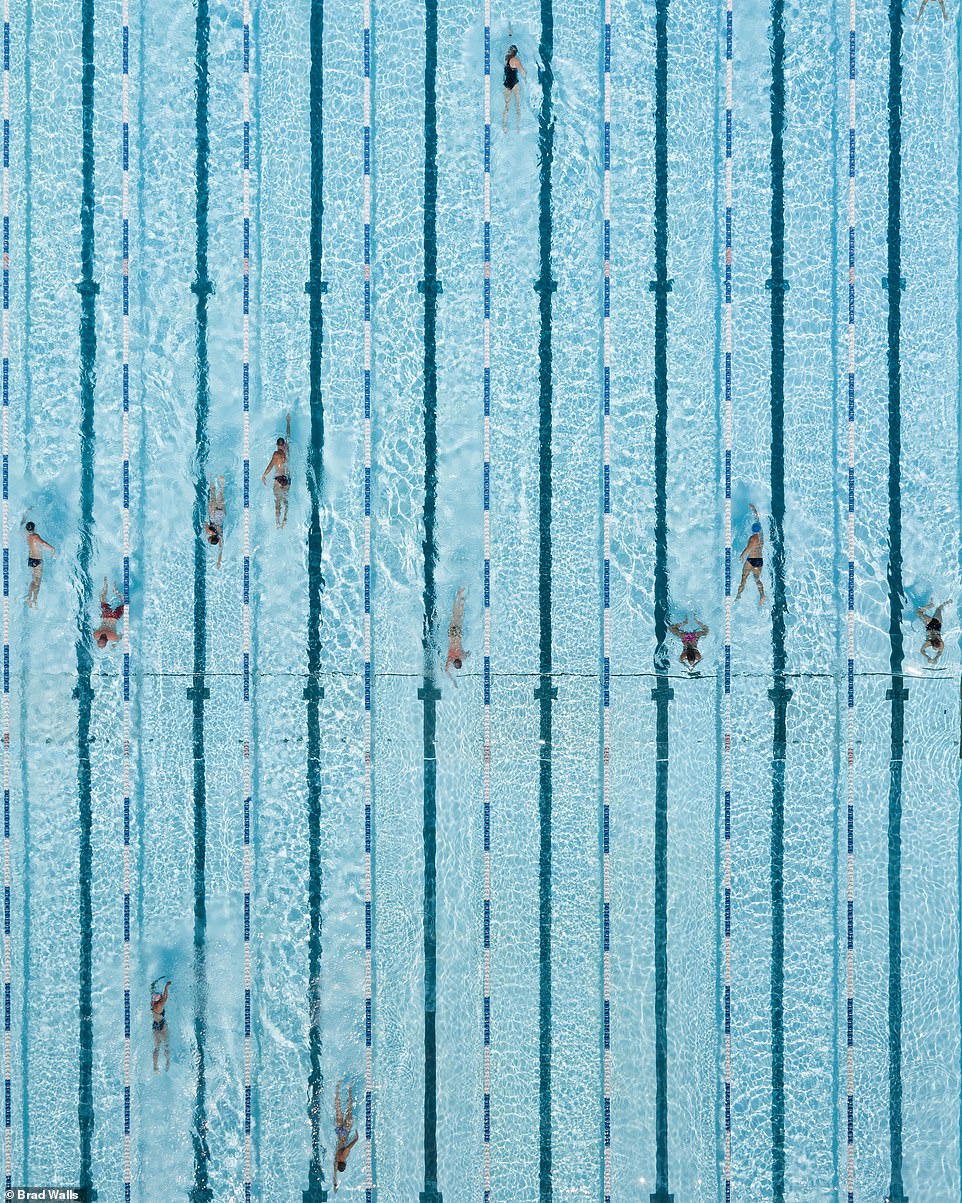 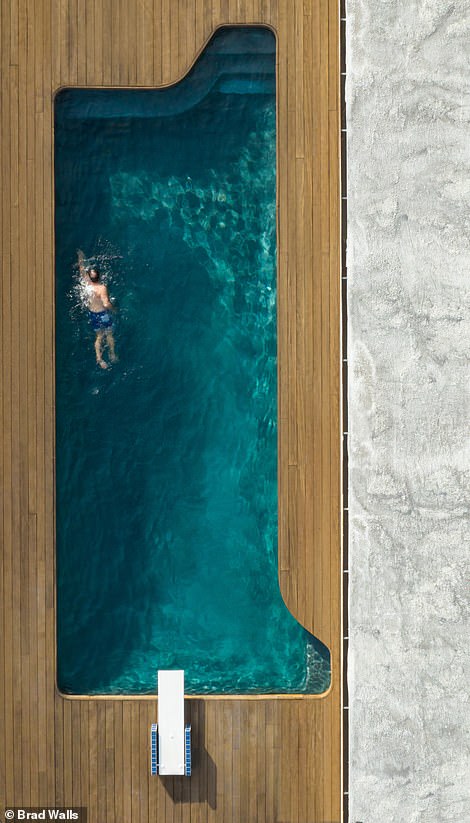 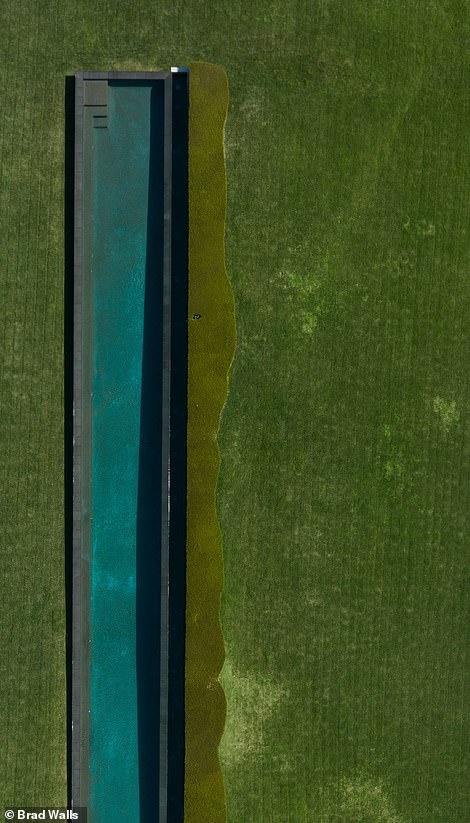 LEFT: The stylish pool that features in the shot is located in The Bird Streets, a neighbourhood that’s set above Los Angeles’ Sunset Strip. RIGHT: This stunning bird’s eye shot was captured in Malibu. Walls titled it ‘One Lap Only’ 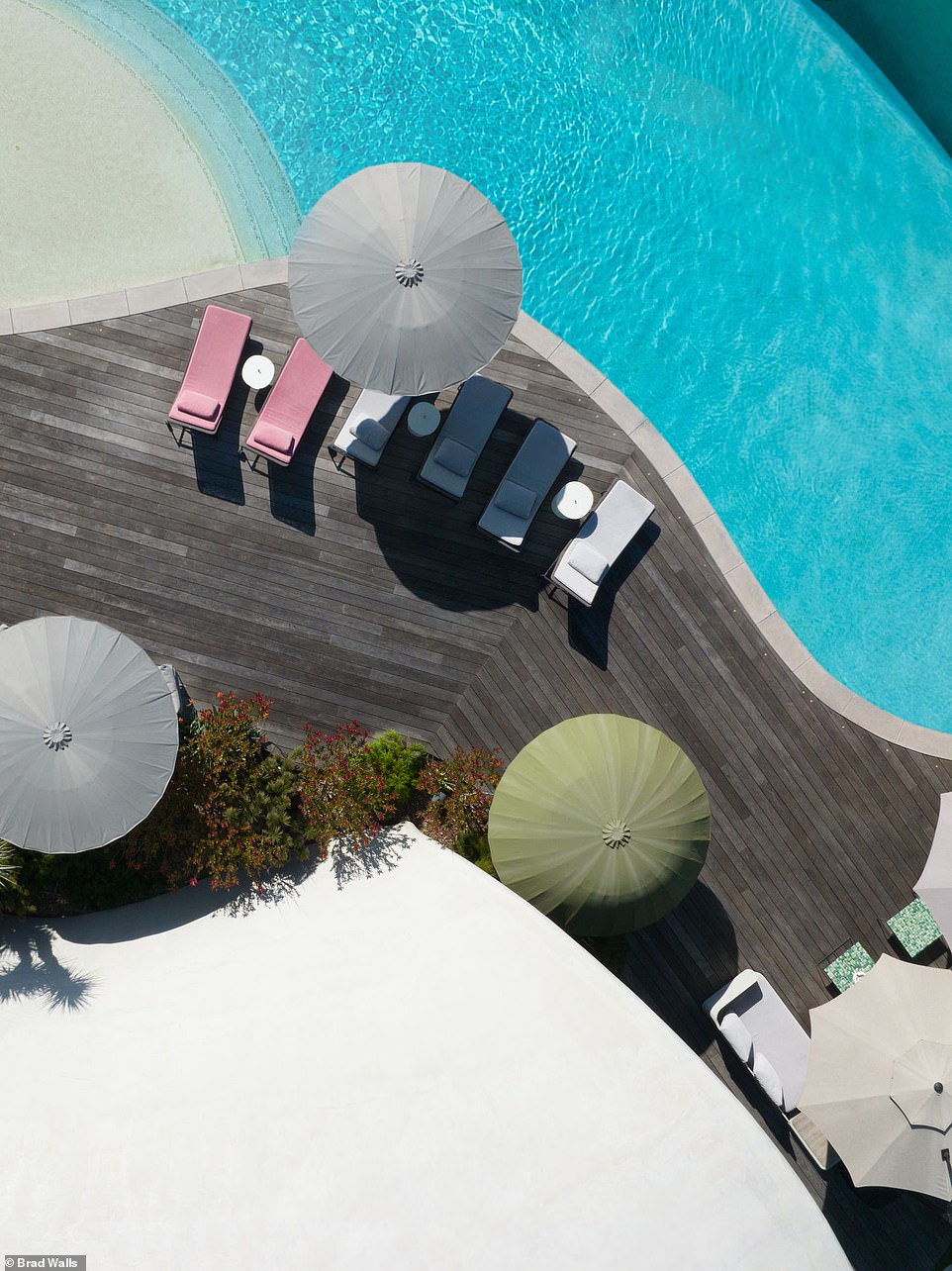 This dreamy swimming pool is set in the grounds of Robert Downey Jr’s property in Malibu, Walls reveals. He adds that the Iron Man actor’s home has been built using the Binishell method, meaning it’s a reinforced concrete structure that has a rounded roof 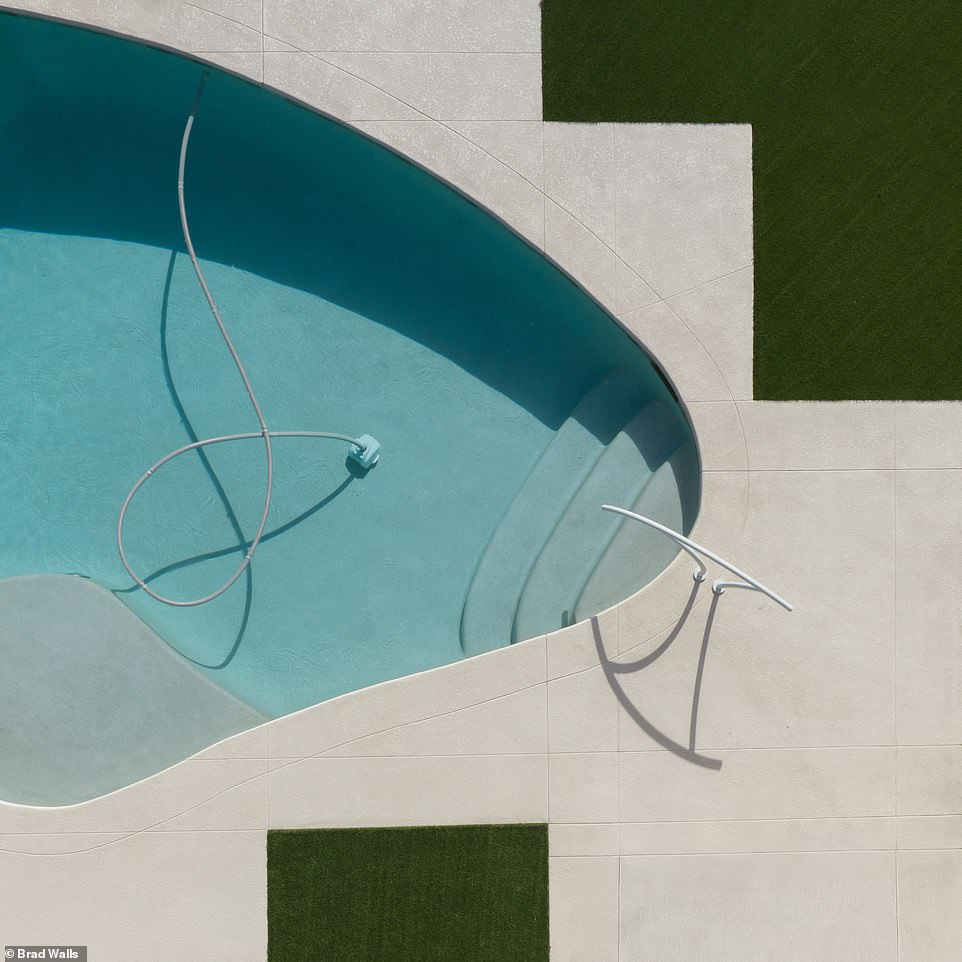 An idyllic pool in the Californian resort city of Palm Springs is the subject of this picture, titled ‘Patchwork’. How do the pools that Walls photographs look so pristine? He reveals: ‘Many of the pools in the book are very well kept, with constant maintenance, especially in places like Palm Springs where the main feature of the house is the pool’ 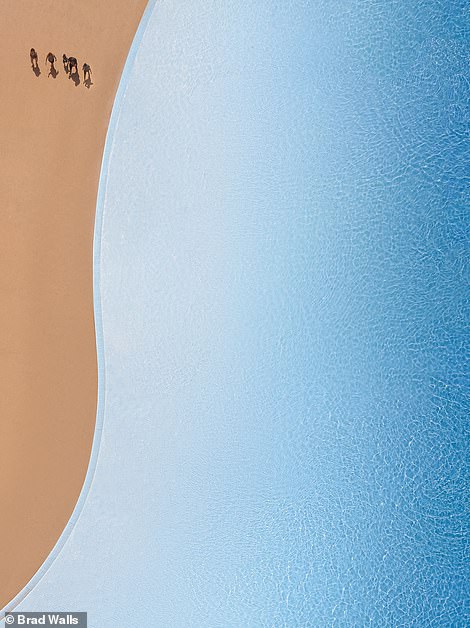 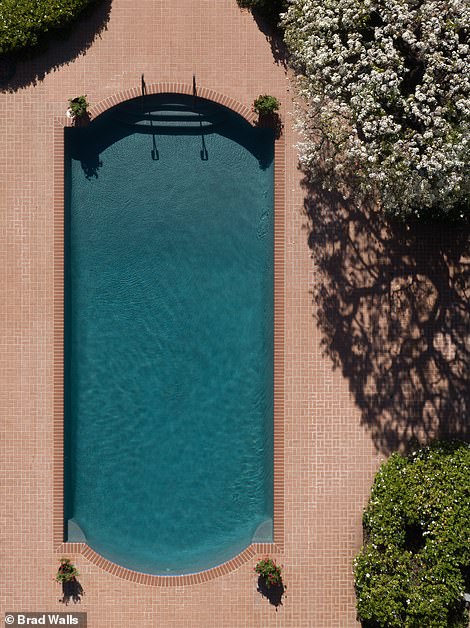 LEFT: The ‘Raging Waters’ water park in the suburb of Prospect in Sydney, Australia, was the setting for this tranquil picture, titled ‘Breathe’. RIGHT: This picture, titled ‘Romanticism’, shows a sleek lagoon in the Californian neighbourhood of Bel Air 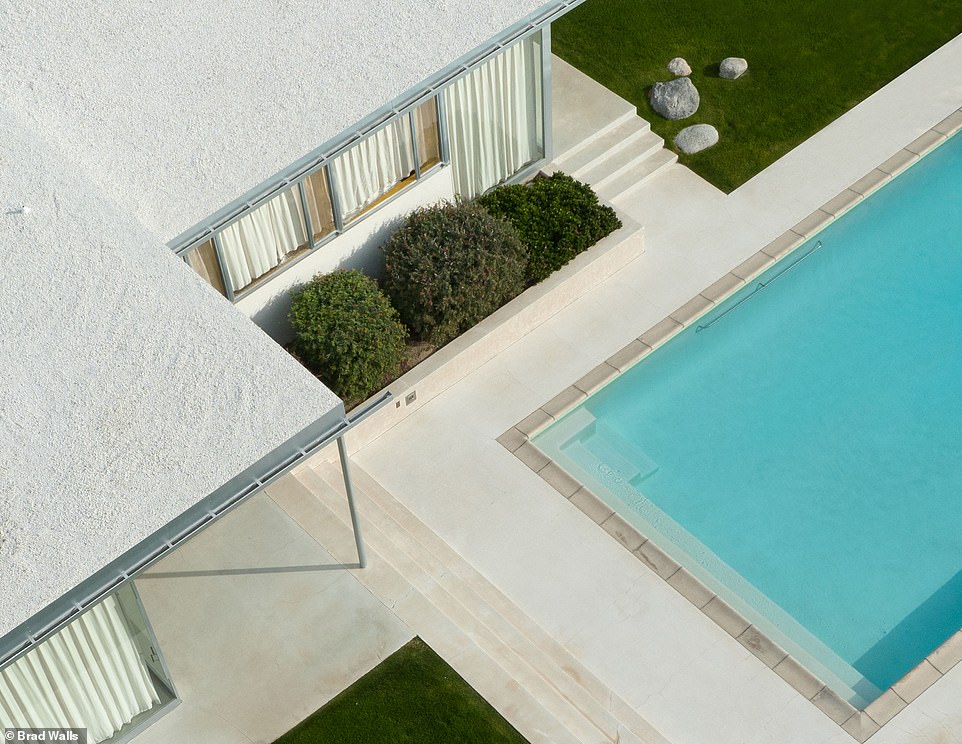 This serene picture shows a lagoon in a Palm Springs property that was designed by the Austrian-American architect Richard Neutra in 1946. Walls reveals that it was the subject of the legendary US photographer Slim Aarons’ most famous picture – the 1970 photograph ‘Poolside Gossip’, which showed then-owner Nelda Linsk and her friends lounging at the water’s edge 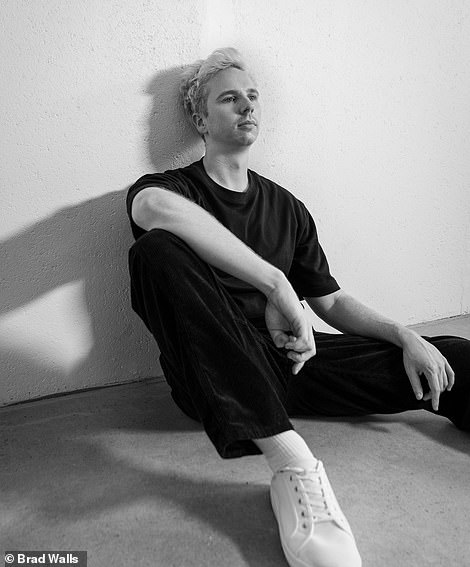 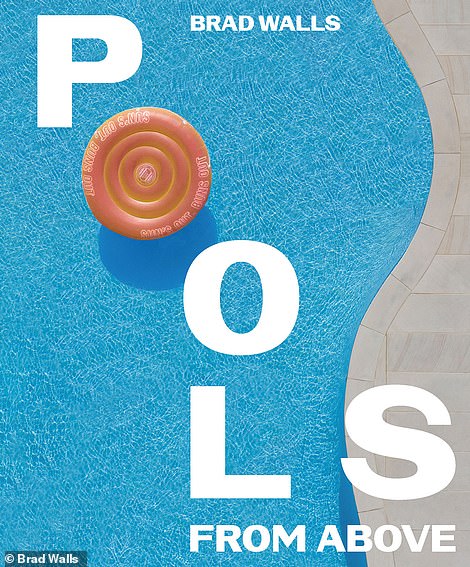 Australian photographer Walls, pictured, is currently living in Mexico City, working on other projects. Pools From Above by Brad Walls, published by Smith Street Books and Abrams & Chronicle, is on sale now for £28