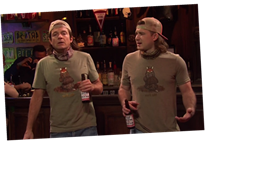 Morgan Wallen made his Saturday Night Live debut, two months after his initial invitation to the stage was rescinded.

During the episode, hosted by Jason Bateman, the country singer, who was featured as the musical guest, appeared in a sketch which spoofed the night Wallen was photographed kissing multiple college women and partying maskless in Alabama, days before he was originally set to appear on SNL. (Wallen, 27, was previously scheduled to perform on the Bill Burr-hosted episode in October.)

In the sketch, the "More Than My Hometown" singer made fun of himself by reenacting his bar outing in Alabama with the help of Bateman, who played the role of Wallen one month in the future.

"I am you from the future and I came here to stop you from partying tonight," Bateman's character said, later adding, "Trust me somebody's gonna post a video of you ignoring COVID protocols, the whole internet's gonna freak out … Once people hear about the party, you're in big trouble man, you're gonna get kicked off Saturday Night Live."

When Wallen responded with, "Lorne [Michaels] would never do that," Bateman's character said, "Of course Lorne wouldn't, he ain't no puss. He's the goddamn man, he's got balls the size of Toyotas. But the execs at NBC, they're gonna force his hand bro."

Wallen, in character, appeared worried as he shared, "Well I don't want to screw up an opportunity like that or let my fans down. I guess I'll leave the party then." But not before Bateman's character convinced him otherwise.

"Now I know it's hard, I actually forgot how fun this party was. I mean you got cute girls over here, you got tons of booze, I bet there's a whole hell of a lot of drugs around right? Maybe we stay for another five or 10 minutes," Bateman's character said.

Next, Bowen Yang, who played Wallen two months in the future, urged the singer and Bateman's character to avoid any experimental skin regimen. Shortly after, Pete Davidson appeared as a random guy at the party, similarly dressed as the trio, who predicted: "You're going to do the right thing and accept responsibility for what you did tonight … [SNL]'s gonna have you on two months later, I promise. There aren't many people willing to fly to New York right now."

Back in October, Wallen addressed his sudden removal from the show's lineup after Jack White replaced him as the musical guest.

"I'm not positive for COVID, but my actions this past weekend were pretty short-sighted and that have obviously affected my long-term goals and my dreams," he said in a lengthy Instagram video at the time. "I respect the show's decision because I know that I put them in jeopardy. I take ownership for this. I'd like to apologize to SNL, to my fans, to my team, for bringing me these opportunities and I let 'em down."

"You know, I think I've lost myself a little bit. I've tried to find joy in the wrong places and I don't know, it's left me with less joy," he added. "So I'm gonna go try to work on that. I'm gonna take a step back from the spotlight for a little while, and go work on myself."

Then in November, Wallen spoke to Bobby Bones about the controversy, how he cleared his mind and tried to grow from the incident.

"Having a son, obviously now I don't know that I'd be proud to show him those videos," he said, referring to his 4-month-old son Indigo Wilder. "I gotta think about some things a little bit differently."

Wallen, who picked up the new artist of the year award at the recent CMAs, said then that the low moment was "almost a good thing" for him. "I took a while, like almost two weeks, and just turned my phone off and didn't even look at it," he said. "Drove on the tractor, things like that, and just cleared my head. It was really, really good to me."

"Honestly, throughout this whole process, there's been times where I would just be like, 'I'm kind of like lonely and I don't know if I even like this,'" he added. "Then you know there's another high and you're like, 'Wow yeah I love this.' It just kind of goes through phases."

During his SNL appearance, Wallen performed his singles "7 Summers" and "Still Goin Down."

As information about the coronavirus pandemic rapidly changes, PEOPLE is committed to providing the most recent data in our coverage. Some of the information in this story may have changed after publication. For the latest on COVID-19, readers are encouraged to use online resources from the WHO and local public health departments. PEOPLE has partnered with GoFundMe to raise money for the COVID-19 Relief Fund, a GoFundMe.org fundraiser to support everything from frontline responders to families in need, as well as organizations helping communities. For more information or to donate, click here.