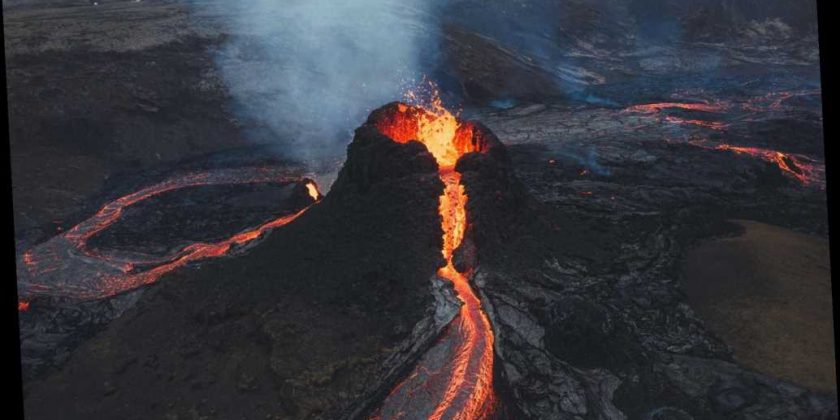 More photos and video footage of Iceland's Fagradalsfjall volcano are emerging as it continues to erupt for the first time in thousands of years following weeks of unprecedented earthquakes.

Almost two weeks after the volcano woke from dormancy near the country's capital, Reykjavik, photographers have captured a series of stunning aerial shots showing lava, smoke and ash pouring from it.

One such artist, Thrainn Kolbeinsson, has shared a collection of photos and video of Fagradalsfjall, from the lava spouting from the volcano's mouth to the fissures it has left down the mountain's side and resulting lava flows.

"This still feels unreal. Violent spits quickly turn into smooth streams of glowing lava as new earth is constantly being pushed up," he captioned one video series late last month.

Those who want to marvel at the natural phenomenon in real time can watch a live feed of the volcano as it continues to spew lava and smoke into the air. "Even though it might look terrifying, it's actually strangely mesmerizing to watch this natural beauty unfold — slowly but surely. It's hard to look away," he added. "This will take some time to settle in."

Earlier this week, Kolbeinsson shared more shots and wrote alongside one gallery, "It has changed immensely in only a few days now and grown way bigger."

The eruption — Fagradalsfjall's first in 6,000 years, and the first on the Reykjanes Peninsula in general in almost 800 years, according to the Associated Press — occurred at 8:45 p.m. local time on March 19, causing a fissure roughly 0.12 miles long, the Icelandic Meteorological Office (IM Office) reported at the time.

"I have experienced earthquakes before, but never so many in a row," Reykjavik resident Auður Alfa Ólafsdóttir told CNN. "It is very unusual to feel the Earth shake 24 hours a day for a whole week. It makes you feel very small and powerless against nature."

The volcano eruption was also close to the Keflavik International Airport, which was briefly affected as a result.