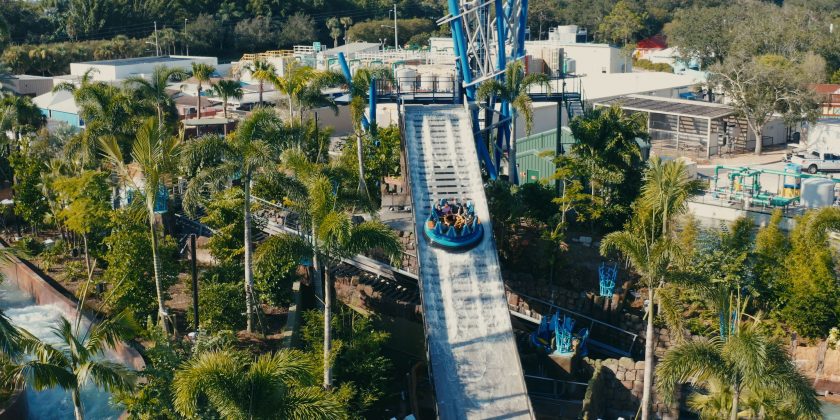 At many of SeaWorld Orlando’s exhibits and shows, visitors ogle creatures in the water. For the park’s newest attraction, however, it’s the guests who are in the drink. They aren’t swimming among tropical fish or other marine life. They are aboard circular vehicles, floating downstream in turbulent, churning waters, and bracing themselves for the finale: the world’s tallest drop on a river raft ride.

Infinity Falls, which opened in October, takes passengers on a journey through a lushly landscaped area that SeaWorld transformed for the attraction. Whereas most of the park is dedicated to ocean-dwelling animals, the new ride focuses on a freshwater environment.

“We created a South American rainforest in the middle of SeaWorld Orlando,” says Jeff Hornick, senior director of theme park development for SeaWorld Parks and Entertainment. The park imported more than 700 trees, including a humongous ficus that weighs in at 22,000 pounds, to line the banks of the ride. “It’s a lost river jungle setting,” adds Hornick.

Instead of the 10- or-12-passenger vehicles typically used for raft rides, Infinity Falls features smaller ones designed for eight passengers. The nimbler rafts provide a more dynamic ride experience. After piling in at the loading station, the action is relatively calm at first. Near the start of the ride, the rafts pass a lovely flamingo habitat.

Business picks up quickly, however, as the river’s path introduces curves, dips and drops. As with whitewater excursions on real rivers, the combination of the rapids and elements in the riverbed disrupts the balance of the rafts and makes the ride thrilling. The vehicles teeter, spin and careen off the sides of the channels. They also take in generous amounts of splashing, cascading whitewater.

Depending on the weight distribution of the passengers and which way the rafts are facing when they encounter one of the disruptions, riders might get soaked or remain dry. But before they disembark, it’s a safe bet that passengers will get sufficiently doused at least once.

It can get mighty hot and sticky in Orlando, especially during the peak summer season. That’s why there are plenty of water rides offering cool relief at the area’s many theme parks. In fact, Journey to Atlantis, a nicely themed attraction that is part roller coaster and part splashdown boat ride, has been drenching SeaWorld Orlando guests for many years. But a water ride can be a tricky proposition for visitors at an otherwise dry theme park.

“We had a lot of conversations about how guests get wet on river rapids rides,” Hornick says about the development process for Infinity Falls. “We found when people get doused by a waterfall (hello, Popeye & Bluto’s Bilge-Rat Barges at Universal’s Islands of Adventure), they get upset about that. When guests get wet on our ride, it’s really from the rapids, and that’s more acceptable.”

There is a waterfall on the SeaWorld ride, but the water stops falling as the rafts pass under it. There are near-miss geysers that do the same thing. Hornick failed to mention, however, that onlookers can activate water blasters and fire at will at passengers. One way or the other, riders aboard Infinity Falls are bound to get soaked.

You could purchase a poncho (or bring one from home) before getting on the ride. After you get off, SeaWorld offers, for an additional fee, walk-in body dryers big enough for a few people. Both strategies would help keep you relatively dry. But hey, isn’t the whole purpose of a river raft ride to get wet? But you must dress right to survive theme park water attractions: Either wear or bring a bathing suit and sandals.

Midway through the course, a traditional lift brings the rafts up a hill. The extra dose of gravity along with the fast-moving rapids help keep the action lively.

For the ride’s finale, a clever vertical lift (the first of its kind in North America for an attraction like this) delivers the rafts to the precipice of Infinity Falls’ record-breaking 40-foot drop. While it gives SeaWorld bragging rights for a river rapids ride, there are log flumes, shoot-the-chutes, and other water rides at parks that climb much higher and have longer, steeper and faster drops. The drop is thrilling and makes a big splash at the bottom, but it’s not so intimidating that younger visitors or those who are wary of extreme coasters wouldn’t want to give the attraction a whirl. The minimum height to ride is a fairly low 42 inches.

It might have been nice if Infinity Falls included some animatronics or other storytelling elements during the ride. But its rainforest motif is stunning and at night, the ride features dramatic lighting. After disembarking, guests are invited to visit kiosks that deliver information about freshwater ecosystems and water conservation.

Along with the river rapids attraction, SeaWorld introduced the themed restaurant Waterway Grill. It includes South American-inspired dishes such as grilled churrasco steak and empanadas along with a wide variety of craft beers.

Infinity Falls continues SeaWorld’s evolution. More than just a place to passively watch animals, guests can now engage with attractions and enjoy thrilling rides. The chain says that it is now committed to introduce something new at its parks every year. For 2019, SeaWorld Orlando will convert an area into Sesame Street Land and offer rides such as Super Grover’s Box Car Derby, a junior roller coaster.