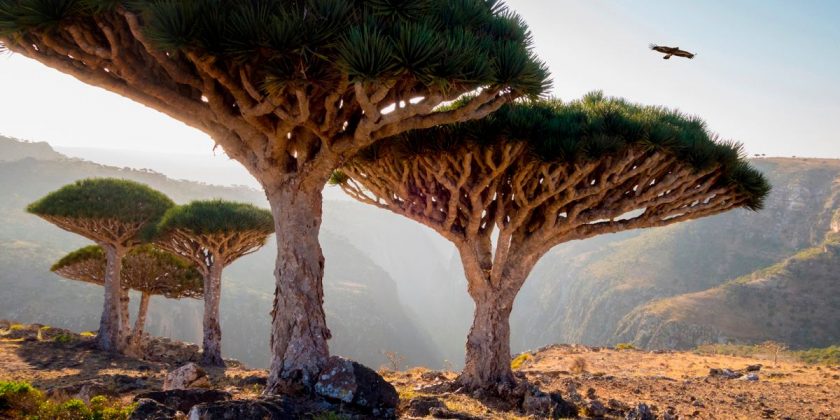 The world is filled with weird and wonderful places, but one island boasts such an unusual landscape it’s been dubbed the most alien-looking place in the world.

Socotra island, part of the archipelago of the same name, is famed for the bizarre trees which grow there from the striking Dragon Blood Trees with their umbrella-esque appearance, to the towering Cucumber Trees.

In fact when the United Nations ran a study counting the flora and fauna which live on the island, they found over 700 endemic species, a host of which haven’t been seen anywhere else in the world.

There are also over 192 types of birds, 253 types of corals, and over 1000 marine life species residing amongst the shores.

Including some unusual creatures such as blue tarantulas to bizarre-looking chameleons.

Then there is the scenery itself; think narrow coastal planes, limestone cliffs and caves, as well as the towering Hajhir Mountains.

Therefore, it comes as no surprise that the Socotra archipelago, with its four islands and two rocky islets, is a UNESCO World Heritage Site.

Hailed as one of the most isolated land forms on earth, it’s believed that the archipelago used to be part of the Gondwana supercontinent, but broke away over 20 million years ago.

Unfortunately, it’s unlikely you’ll be able to visit the island any time soon.

Socotra has historically been politically governed by Yemen, which is in the midst of a civil war.

Socotra was not involved in the conflicts (it lies 350km off Yemen’s southern coast), but in April 2018 it did become a source of political tension between the UAE and Yemen.

The UAE sent troops to Socotra, but Yemen officials argued that the country had not sought permission to deploy, causing tensions to rise.

However, the two countries managed to broker a deal in which Saudi soldiers replaced the UAE troops (Saudi Arabia is one of Yemen’s allies), to work on military training with Yemeni security forces, the latter who operate the island’s airport and the port.

The Foreign Office advises against all travel to both Yemen’s mainland and its islands, which it has done so since March 2011, before the civil war broke out in 2015.

It explains: "Yemen remains very tense and unstable and the security situation throughout the country is dangerous and in some areas it is unclear which faction has control.

"In addition to ongoing fighting, there’s a threat of terrorist attacks, kidnap and unlawful detention against foreigners from terrorist groups, local militia, armed tribesmen and criminal groups that have the intent and capability to carry out such acts."