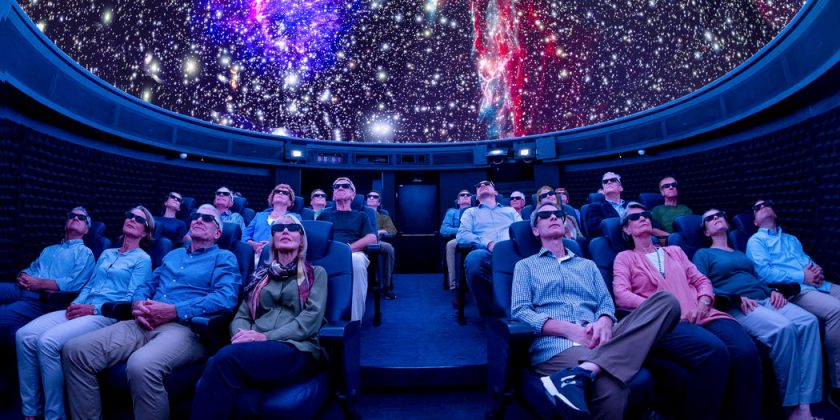 Enrichment programs have long been a part of small ship sailings, which tend to be destination-focused and use time onboard to bone up on geography and culture. But as cruise lines of all sizes attempt to attract more passengers, many are betting that intellectual fare may broaden their appeal.

“We’re seeing a lot more exciting options now and a shift in culture with bigger ships bringing on more enrichment than ever before,” said Colleen McDaniel, senior executive editor of Cruise Critic, a cruise review website. “Some travelers might say, ‘Cruising isn’t for me,’ then see TED Talks or Crystal’s Creative Learning offerings that are different and unexpected and piques their interest.”

Learn about your destination, or about the stars

Viking Ocean Cruises recently added resident historians to the crews of each of its six ships. The historians offer lectures on the history of the cruise destination, but also hold round-table discussions on a variety of themes, from women explorers to Venetian naval power. They also host history-themed dinner discussions and maintain office hours for one-on-one time with guests.

Viking also offers access to TED Talks videos in its onboard cinemas and on demand in its cabins. Some of the more popular screenings include Yuval Noah Harari’s “What Explains the Rise of Humans” and Honor Harger’s “A History of the Universe in Sound.”

“Onboard lectures provide a bridge between a traveler’s desire to learn and the reality and time limitations of their day to day lives,” said Paul Largay, chief executive of Largay Travel, an agency that’s followed the new educational offerings closely.

Enjoy art, fashion, and culture while crossing the Atlantic

Cunard Cruise Line regularly keeps passengers engaged on trans-Atlantic itineraries with special guests. In the past, the line has invited the musician James Taylor and the fashion designer Bob Mackie to participate in Q&A sessions with passengers.

Upcoming special events on Cunard trips include a dance-themed ocean crossing from August 11 to 18 featuring the English National Ballet, during which dancers will offer a daily ballet class, host talks on choreography and, in the evenings, perform for guests.

Trans-Atlantic Fashion Week will be held July 28 to August 4, and will feature talks by Stephen Jones, a British hat-maker; Stuart Weitzman, an American shoe designer; the fashion historian and journalist Colin McDowell; and Pat Cleveland, one of the original “supermodels.”

Crystal Cruises’ shipboard enrichment program, Creative Learning Institute, offers lessons on topics from ballroom dancing to maritime history. Depending on the sailing, you may also find classes in floral design, wellness seminars hosted by experts from the Cleveland Clinic, and a series focused in digital filmmaking that includes lessons on shooting and editing.

Enjoy a college course, on vacation

Beginning in 2019, Lindblad Expeditions will add onboard lectures from college professors on topics like science and history on select itineraries. The new series is the result of a partnership with One Day University, which organizes public lectures by college teachers across the country.

In 2019, four Lindblad cruises, including trips to South Georgia and the Falkland Islands, Alaska’s Inside Passage and Patagonia, will each carry a pair of professors from Harvard, Columbia and Yale, among other universities, who will lecture and socialize with guests during the trip.

The lecturers were chosen, according to the company, not for their expertise in the destinations, but for their ability to deliver engaging talks on topics including the life of Abraham Lincoln, the human brain and immigration in America.

But for all its newfound depth, vacationers need not worry — shipboard intellectual fodder is still balanced by diversion.

“We’re giving people something to do that’s not sitting by the pool and is mentally engaging,” said Doug Jones, owner of Sixth Star, an agency that programs enrichment courses for cruise lines. He looks for engaging speakers who can present a topic in 45 minutes and then make themselves available for follow up throughout the cruise. “It’s not like a college lecture.”