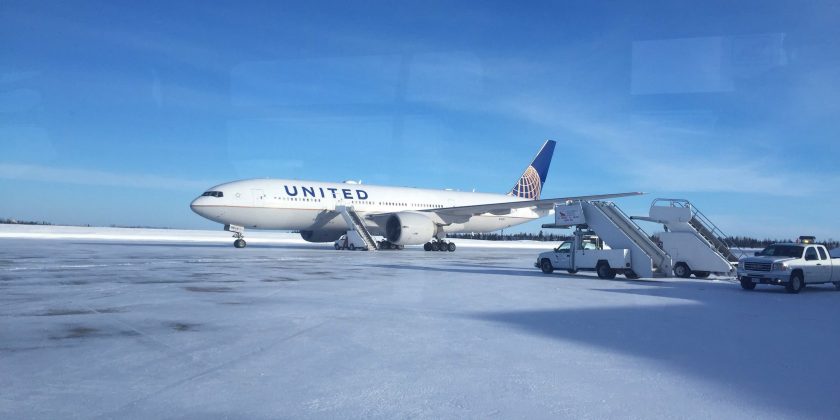 Passengers traveling on United Airlines Flight 179 from Newark, New Jersey to Hong Kong made what was supposed to be a brief landing in Canada for a passenger with a medical emergency, before a mechanical issue prevented the flight from taking off for over 16 more hours, leaving them stuck in frigid weather.

The flight made the emergency landing at Goose Bay Airport in Newfoundland, Canada at 9:30 p.m. AST on Saturday, when the affected passenger was taken to a local hospital, according to CNN. However, as the plane was set to take off again, it remained grounded because of a mechanical issue. Passengers spent the night on the plane as temperatures dwindled and food supplies ran low.

“We were told we were just refueling and then we’d head back to Newark. But there was an issue with getting one of the emergency exit doors securely closed,” passenger Steven Lau told NBC News.

Passenger Sonjay Dutt chronicled his experience on Twitter. “My home for the last 12+ hours,” he captioned a photo of the plane in the snow on Sunday morning.

The passengers were not allowed to leave the airplane and go inside the airport because the Goose Bay Airport did not have a customs officer on duty.

“Prior to departure, the aircraft experienced a mechanical issue. The airport did not have customs officers overnight so we were not able to let customers depart the aircraft. An alternative aircraft is being flown in to transport customers back to Newark,” United said in a statement on Sunday obtained by PEOPLE. “We apologize to our customers and our crew is doing everything possible to assist them during the delay.”

“Passengers have been generally respectful and calm given the circumstances, but everyone is frustrated and angry,” Lau told NBC News.

Lau and Dutt tweeted that local Goose Bay residents brought Tim Hortons snacks and water to the passengers at one point during the delay, as food supplies on the airplane were running low.

Passenger Chris Liew told ABC News that the passengers were stuck for at least 16 hours.

“I think by the third hour they knew something was wrong mechanically,” he said. “They had time to send another flight. But they didn’t until close to 12 to 13 hours later.”

United said that it sent a rescue plane to fly the passengers back to Newark on Sunday evening, according to ABC. The airline said the passengers departed Newark on the original flight at 3:03 p.m EST on Saturday and arrived back in Newark around 6:00 p.m. on Sunday.

“Taking off on rescue plane back to Newark after almost 19 hours stranded in Goose Bay,” Dutt wrote on Twitter.

“While it hasn’t been too terrible for me, there are several smaller children and older passengers who I imagine it’s been harder on,” Lau told NBC News.