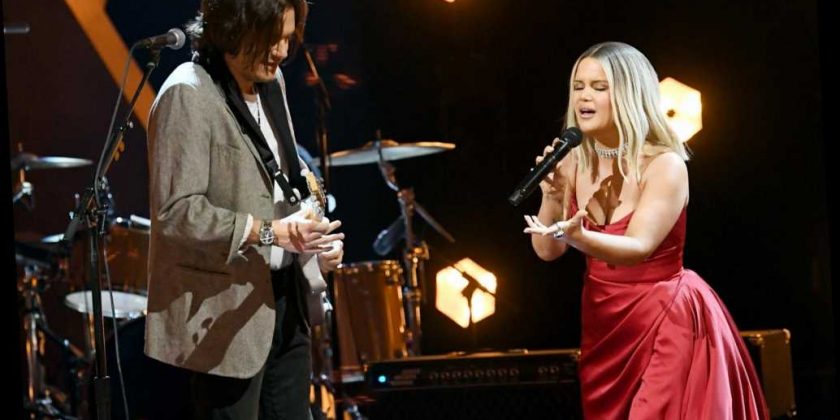 Morris, 30, and Mayer, 43, sang her nominated hit "The Bones" during the socially distanced awards show, broadcasting from Los Angeles.

The country singer, who rocked a red dress with a high-leg slit, was backed by the "Gravity" rocker on guitar and on vocals on the song's chorus. The friends looked to each other with a smile multiple times during their performance, which also featured a signature guitar solo from Mayer.

The song marked Mayer's sixth time performing at the Grammys and Morris' third.

She earned one nomination this year, for best country song for her 2019 single "The Bones," though the song lost out to another Morris hit, "Crowded Table," which she recorded and released as part of The Highwomen alongside Brandi Carlile, Amanda Shires and Natalie Hemby.

Prior to their performance, Morris raved to PEOPLE (the TV Show!) correspondent Jeremy Parsons about Mayer, whom she said she first met at the Grammys several years ago.

"I'm performing 'The Bones' with my friend playing guitar, John Mayer, so it's gonna be a really beautiful performance," she said. "He adds so much to it, obviously — he's John. I'm so [grateful] to him that he is sitting in with us tonight." "He's just smart as a whip. He is also really, really thoughtful and he internalizes every other word he says," Morris added. "I feel like it's kind of adorable. He's been just so respectful and complementary to my music over the years."

In 2019, the mother of one named Mayer, who is not nominated this year, as one of the artists with whom she would like to collaborate. "I love all music, I love all genres. There's so much great music out right now. If I were outside the country genre, I would love to do something down the line with like Post Malone or H.E.R. There's so much talent out there, John Mayer would be really fun," Morris said then, during an appearance on SiriusXM's The Highway.

The Grammys have a tradition of unlikely pairings for performances, but Mayer, who has previously raved about Kacey Musgraves and Brandi Carlile on social media, is no strange to the country genre. At the 2013 American Country Music Awards, Mayer and Brad Paisley performed the latter's "Beat This Summer," his second single off of Wheelhouse.

Then in 2015, Mayer appeared on a CMT Crossroads special with Keith Urban to perform a medley of songs. And two years later, Mayer tried his hand at a more country sound with the release of his song "In The Blood" in 2017.

More recently, he and Chris Stapleton released their duet "I Just Remembered That I Didn't Care" in 2019. Like many socially-distanced awards shows that have already taken place, this year's Grammys saw nominees and performers come together while staying safely apart to celebrate amid the COVID-19 pandemic.

Throughout the show, several music venues across the country, which have been greatly impacted by the pandemic, are being honored as bartenders, box office managers and other day-to-day employees serve as presenters for various awards categories.

The Grammy Awards, hosted by Trevor Noah, are airing on CBS Television Network and Paramount+.