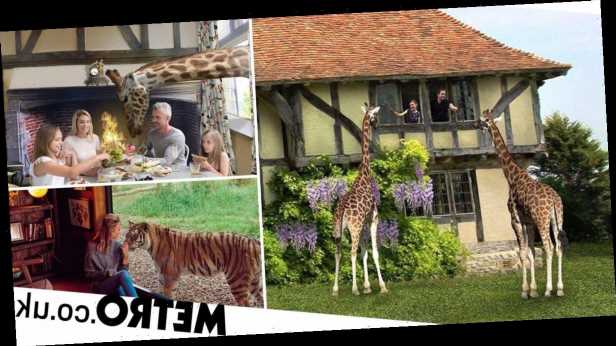 It’s not a standard UK holiday where you can feed giraffes from the comfort of your hotel. But that’s exactly what Port Lympne Hotel and Reserve is offering.

The luxury hotel near Hythe, Kent, has just announced the opening of their new Giraffe Hall property, which will give those staying a super personal experience with the majestic animals.

Despite not opening until Summer next year, the waiting list for Giraffe Hall has already reached 9,000 – and you can probably see why.

This new part of the reserve is located in the 15th century Grade II listed Wealden hall house, and has 10 en-suite bedrooms and five luxury cabins.

Animals like giraffes, rhinos, gorillas, and big cats roam around various enclosures on the property, with Giraffe Hall being the closest to the giraffe habitat.

The herbivore safari creatures will have a trail area built right next to the rooms, so there’s every chance they may walk right past you and peer into your bedroom windows.

Along with the rooms – designed by Victoria Aspinall – Giraffe Hall will feature a ‘cabana style retreat’ for guest to enjoy a drink looking over the park, with up to 40 people allowed to stay at any one time.

Port Lympne is thought to be the first of its kind in the western hemisphere, and this particular experience is said to ‘offer a luxury safari feel while incorporating the comforts and décor of an English stately home.’

Price-wise, no official number has been released just yet, but prices for the other rooms offered range from £239 per night to £1,750 per night.

The most expensive of these is Lion Lodge, where you can stay in a loft-style apartment with floor-to-ceiling windows set in a lion enclosure.

The two cubs and their mother who live there are known to come right up to the windows, which Port Lympne bosses call a world first.

Not sure what you’d do if you needed to nip out for milk, but there we are.