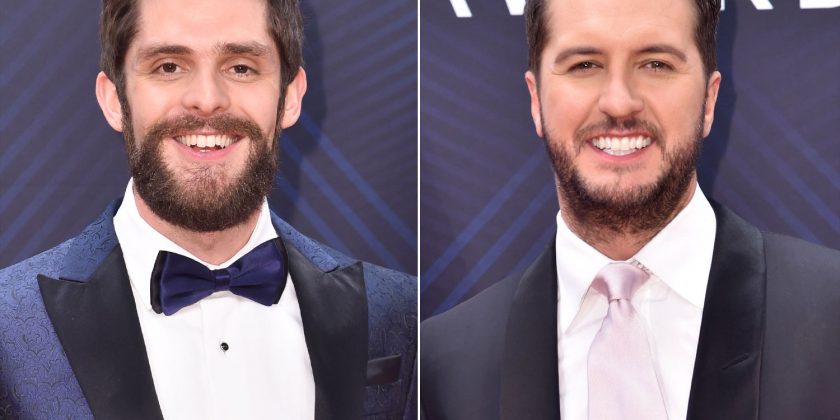 If you watched the 2018 CMA Awards, you know that no one was more shocked than Keith Urban that he won entertainer of the year. What you don’t know – because the TV cameras didn’t show it – is that no one was happier (well, except Urban’s wife, Nicole Kidman) about the result than fellow nominee Luke Bryan.

A two-time entertainer of the year himself, Bryan leapt to his feet when presenter Lionel Richie announced Urban’s name and turned into a fist-pumping and roof-raising maniac. And after Urban descended from the stage and received another hug from Kidman, Bryan was right behind her, ready to wrap his fellow artist in a warm and lengthy embrace.

Hey, who says this is a competition?

The display of friendship was just one of many tender, funny — and human — moments that didn’t appear on the ABC show, but PEOPLE was in Nashville’s Bridgestone Arena to witness it all. Here’s what else you missed:

COMMERCIAL-BREAK CONVOS: While viewers at home were watching the ads, the stars obviously had lots of catching up to do, and during breaks, the aisles filled quickly with intriguing get-togethers. Among those spotted: Hockey fanatic Dierks Bentley shooting the breeze with Mike Fisher, Carrie Underwood’s hockey veteran husband; Kane Brown openly admiring Thomas Rhett’s jazzy “Life Changes” jacket; Russell Dickerson catching up with Jason Aldean about who-knows-what. Of course, you probably didn’t need to be a lip reader to guess the topic of a chat between Hillary Scott of Lady Antebellum and Chris Stapleton’s wife, Morgane. It’s no secret what they have in common: Scott is the mother of 10-month-old twin girls and Stapleton, now pregnant with a fifth child, is the mother of  7-month-old twin boys.

THE REAL DEAL: Michael Ray and Carly Pearce, country’s newest watchable couple, have been professing their devotion to each other for several months now, and after Wednesday night, you can banish any doubt that it’s for real. Ray was making the ultimate sacrifice, giving up his pocket space for Pearce’s makeup. After they made their way to their seats, he could be seen handing her a compact, which she used for a quick touchup. If that ain’t love, what is?

PRODUCT PLACEMENT: Tyler Hubbard and Brian Kelley, aka Florida Georgia Line, arrived at the show ceremoniously carrying boxes filled with mini-bottles of Old Camp, which just happens to be their own label of peach pecan whiskey. As Jason Aldean and Miranda Lambert sang on stage, inspiration struck: Hubbard and Kelley both stood, raised their bottles and took hearty swigs. The song, of course, was “Drowns the Whiskey.”

SOME LIKE IT HOT: In one of their comedy bits, hosts Brad Paisley and Carrie Underwood handed out Nashville’s signature dish, hot chicken, to their fellow stars, much like the famous pizza giveaway at the 2014 Oscars. Those slices were conspicuously devoured, but did the chicken’s recipients do the same for this fiery — and messy — treat? Radio personality (and Dancing With the Stars finalist) Bobby Bones appeared to be the only who actually chowed down, though Underwood was spotted in the darkness taking a portion with her as she made her way backstage. She’s famously vegan, but who knows what a pregnancy craving can make you do.

GUESS WHO DIDN’T GET ANY CHICKEN: A little more than two hours into the show, Thomas Rhett and his wife, Lauren Akins, had to be feeling the effects of a long day that probably didn’t include an evening meal. He pulled a power bar out of nowhere, ripped open the wrapper, and generously shared it with his wife.

LYRICS COME TO LIFE: Two of country’s classic ladies of the ’90s, Martina McBride and Trisha Yearwood, had an impromptu harmonic convergence during one commercial break, and their friendly chat couldn’t escape the notice of one young star seated a few rows away. Lauren Alaina rushed to the two women, who both offered heartfelt hugs and posed for photos. No doubt mutual gratitude abounded. Alaina’s new single, “Ladies of the ’90s,” is a tribute to McBride and Yearwood’s powerful era. Up-and-comer Lindsay Ell jumped in as well to have a picture with the two idols.

BEFORE THE NEXT TEARDROP FALLS: Trisha Yearwood was the object of someone else’s admiration, of course. She raptly listened as husband, Garth Brooks, debuted his moving tribute to her, brand-new ballad “Stronger Than Me.” The TV cameras caught her with an adoring smile and watery eyes, but how could she hold it all in? She didn’t. After the cameras turned away, she finally brushed the teardrops away.

THEY’RE FANS, TOO: There’s no such thing as jaded among country’s biggest stars. They love one another’s music as much as the rest of us, which is why you could see Kelsea Ballerini dancing and singing like no one was watching as Eric Church performed “Desperate Man.” And why Little Big Town’s Phillip Sweet was recording Carrie Underwood on his camera as she sang “Love Wins.” And why Keith Urban, on a darkened stage awaiting his own turn to perform, sang along — and for a moment actually played along on his unamplified guitar — while Luke Combs performed “She Got the Best of Me” at the other end of the arena.

PAST THEIR BEDTIME? Keith Urban thanked his daughters, Sunday Rose, 10, and Faith, who’s almost 8, when he accepted his award. But were they already in bed or still up to see their father win? We’re guessing they got to stay up. At one break during the latter part of the show, Kidman made a video call that surely was to their girls: Urban grinned and eagerly waved into the phone and Kidman air-kissed the screen. The kids probably couldn’t stay awake for their parents to get home, though. The couple lingered long after the show’s end to accept endless congratulations — a strong sign they were headed out to a night of celebration. They made it home before 2 a.m., when Urban tweeted out a thanks to fans from their kitchen.

“Just got home from the most epic CMA night tonight,” he gushed. Kidman then ambushed Urban, planting a smooch on his cheek before rushing away. “Thank you, baby girl,” Urban said sweetly.

“I just want to say thank you to every person that voted,” he continued. “All the fans, you guys are phenomenal. You are phenomenal. You have no idea how much this award means to me. Thank you. The Graffiti U tour has been such a blast, and we’re still on it and on the road. But thank you, every single one of you. Country radio, I love you. This means the world to me tonight. God bless every one of you.”