It was a hot afternoon in Olinda, a coastal city in northeast Brazil, and Marlon da Silva Santos, the leader of a group called Loucos do Surf, or the Crazy Surfers, was shouting from the rooftop of a speeding bus.

I grasped at an edge of the roof with one hand, for balance, and tried to shoot with the other — but the bus passed over a bump in the road, jerking abruptly, and I momentarily lost my balance. I managed to stay on, though my camera nearly flew off from my neck. 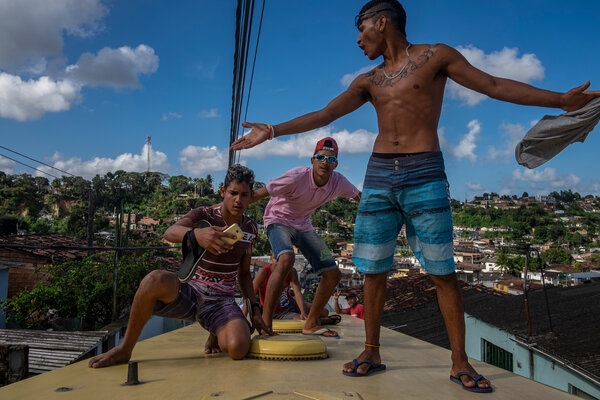 I felt a rush of adrenaline. Traveling at 30 miles per hour along President Kennedy Avenue, I was trying my best to document a group of young Brazilians who were illegally “surfing” on moving city buses.

We saw flashing police lights ahead and retreated into the bus. It was tense inside; the hot sea air swirled around our bodies. Once we passed the sirens, a cheerful celebration erupted as we winded our way to the beach.

The surfers were young, mostly between the ages of 12 to 16, and a majority of them were Black. They wore Cyclone shorts, flip-flops, caps and golden chains — a style that’s common among many young people from the peripheries of large Brazilian cities.

Their presence on the buses made many passengers uncomfortable.

“Some drivers stop the bus, tell us to get off, pick a fight,” Marlon said. “But most follow their normal route while we’re up there.”

“We just want to have fun,” he added as we exited the bus.

I first learned of the Loucos do Surf via a video posted to Facebook. In it, Marlon, then 16, was surfing on a high-speed bus, oozing confidence and taking selfies. Within an hour, I was exchanging messages with the surfers and planning my trip to Olinda.

A week later, I met them at the Xambá bus terminal. They were skeptical at first: “You aren’t a policeman?” they asked.

During my weeklong visit with the bus surfers in 2017, I felt happy and free. In a way, they allowed me to revisit my own roots: During my teenage years, growing up in São Paulo, I, too, engaged in certain risky and transgressive behavior — including pixação, a derivation of graffiti popular in parts of Brazil

The Loucos do Surf are part of a long tradition of performing death-defying stunts involving public transportation in Brazil.

In the 1980s and ’90s, thrill-seeking young Brazilians risked their lives by traveling from downtown Rio de Janeiro to the suburbs on the rooftops of crowded trains. The train surfers, hundreds of whom were seriously injured or killed, became popular in the Brazilian press.

After an intense crackdown, the practice’s popularity waned.

A young surfer named Luciano Schmitt told me that the art of bus surfing was partly a response to a lack of cultural and leisure outlets. “The only soccer field we had was demolished.” Instead, he said, he and his friends prefer “bigu” — the local term for bus surfing — and the beach.

Some bus surfers said the activity was also a form of protest against the price of public transportation — and, more broadly, against the hardships and financial restrictions imposed on millions of young people struggling on the peripheries of society.

At the time, in 2017, Brazil was still recovering from the worst recession ever to hit the country. Youth unemployment rates spiked to nearly 29 percent in 2017, up from around 16 percent in 2014, according to data from the World Bank.

A dominant element of that hardship is the violence that permeates daily life in Black communities on the outskirts of large Brazilian cities — including the neighborhoods of Sol Nascente, part of the city of Recipe, and Alto da Bondade, in Olinda, where the Loucos do Surf group was established.

According to Brazil’s Atlas of Violence, a study released in 2020 by the country’s Institute for Applied Economic Research and the Forum of Public Safety, homicides among Black residents increased by 11.5 percent between 2008 and 2018, whereas homicides among non-Black residents fell by 12.9 percent over the same period. Such data points help expose the racial inequalities that have dominated Brazilian society for centuries — and underscore how desensitized many in the country have become to violence within marginalized Black communities.

Loucos do Surf hasn’t been spared. Marlon — who was known by his fellow surfers as Black Diamond, and who had earned the status of King of Surf for being the group’s most skilled and courageous surfer — was shot at point-blank range and killed near his home in 2018, a year after my visit.

After his funeral, members of the group held a memorial. More than 20 young people balanced atop a bus, singing in his honor.

Gabriela Batista, a bus surfer and a close friend of Marlon’s, told me via text that the group was once like a family. But their enthusiasm for the pastime, she said, largely ended with his death.

When I remember Marlon, my thoughts swirl with the circumstances of his life: the violence he endured, the choices he made, the economic disadvantages he faced, the precariousness of his support networks — including Brazil’s underfunded public education system.

“School doesn’t attract me,” he once told me. “What the teachers say doesn’t stay with me.” Instead, he said, whenever he was sitting with a book, he felt like he was wasting time that could be spent surfing.

And that’s mostly how I remember him now: poised — proudly, deftly, defiantly — atop a hurtling bus.

“Is anything better than this?” he once shouted at me while surfing, the salty air slapping against his face, his eyes bright and alive, his voice carried aloft by the wind.

Victor Moriyama, a regular contributor to The Times, is a Brazilian photographer based in São Paulo. You can follow his work on Instagram.