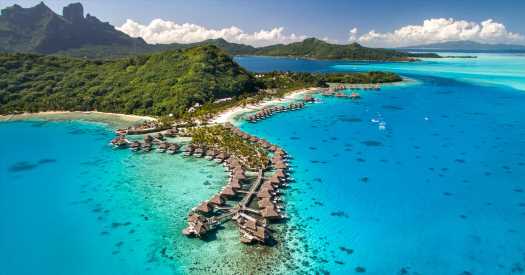 It was an idea born from the tropical desperation of three American friends who had moved to French Polynesia on a whim in 1959.

Their first plan there — to run a vanilla farm — had fallen through, so they resolved to try the hotel business. Tourism was nascent, and international visitor numbers had begun to grow after a new airport opened on the main island, Tahiti. The three men — Jay Carlisle, a stockbroker; Hugh Kelley, a lawyer; and Donald McCallum, a salesman — bought a couple of properties to turn into funky hotels they called the Bali Hai. One was on the island of Ra’iatea.

“It was a little five-room property, on the lagoon, with the reef right in front of it,” Mr. Carlisle, who is 86 and the group’s last surviving member, recalled in a recent telephone interview. But there was a downside. “There was no beach.” 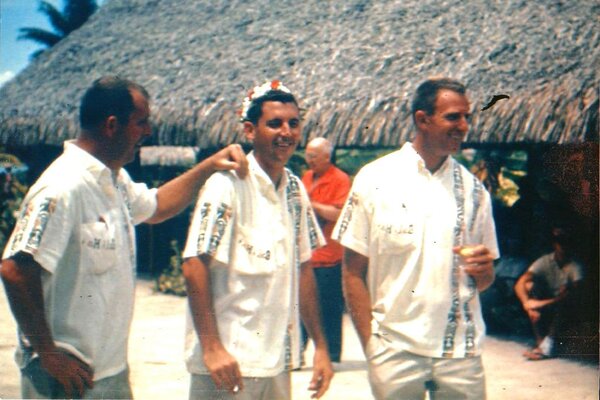 His friend Mr. Kelley had an idea: Why not build a few rooms that sat directly above the lagoon, on piles, joined to the land by a walkway that was set a few feet above the water, too? They built three to start, charging $30 per night per couple. The oddball idea became an instant phenomenon: Now known as an overwater bungalow, the design became the hotel’s signature detail and helped establish French Polynesia as a tropical getaway.

When asked about the bungalows’ appeal, Mr. Carlisle offered some colorful stories. “An old girlfriend of mine said to me, ‘Can you imagine making love in one?’” he said. “It’s so hard to imagine how romantic it is.” Guests could snorkel straight from their room, or even sit inside and observe teeming fish through low, glass-topped coffee tables positioned over cutouts in the floor. Mr. Carlisle recalled a couple from California who would even come with rod and tackle and spend their vacation fishing from their room; the husband would distribute the day’s catch among the hotel’s staff.

In the six decades since, Mr. Kelley’s conceit has spread worldwide. As of May, according to overwaterbungalows.net, there are 225 resorts with the feature, and a total of 8,389 overwater rooms available for booking.

A majority — 132, or almost 60 percent — of these hotel properties are in the Maldives, which has co-opted the Tahitian invention as a signature luxury. Overwater accommodation is also a feature of resorts in Europe — like the Stella Island Luxury Resort and Spa on Crete in Greece — and in Africa, where the architect Jean-Marc Eynaud has adapted the concept for a 60-acre resort on the east coast of Mauritius.

Only five years ago, Sandals Resort was able to build a cluster of overwater bungalows at its property in Montego Bay, Jamaica, and now many other sites across the Caribbean and Mexico have replicated the concept.

The idea has also influenced residential architecture: mansions engineered to hover over artificial water features, like a shallow pond, or the developments that are often bolted onto luxury hotels.

The concept, however, is not without critics. The overwater location makes these buildings vulnerable to hurricanes, while strong tidal systems pose engineering challenges for any structure sitting at a fixed level. For Mr. Carlisle and his partners, collectively known as the Bali Hai Boys, the greatest such problem was waste disposal: Fortunately, Mr. Kelley devised a special septic system, tucked underneath the overwater walkway, that piped sewage away from the clear lagoon water.

There are also concerns about environmental impact. Overwater construction involves driving large concrete piles into the ocean floor, though Mr. Carlisle and his partners found that coral quickly colonized their own hotel’s underpinnings. Critics also say that the shade these buildings cast can disrupt fish’s instinctual behaviors, like migration. As these dwellings have begun proliferating in the Caribbean, governments have been keen to introduce stringent controls on their size and scope.

Vaihiria Kelley, Mr. Kelley’s daughter, said her father and his friends also had to deal with cultural opposition.

“The big argument was that it wasn’t part of the normal landscape for Tahiti,” she said. “But on the island of Huahine, fishermen used rudimentary huts, built over the water, to stay overnight when they were fishing.” Her father and his partners “won approval because of that,” she added.

Indeed, huts on stilts are not unique to French Polynesia. Some of the finest examples, known as fish houses, were built in the early 20th century in Pine Island Sound, Fla., where they were mostly way stations for commercial fisherman to sort and store their catch. A handful remain, including one once owned by the artist Robert Rauschenberg.

“The scale of it is very intimate — it’s tiny, almost a hybrid between a craftsman home and a boat — yet you have a 360-degree view from the porch,” said Claire Weisz of WXY, an architecture and urban design studio in New York City, who is supervising the property’s restoration. Although Rauschenberg’s home, now operated by his foundation, was built in 1942, Ms. Weisz said its condition was surprisingly good after weathering hurricanes and rises in sea level. Built by carpenters whose specialty was overwater construction, it has spaced-apart piles that allow wind and water to pass through harmlessly.

Recently, developers have co-opted the overwater idea for even landlocked mansions, like the $25 million, 11,000-square-foot home in Santa Monica, Calif, currently being constructed for Ira and Alice Rosenberg, a couple who turned to development after retiring from the garment business. A bridge will be required to enter the house, which is being engineered as if it were floating over a water-filled courtyard.

At the Rosewood Mayakoba resort, on the Yucatán Peninsula in Mexico, a full community of residences includes villas with terraces that project over a lagoon at the heart of the development’s 620-acre nature preserve.

But nothing comes close to the four- and five-bedroom Floating Seahorse homes in Dubai, which each cost 20 million euros (about $24.4 million). They form part of the artificial archipelago known as the World, just off the coast, near Palm Jumeirah. Each offers residents the chance to live not just over water, but under it, too, as two of the bedrooms are below the surface.

Josef Kleindienst, chairman of the Kleindienst Group, the project’s developer, said the idea for these properties came from his determination to explore the waters, even though he fears ocean swimming. He said 72 of the planned 133 villas had already been sold, despite the bad publicity that arose when a stand-alone platform the company provided for a New Year’s party in 2017 sank several days after the event, when the structure was empty.

“The platform was designed for waves up to five feet, and, unfortunately, they came up to eight,” Mr. Kleindienst said. “The platform could not take it, but if a Floating Seahorse had been anchored in the same place, it would not have sunk, because it’s technically more advanced.”

The firm has finessed the design since the first prototype, a steel-hulled home featuring cables that tethered it in place, much like a moored barge. Problems with local permits for such vessels prompted Mr. Kleindienst to adapt the concept into a permanently anchored structure. To minimize its environmental impact, he replaced the steel with a water-safe concrete mix.

He said coral could flourish on the concrete, and he was even seeding the ocean floor with baby corals farmed in his firm’s own nursery nearby. Next, he intends to deploy the same technology on a more ambitious project: an entire floating hotel elsewhere on the artificial archipelago. Mr. Kleindienst warned that this building would probably not be ready for at least five years because of engineering challenges.

It will be a fitting monument to overwater bungalows that first appeared in a Tahitian setting. Mr. Kelley’s daughter fondly recalled the original hotel, which has since closed, from her childhood.

“You could remove the top of the coffee table and actually feed the fish underneath,” she said. “It was especially amazing at night, because there were lights under the bungalow, which attracted them even more.” Think of that as Tahitian television, her father told her.

Ms. Kelley said he would be impressed by the reach of his invention now.

“Part of me feels so proud that they’re all over the world,” she said, “but part of me think it’s too bad that it’s mostly unknown they were his idea. I just wish he would have more recognition for putting them on the map,” she added, pausing. “It’s bittersweet.”