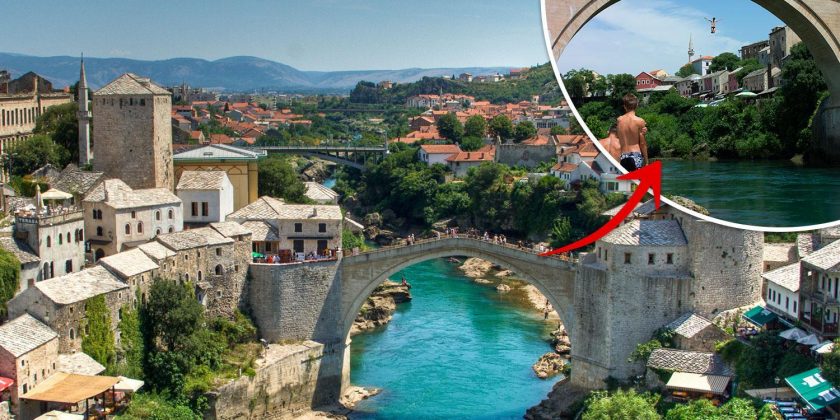 For the past 450 years local lads, eager to impress the girls, have been daring the 80ft leap to the distant waters of the river Neretva. 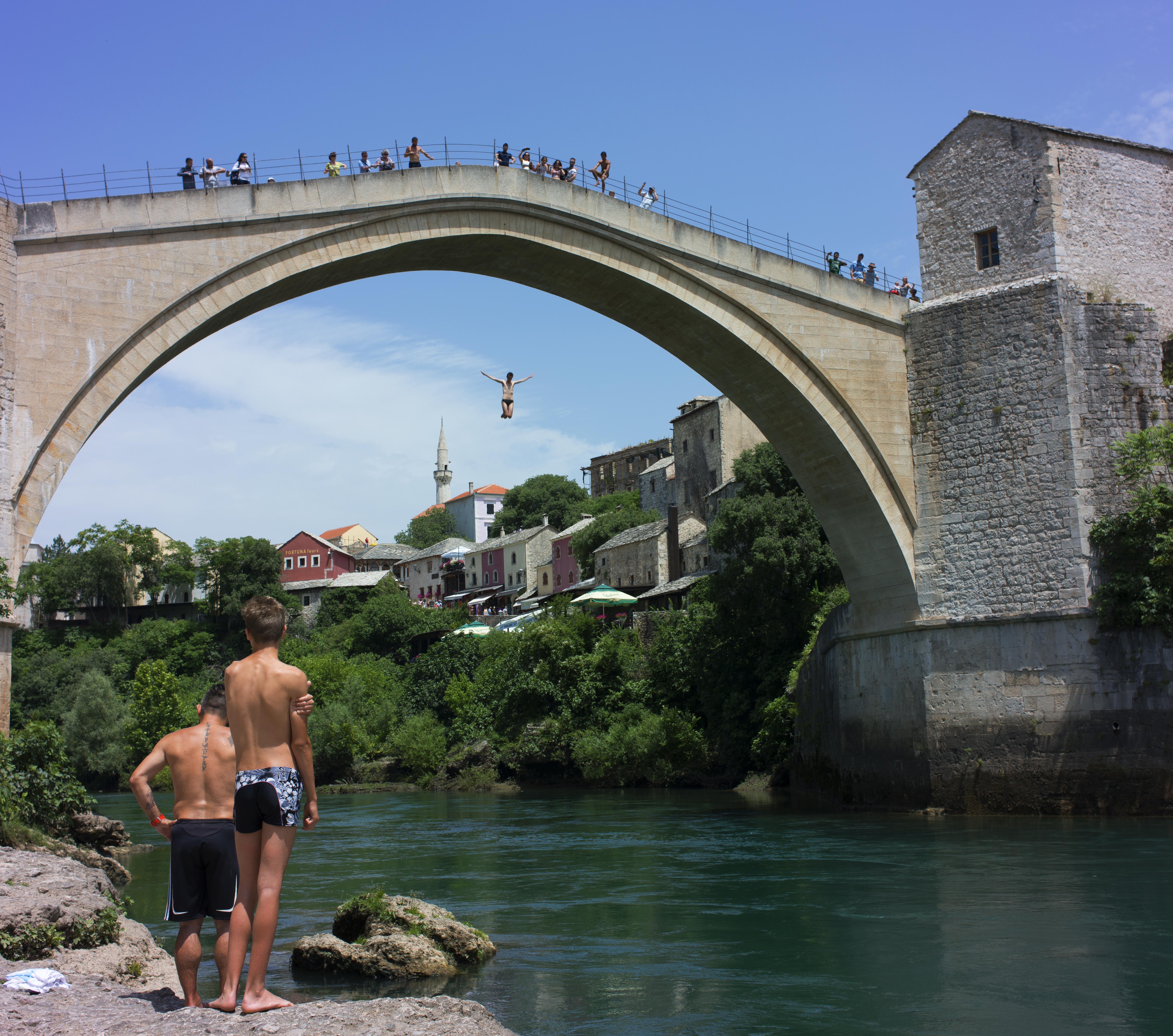 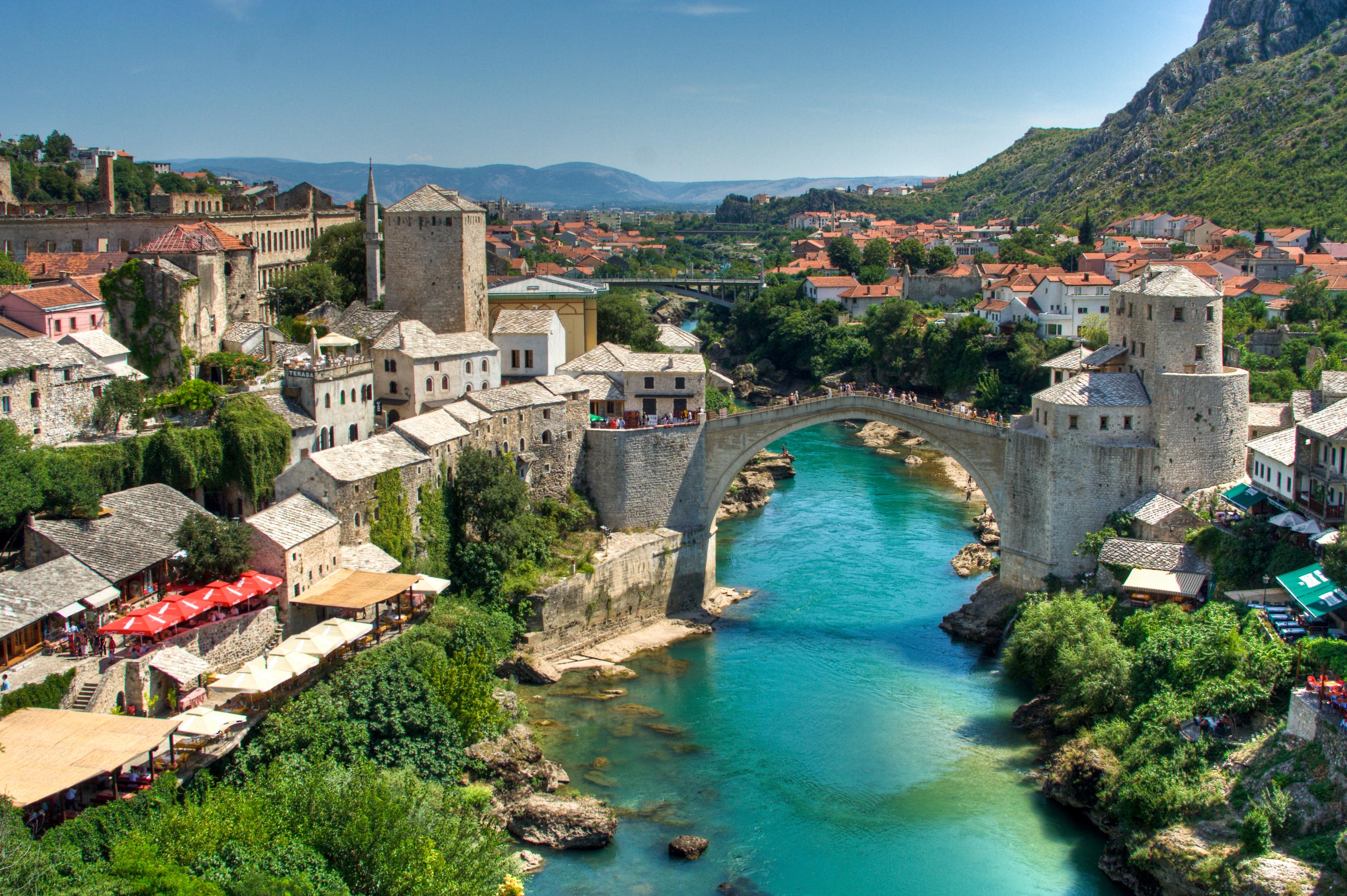 My girlfriend Clemmie, however, made it clear that she required no such act of derring-do and, in fact, would throw me back over were I lucky enough to survive the first time.

We were in Bosnia and Herzegovina for a day trip, having set out that morning from our hotel in Dubrovnik, Croatia.

A regular issue with our holiday planning is that I like exploring while Clemmie prefers to chill by the beach.

As a compromise, we’d planned just this one active day trip across the border. 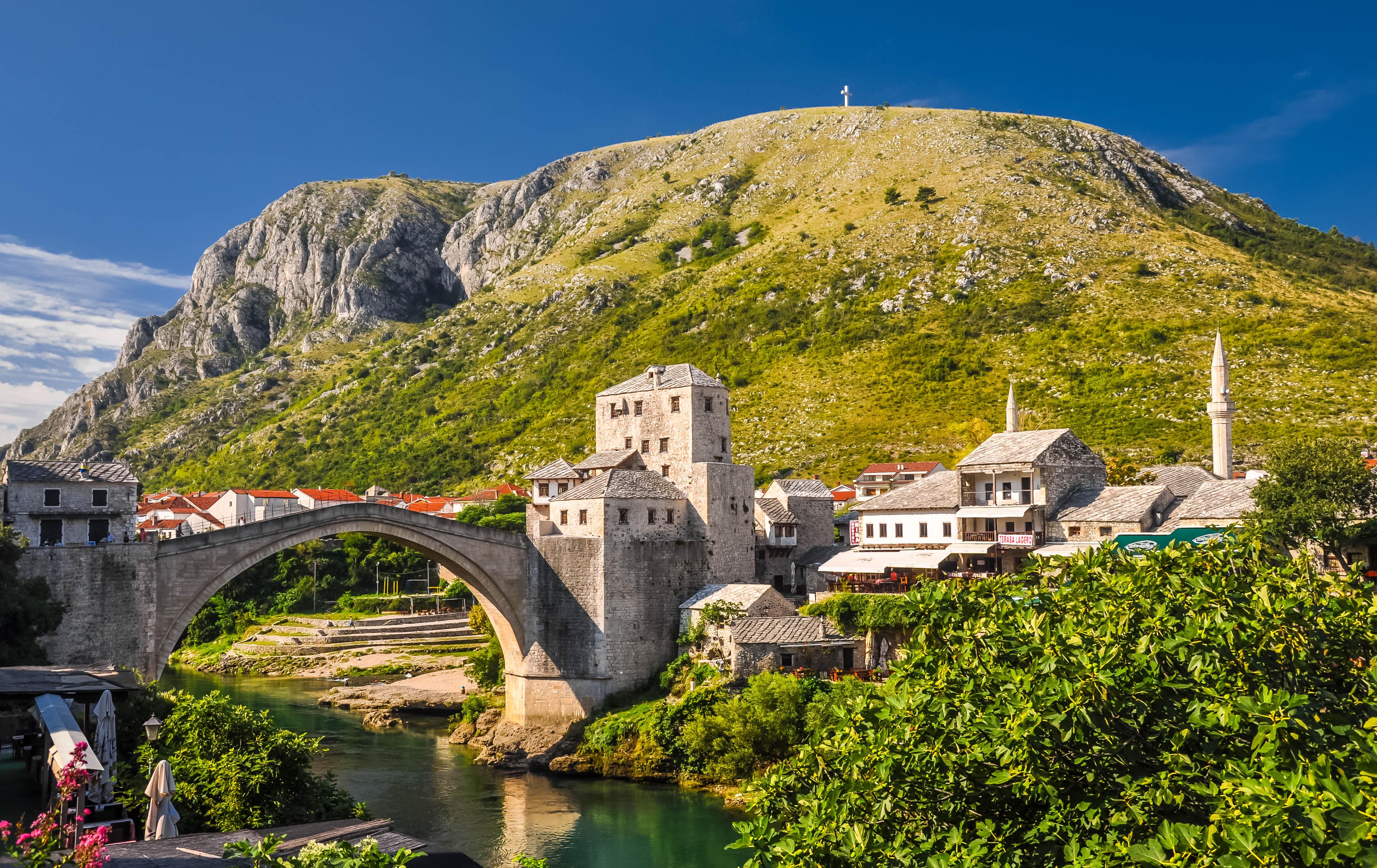 Picked up in a minibus after breakfast, our private tour was pricey, although group trips are considerably cheaper.

After a two-hour drive our first stop was Kravice Falls, a wide cascade of pretty waterfalls.

We swam in the river and soaked ourselves under the pummelling water, though sadly we had to share our shower with what seemed to be half of the country.

It looked more like a Florida waterpark than a natural beauty spot. At this point, I started getting the “I told you so” look, which only worsened as Mostar appeared in the distance as a grey, communist- era sprawl. But we couldn’t have been more wrong.

Dropped off in the old town, it was as beautiful as Dubrovnik but on a much smaller scale.

Tiny, winding streets led us past dozens of ancient mosques and churches before we settled in for a kebab lunch by the river at Bella Vista. 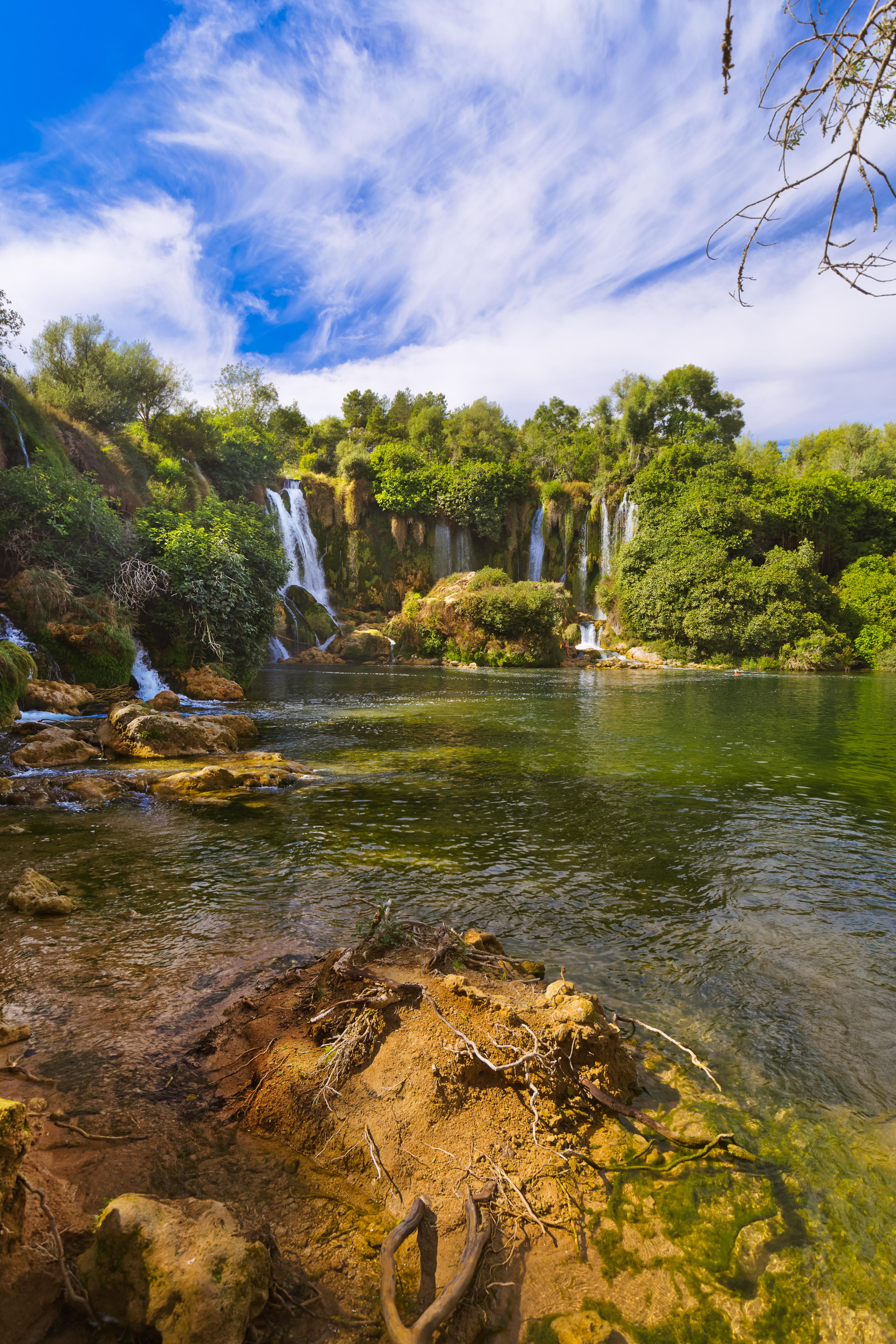 The restaurant has fab views of Stari Mostar — literally Old Bridge — and its death-defying high-divers.

Destroyed in the siege of Mostar, during the Balkans conflict in the early Nineties, the Ottoman construction was rebuilt in 2004 and it is now a UNESCO World Heritage Site.

While we tucked into lunch, one brave local after another leapt from the top, plunging through the gorge towards the turquoise waters before enduring what must have been an almighty wedgie.

Tourists can leap from the site but shouldn’t — at least not without a lesson from a local at the jumping-off point.

For around £20 the Mostar bridge jumpers will do their best to teach fool-hardy tourists how not to kill themselves when hitting the water. 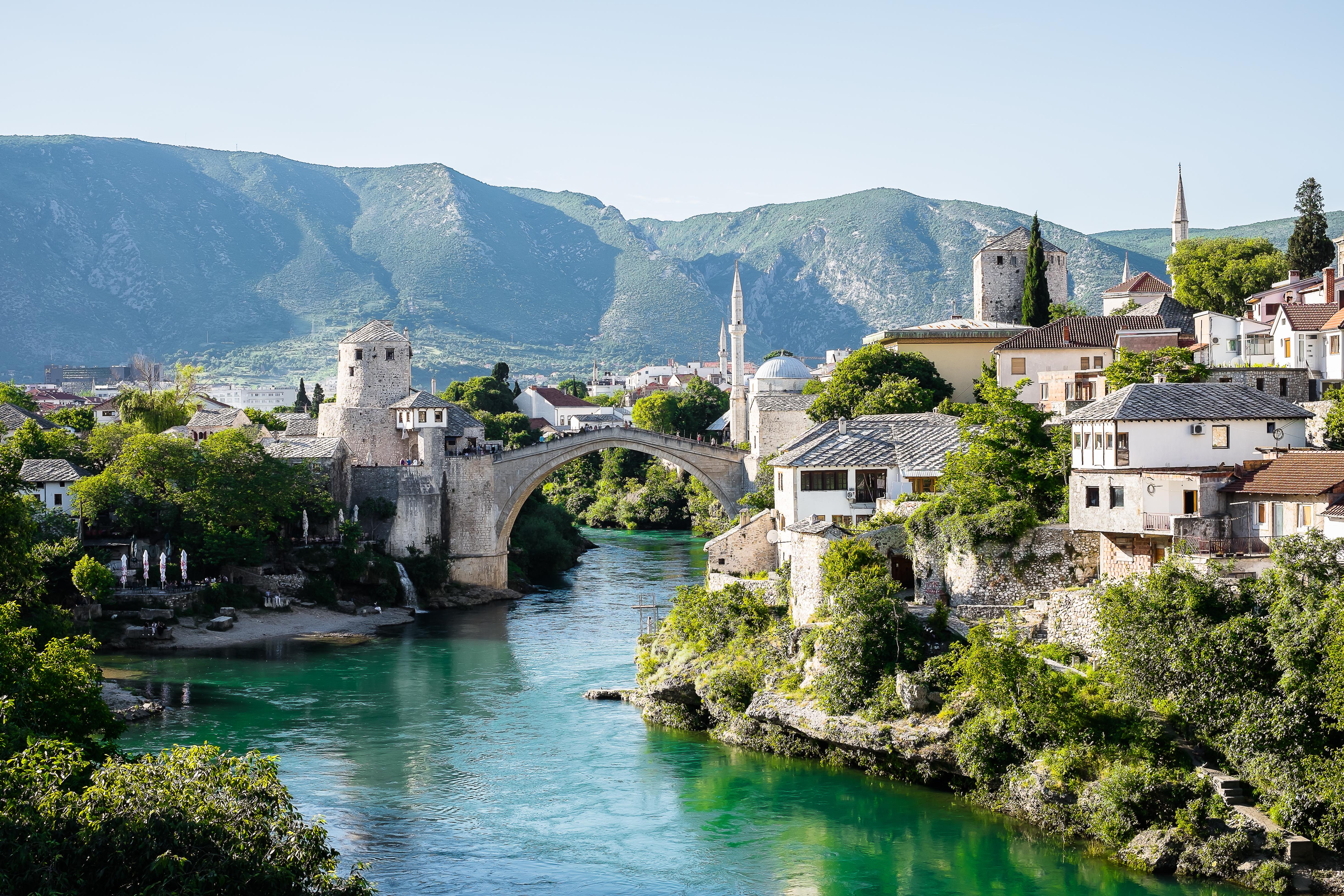 I was happy to have been talked out of it, and we returned safely to Dubrovnik, where we stayed at the Valamar Argosy hotel, ten minutes outside of the old town.

Set on a lovely little peninsula north of the city, it’s one of three hotels within a few minutes’ walk of each other.

Away from the crowds of the old town but just yards from stunning beaches, our room had a lovely balcony overlooking an emerald bay. The recently renovated hotel has a gym, spa and indoor pool which came in handy on a rainy day.

GETTING/STAYING THERE: Seven nights’ B&B at the 4* Valamar Argosy hotel in Dubrovnik is from £441pp based on two people sharing, including return flights from Luton in May.

The restaurant is great, with a large outdoor terrace, or you can order from the outdoor snack bar.

With two big outdoor pools and more than enough sun loungers to go around, we could have holed up there all weekend but the beach was calling.

A five-minute stroll down a small path was a lovely little bay and the Coral Beach Club. Sun beds spread across a stunning cove were from £20pp but well worth the price for the views of the Adriatic.

After enjoying a few too many drinks, we threw our evening plans out of the window and ordered dinner there. While the food wasn’t cheap, the sunset was spectacular. 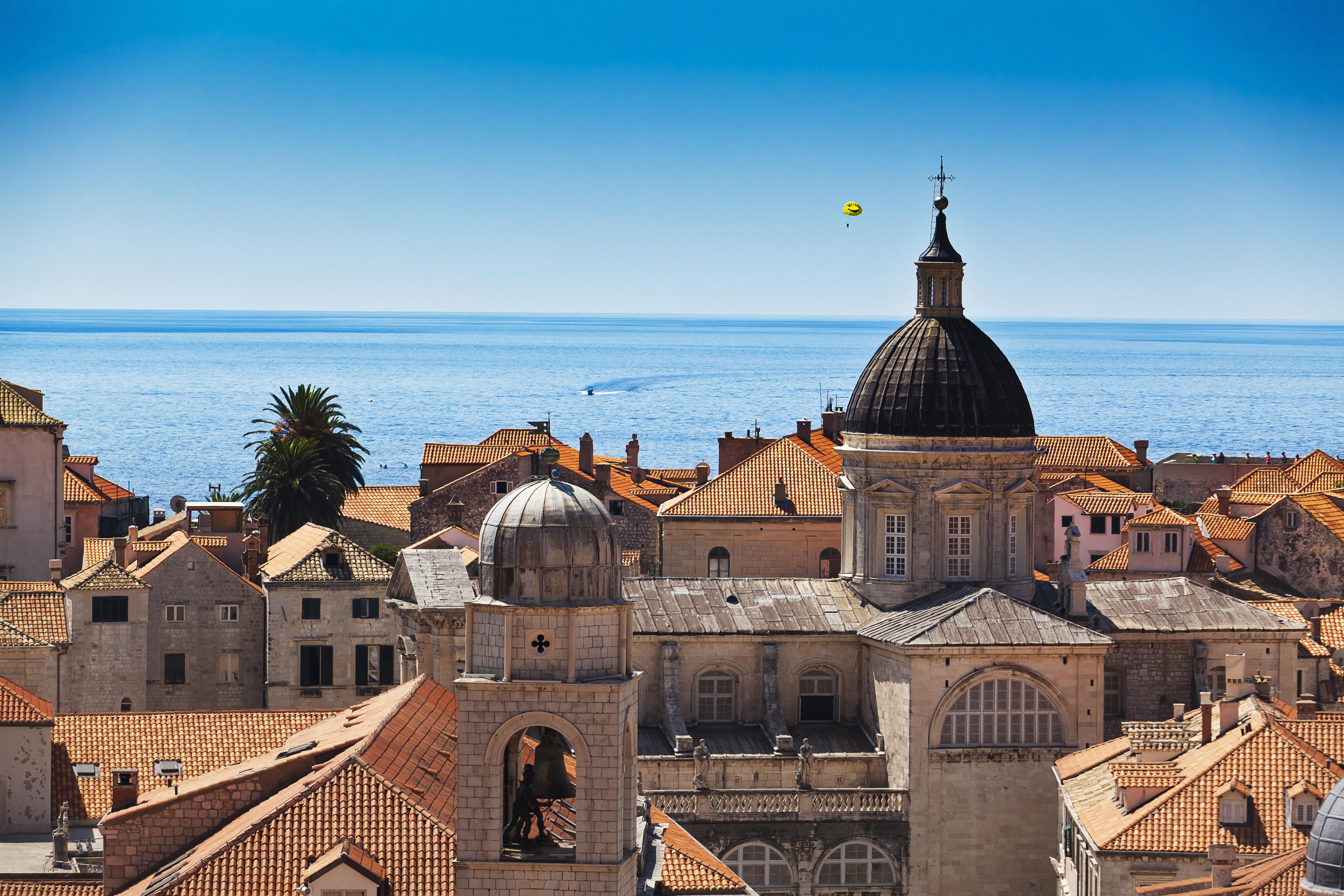 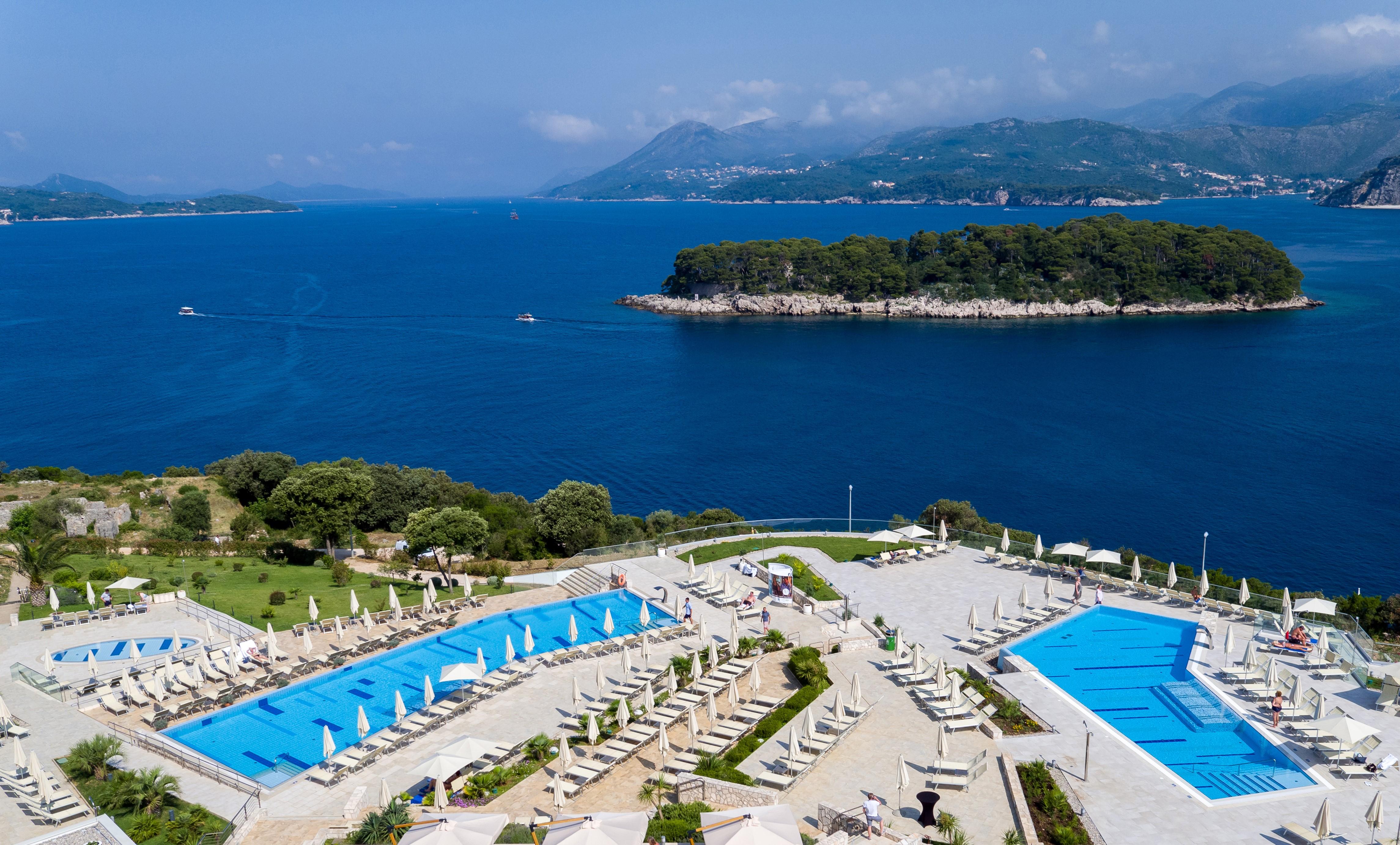 The next day we ventured into the old town — a £1.50 bus ride or a tenner in cab. A lot of the restaurants here are quite similar, with outdoor seating and Italian-style food at good prices.

You might not associate Croatia with Italian cuisine, but it’s just across the Adriatic and you’ll struggle to find a better pizza than in Dubrovnik.

As for the booze, there’s always cheap beer on offer but try the Croatian rose.

If you fancy splashing out on dinner then 360° is the place to go. This fine-dining hotspot was Clemmie’s revenge for the five-hour round trip out to Bosnia and Herzegovina with me.

Our final morning at Valamar Argosy hotel, I savoured the last of the sunshine and jumped from a jetty and into the clear blue Adriatic.

Although, as Clemmie was quick to point out, my form didn’t quite match up to the bridge jumpers of Mostar.