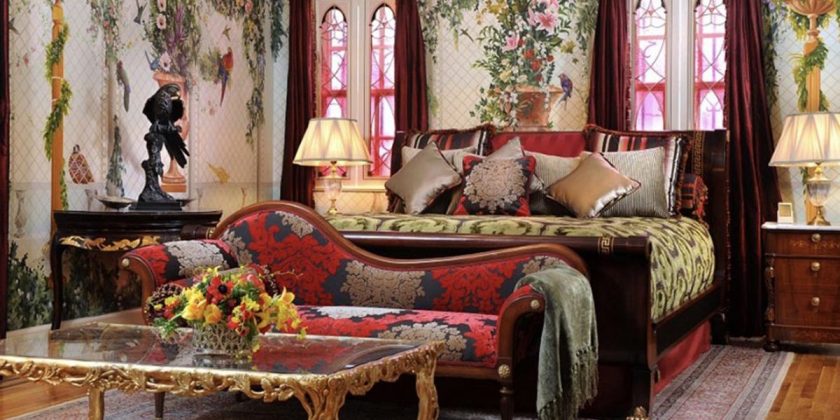 The Assassination of Gianni Versace has just dropped on Netflix, delighting those who missed the show when it had aired on TV last year.

But it’s not just the gripping plot that caught viewers’ attention.

But this isn’t a set created for the show – it’s the real deal.

The Versace mansion still stands to this day and it was here that the bulk of the filming for the show took place.

The impressive property was sold by the Versace family following the fashion designer’s tragic death, and has since been turned into a seriously luxurious hotel, the Villa Casa Casuarina .

Apart from a few changes, the new owners tried to stay as true to the original style as possible.

The breathtaking mansion boasts an enviable location in sun-soaked Miami Beach, and offers ten custom suites which look like something out of a film set.

Versace bought the 19,000 square foot mansion in 1992 for $2.95 million, as well as the Hotel Revere next door for $3.7 million, which he knocked down to turn it into the garden, swimming pool and south wing.

He then invested an additional $32 million, turning 24 apartments into the ten large and lavish suites.

Think king sized four poster beds, plush furniture, intricate decor and plenty of Italian marble, not to mention each room has a separate living room or sitting area, as well as balconies and patios.

Guests staying in the suites will have access to a plethora of glamorous extras such as luxurious amenities from Roberto Cavalli to private butler service.

There’s plenty of time to indulge too, whether they want to make the most of the salon services, enjoy a well-deserved pampering session at the spa.

Then of course there’s the iconic Thousand Mosaic Pool. Inspired by the designer’s ‘Marine Vanitas’ collection, the pool contains thousands of 24K gold tiles for a dazzling effect – and of course it’s the epitome of luxury.

Or you could soak up the rays on the rooftop lounge, hit the hotel’s gym or grab a bite in one of the hotel’s sumptuous restaurants.

So, if you were hoping to stay and take it all in, you’ll have to splash the cash – but the good news is there is a cheaper alternative. If you really want a glimpse inside the mansion, you could book into one of the hotel restaurants for dinner.

That in itself can make for quite the experience, from the delectable fine dining menu on offer to the palatial surroundings that make for an evening unlike any other.

Even the exterior of the mansion is world-famous; after all, it was on the front steps outside the door where Gianni was murdered.

However the gardens and entrances also offer some far less macabre features, from the impressive collection of sculptures to the beautiful plants that line the walls.