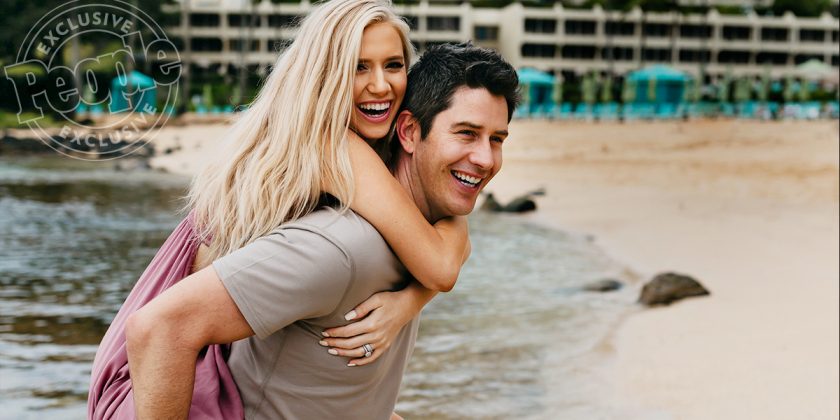 When it came time to plan their post wedding R&R in tropical Hawaii, Arie Luyendyk Jr. and Lauren Burnham knew just what they needed.

“I’m the type of person who loves to do activities when I travel, and Lauren likes to relax,” says Luyendyk, 37, who met Burnham, 27, on his season of The Bachelor in 2017. “So we did a mixture of both!”

The newlyweds tied the knot in a lavish ceremony in Maui on January 12. Two days after the nuptials, they headed to the neighboring island of Kauai, where they stayed at the luxurious Princeville Resort.

RELATED: All of the Photos from Arie Luyendyk Jr. and Lauren Burnham’s Vacation in Iceland and Barcelona

“It was awesome,” says Luyendyk. “We had the Presidential Suite that overlooked Hanalei Bay. It was breathtaking.”

And true to their word, the happy couple combined adventure with leisure.

“We went on a helicopter ride and we got to see the Jurassic Park waterfall,” says Burnham. The next day, “it was a little rainy,” Luyendyk says. “So we got in our huge bath and played Jurassic Park on the laptop!”

On the last day, “We went horseback riding,” says Luyendyk. “We ended up at this waterfall and went swimming and had lunch. It’s pretty funny. We had the helicopter ride, the horseback riding, the waterfall. There were lots of Bachelor-like dates on our honeymoon!”

Now, Burnham admits, “We’ve got a bit of the post-wedding blues.” Adds Luyendyk, “We didn’t want to leave!”

Still, the couple have plenty to look forward to this year, including the birth of their first child, a daughter, in June.

“We’re in nesting mode,” says Burnham. “We’re going to go shopping and get everything ready.”

“Picturing our lives 20 years from now is so cool,” says Luyendyk. “It feels like a lifetime ago that we met on The Bachelor. It’s surreal, and very cool.”

The couple exchanged vows at Haiku Mill 10 months after getting engaged on The Bachelor‘s After the Final Rose special following the controversial finale, when Arie proposed to final pick Becca Kufrin.

“Love is not always perfect,” Luyendyk told PEOPLE in March. “Everyone finds each other in a different way. It’s not always a fairy tale, but as long as Lauren and I have each other, we’re happy.”

For exclusive clips from Arie and Lauren’s intimate wedding video, go to PeopleTV.com or the PeopleTV app!