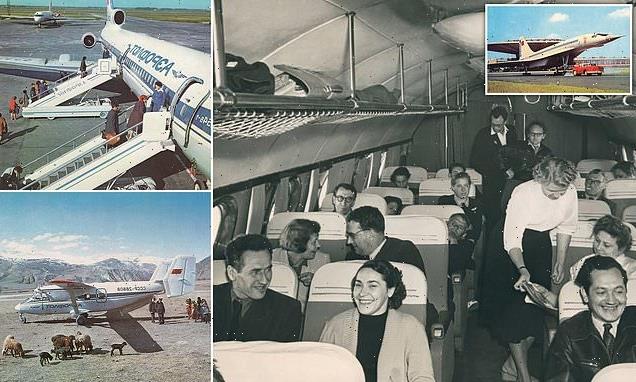 From biplanes to the supersonic ‘Concordski’: Fascinating book unravels the mystery surrounding Soviet carrier Aeroflot – ‘a parallel universe of aviation for 70 years’

‘Winston Churchill described Soviet Russia as “a riddle wrapped in a mystery inside an enigma” – the same could be said of Aeroflot, the Soviet Union’s only airline, which to some degree served as a microcosm of the country itself.’

So writes Bruno Vandermueren in the introduction to his fascinating book Aeroflot – Fly Soviet (Fuel publishing), which unwraps the mystery surrounding Aeroflot by presenting a stunning ‘visual history’ of it.

There’s a lot of material to work with. By the late 1930s, explains Vandermueren, Aeroflot had the largest fleet of aircraft in the world (most of them small Polikarpov biplanes). World War II slowed its growth, but from the mid-1950s onwards the carrier resumed ballooning in size.

In 1958, reveals Vandermueren, the volume of passengers it carried surpassed that of American Airlines. By the mid-1960s one in five air travellers was on an Aeroflot flight and the fleet contained over 7,000 aircraft and helicopters. In 1976, it became the first airline to carry more than 100million passengers a year.

Vandermueren writes: ‘In 1990, the last complete year before the dissolution of the USSR, Aeroflot carried 137,198,200 passengers, about an eighth of the world’s total, though because of restrictions on freedom of movement 96.77 per cent of these flew on domestic flights.’ Aeroflot was, as the publisher says, ‘a parallel aviation universe, one that existed for 70 years, from the very beginning of the USSR through to its demise in 1991′. It was a carrier that was the sole operator of some aircraft types and what the world saw of Aeroflot outside the Soviet Union, Vandermueren says, ‘was just the tip of the iceberg’.

In his book Vandermueren takes readers into the parallel universe, examining ‘Concordski’, the USSR’s (faster) version of Concorde; the jetliner that touched down at Heathrow in 1956, causing as much stir ‘as if a UFO had landed’, and beautiful graphic ephemera, including vintage Aeroflot adverts and magazine covers. Read on for a peek at aviation’s riddle wrapped in a mystery inside an enigma… 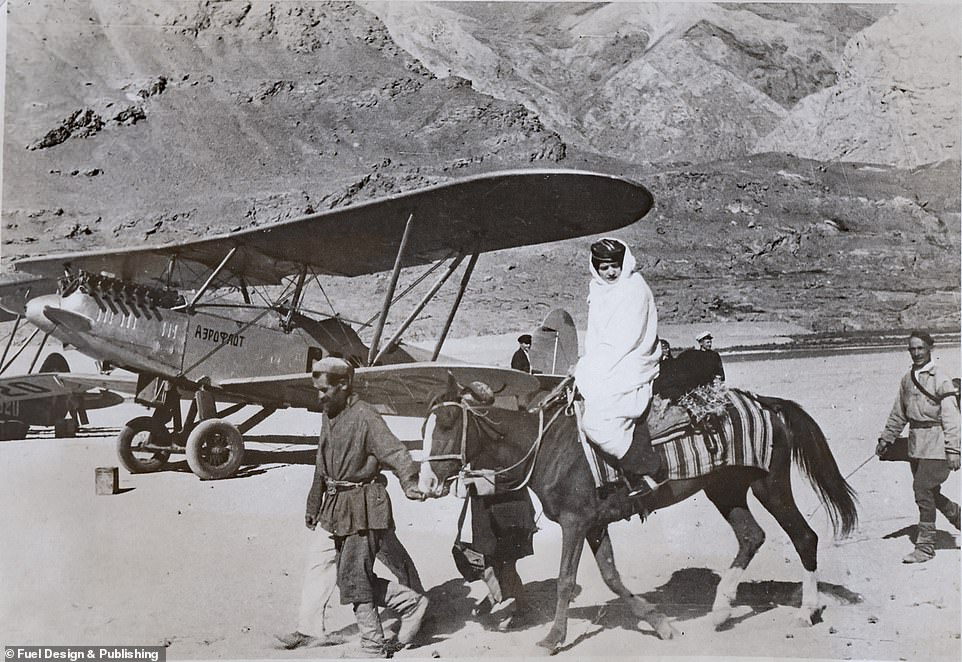 In the late 1930s, most of the Aeroflot fleet consisted of small biplanes like this Polikarpov R-5, reveals Vandermueren. He writes: ‘The route from Stalinabad (now Dushanbe), the capital of the Tajik SSR [Soviet Socialist Republic], over the Pamir mountains to Khorog (pictured here in 1937) is still considered one of the world’s most dangerous air routes’ 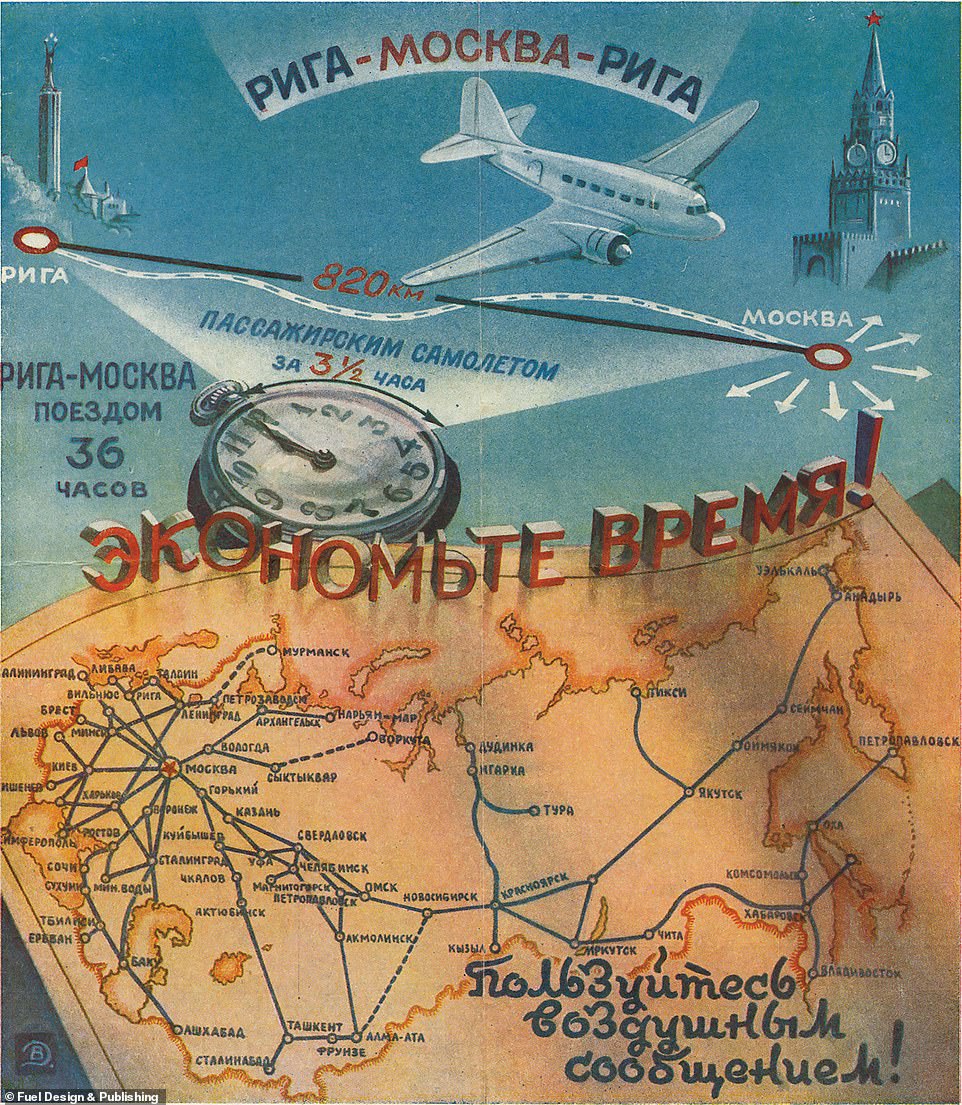 This promotional brochure from 1950 is urging passengers to ‘save time, use air transport’, explaining that it takes 36 hours to travel the 820km (509 miles) from Riga to Moscow by train, but only three and a half hours by plane 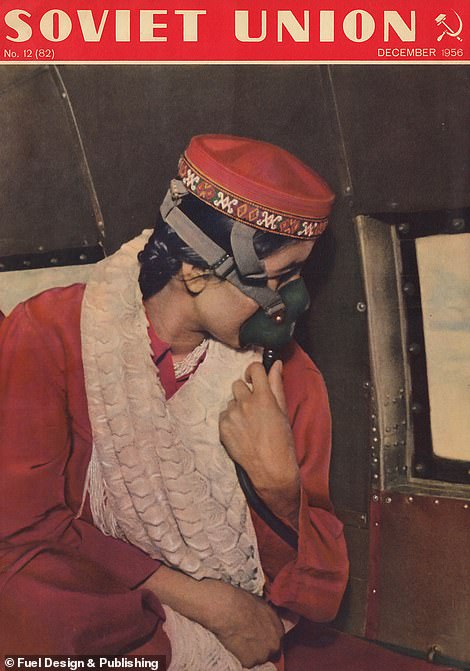 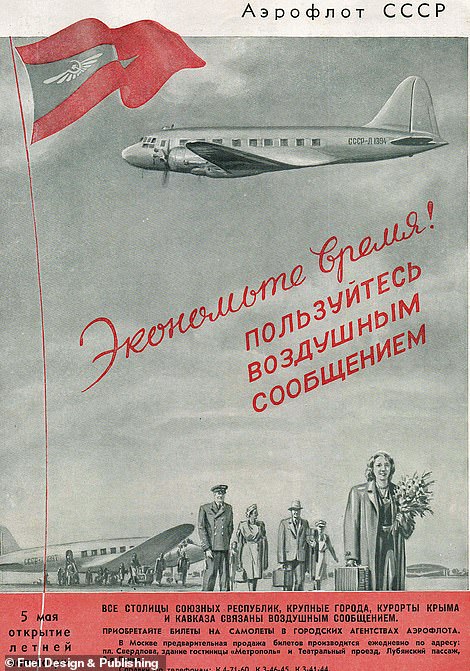 LEFT: This image appeared in Soviet Union Illustrated Monthly in December 1956. The caption read: ‘High above the Pamirs at an altitude of 16,500 feet, passengers have oxygen at their disposal. Pictured is Davlyat Khudododoyeva, member of the Khorog Dance Ensemble, on her way to a concert in Stalinabad.’ RIGHT: This is an Aeroflot advertisement in weekly magazine Ogonek, depicting an Ilyushin 12, the first post-WWII Soviet airliner. The advert is telling the readers: ‘Save Time! Use air transport’ 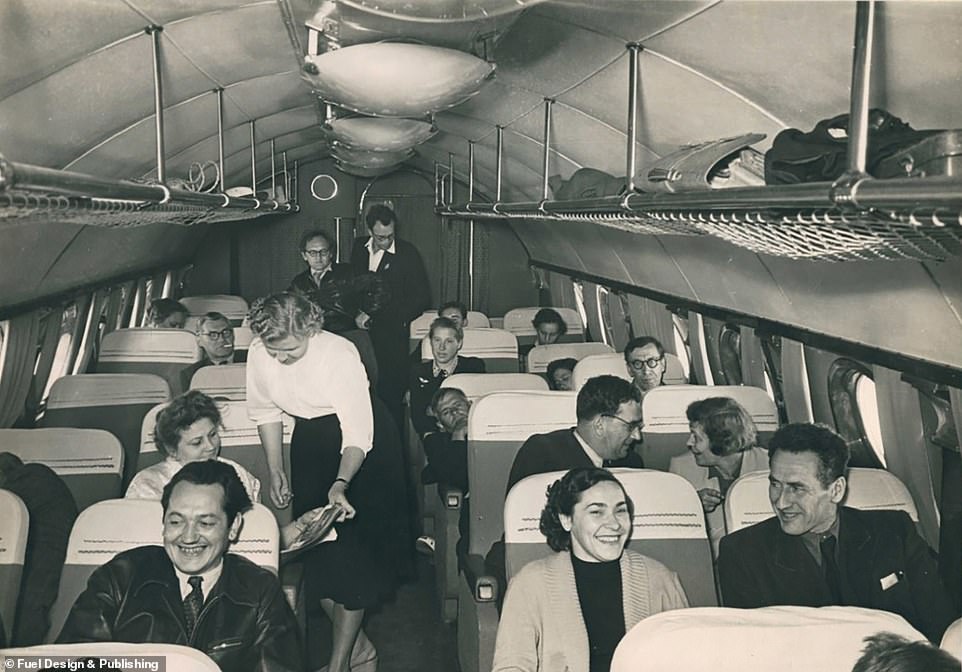 Passengers in the cabin of a Tupolev Tu-104. The 50-seater turbojet-powered airliner made its inaugural flight on June 17, 1955, and in the following year, when this picture was taken, it began flying the route between Moscow, Omsk and Irkutsk three times a week. And it landed in Britain. Vandermueren writes: ‘On March 22, 1956, the Soviets surprised the aviation world when their first passenger jetliner landed at London Heathrow on its maiden international flight. On board were Soviet diplomats and the head of the KGB, arriving in the UK to prepare for the impending state visit of Soviet leaders Nikita Khrushchev and Nikolay Bulganin (Premier of the Soviet Union under Khrushchev). The arrival of the Tu-104 was a sensation, as if a UFO had landed on British soil. The British aviation community and the public responded with high praise and experts were astonished by the giant leap forward Soviet civil aviation had made’ 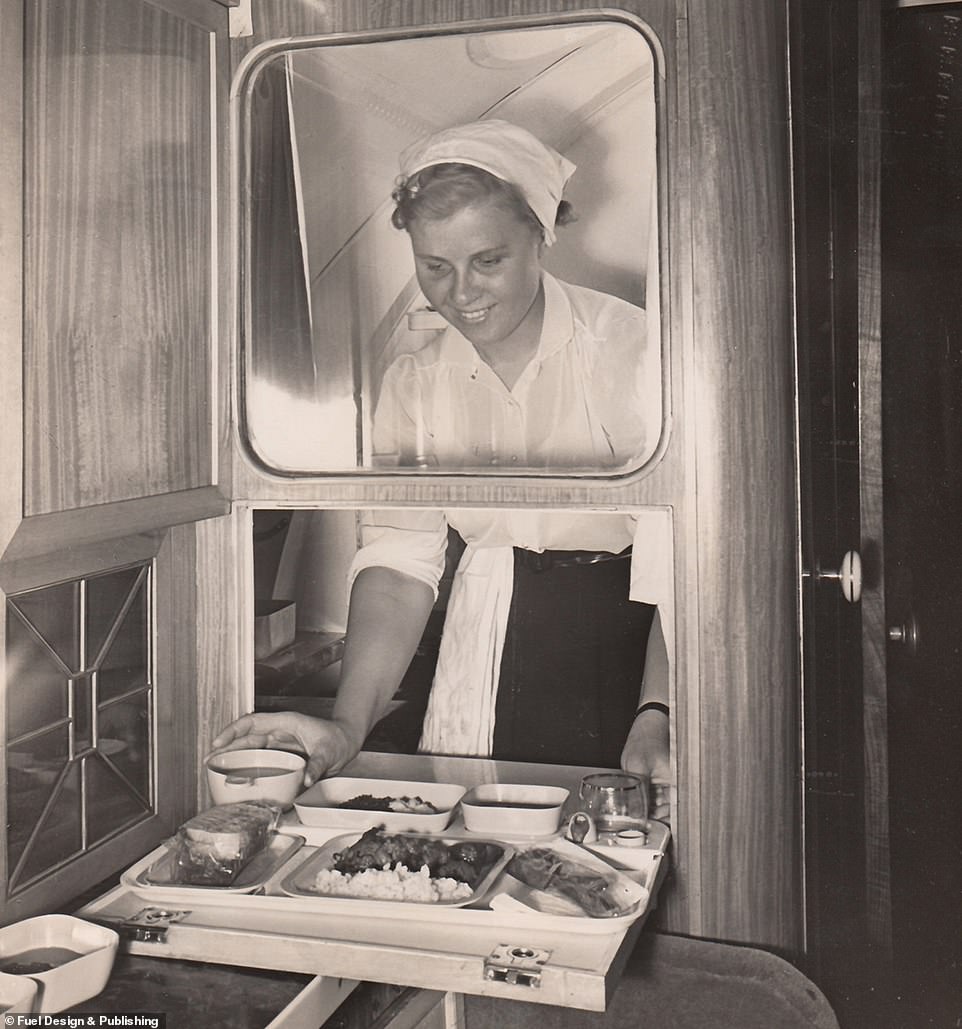 The serving hatch of the Tu-104 kitchen. Vandermueren writes: ‘With the introduction of the Tu-104, the Soviets had gone almost overnight from a fleet of small, slow, uncomfortable piston-driven planes to operating jet airliners capable of reducing travel times by at least 50 per cent. However, the Tu-104 was not the easiest plane to pilot: it was vulnerable to stalling and had a high landing speed. In the early 1960s, a popular rhyme to the tune of a funeral march ran: “The Tu-104 is the fastest plane: it will get you to your grave in just two minutes.” At the time, accidents were common for all types of aircraft, and the Tu-104 was no exception. Following a fatal accident in Moscow on March 17, 1979, the Soviet Ministry of Civil Aviation ordered the phasing out of the jet, and before the year’s end Aeroflot had retired its last Tu-104. After more than 23 years of service, carrying 100million passengers, the era of the first Soviet jet airliner was over’ 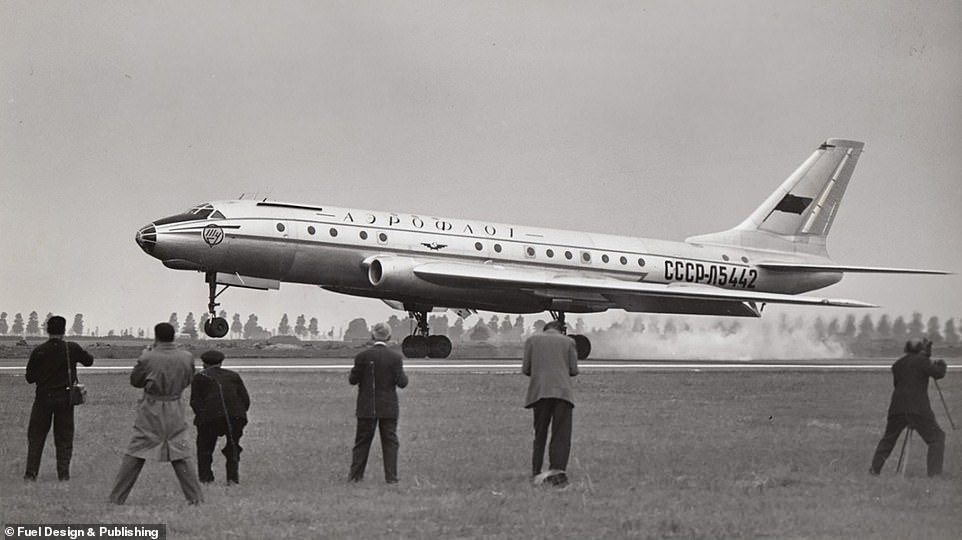 Press photographers capture the first arrival of a Tu-104A at Amsterdam on July 7, 1958

An Aeroflot ticket office at 33 Avenue des Champs-Elysees, Paris, in the 1970s. Vandermueren writes: ‘Outside the USSR, Soviet airliners were often regarded as unsafe and uneconomical – as inferior imitations of their Western counterparts. In fact, however, the Soviets successfully developed many airliners and helicopters in accordance with stringent regulations to meet the specific requirements of Aeroflot operations. These aircraft proved to be reliable machines, in many ways comparable with their counterparts in the West, if fundamentally different in design approach. From the mid-1950s on, the safety record of Soviet airliners gradually improved and became akin to that of the West, contradicting a persistent reputation for poor safety’ 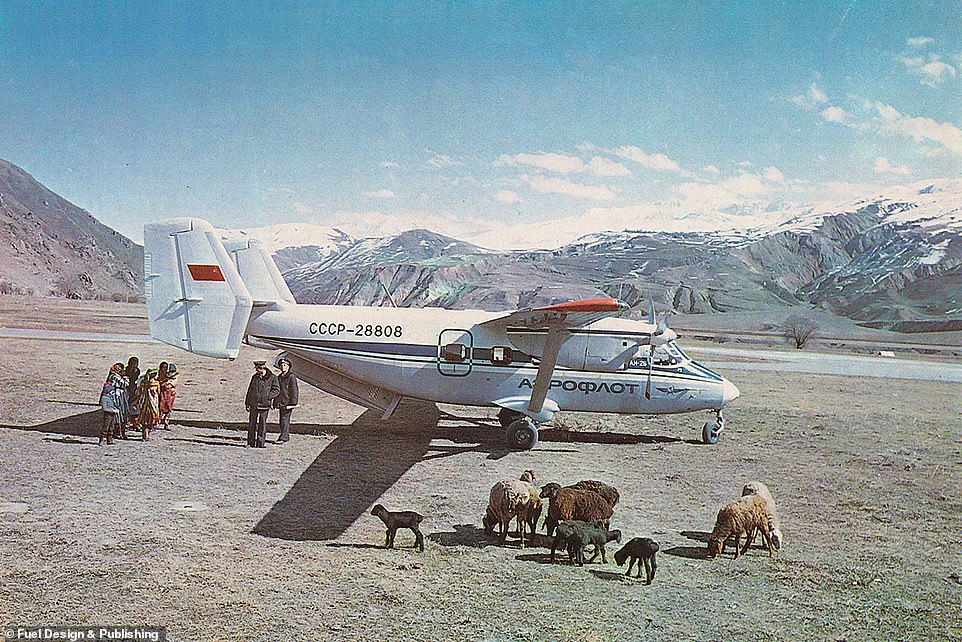 This 1986 picture shows an An-28 of Aeroflot’s Tajikistan Directorate. This aircraft entered service in 1984 and, Vandermueren reveals, ‘saw limited use, being employed mostly in Siberia and in the hot and high-altitude conditions of the Tajik Soviet Socialist Republic’ 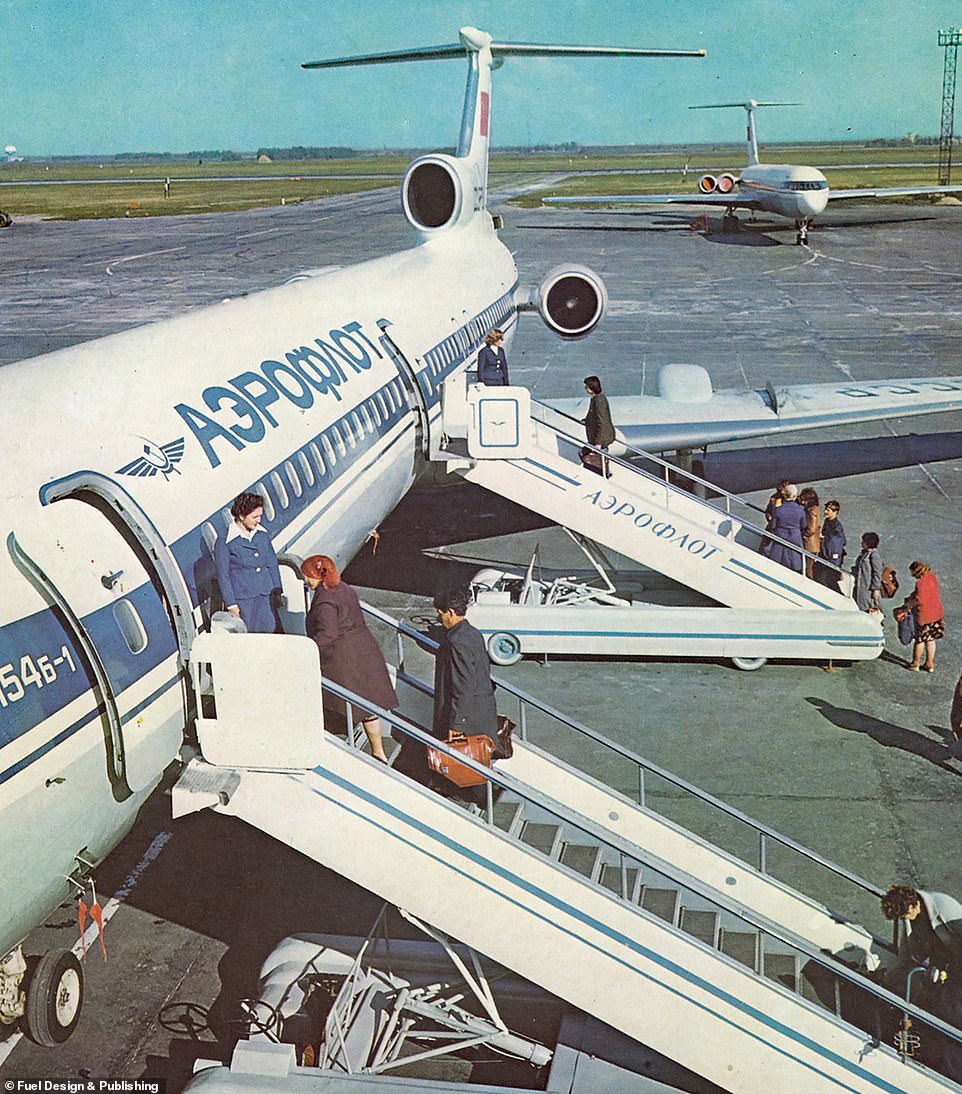 Passengers board a Tu-154B-1 at Novosibirsk in 1983. Vandermueren writes: ‘This 164-seat jetliner was the first to be devised by the Tupolev Bureau specifically as a passenger aircraft, with no lingering connection to the design of strategic military bombers.’ The aircraft’s maiden flight was on October 3, 1968. Passenger operations began in 1972. Vandermueren reveals that it became a ‘workhorse’ of the fleet and was exported to 20 countries. However, it was ‘also involved in the darkest day of Soviet aviation history’. The author writes: ‘ On Wednesday July 10, 1985, flight SU7425, a Tu-154B-2 from the airline’s Uzbek Directorate, departed Karshi airport en route to Leningrad via Ufa. While cruising at 38,000 feet at too low an airspeed, it stalled, went into a flat spin, fell from the sky and crashed in the Uzbek desert, killing all nine crew members and 191 passengers. Investigators concluded that crew fatigue had been a major factor in the accident’ 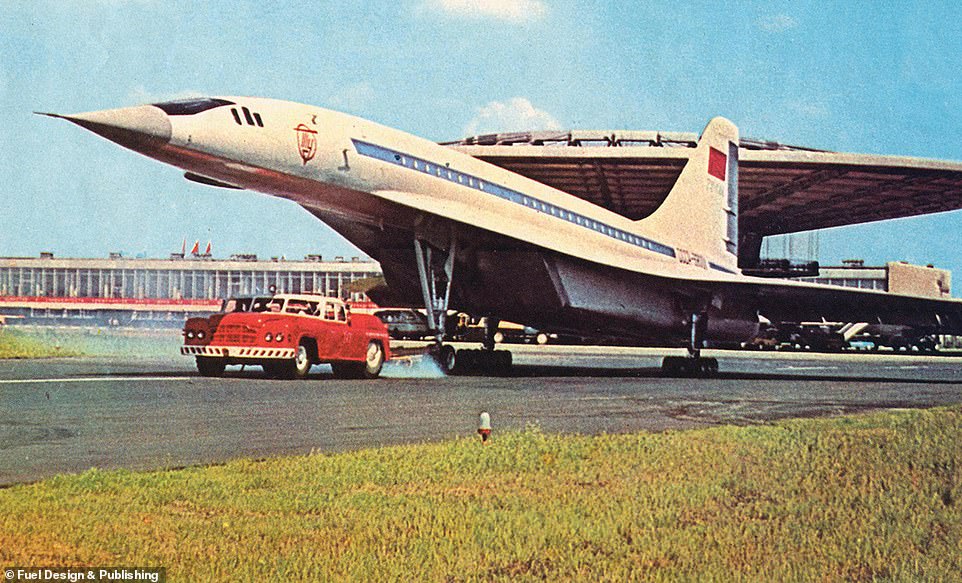 The prototype Tu-144 at Moscow Sheremetyevo in 1969. Vandermueren explains that the Tu-144 was the Soviet Union’s (slighty faster – Mach 2.35 vs Mach 2.2) answer to Concorde – and ‘was derisively nicknamed “Concordski” in the West’ (with the West accusing the Soviets of stealing technical data for Concorde to build it). It made its maiden flight in 1968, a full two months before Concorde took to the skies for the first time. The Tu-144 broke the sound barrier on June 5, 1969, and a year later became the world’s first passenger airliner to exceed a speed of Mach 2.0. A heavily tweaked version began commercial operations on November 1, 1977, flying from Moscow’s Domodedovo Airport and arriving in Alma-Ata two hours later. This journey takes just over four hours today. However, after the fatal crash of a new version of the Tu-144 during a test flight in 1978, supersonic passenger travel in the Soviet Union was halted, having been running for just seven months. The commercial need for it had evaporated, explains Vandermueren, who adds: ‘The two Tu-144 aircraft assigned to Aeroflot made only 102 flights for the airline, 55 of which had carried a total of 3,284 passengers.’ The plane continued to be used for urgent freight services and in the 1990s Nasa used it for research into the next generation of supersonic aircraft. Today, explains Vandermueren, only seven Tu-144s exist. One stands next to an Air France Concorde in the Technik Museum Sinsheim in Germany 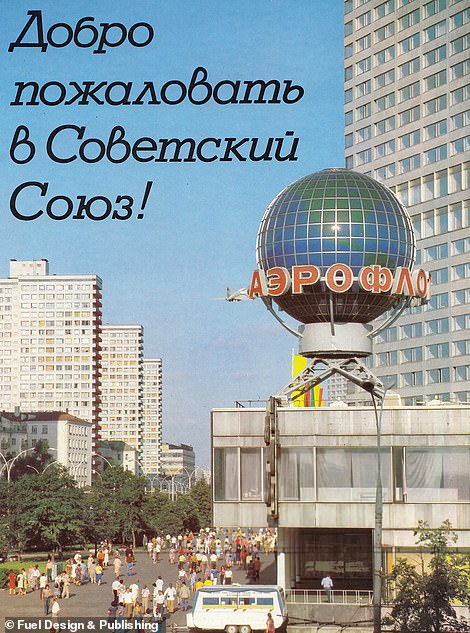 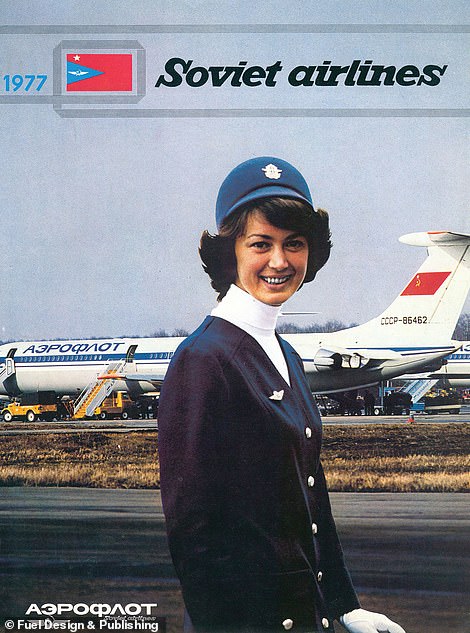 LEFT: This is the cover of Aeroflot 82 magazine, which proclaims ‘Welcome to The Soviet Union!’ The picture shows the famous Aeroflot Globe rotating above the Arbat Restaurant in Kalinin Prospekt, Moscow. RIGHT: Flight attendant Tatyana Zinchenko on the cover of Aeroflot’s inflight magazine Soviet Airlines, No.3, 1977. In the background is a narrow-body Ilyushin Il-62M jetliner in the standard livery introduced after 1973 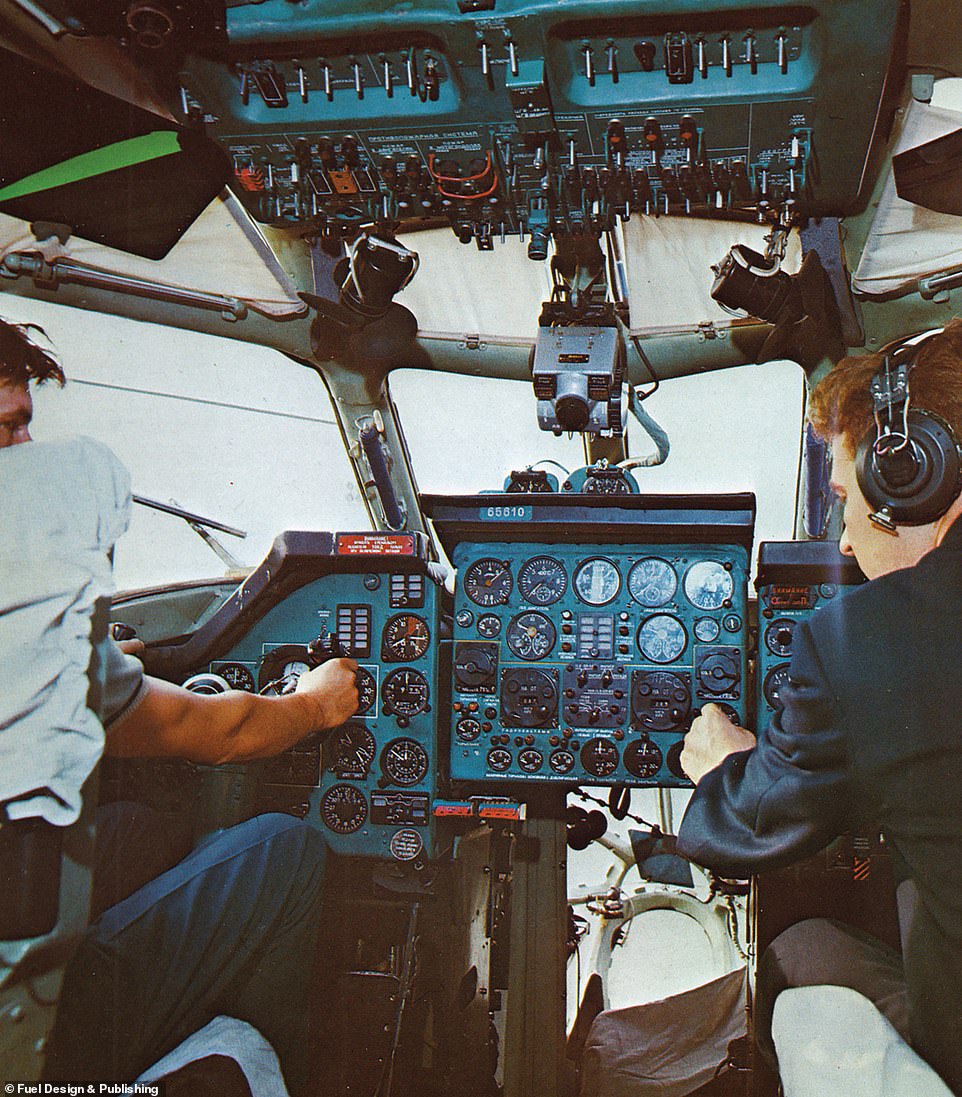 The flight deck of a Tu-134, pictured in the early 1970s. The prototype of the Tu-134 made its inaugural flight on July 29, 1963. Vandermueren explains that between 1966 and 1984, a total of 852 Tu-134s were produced at factory 135 in Kharkov. The author continues: ‘Nicknamed “Whistler” because of its high-pitched engine sound, the plane proved both popular and reliable. Accidents did occur, but it wasn’t always technical issues with the aircraft that were to blame’ 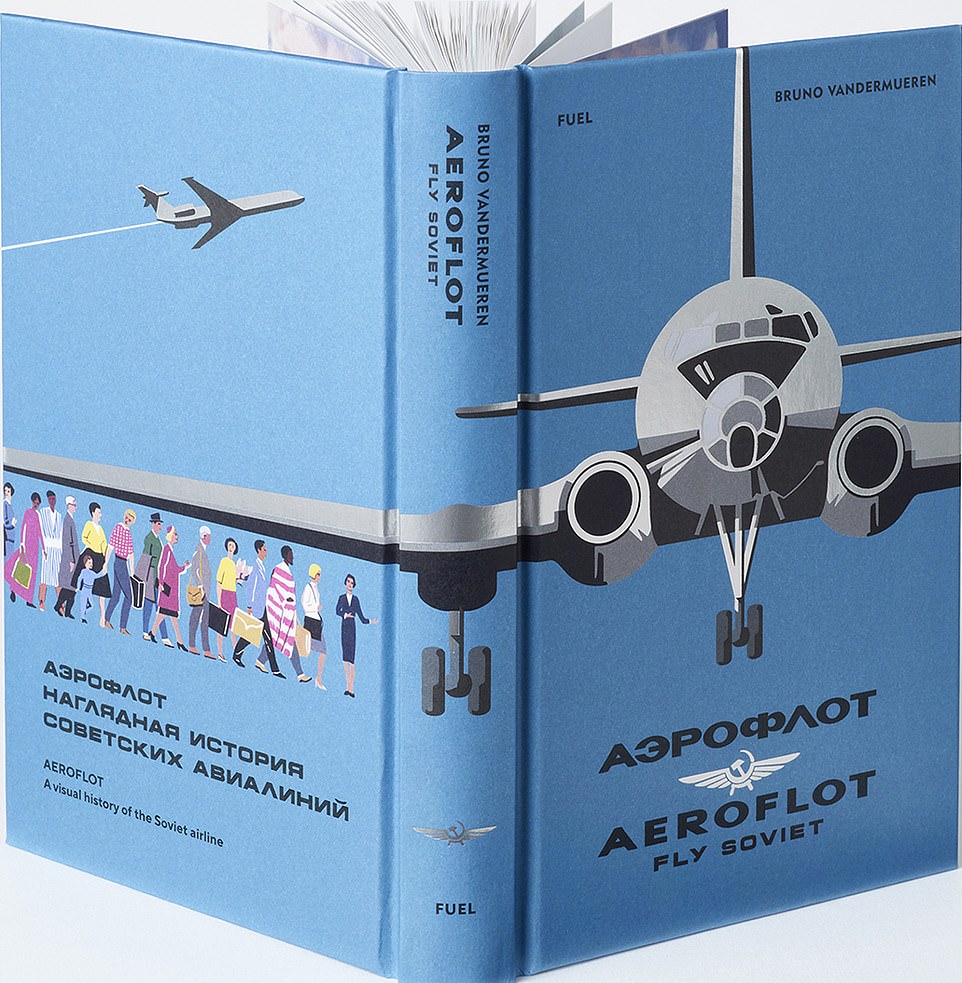