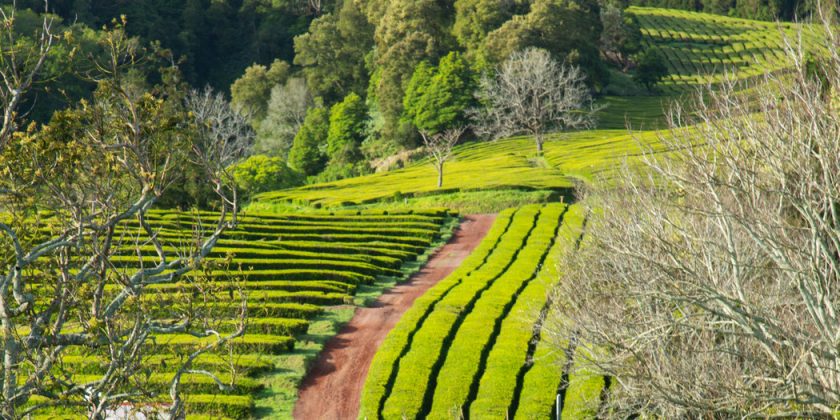 Living on a remote island at the mercy of nature demands resiliency, and the Azores do qualify as remote: nine volcanic islands in the middle of the Atlantic Ocean, 850 miles off the coast of Portugal, their protectorate. The Azores are known for volcanic craters, natural hot springs, 600-foot waterfalls, mountains, cerulean lagoons and dense forests.

But it has not always been idyllic on the islands. Throughout their history, Azoreans have had to overcome disease, volcanic eruptions, earthquakes and hurricanes that have decimated their food supply and threatened their economy and survival.

But they are masters of reinvention and ingenuity: They have learned how to cultivate tea and coffee, plants that are not native to the islands but flourish in the temperate climate and mineral-rich volcanic soil. They have also preserved and perfected centuries-old traditions in cheesemaking and wine production to ensure sustainability and safeguard their culture. They proudly share their agrarian heritage with travelers seeking an authentic Azorean experience. 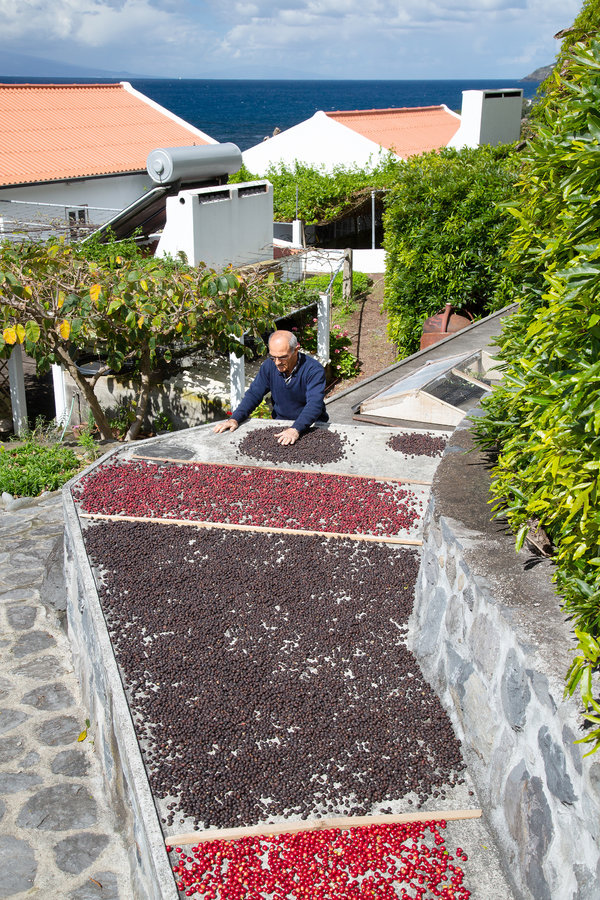 I had to walk briskly to keep up with 66-year-old Manuel Nunes. He climbs the hillsides of his coffee farm with the sure-footedness of a ram, easily negotiating the rocky terrain. His muscular fingers are adept at plucking the beans swiftly from their stems. He will dry them in the sun and roast them on his stovetop in a cast iron pan, to sell as beans and to serve as coffee at Café Nunes in Fajã dos Vimes, a village of 70 people on São Jorge Island.

Mr. Nunes’ tiny farm is the largest plantation in Europe, with 700 plants yielding approximately 1,600 pounds of coffee annually — tiny when compared to major coffee-growing countries. The low altitude coupled with high humidity makes this microclimate ideal for growing arabica coffee. There are no insects on the island that destroy the beans so no chemicals are required. The result is a strong cup of Joe without acidity. Mr. Nunes does nearly all the work himself, including the long harvest from May to September.

“It’s what I love to do. It’s my passion. It’s where I belong. I feel well here,” he said (his daughter, Dina Nunes, did the translating).

The plants came from Brazil, though no one knows exactly how they arrived. “A lot of people immigrated to Brazil in 1800s after the 1757 earthquake, but some returned, probably with seeds or plants,” Ms. Nunes said.

At first, Mr. Nunes grew coffee for his own consumption and, as was the custom, to serve to his wife’s clients while they considered purchasing one of her handmade bedspreads.

Maria Alzira A. Nunes is renowned for a style of weaving called high point, one of the island’s most famous handicrafts. On a wooden loom built by her husband, she weaves together a patchwork of predominantly red and yellow squares and rectangles, a technique passed down from her great-grandmother.

At first only locals came, but the Nunes’s reputation grew, and now tourists as well as locals come to buy coffee, tour the plantation and watch the bedspreads being made.

Queijaria Canada is a small, family-run cheese factory in the farming village of Santo Amaro on São Jorge Island. The enterprise has one vat that is filled with fresh milk twice a day by João Silveira after he milks his cows. His mother, Graça Silveira, separates the curds and whey. Her husband and João’s father, Manuel Silveira, presses the curds into round molds to give the cheese its shape. After 48 hours, the molds are removed and the cheese is stored on crude wooden shelves to cure for 60 days.

Manuel Silveira is a third-generation cheesemaker. He produces only one type, called Canada, a semihard, spicy cheese with a buttery tang similar to other cheeses produced on São Jorge. He sells about 3,700 pounds a year to restaurants and specialty stores on the other islands, in Portugal and at his dairy’s shop, where visitors can sample the cheese and see it being made.

“If you go to a restaurant here or on another island, they will ask if you want the cheese of São Jorge or if you want the normal cheese,” Mr. Silveira told me (Dina Nunes again did the translating). “Normal cheese” in this case means whatever brands have been imported.

Cheesemaking in the Azores dates to the 15th century with the arrival of Flemish settlers, who, through a royal decree by a Portuguese prince, Henry the Navigator, were brought to the Azores for colonization.

Mr. Silveira makes cheese in small batches to ensure the flavor is consistent. (The cows eat lots of organic green grass, and you can taste it in the cheese.) He sends soil samples to the University of the Azores on São Miguel Island for analysis to determine what the land needs.

“We make this cheese with intelligence, love and passion. It’s very important. If São Jorge doesn’t do it, another island will, and on São Jorge, we are farmers. We need this tradition to survive,” Mr. Silveira said.

On a clear day from São Jorge Island, you can see Mount Pico on Pico Island. A short ferry ride will take you there. Mount Pico is 7,713 feet tall and its towering height is one key to the island’s successful viniculture.

“This huge mountain grabs most of the clouds so we have more sunlight here than on the other islands,” said António Maçanita, the co-founder of the Azores Wine Company. It has 247 acres of vineyards and produces 40,000 bottles of wine a year.

Here, the vines grow on the ground rather than on trellises. Instead of being hindered by an overabundance of volcanic rocks, the Azoreans have used them to their advantage. Black basalt walls protect the vines from harsh wind and seawater and keep them warm with heat retained from the sun — although temperatures rarely dip below 52 degrees or exceed 80 degrees. These three-foot tall rectangular pens, called currais, are visible all over the island at vineyards and farms and in backyards, where wine is produced for personal consumption.

“Salt is terrible for a vineyard, but the vineyards that have survived here are from here and can take a bit of salt,” said Mr. Maçanita, who makes white wine using the indigenous grapes verdelho, terrantez do Pico and arinto dos Açores. Each varietal has its own distinctive notes but share a refreshing blend of fruit, mineral and salt, much like the Azores themselves. It’s the only white wine I have ever tasted that I have liked.

Grapes have been cultivated on Pico since the 15th century, after early settlers recognized the vines fared well in the volcanic soil. With an influx of new immigrants came different grape varieties, and a thriving export business to the United States, Europe and even Russia until the mid-1850s, when its vineyards were devastated by twin plagues of mildew and vermin.

“One way we survived that crisis was by planting rootstocks from America and Europe that were more resistant to mildew, a tradition we maintain today,” said Ana Ferreira, the marketing director at Pico Wines, a cooperative of 300 members who grow the grapes from which the wine is made and share in the profits. The co-op was formed in 1949 to help resuscitate the declining industry.

The crumbling currais were rebuilt, native grapes were replanted, and a cultural legacy was revived. In 2004, Unesco recognized the efforts when the landscape of the Pico Island vineyard culture was named a World Heritage site.

“It’s pretty extreme to do grapes here but when you mix these factors — volcanic soil, proximity to the ocean, this latitude and three indigenous grapes — the taste is completely different,” Mr. Maçanita said. “Authenticity for wines is most of all a sense of place. You have no doubt when you put one of these wines to your nose what type of place it comes from.”

Chá Gorreana, the oldest and largest tea plantation in Europe, is on São Miguel Island, a 50-minute flight from Pico.

“My family put the tea in and we had faith it would grow,” said Madalena Mota, whose relatives founded Gorreana five generations ago in 1883 when blight wiped out their orange crop.

The first tea plantation was started around 1820 by Jacinto Leite, who brought camellia-sinensis seeds to the Azores from Brazil.

Only Gorreana and the neighboring Chá Porto Formoso plantations remain from a once-thriving industry that peaked in the 20th century. Ms. Mota attributes Gorreana’s longevity to the use of hydroelectricity, which runs the machines required for manufacturing. This practice hasn’t changed since 1920, when it was implemented by her great-grandfather.

To make black tea, the leaves are air-dried for 10 hours, then placed in a rolling machine to remove the sap; they are oxidized, dried again and then packaged. The process for green tea is similar except the leaves are steamed before going into the roller and are not oxidized before drying.

“The water comes from our stream. This energy keeps me alive now because we are in Europe, and energy is expensive. If we didn’t have my energy, we would close,” Ms. Mota said.

Gorreana produces 40 tons of green and black tea annually from the plant camellia-sinensis; it is sold in the Azores and exported to niche markets in Canada, the United States and Europe.

The company does not use chemicals, as there are no funguses that adversely affect the plants on the island. It is aromatic and smooth with a rich, full flavor.

Gorreana’s 86 acres are open daily. Visitors can walk the fields, take a tour, observe the tea-making process and sample tea, all at no charge.

“This is my passion,” Ms. Mota said. “But Gorreana is not mine. It’s from the Azores, from Portugal. To pass it on to the next generation is to keep it alive.”