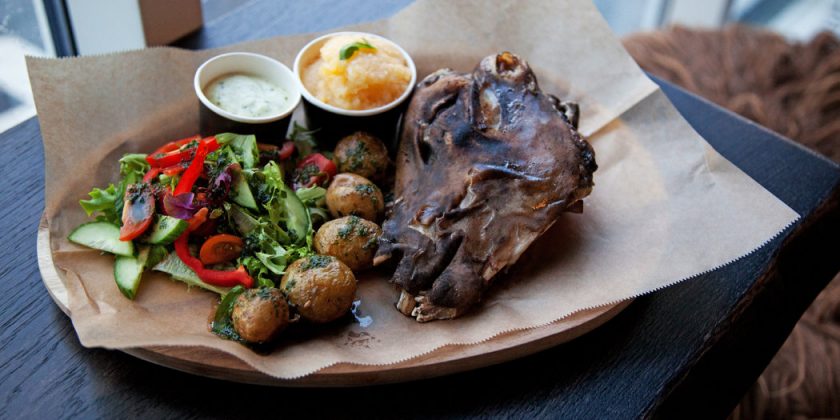 “You have to cut across the jawline and then pull it apart. The best meat is underneath,” said Herborg Svana Hjelm, one of the owners of Fjarhusid, a lamb-centric food stall inside Grandi Matholl, a food hall that opened in June in Reykjavik’s blossoming fish-packing district.

She was describing how to eat svid, a traditional Icelandic dish where a sheep’s head is cut in half, then boiled, brain removed, with heavily salted water. You can almost taste the grasses and moss that the sheep had been feeding on all summer in each bite of the tender meat that falls right off the bone. Fjarhusid, one of nine stalls in the hall, serves lamb burgers, lamb skewers and Icelandic meat soup, with lamb.

As the krona has strengthened against the dollar, eating out in Reykjavik has become a challenge. With weather limiting street food to the summer, these food stalls, which lack the overhead of brick and mortar spaces, have become an attractive alternative. Prices remain low, at least by Icelandic standards, yet the quality is surprisingly high. In 2017, Hlemmur Matholl opened in the former Hlemmur bus station; it has a branch of the bakery Braud og Co and a counter with Nordic small plates and cocktails with foraged herbs called Skal!

I popped into Grandi Matholl, set inside a refurbished fish factory, several times over a few days during my visit to Reykjavik, each time tasting something new. I missed out on the Korean street food at Kore and the lobster-and-bacon sandwiches at Rabbar Barinn, but was able to sample a rather wide variety of Icelandic ingredients for what would have been the price of a single dinner elsewhere. At LAX, a stall that specializes in seafood and sparkling wine, I had lovely smoked trout pâté with grilled bread and a glass of prosecco, which they had on tap. There was tempura-battered cod, a bit greasy and served with mayonnaise infused with black garlic and sea truffles, from a stall called Fusion Fish & Chips. At Micro Roast — Vínbar, from the owners of coffee roaster Te & Kaffi, there was local charcuterie and natural wine.

Each time, I carried my food over to the picnic tables in the main dining area, where floor-to ceiling-windows look out over the old harbor, watching the fishing boats in constant motion. Some of them were carrying the ingredients that would be served here later.

Grandi Matholl, Grandagardur 16, Reykjavik; grandimatholl.is. An average meal for two, minus drinks and tip, is 6000 Icelandic krona, or about $52 at current exchange rates.