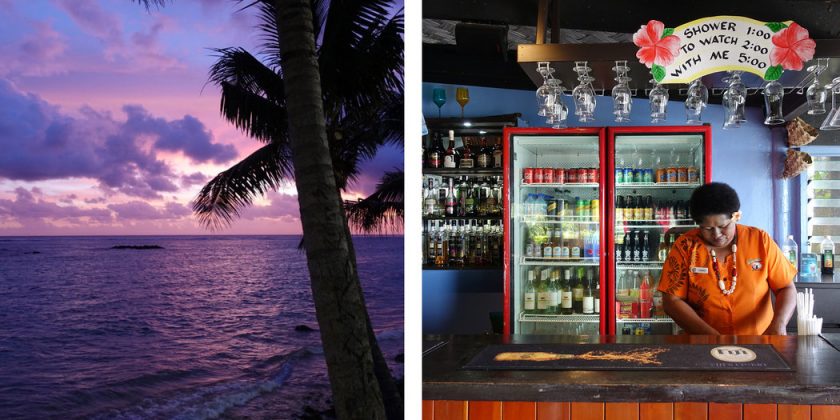 Our columnist, Jada Yuan, is visiting each destination on our 52 Places to Go in 2018 list. This dispatch brings her to Fiji, which took the No. 24 spot. It is the 45th stop on Jada’s itinerary.

I tried to remember my Fijian instructor’s directive: “The most important thing is to breathe.” Weighted down with an oxygen tank and a belt of stones around my waist, I sunk below the surface of the South Pacific on my first-ever attempt at scuba diving. My breathing was fine; my mind just couldn’t compute that this was possible. I surfaced and ripped out the mouthpiece. “I can’t do this,” I said.

I grew up in landlocked New Mexico and qualify as a “reluctant swimmer,” according to the YMCA where I took swimming lessons for the first time since childhood last year. Snorkeling comes easy to me — close to the surface, a constant source of air — but going deeper didn’t cross my mind until I got a message from a friend who’d spent his honeymoon on a dive boat in Fiji with his equally scuba-loving wife.

Fiji’s 333 islands and the warm ocean between them have some of the most colorful soft-coral reefs in the world, home to turtles, sharks and a gazillion twirling, neon fish. If my friends John and Heather had traveled across the world to see those underwater treasures, how could I miss out?

Being in an unfamiliar environment is the perfect time to try new things, and I can think of few places on this 52 Places trip that have been as different from where I’d been living (New York City) as Fiji. Back home, I loved my routines. But here on the road, I've felt a freedom to push myself, whether it's been paragliding in Lucerne, Switzerland, eating an ant taco in La Paz, Bolivia, or jumping off a cliff into a freezing river while "canyoning" in Megève, France.

Emboldened, I signed up for a tandem scuba dive with Captain Cook Cruises, which would let me try the experience without going through a certification process. (See also: Whitetip Divers.) Once my initial freak-outs dissipated, my instructor, Joe Lum-On, helped me descend a little at a time, flashing an O.K. sign with his fingers and asking me to nod and flash one back at each stage. My ears hurt from the pressure as we linked arms, like we were doing a square dance, and moved forward. I had to stop myself from gasping as we came upon schools of tiny blue devil damselfish, or my favorites, parrotfish, in such a riot of neon they could have been crafted in Las Vegas. Joe picked up a sea cucumber and a blue starfish and let me pet them. We didn’t dare touch the sea urchins poking their spines out of coral nooks and giant clams that I’d heard could cut a person’s limbs off.

When Joe pulled out a loaf of bread and the fish began to swarm around us, I was so fascinated I didn’t notice that I’d stopped reminding myself to breathe.

So much of Fiji felt thrillingly, spectacularly unfamiliar. Unlike many tourist destinations on this 52 Places trip, the real Fiji never seemed far away.

Each day, I’d set out for a drive on the left side of the road, with horses and cows and dogs crossing at will. At Fiji Marriott Resort Momi Bay, I befriended a hotel worker, Inia Nailiko, who’d proven particularly helpful when my rental car broke down. As a thank you, I took him and his wife, Sera, for a ride down the coast. They told me about their courtship process, which involved meeting in church and dating chastely for a year before Inia declared his intentions, in traditional Fijian fashion, by presenting a whale’s tooth and several drums of kerosene to Sera’s family.

They’d spent the morning before our drive hitchhiking to the market and back with their two children since, as Inia explained, it would take a Fijian at least 10 years of working hard to earn enough money to buy a car. Most people seemed to get around by bus, horse, hitchhiking or on foot.

On a wonderful jet boat safari along Fiji’s longest river, the Sigatoka, I visited a village of around 70 inhabitants, where we ate a home-cooked meal, sang and danced, and drank kava, a ceremonial drink made from a dried root that makes your tongue numb. And I sated my newfound addiction for all things under the sea with half a day on a private boat with a local islander, Nox. For 400 Fijian dollars ($186, a steal), he took me to a sandbar in the middle of the ocean next to a reef so full of shapes in bright greens and purples it could have been drawn by Disney cartoonists. I jumped in without hesitation.

“Are you ready to catch some waves?” asked the Fiji Surf Co. instructor Koto Vakamoce when he picked me up in the company van, surfboards stacked on top.

I was not ready, I said, half-joking, but I had already paid for an introductory lesson and we were on our way, so it seemed like this was happening.

Koto is from the small island of Fulaga, so far south it’s practically Tonga. There’s no tourism there, only fishing; he’d grown up in the water, but hadn’t seen a surfboard until he made it to the big island eight years ago. That’s also when he met his wife, Mary, who was in the van with us and took a nap while we surfed.

An hour south of the city of Nadi, Koto turned onto a hilly dirt road, which led to beautiful Natadola Beach, where loose horses moseyed around. Our surfing spot would be in front of the Intercontinental Hotel, where the waves broke far from shore at high tide — gentle enough for a newbie like me.

Koto wasn’t much of a talker, which helped make for simple instructions. On shore, he ran through his four basic commands. “On your board,” “ready,” “paddle” and “stand up!” I would start out on a super-buoyant, 10-foot board and, if all went well, would graduate to a nine-footer. And without much ado, we were in the water, Koto leading me through small waves that appeared utterly massive. I was freaking out, until I realized that the water was shallow enough for my feet to touch the bottom.

For the first few waves, all I remember was staring straight ahead as I lay face down on the board. Koto held me still until the right wave came along, and suddenly he said, “ready!” and “stand up!” And then I was flying toward the shore, knees bent, arms out, feet firmly planted like a champ. (Or at least I thought I was killing it, until a nice, real surfer who had been in the water with us joked, “I could use a push like the ones you’re getting.”)

Wave after tiny wave went fantastically, and then one didn’t, and I fell off my giant board and was “eating water,” as I came to call it. Koto taught me to hold my breath from the second I knew I was falling until the time I surfaced.

By the end of three hours with Koto, I had stood up more times than I could count. I loved the feeling of flying across the water, past kayakers and boogie boarders. I loved it when Koto high-fived me after a particularly good ride and told me, “That was your best wave. I didn’t push you. You paddled it all by yourself.”

Sun protection If you are prone to getting sunburned, go snorkeling and surfing in a long-sleeved shirt and leggings. No matter how strong your SPF, sustained sun-exposure can do you in. Let my painful, bright-red upper back and thighs be a lesson.

Money matters Credit cards are accepted all over the mainland, but every transaction, in my experience, was subject to a 3 to 5 percent surcharge. That includes your seven-day bill at a fancy resort. Carry wads of Fijian dollars to avoid it.

Eat The Indian food here is as authentic as it gets, made by the descendants of Indian nationals who were brought over as indentured servants. The real surprise — and what I ate every single day — is fish in coconut. Try kokoda, a ceviche made with coconut milk and lime. I’ve been craving the coconut fish curry at the beachside, Fijian-owned He-Ni-Uwa restaurant on the Coral Coast ever since I tried it.

Stay Fiji lodging seems to fall into four categories: isolated outer-island retreats, family- and honeymooner-friendly resorts, beach bungalows and backpacker lodges. I started off at the new Fiji Marriott Resort Momi Bay, but felt most at home down on the Coral Coast at funkier beachside lodges like Tambua Sands, Fiji Hideaway and Yatule Beach, or the gorgeous backpacker complex Beach House, where each private hut has an outdoor bathroom. Wi-Fi was inconsistent or nonexistent everywhere, which makes sense for one of the most remote parts of the world. Consider it an opportunity to truly unplug.

22 and 23: Bristol, England, and Glasgow, Scotland

24 and 25: Tallinn, Estonia, and Vilnius, Lithuania

37 and 38: Emilia-Romagna and Basilicata

Jada Yuan is the 52 Places Traveler. She spent over a decade at New York Magazine and its websites as a contributing editor and culture features writer. Her cover stories and features have appeared in Cosmopolitan, Vogue, Elle, Glamour and Bloomberg Businessweek. @jadabird