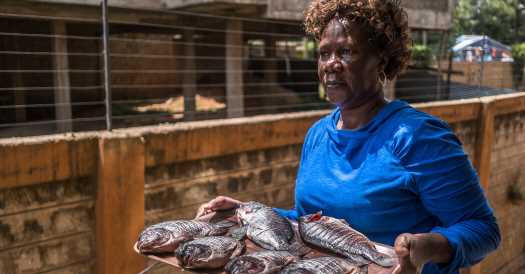 As she fried fish to pay for her bills and rent, Caroline Onyango was struck by optimistic news reports broadcast in her home city of Nairobi this spring that noted the swift rollout of coronavirus vaccinations in the U.S. and other western countries. For the first time in a devastating year, Ms. Onyango grew hopeful that foreign tourists would return to East Africa, allowing her to go back to work as a senior tour guide for a safari company.

But in early June, as international borders started to reopen and bookings surged, Kenya and many other countries in Africa experienced their steepest spike of coronavirus cases during the pandemic. With only 1 percent of the African continent fully vaccinated and the virus raging, several countries were forced to lock down or impose stringent measures against the virus. The drastic precautions to stop the spread crushed hopes for a revival in foreign tourism.

“I have not had any work since March 2020, nothing at all. Everything dried up when the borders closed,” said Ms. Onyango, 40, who has worked in tourism for over 15 years and specializes in overland adventure excursions, which include wildlife viewing and camping in remote villages. “Domestically, safaris are picking up in Kenya little by little, but it’s very competitive and us overlanders will not have work until cross-country travel restarts.”

Before the pandemic, Kenya was the third largest tourism destination in Africa, with tourism contributing $1.6 billion to the national economy and creating 1.1 million jobs, or more than 8 percent of the country’s employment. The coronavirus was disastrous: During the high season between July and October of last year, most bookings were canceled, causing layoffs and salary cuts, and many tour companies shut down. The loss of international tourism in Kenya and other East African nations, with little assistance from local governments or elsewhere, has decimated the livelihoods of thousands of travel and hospitality workers, who have had to take on odd jobs and borrow money to survive.

Ms. Onyango, a single mother of two, had been making the equivalent of around $1,000 each month, which she said was enough to provide for her family. Now, she earns between $100 and $150 a month by cooking and packaging tilapia fish and sardines for neighbors, friends and clients she found through Facebook.

“It is a real struggle, because people do not have money to spend so even if I work hard, I am not able to sell too much,” she said. “I make enough to sustain my family with basics, but not enough to pay all my bills and rent. We used to take milk with our tea, now we drink it black.”

Kenya eased its lockdown restrictions in July, but the worldwide surge of the highly contagious Delta variant, as well as the low vaccination rates in the region, have kept most tourists at bay. Still, tourism workers are grateful for the small number of visitors that have been trickling in for safaris and coastal vacations in recent months.

“We knew we would not get the vaccines as quickly as America and Europe,” said George Gituku, the owner of Sandrage Safaris in Kenya, “so under the circumstances we are thankful that we have some business.”

In 2019, Kenya received more than two million international visitors, a record number and a nearly 4 percent increase from the year before. In 2020, overseas arrivals plummeted by 71.5 percent to 579,600, according to the National Bureau of Statistics. Between January and June this year, the country welcomed just over 300,000 travelers, the state-run Tourism Research Institute reported.

Since June, Sandrage Safaris in Nairobi has received about 30 guests a month, a significant drop from the 100 guests they were averaging in the 2019 high season. Most of the visitors were Americans who were feeling optimistic after getting vaccinated, Mr. Gituku said, but Kenya’s low vaccination rate — currently just over 3 percent of the population — has caused many of his clients to postpone.

“We are learning to live with this virus, and we are constantly adapting our protocols to ensure our guests have a comfortable and safe experience,” Mr. Gituku said. “So far, everyone has had a great time, the migration has been amazing this year, there have been so many animals to see, and thankfully no one tested positive for Covid when they got back.”

Kathy Freedman, a retired architect from Boston, said she felt safer on her recent 10-day safari with her husband in the Masai Mara than she did on a hiking vacation an hour away from her house, where she stayed in a hotel full of guests who, she said, were not wearing masks or social distancing.

“Our kids were so worried about us traveling so far to Kenya, but Covid is worse at home than most places,” Ms. Freedman said. “We chose the best time to do a safari when there were no crowds. It was just us and our guide out in the wild with the animals.”

Safari workers are hoping that when their clients go back and share their positive experiences with friends and family, it will encourage more people to book trips. Many companies are paying their employees daily rates based on bookings they receive, which, workers say, is not enough for them to pay their bills and the debt they accumulated last year.

“Whatever comes in now, you have to decide whether to put it toward your debts or use it to survive on,” said Michael Segera, a 53-year-old tour operator who specializes in logistics for tours in the coastal city of Mombasa.

Last year, when Mr. Segera’s clients canceled their tours, he moved to Nairobi to live with his three adult children. For months they lived off one meal a day, and Mr. Segera worked odd jobs so that he could pay for basic expenses and the Wi-Fi connection, which his daughter needed for her online university classes.

“It is very hard to be a parent when you don’t know what will come tomorrow,” Mr. Segera said, taking a deep sigh. “You feel very anxious all the time, and even though things are a bit better now, I still have so much worry.”

In recent weeks, Mr. Segera checked in with a few of his colleagues to see how they were coping and found that several of them had changed careers and are now selling food products. Others have moved from cities to their local villages where the cost of living is cheaper, and they don’t have to pay rent.

Landlords had been understanding at the beginning of the pandemic, but now they are evicting tenants when they fall behind on rent, Mr. Segera said. “There is real desperation, and we are hoping beyond hopes that things will get better.”

Over the past two years, the Kenyan government has paid about $20 million to workers in wildlife conservancies to keep them operational and protect animals from poaching, but safari workers have not received any individual support. Several safari companies have managed to retain employees on reduced salaries, but many operators have had to let their workers go.

We asked readers to tell us about the spots that have delighted, inspired and comforted them in a dark year. Here, 52 of the more than 2,000 suggestions we received, to remind us that the world still awaits.

Uganda, another popular safari destination in East Africa, is also experiencing a slow tourism season, even after partially lifting lockdown measures in late July. Foreign visitors dropped by nearly 70 percent in 2020, to 473,085 from 1,547,000 in 2019, according to the country’s ministry of tourism. Similar to the experience in Kenya, most safari workers in Uganda find themselves deep in debt and without work.

Augustine Kikomeko, 46, a safari guide based in Kampala, said that, to support their families, most tour guides have had to sell property, land or their vehicles. Many are having to work several jobs, he said.

“The airport had opened, but there are barely any arrivals,” said Mr. Kikomeko, a father of three who used to make about $800 per month as a safari guide. He now makes between $100 and $200 a month, washing cars and selling fresh juice.

He said many people in his industry have been forced to reinvent themselves to get by.

“I had one safari in May and I have another one in December, but in between there is nothing,” he said. “I need to teach myself new trades and learn new skills because even though we are trying to be optimistic and hopeful about the future, it does not look good for our sector, and we need to find ways to survive.”