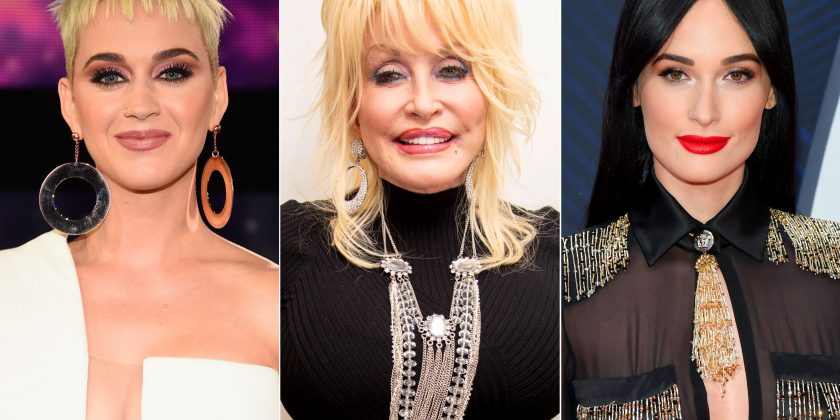 Dolly Parton will get a star-studded tribute on Sunday’s Grammy Awards!

The country superstar and eight-time Grammy winner, 73, will be honored by Katy Perry, Kacey Musgraves, Maren Morris and Little Big Town on the show, the Recording Academy announced on Tuesday. All will sing covers from her catalog of hits.

News of the send-up comes after MusiCares, the Recording Academy’s charity, announced Parton as the recipient of its annual person of the year prize. She’s receiving the trophy for her considerable creative accomplishments and her longtime support of a number of causes through her Dollywood Foundation.

Parton will also take the stage herself on the Grammys to perform new music the motion picture soundtrack to Netflix’s Dumplin’, which tells the story of a small town girl who turns to Parton’s music for inspiration. It’ll be the first time Parton has performed on the Grammy stage since 2001.

In addition to the Parton news, the Recording Academy announced that Sunday’s show — which airs live from the Staples Center — will open with a performance by Grammy nominees Camila Cabello, J Balvin, Young Thug, and Grammy winners Ricky Martin and Arturo Sandoval.

They join previously announced performers Cardi B, Brandi Carlile, H.E.R., Post Malone, Janelle Monáe, and Kacey Musgraves — all of whom are nominated for Album of the Year. Past Grammy winners Diana Ross, Red Hot Chili Peppers and Miley Cyrus, are also set to perform, among others.

The nominees for the 2019 Grammys were announced back in December. While Kendrick Lamar had the most (a total of eight nominations), this year’s crop of nominees features a strong female showing, with five of the eight 2019 album of the year nominees for 2019 by women.

Be sure to check out PEOPLE’s full Grammys coverage to get the latest news on music’s biggest night.

It was also a big year for music in film as the soundtrack for Black Panther scored an album of the year nomination and Lady Gaga and Bradley Cooper’s “Shallow” from A Star Is Born received four nominations, including record and song of the year. (Gaga scored five nominations herself.)

Notably, there are two artists who have been nominated posthumously this year — late rapper Mac Miller and rocker Chris Cornell.

This year’s show will be hosted by 15-time Grammy winner Alicia Keys.

“I’m soooo EXCITED,” Keys, 37, said in her announcement on YouTube Tuesday. “There’s so much in store and I CAN’T WAIT for y’all to see it ALL come to life.”

“I know what it feels like to be on that stage and I know what it feels like to be proud of the work that you’ve put in, and to be recognized for it. And I just feel grateful that I’m able to bring that light and that energy,” she said in a video. “This is a first. It’s a first. It’s amazing. And I think it’s perfect timing. Honestly, I’m really excited. I feel really good about it, because I feel like it’s the perfect opportunity to give the light back [and] to lift people up, especially all the young women who are nominated. To me, it feels like sister vibes.”

Meanwhile, to commemorate Parton’s person of the year prize, Apple Music teamed up with the country icon to curate a “What Would Dolly Do?” playlist on the streaming platform.

Inspired by Parton’s lasting impact on country music, the collection of songs celebrates music by women (and some supportive male artists) who have followed in the Nashville queen’s footsteps and embody her creativity and empowerment.

“What Would Dolly Do?” includes cuts from a slew of Music City mainstays (Shania Twain, The Dixie Chicks, Carrie Underwood, Reba McEntire) and acclaimed newcomers (Musgraves, Morris, Kelsea Ballerini), as well as some of Parton’s genre-crossing collaborators like Sia, Elle King and Macy Gray. And even her goddaughter, Cyrus, made the cut!