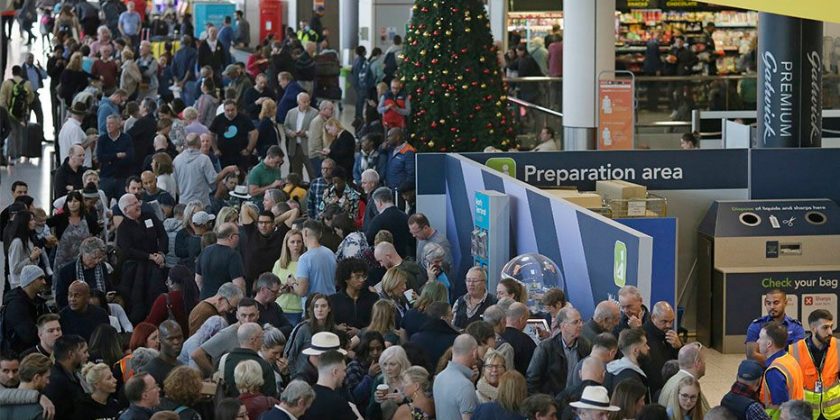 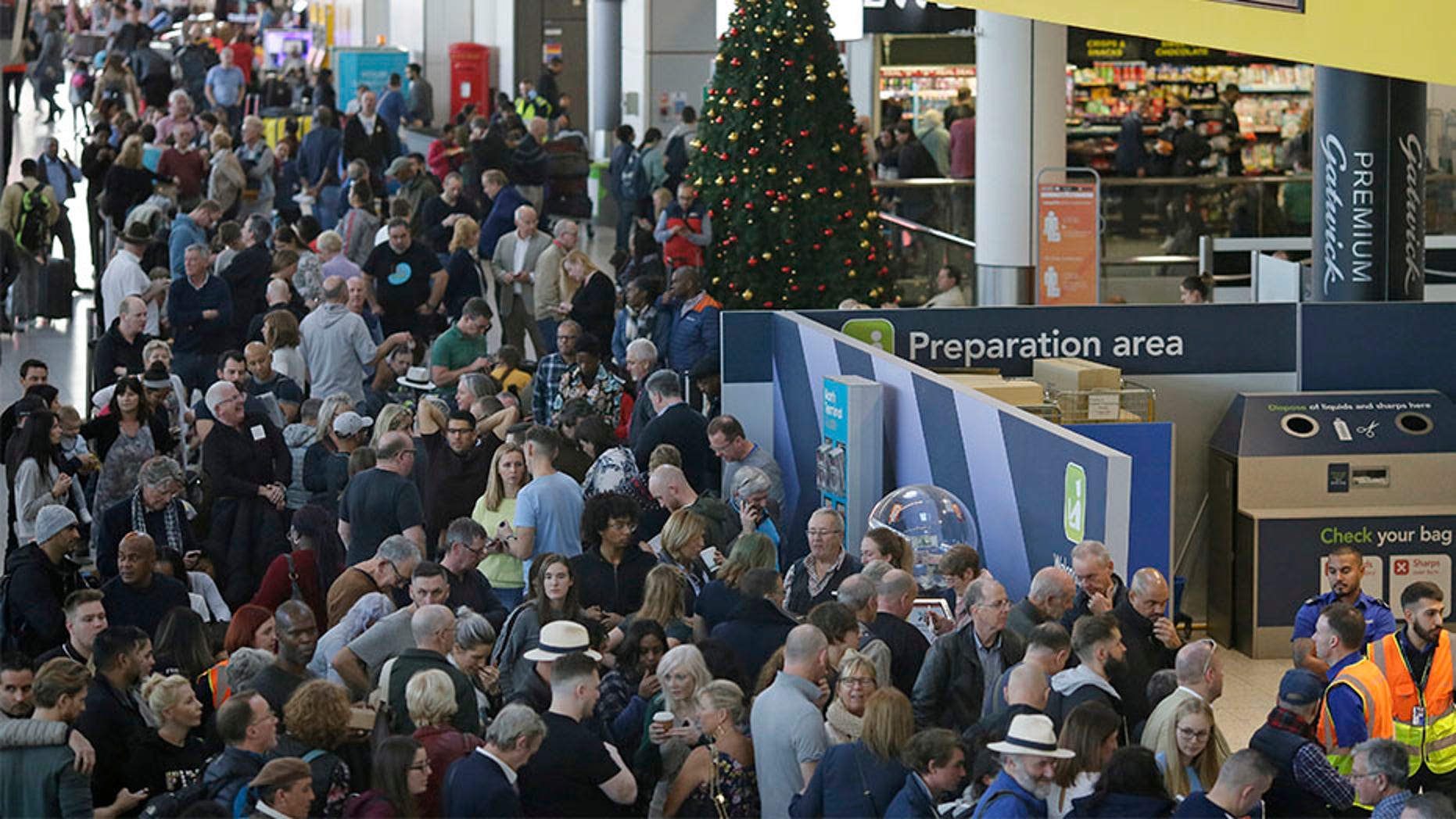 People wait near the departures gate at Gatwick airport, near London, as the airport remains closed with incoming flights delayed or diverted to other airports, after drones were spotted over the airfield last night and this morning.

A pair of drones swirling in the skies around London's Gatwick Airport have wreaked havoc on the travel plans of tens of thousands of passengers who have been delayed, diverted or stuck in the middle of the holiday getaway.

As of midday Thursday at the country’s second-busiest airport, the runways remain shut down. Those affected by the disruption flooded social media with images and videos of restless passengers lining the hallways of its terminals.

The drones were first spotted Wednesday night and more than 100,000 passengers had been scheduled to pass through Gatwick Thursday on 760 arriving and departing flights, an official said.

“We believe this to be a deliberate act to disrupt the airport,” Gatwick Police Superintendent Justin Burtenshaw told Sky News. “However, there are absolutely no indications to suggest this is terror-related.”

Chris Woodroofe, Gatwick's chief operating officer, said that roughly 10,000 people had been affected by the shutdown by Thursday morning — 2,000 whose planes were unable to take off from Gatwick, 2,000 stuck at their points of origin and 6,000 diverted to other airports in Britain, as well as Paris and Amsterdam.

Woodroofe said at least one drone remained in the area Thursday morning.

"As I stand here, there is a drone on my airfield as we speak," Woodroofe told Sky News, adding that “the police have 20 units out looking for the operator of that drone, and once they find them, they will bring them to justice, which is five years imprisonment for endangering an aircraft."

One image from the flight-tracking website Flight Radar 24 showed fire trucks and other vehicles combing the runways of the airport looking for the drone. Another video posted on Twitter showed a helicopter flying above Gatwick, inspecting the areas below.

But some on social media are blasting police and airport officials for their handling of the ongoing incident, asking how the devices have managed to disrupt such a large airport for this long.

“I’d be fuming if my flight was suspended by something so petty. Especially at this time of year,” one user posted on Twitter.

“Pathetic. Shoot it down for heaven’s sake,” said another.

Woodroofe says to do that though is not an option, as "the police advice is that it would be dangerous to seek to shoot the drone down because of what may happen to the stray bullets.”

The airport says in the meantime that anyone thinking about heading to Gatwick should reconsider — and that there will be no flights in or out before 4 p.m. local time at the earliest.

“Please do not travel to Gatwick without checking the status of your flight with your airline, as there are significant cancellations and delays today,” a message in a red box at the top of the airport’s website read. “We apologize to all of our passengers who are impacted today, but the safety of our passengers and all staff is our priority.”

Those passengers though have been complaining that their Gatwick-bound flights had landed at London Heathrow, Manchester, Birmingham and other cities.

Luke McComiskie, who landed in Manchester — more than 160 miles from London — said the situation "was just chaos, and they had only two buses and taxis charging people $760 to get to Gatwick."

Andri Kyprianou, from Cyprus, described "freezing" conditions for passengers who spent the night at Gatwick's South Terminal. Her flight to Kiev had been canceled.

"I haven't slept since yesterday morning. We are very tired. It's freezing, we are cold, having to wear all of these coats for extra blankets," she told the Associated Press.

Gatwick, about 30 miles south of London, sees more than 43 million passengers a year to short- and long-haul destinations and serves as a major hub for the budget carrier easyJet.

The ongoing drone incident Thursday is not the first time something like it has happened at Gatwick. The airport briefly closed its runway last year when a drone was spotted in the area. An errant drone also briefly led to the shutdown of Dubai International Airport in October 2016.

Pilots have reported numerous near-misses with drones in recent years in Britain, and aviation authorities have warned there is a growing risk that a midair collision could cause a major disaster.