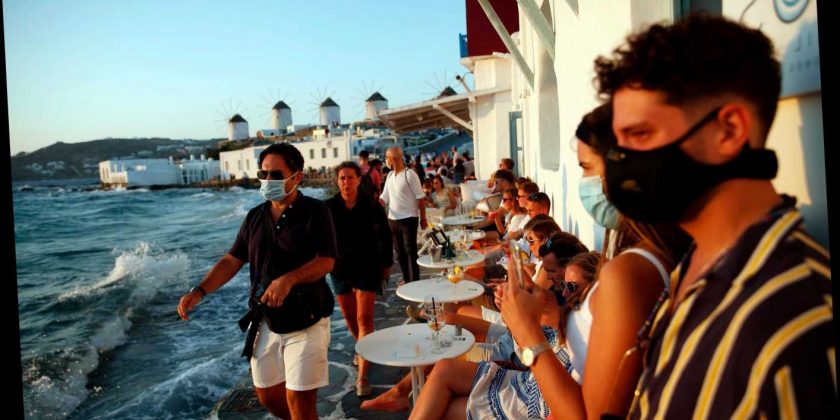 BAR owners in Greece have been fined as much as €10,000 after breaching new curfew guidelines.

The country has been forced to introduce new restrictions as coronavirus cases rise, with fears it could be next to be on the UK quarantine list.

The infection rate has climbed since the end of July, with 7,075 cases since the pandemic began.

The number of cases per 100,000 people over the last two weeks stands at 21.2 – with any countries over 20 being placed on the UK watchlist, and facing potential travel restrictions if it doesn't go down again.

Now, bars and nightclubs must close between midnight and 7am, affecting the islands of Mykonos, Santorini, Corfu, Rhodes, Zante and Crete.

Six store owners across Corfu, Zante and the Paxi islands were fined due to opening past the curfew, ranging from €3,000 to €10,000.

Some have been banned from opening for three days as well.

Bar owner Stavros Grimpla slammed the Greek government's decision, claiming they were welcoming tourists yet stopping them from experiencing the nightlife.

He said: "You can’t take a unilateral decision and shut down the island the following day, at midnight.

“Everyone has come (to Mykonos) to eat their food, to entertain themselves, swim in the sea.

"At this moment, we are fooling them. We told them ‘come to Greece’ and Greece has shut down."

Some businesses are opening earlier instead, although bars and nightclub are likely to be affected the hardest.

Brits are currently able to travel to Greece on holiday, although facing risks it could soon be added to the UK quarantine list.

Families heading to the country must also fill in a Passenger Locator Form 24 hours before travelling to receive a QR code to be shown on arrival.

However, tourists have complained of not receiving the code or for the forms being too confusing, with some airlines requiring one per person.

A British family on holiday in Greece have been forced to quarantine for two weeks after one of them tested positive for coronavirus on arrival.