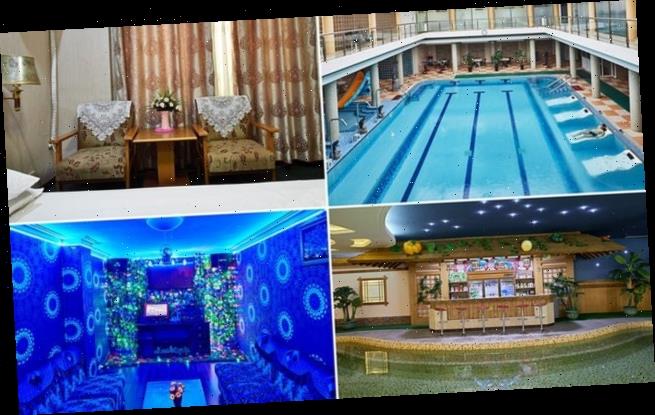 These are standard features in posh Western hotels – and, it turns out, in North Korean hotels, too, as a fascinating new book reveals.

Hotels of Pyongyang, by author James Scullin and photographer Nicole Reed, takes readers inside the frozen-in-time, yet surprisingly glamorous, hotels of the hermit country’s capital city. 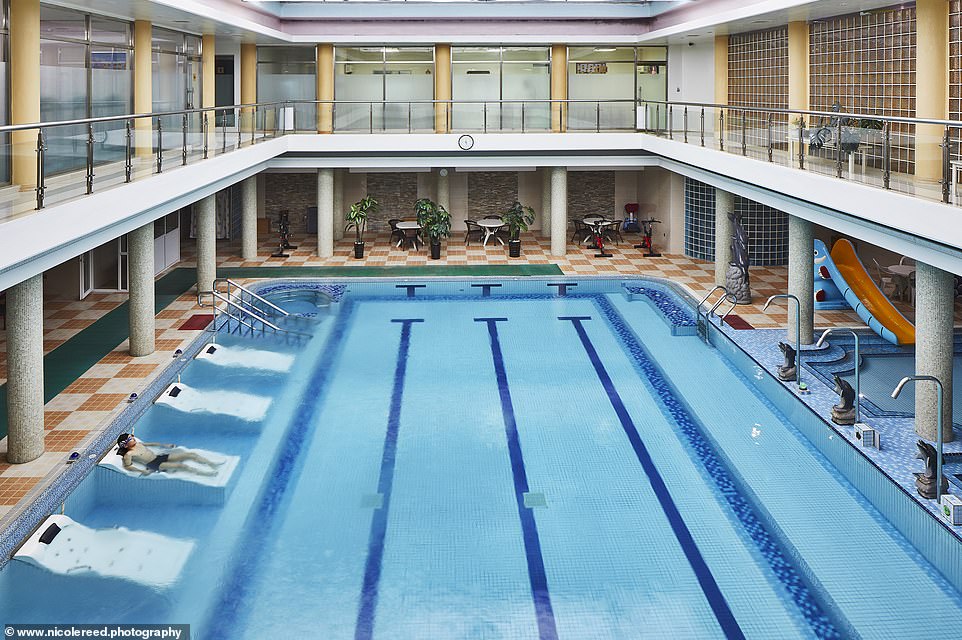 The huge swimming pool at Changwangsan Hotel, which opened in 1975, was renovated in 2006 and offers 420 rooms over 18 floors 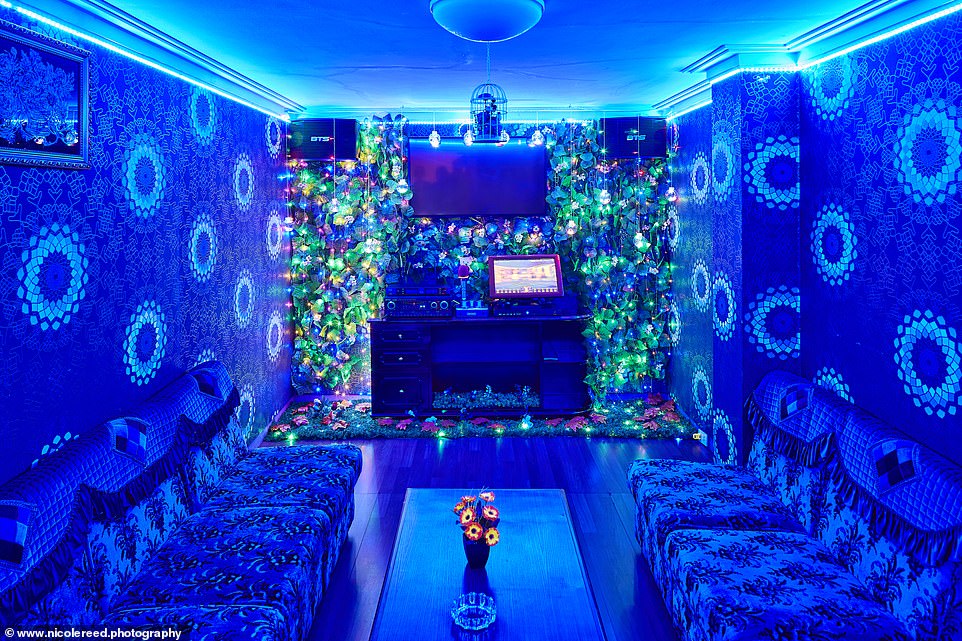 The Sosan Hotel (pictured), James says, ‘is famous for its individualised and colourful karaoke rooms that reputedly have the best song lists in Pyongyang’

Extraordinary photos in the tome show how its hotels have a vast array of amenities – though Wi-Fi and room service are non-existent.

It’s also clear that they provide a rare creative outlet in a bleak authoritarian regime for managers and interior designers, because some of the décors are dazzling, psychedelic even.

The hotels’ décors, James revealed, left one with ‘the feeling of being on a Wes Anderson set’.

For instance, he explained that they met a waitress whose pink blazer matched the entire dining hall’s table cloth and aesthetic.

‘A lot of design and colour is very considered in North Korea like that,’ he said. 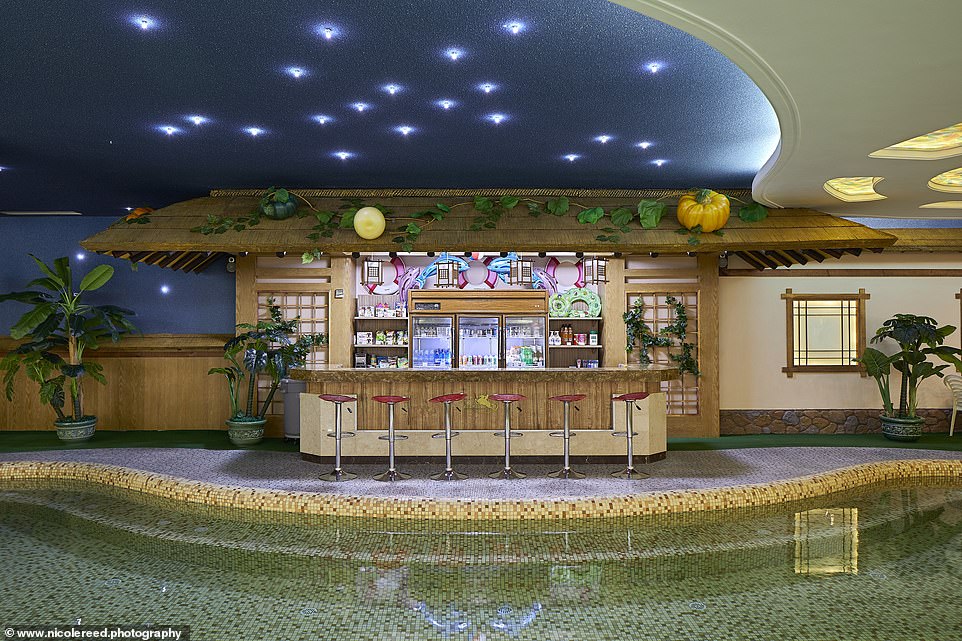 The Koryo Hotel pool bar. James said that this hotel is considered to be Pyongyang’s most deluxe 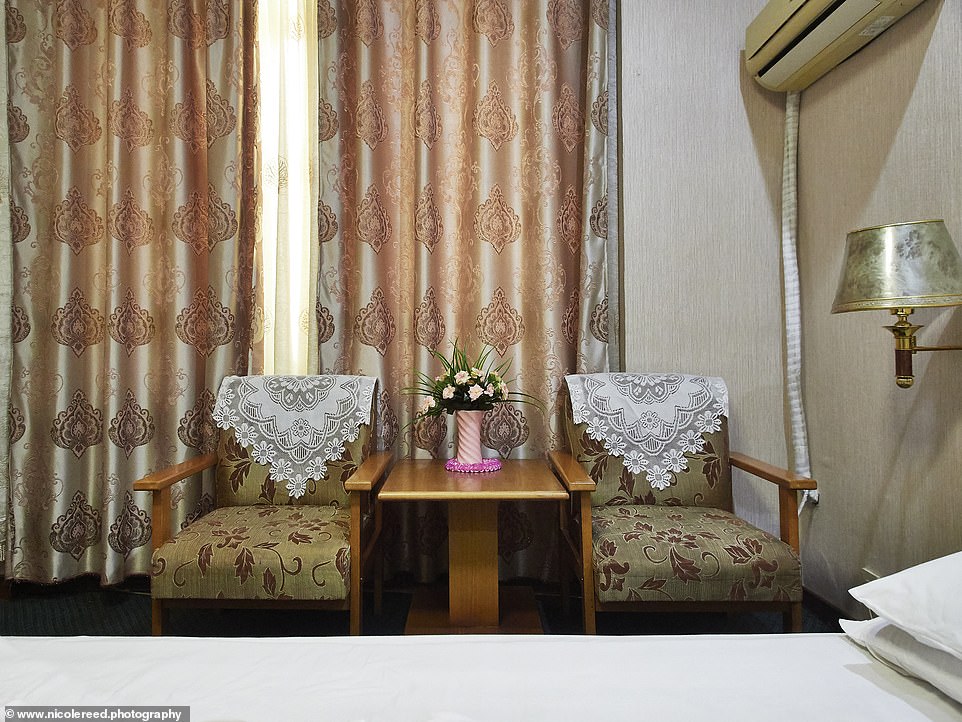 James, who’s from Melbourne, visited 11 hotels and said that one of his favourite rooms was the karaoke room in the Koryo Hotel.

He told MailOnline Travel: ‘It’s very kitsch and psychedelic. It has three different types of floor tiling and each wall has different wallpaper. It has beads that hang from the ceiling, which give off a 70s vibe, while the futuristic swivel chairs at the bar look like something out of the Jetsons.

‘It’s interesting to imagine that someone designed this room unaccredited without ever having travelled overseas or having been exposed to other countries that aren’t North Korea.’

James was also a fan of the hotel’s revolving restaurant on the top floor, where meals are eaten to a backdrop of North Korean revolutionary songs playing on a loop – a feature of all the hotels they visited.

He added: ‘The Koryo Hotel is considered the most deluxe of the hotels and with a revolving restaurant, it’s a nice place to have a drink and check out the Pyongyang skyline.’

He explained that the hotels ‘are all immaculately maintained and fully staffed at all times’.

And the staff, he said, always provide excellent service. 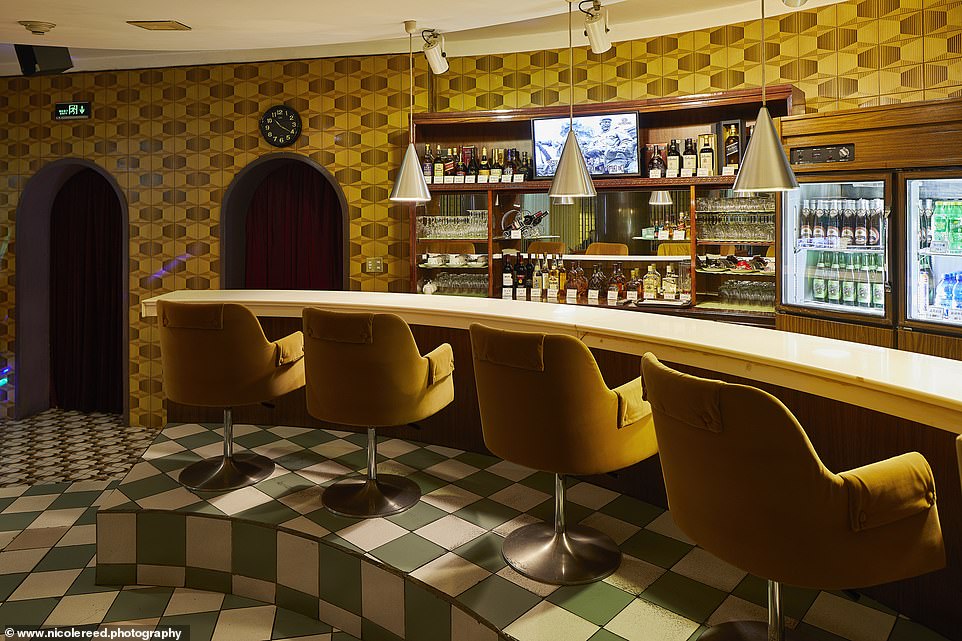 This image shows one of Jame’s favourite Pyongyang hotel rooms – the karaoke room at the Koryo Hotel. He said: ‘It’s very kitsch and psychedelic. It has three different types of floor tiling and each wall has different wallpaper. It has beads that hang from the ceiling, which give off a 70s vibe, while the futuristic swivel chairs at the bar look like something out of the Jetsons’ 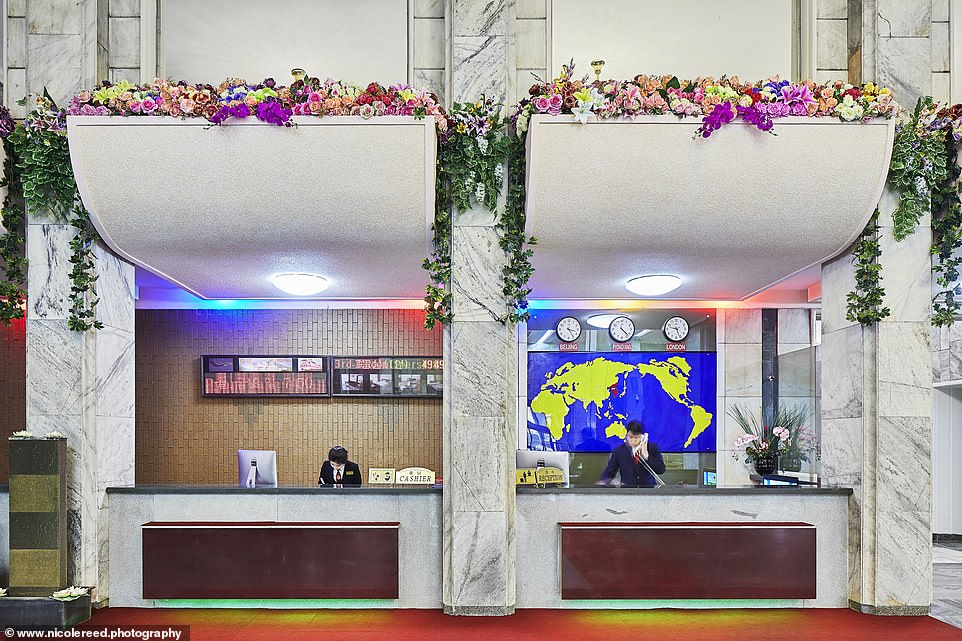 The swish lobby at the Ryanggang Hotel. James visited 11 hotels in total to research his fascinating tome

He said: ‘All the staff take their jobs very seriously and with pride and want to ensure you get the most out of your stay. Some of the hotels required us to stay at them in order to photograph them for our book.

‘This was great as we got to stay in more of them and experience them. Some come with traditional Korean floor heating called ondol, which makes them cosy.’

However, he didn’t get to experience the exclusive rooms – as those are for VIPs and diplomats and are apparently ‘very expensive’. 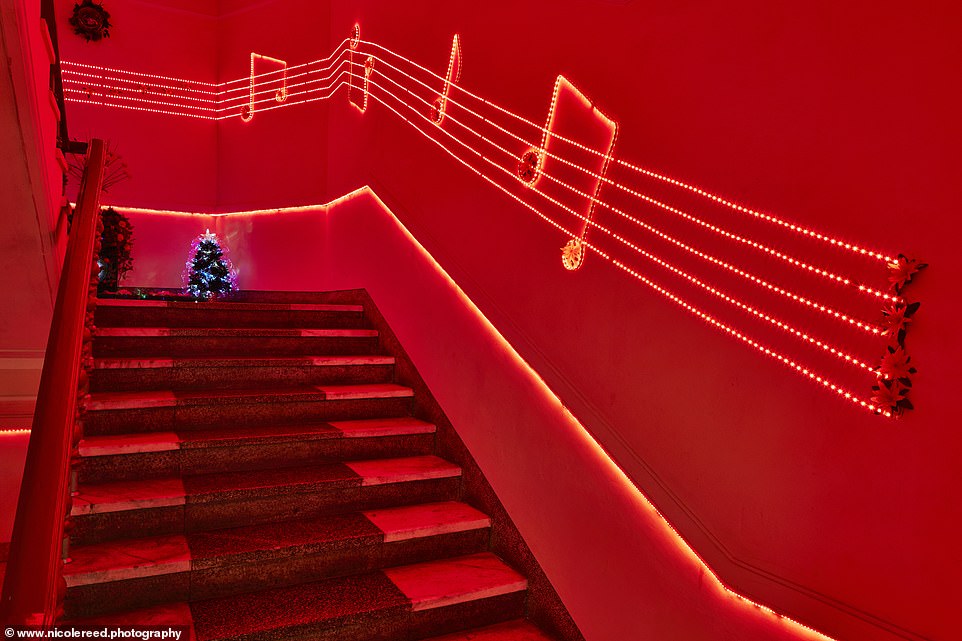 The Sosan Hotel karaoke suite features a striking music-themed staircase. The hotel opened in 1989 and was built to house visiting athletes as part of the 13th World Festival of Youth and Students, the book explains 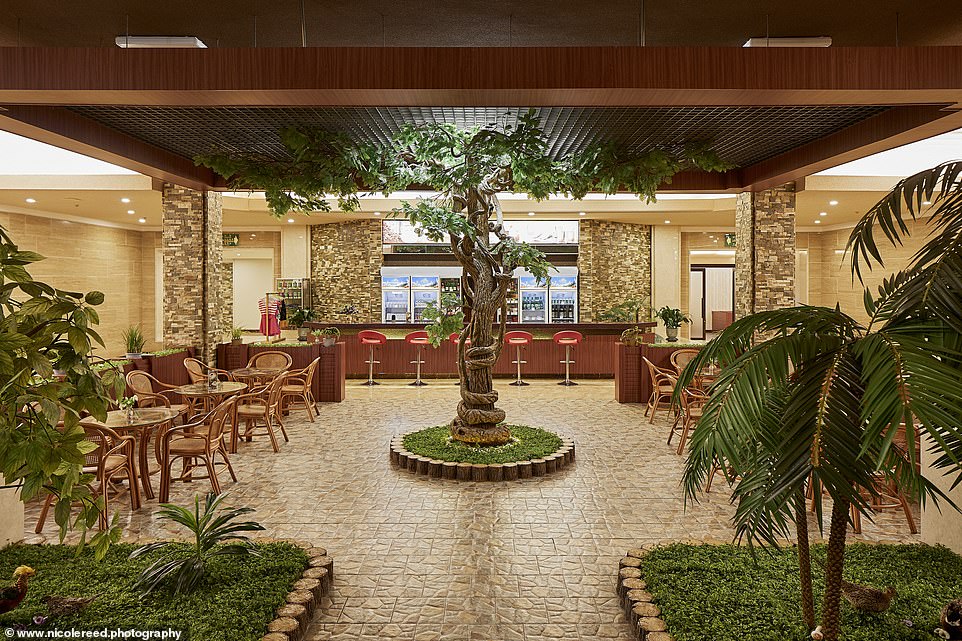 The leisure centre at the Koryo Hotel which, explains the book, ‘has long been the first choice for foreign diplomats and business delegations’ 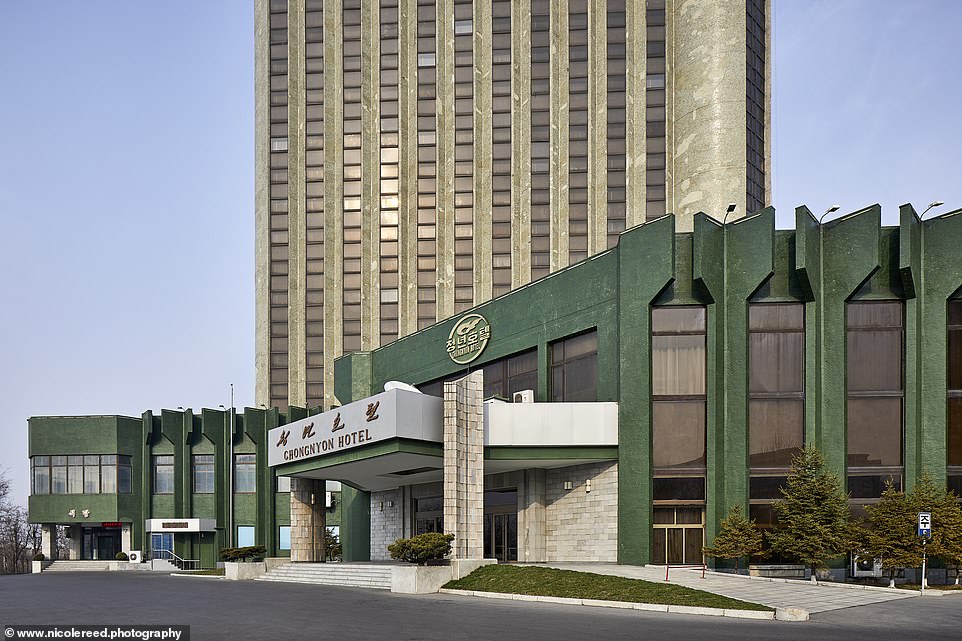 The Chongnyon features an expansive marble lobby that is home to a late-night burger stand and the offices of Air China on the first floor, the book says 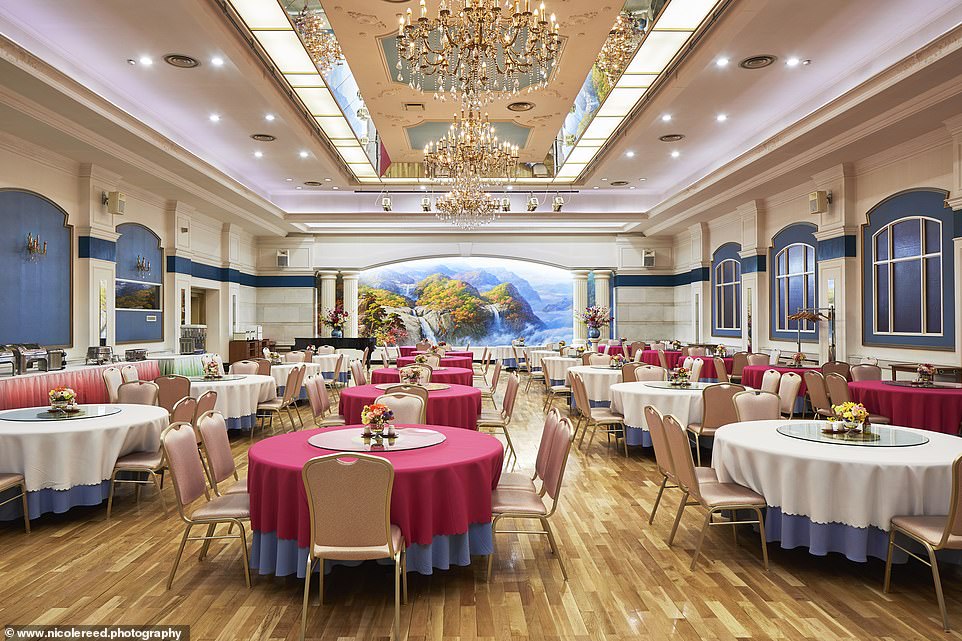 Pothongang Hotel, pictured, opened in 1972, was renovated in 1998 and has 160 rooms over nine floors. The book says that it’s a favourite of Japanese visitors and that the lobby and teashop offer a Wi-Fi connection for 10RMB(£1.15)/10 minutes – ‘a rare service in the DPRK’ 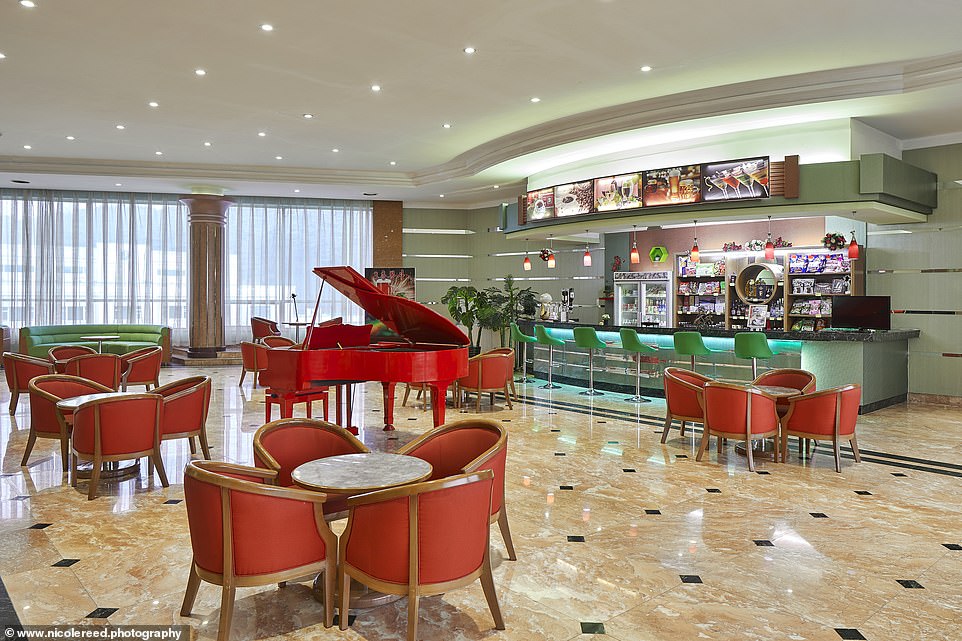 The Sosan Hotel piano bar. The book says that this hotel has ‘a large beer garden complete with neon lights, outdoor BBQ facilities and the DPRK equivalent of a pop-up bar’

He found North Korean people to be very modest and throughout the project each staff portrait required a lot of convincing.

The waitress in the pink blazer, for example, only agreed to pose after some determined convincing from James’s North Korean guides.

He said: ‘Most people did enjoy having their photos taken, but there’s just a lot of modesty to overcome. Thankfully, our guides worked hard for us and ensured we got all the shots we wanted.’

Scullin explained that the hotels were actually quite full, mainly with Chinese tourists, but that his photos were taken when the tourists were out on guided tours.

He said: ‘This made our job easier although it does perpetuate the trope that all the hotels are empty, which certainly wasn’t the case pre-Covid.’ 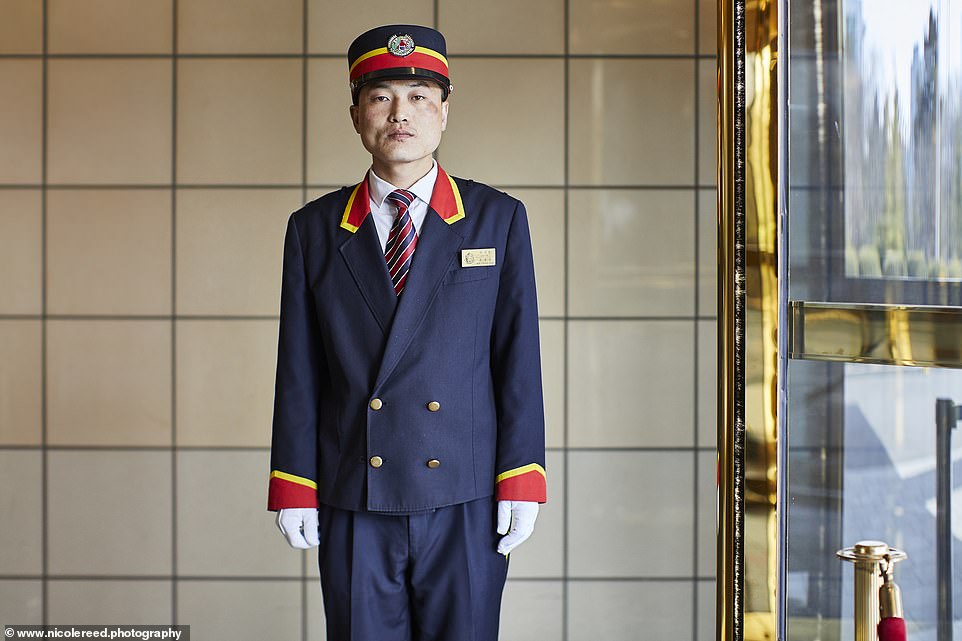 A doorman at the Pothongang Hotel. James said ‘all the staff take their jobs very seriously and with pride and want to ensure you get the most out of your stay’ 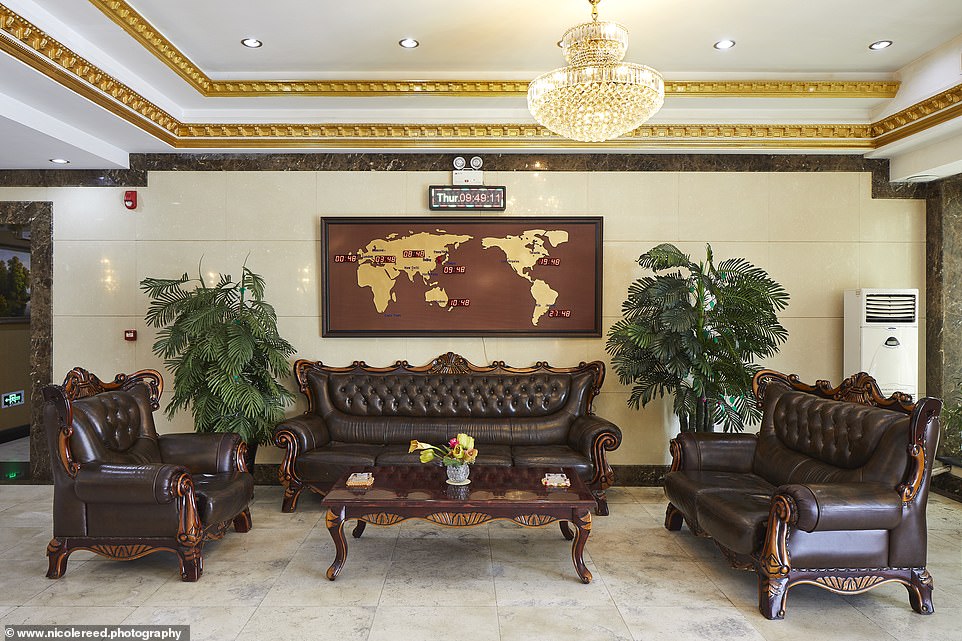 Scullin was living and working in Beijing when he first ventured into North Korea as a tourist in 2012.

All tourism is heavily government regulated, so Scullin first visited the country as part of an approved tour group. He was so compelled by what he found that he volunteered to work for the company and began providing guided tours to travellers.

He said: ‘I’ve always had an interest in countries with a Soviet past. They have such different cultures and aesthetics than we do in the West.

‘Also, the fact that North Korea is so isolated makes it fascinating to see how a country develops outside of the globalised world.’

But why choose to focus on hotels in a country with such an interesting and complex history?

‘It was as much of an objective subject matter as you can get in North Korea,’ Scullin explained.

‘Also, achieving access to hotels isn’t so difficult for foreigners.

‘Their brutalist architecture is a relic of a bygone era and I wanted to document them along with their marbled lobbies, grand dining halls and kitsch karaoke rooms.’ 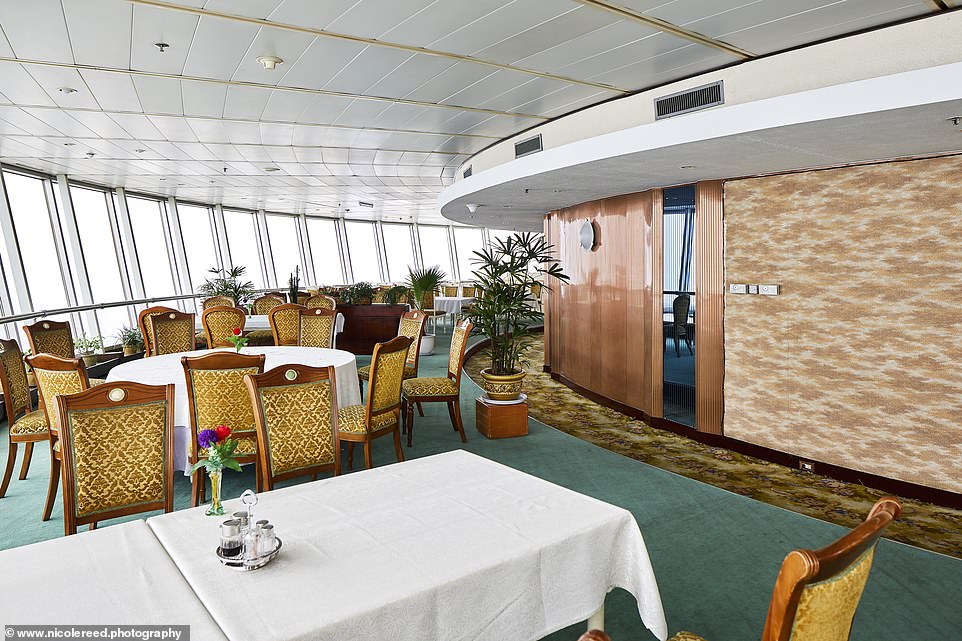 The Yanggakdo Hotel is the one most frequented by Western tourists, reveals James. He explains in the book that guests can enjoy a beer at the local microbrewery and a casino in the basement run by a Macau firm that offers free Wi-Fi for gamblers. There is also a pool, bowling alley and a tailor ‘who will fit out guests in a Western suit or Kim Jong Il-inspired khaki’ 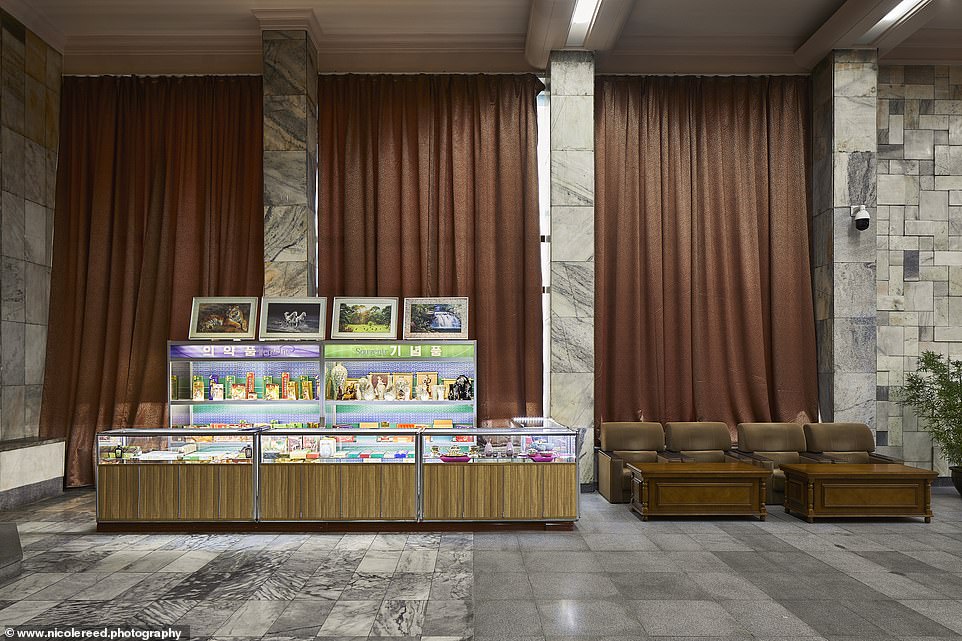 And did he ever feel unsafe on his trips? He didn’t, but acknowledged that North Korea isn’t a country for everyone.

He said: ‘Once on the ground in Pyongyang it was fine. As long as you’re respectful of their different political system, the North Korean guides we dealt with were very easy to get along with. Most tourists develop close friendships with the guides, who are much more personable than people expect.

‘Travelling there is certainly not for everyone, but overall I think it’s better to have engagement with a country like North Korea rather than remain isolated from each other.

‘To see how a country with a completely different society, isolated from the West with its own political, economic and social structures is a unique experience, particularly in the globalised world we live in.’ 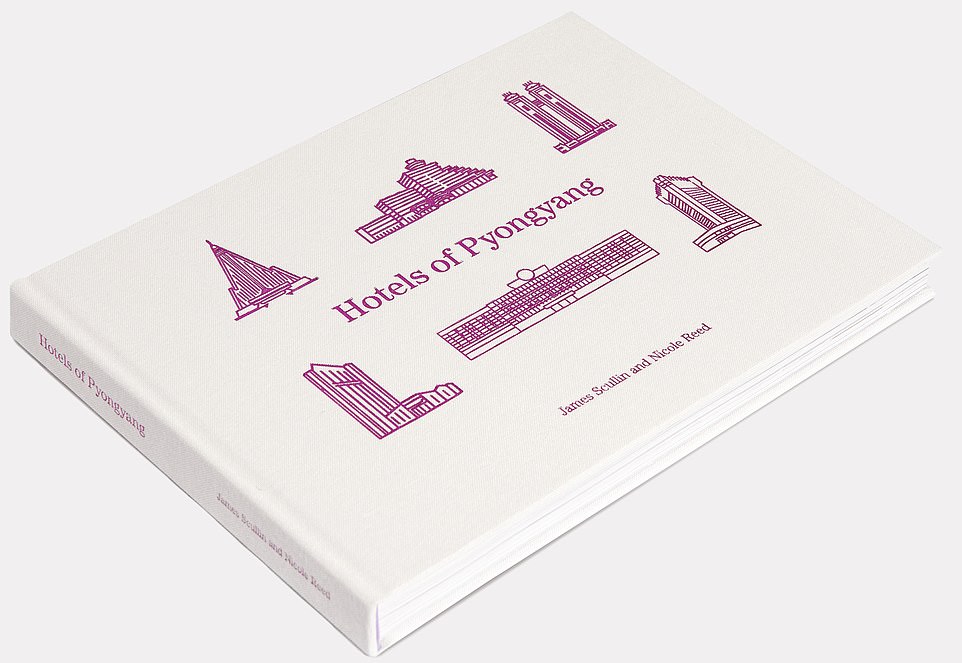