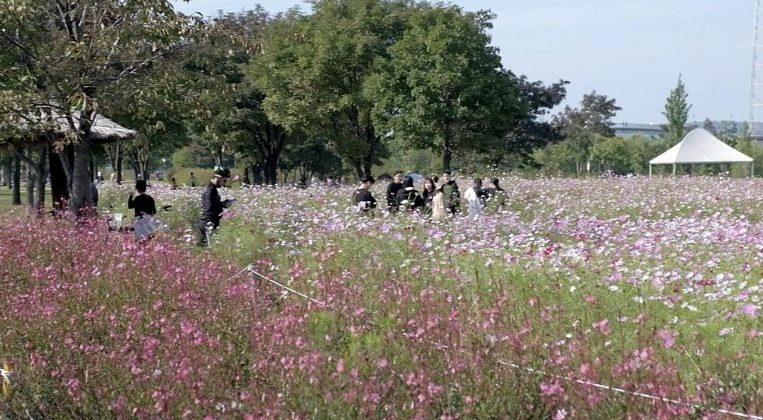 In many K-dramas, it is common to see romantic moments unfold in a park during autumn.

With stunning fall foliage as the backdrop, it is not hard to picture why many tender moments are shared at the park.

One of the most romantic things to do in Seoul, as I found out on a recent trip with my husband, is to rent a bike and ride through Yeouido Hangang Park (bit.ly/2aNWRPg).

Sure, you can cycle any time of the year in the South Korean capital, but the weather in autumn is crisp, there is no hay fever-inducing pollen in the air and the flaming red leaves give off a more passionate vibe than the sweet, innocent cherry blossoms of spring.

Yeouido Hangang Park is located on one side of the Han River, a major waterway in South Korea. The cycling trails are just along the river, where you can also hop on the Han River cruise (bit.ly/2ql0lRs).

The bicycle rental stalls here do brisk business. Prices start from about 3,000 won (S$3.70) an hour depending on the operator, with additional fees for late returns.

Major airlines such as Singapore Airlines, Korean Air and Asiana Airlines offer direct flights to Incheon Airport in Seoul daily. A one-way flight is about six hours and 20 minutes.

Take the subway and alight at Yeouinaru Station on Line 5. Exit 3 will lead you to the Yeouido park, which will be on your left.

• The two-way cycling paths are rather narrow in some areas – stay as far right as you can to let faster cyclists whizz by.

• The weather is quite cool in November, hovering just over the 10 deg C mark. Wear a comfortable top and pants, and layer with a sweater or jacket when it gets colder. Take along a cap or sunglasses as the cycling paths are usually not sheltered by trees.

• There are clean toilets at the main area of the park. It is best to use them before you start cycling. Take along your own water if you wish, but you can buy water and more at the convenience store near the park.

Choose from three types of rides: cruiser ones in white or pink, mountain bikes and tandem or two-seater bikes.

Though the cycling paths are not challenging, a mountain bike allows you to tackle the numerous inclines with a lot less leg power. I rented a cruiser bike and regretted it every time I had to go up a slope.

To finish a decent 16.8km spin in the park, which spans over 1.4 million sq m and 8.4km in length, would take under two hours.

But, of course, give yourself more time if you want to make pit stops and wander off to the many boardwalks along the way, and the pockets of flower fields that make for a great photo backdrop.

Our discovery of the flower fields was rather serendipitous. We had taken a wrong turn on the way back and realised it only when we came across the fields, which we had not passed before.

As Yeouido is Seoul’s main financial district, you will also cycle past glassy skyscrapers and a massive blue domed building that is home to the National Assembly (bit.ly/ 2CUUH00), which is also a popular tourist attraction because of its beautiful architecture. Tours are free, but make your booking at least three days in advance.

If you wish to go farther, there is a 25km cycling path to Amsa-dong, a neighbourhood that was previously a prehistoric settlement site. Here, you can learn about the Neolithic Age from exhibitions, mud huts and relics such as earthenware.

If cycling is not your cup of tea, camp out and chill in the park.

Many people are content to lie back on the grass or on square frames with nets stretched acrossto nap, read or listen to music.

The locals love to go on picnics and do so often. Many groups come with wagons and with foldable tents, tray tables and mats. Tents can also be rented at the park.

After our two-hour bike ride, we walked around the park and found a spot on the net-like structures, where we had intended to take a nap. Unfortunately, our plans were soon ruined by rowdy teenage boys.

But we did not want to leave the park, so we went for a 40-minute return ride on the river cruise.

By the time the sun set, the park was almost covered by tents, some of which were whimsically decorated with fairy lights and lanterns.

When their food and drink ran out, the picnickers made their way up the hill to the bustling convenience store or makeshift stalls ran by perm-haired ajummas (Korean for aunties) that sold gimbap (seaweed rice rolls), instant noodles and eggs.

They waited patiently as their noodles were cooked in cardboard trays and then carefully carried the piping-hot noodle soup back to their spot in the park.