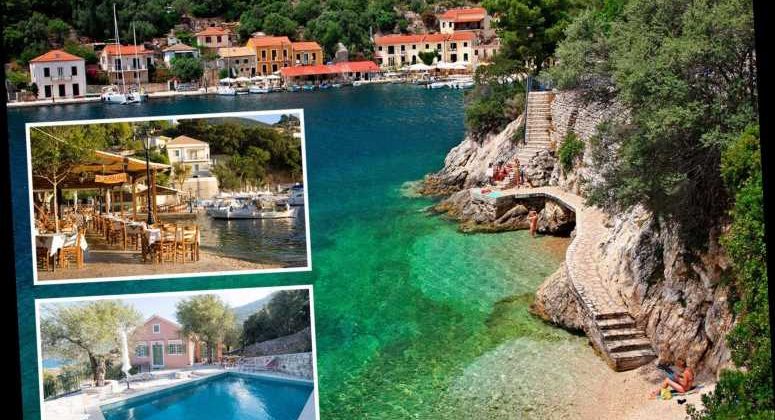 In contrast, our journey to the mythical hero’s island home was an easy three-hour flight from Gatwick. 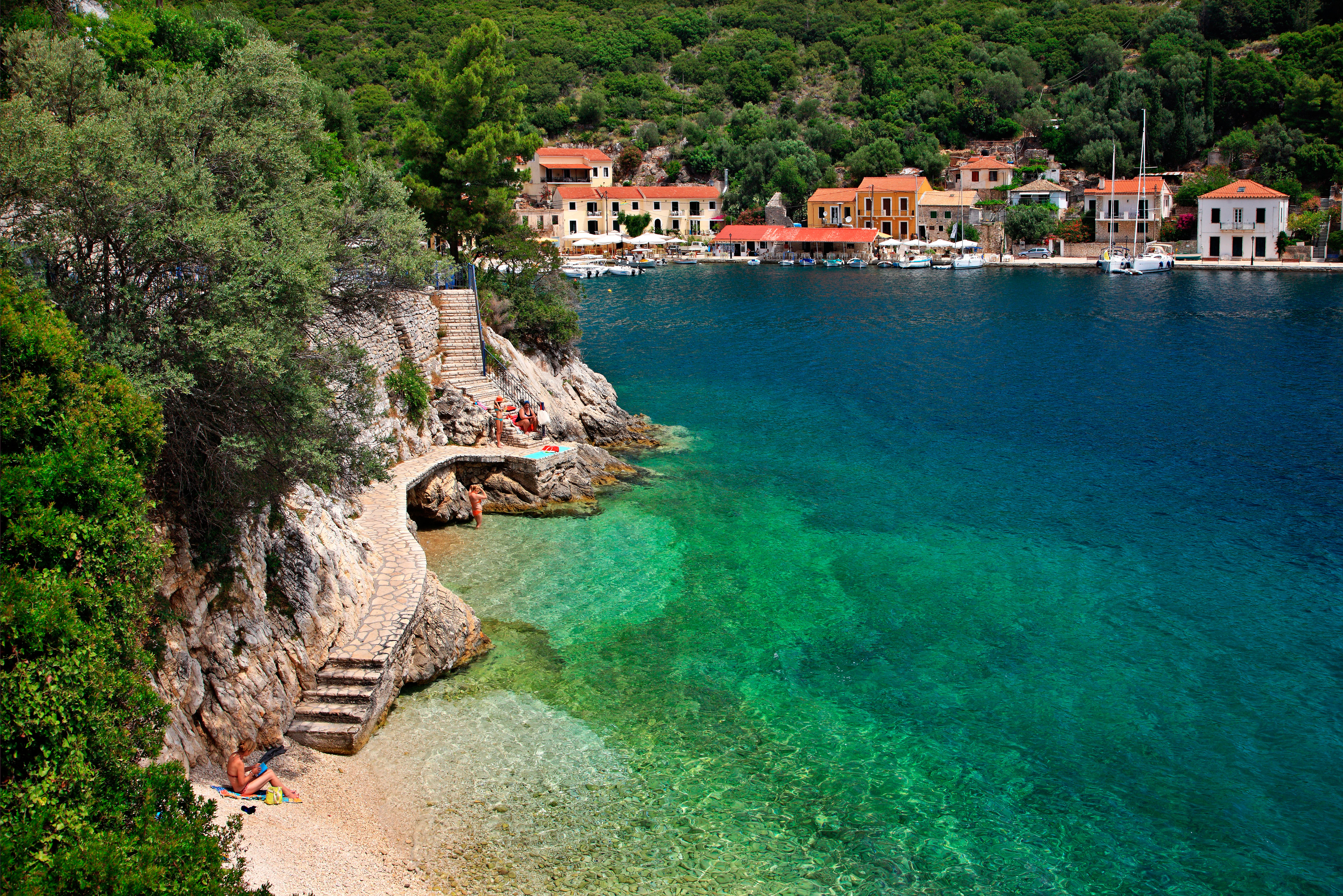 But when we arrived in the baking-hot Ionian islands from drizzly England, we could see why he wanted to get here.

I was on my first journey to the island, along with my wife Lizzy and our children Alice, ten, and Harriet, eight.

We landed on the neighbouring island of Kefalonia, from where we got a ferry to Ithaca’s capital, Vathy. When I say “ferry”, our vessel, The Albatross, was actually more of a traditional wooden sailing boat which had more in common with Humphrey Bogart’s The African Queen than P&O.

We were starting to see that our destination was a little off the beaten track. 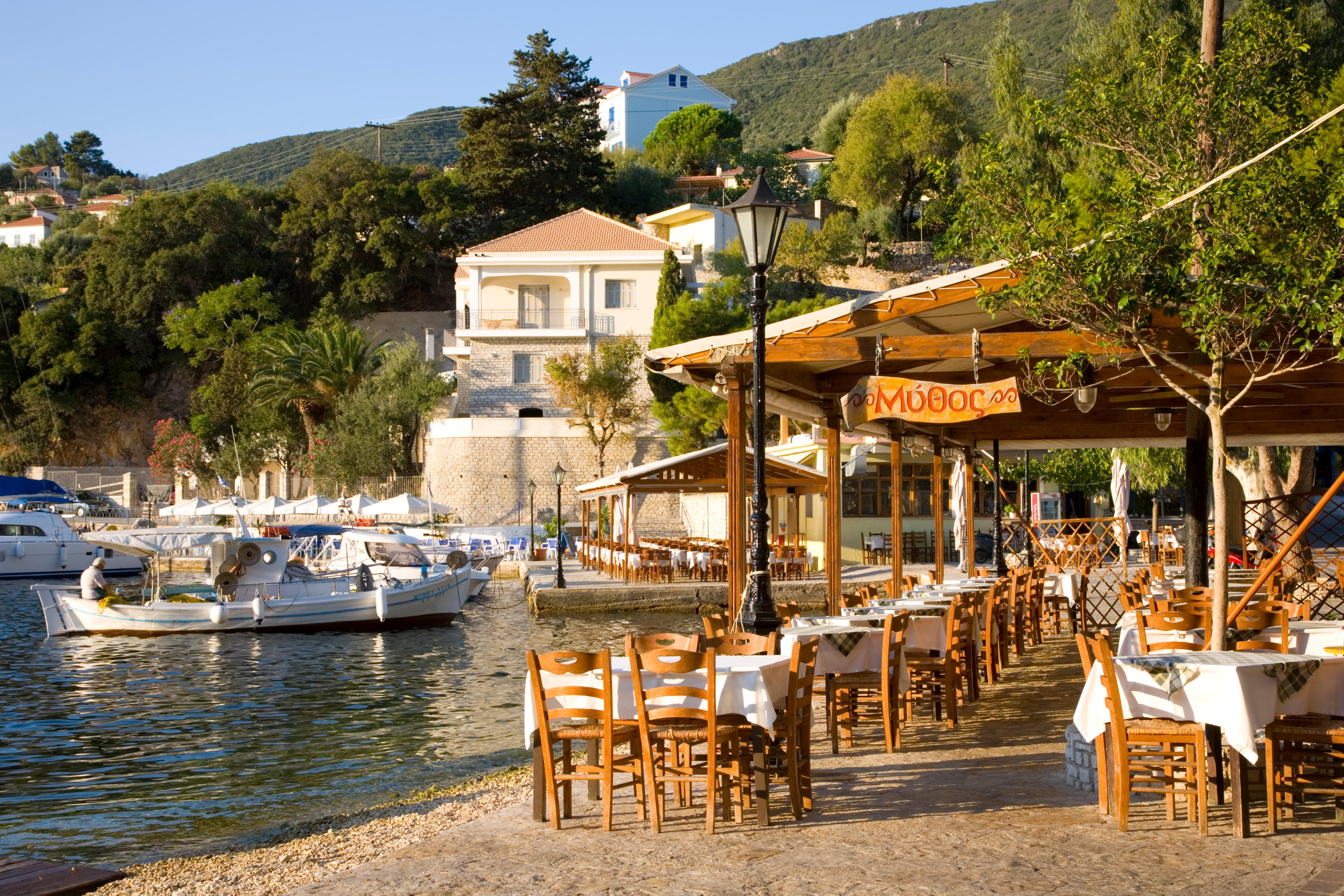 The crossing took 45 minutes across choppy waters but luckily I was fortified by Mythos — “premium-quality Hellenic beer” — which at five per cent is a bit strong for such hot weather.

We were deposited at a tiny, ramshackle port and after a quick exchange of details with the Europcar rep, we were driving up a steep ramp of a hill that twisted its way up the side of the cliff. Steep hills would become a theme of our week here.

Our base for the week was the lovely peach-coloured Villa Nondas, a three-bed gem perched on a hill above Vathy.

From the balcony we had fantastic views into the harbour. In the evening there was nothing more pleasant than watching the sun set while listening to an orchestra playing on an island in the bay. 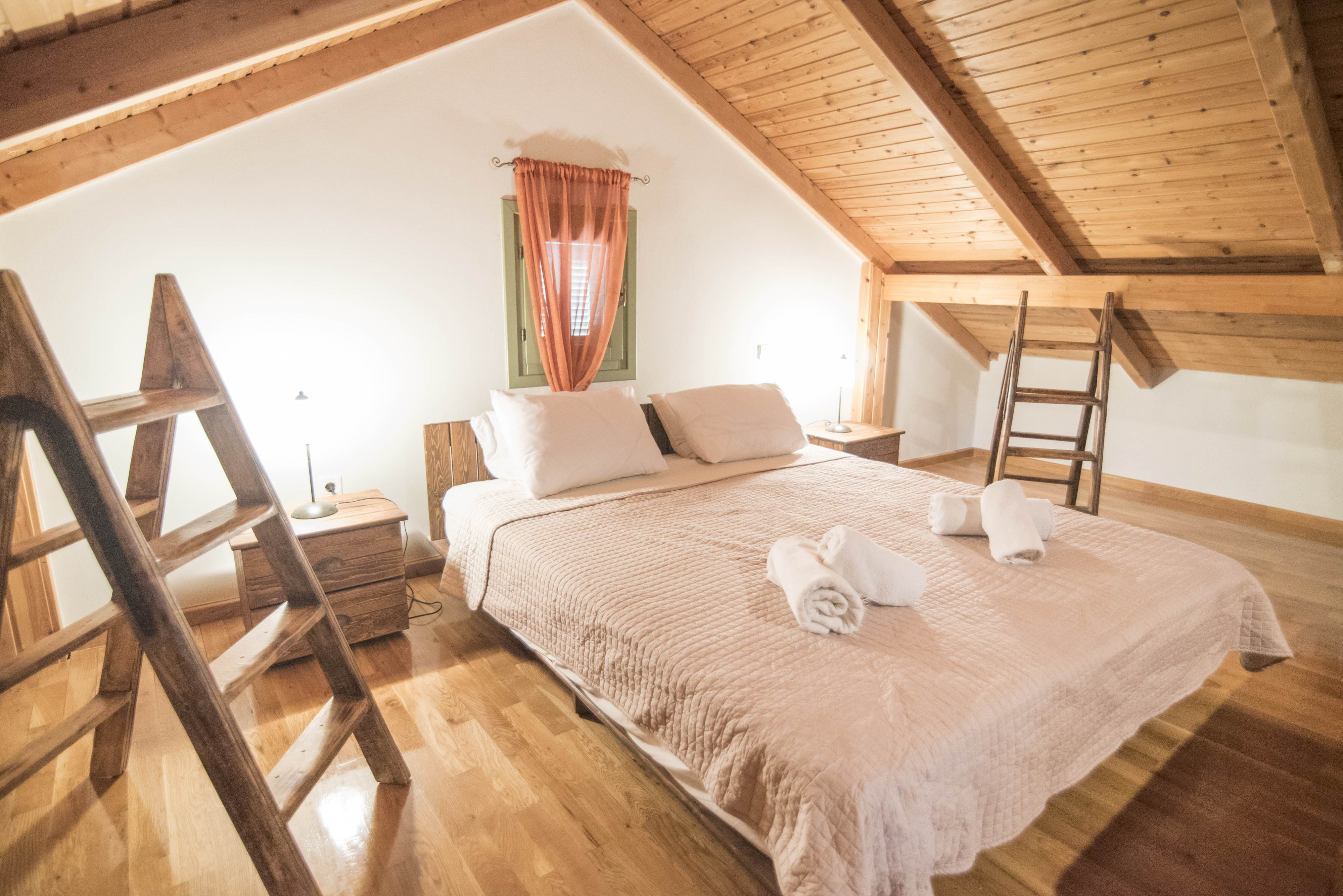 In the mornings we woke to a dawn chorus of barking dogs and crowing cockerels — or chanting priests on one of the many religious days in the valley below.

Crucially in this fierce heat, we also had a pool. The kids immediately dived in while I went into oxygen deficit blowing up an inflatable unicorn their godfather had bought for them. (Thanks for that, Mark.)

Vathy, a ten-minute walk down the hill — or a 30-minute lung-busting hike back up — is a quiet town full of charming old-style shops. We watched two butchers chopping meat with cleavers, looking as if any moment they were about to lose their thumbs. You don’t get that in Sainsbury’s.

Not everything is ideally set up for visitors. One of the main car parks, for instance, has a tree stump bang in the middle of its main entrance.

Life moves slowly here but there are still plenty of tourists.

Indeed, the port is a stop-off for the rich and famous cruising the Med. Their massive yachts, guarded by sinister bodyguards, dwarf the tiny harbour.

We were told by our tour guide Philip Green had been spotted in the area recently . . . but not to let that put us off.

It is not hard to see why so many yachts park up in the harbour. Waterside meals in any of the town’s cafes are a delight. I had several really filling Greek salads with mountains of feta cheese. The girls developed a love of chicken souvlaki. 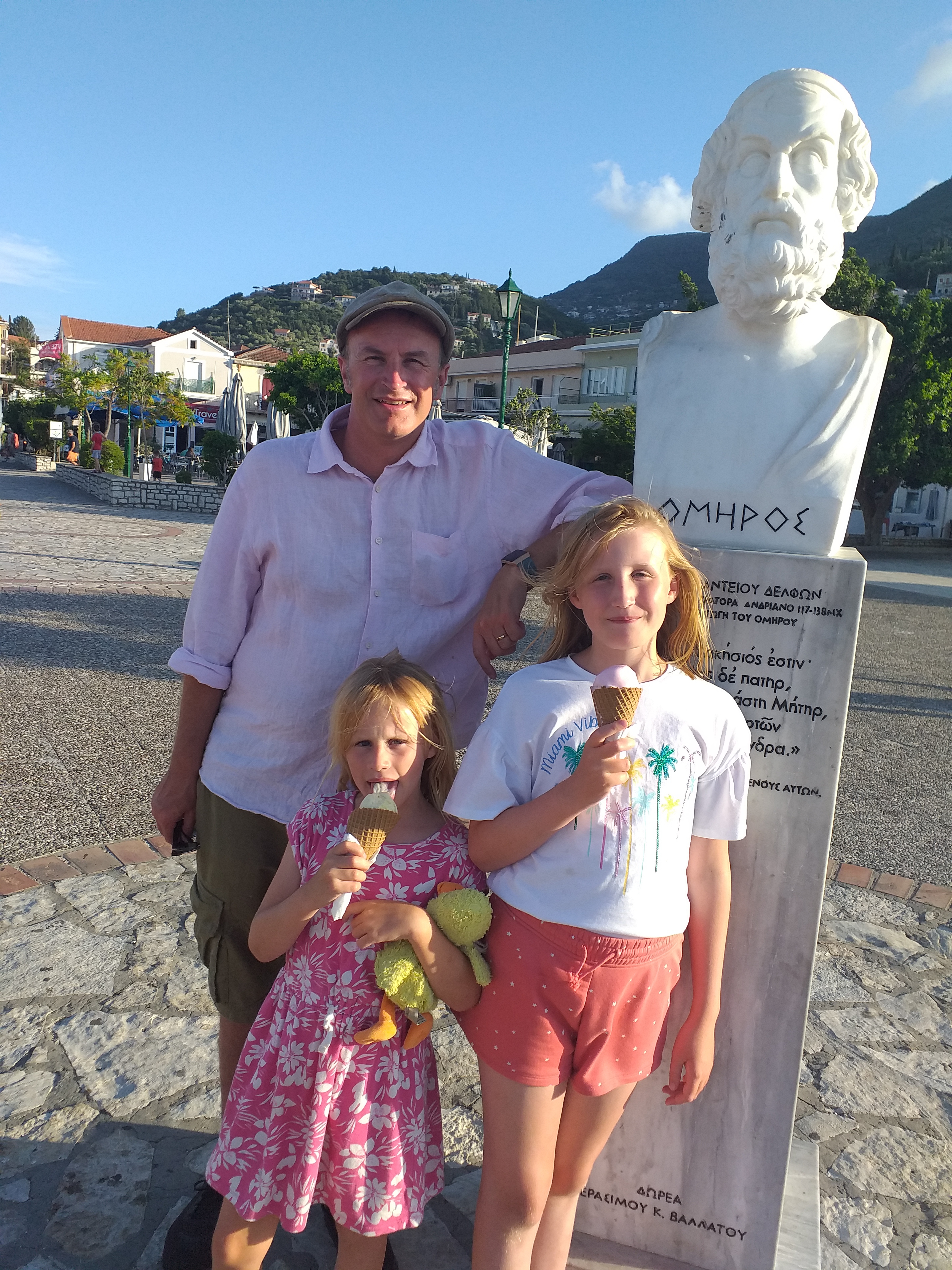 Nikos, a restaurant off the main square, is particularly good, despite a worrying advert outside showing what appeared to be a chargrilled goat on a spit, baring its teeth and glaring with melting eyeballs.

But the food itself came in large quantities, was really tasty and great value.

Wasps, with their tendency to descend from nowhere at lunchtime, were a nuisance. Luckily we soon discovered that most restaurants will give you a pot of burning coffee, the smell of which these pesky jaspers can’t stand.

The island boasts a plethora of secluded beaches in tiny coves, each of which has its own character — sandy or secluded, or pebbly and bleached white by the sun. 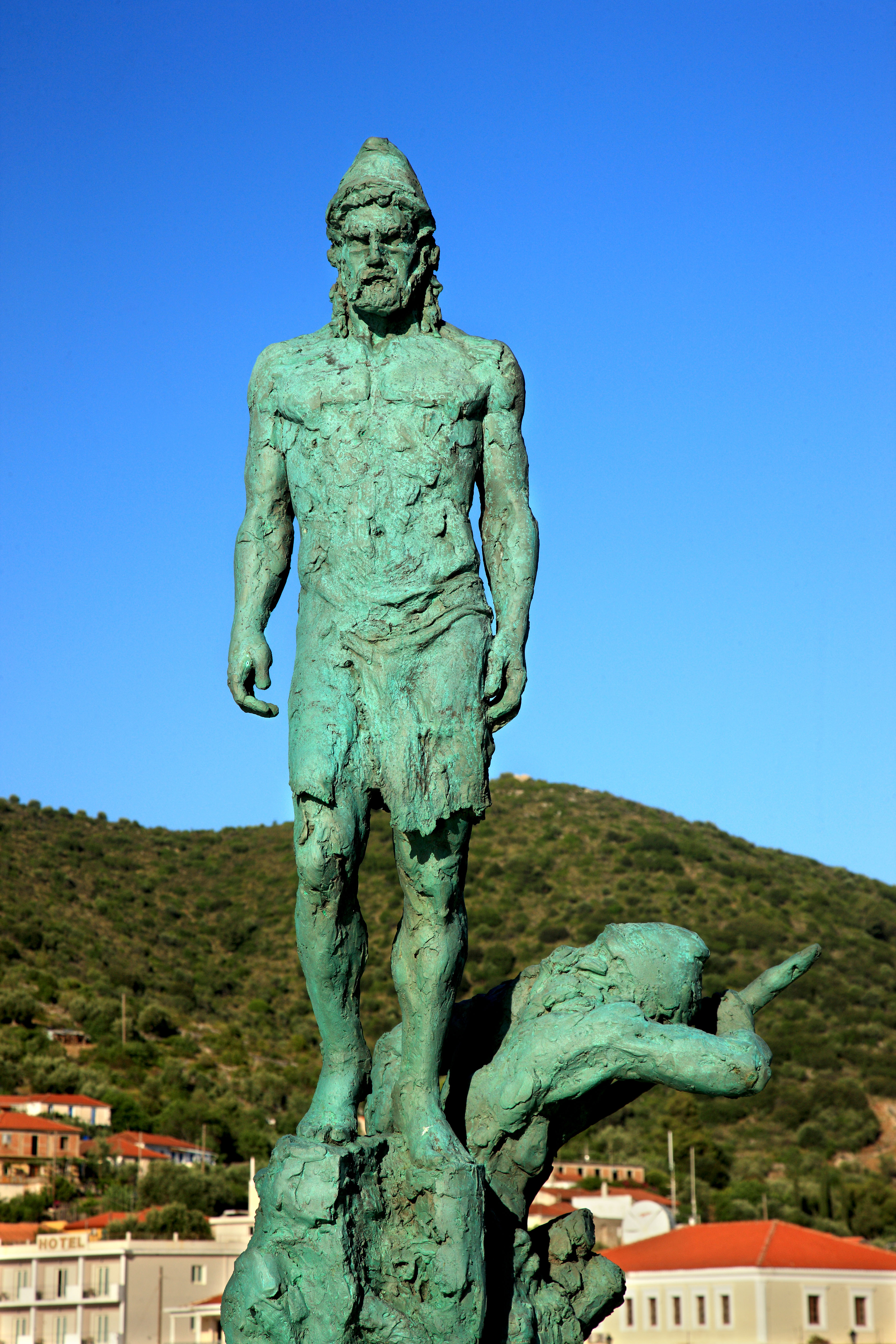 Don’t expect too many facilities. You will be lucky if you get to hire a sunbed and a sunshade. But the turquoise waters provide a lovely chance to cool off from the fierce sun and our kids loved snorkelling and looking at the tiny, brilliantly coloured fish or shoals of silvery sardines.

One of the most spectacular beaches, Aspros Gialos, was reached by windy, steep roads.

When we finally got there, we found a sign at the entrance that read: “No cars beyond this point.”. The advice was hardly necessary, as the road was just 3ft wide.

But a short walk was rewarded by a pebbly beach, also bleached white — ideal for the girls to compete at finding the most interesting stone — leading down to waters that are turquoise at the shore then a bright blueberry as it suddenly deepens. 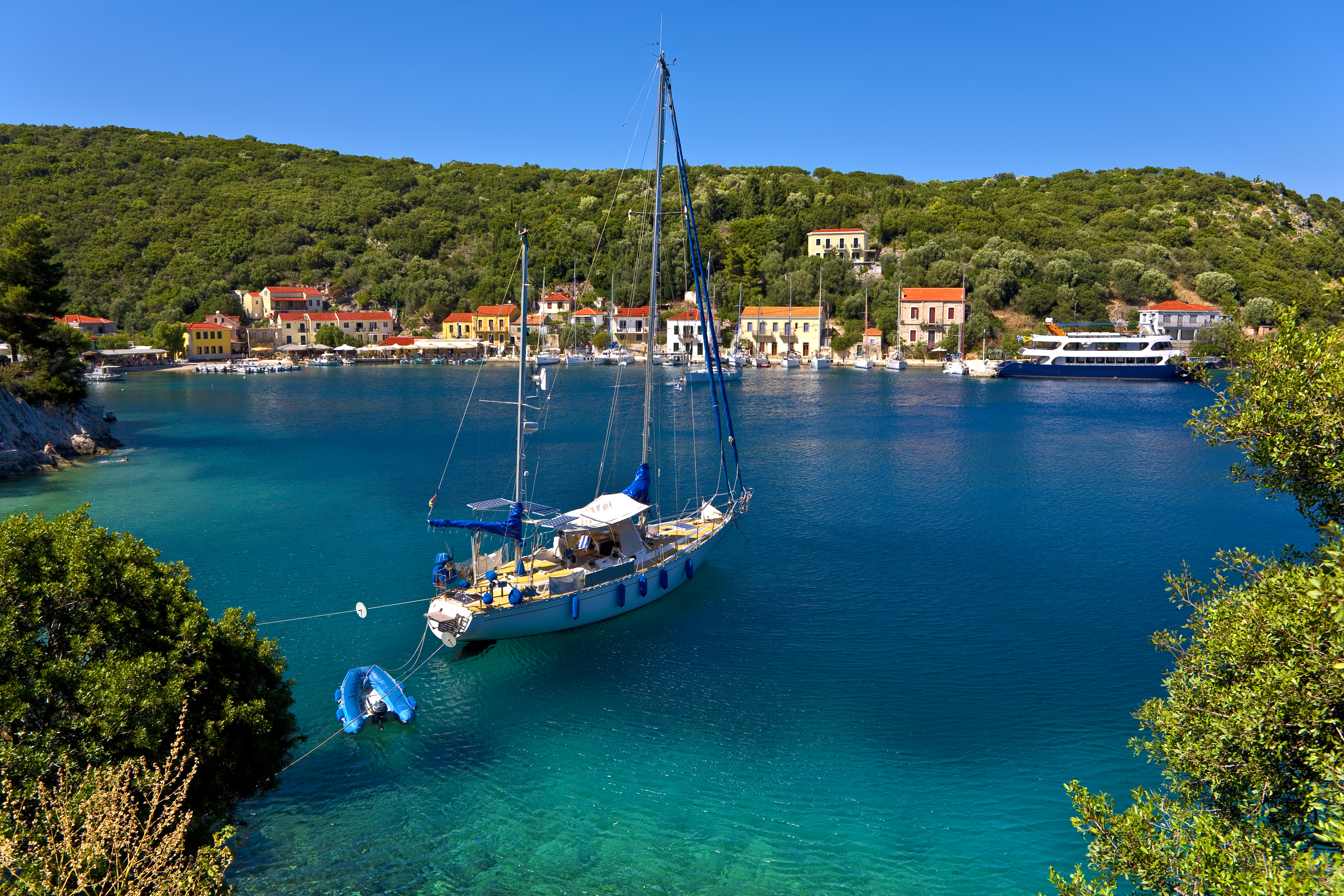 Others worth visiting include Gidaki, a lovely wide beach facing bright-blue sea, skies and mountains; and Dexa, which is so narrow the water splashes up on a ledge in front of your sunbed and cools your toes. Afales, at the top of the island, is narrow, with stones so tiny it is almost like stepping on sand.

If you have a taste for sea life, it is worth going diving. Trips are easy to arrange in Vathy.

The kids were kitted out with flippers, wetsuits and breathing equipment and we boarded a boat skippered by a genial guide who joked that we should keep away from the sharks.

Hattie was taken snorkelling along the surface by a guide who showed her all the fish. Alice, who was really brave, went for the full two-metre-deep dive and was thrilled to see an octopus. 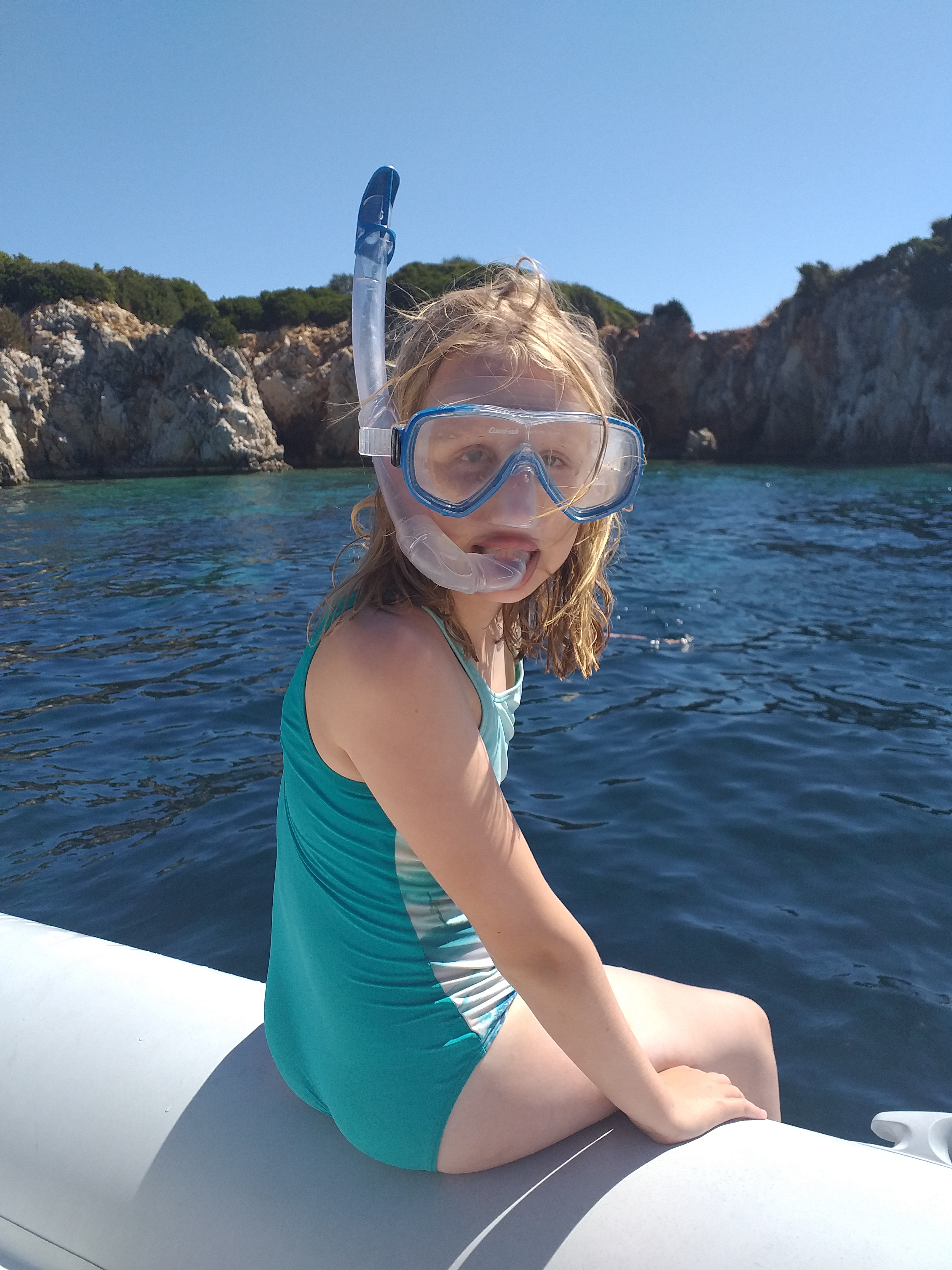 Alternatively, if you want a more relaxing day on the water, there are loads of boat trips to try. We went on an open-decked tour of Lefkada Island to the north of Ithaca.

We bounced over the deep-blue and turquoise Ionian Sea, canopied by duck egg-blue skies without a cloud in sight. All we could see on the horizon was the distant outline of islands and white sails.

At one point we were accompanied by a pod of dolphins jumping up and down next to our boat.

After a stop-off for a meal at the flower-festooned bay of Sivota we had an exhilarating trip back into waves breaking on to the deck. By the time we got back we were drenched. But in this climate you soon dry out. 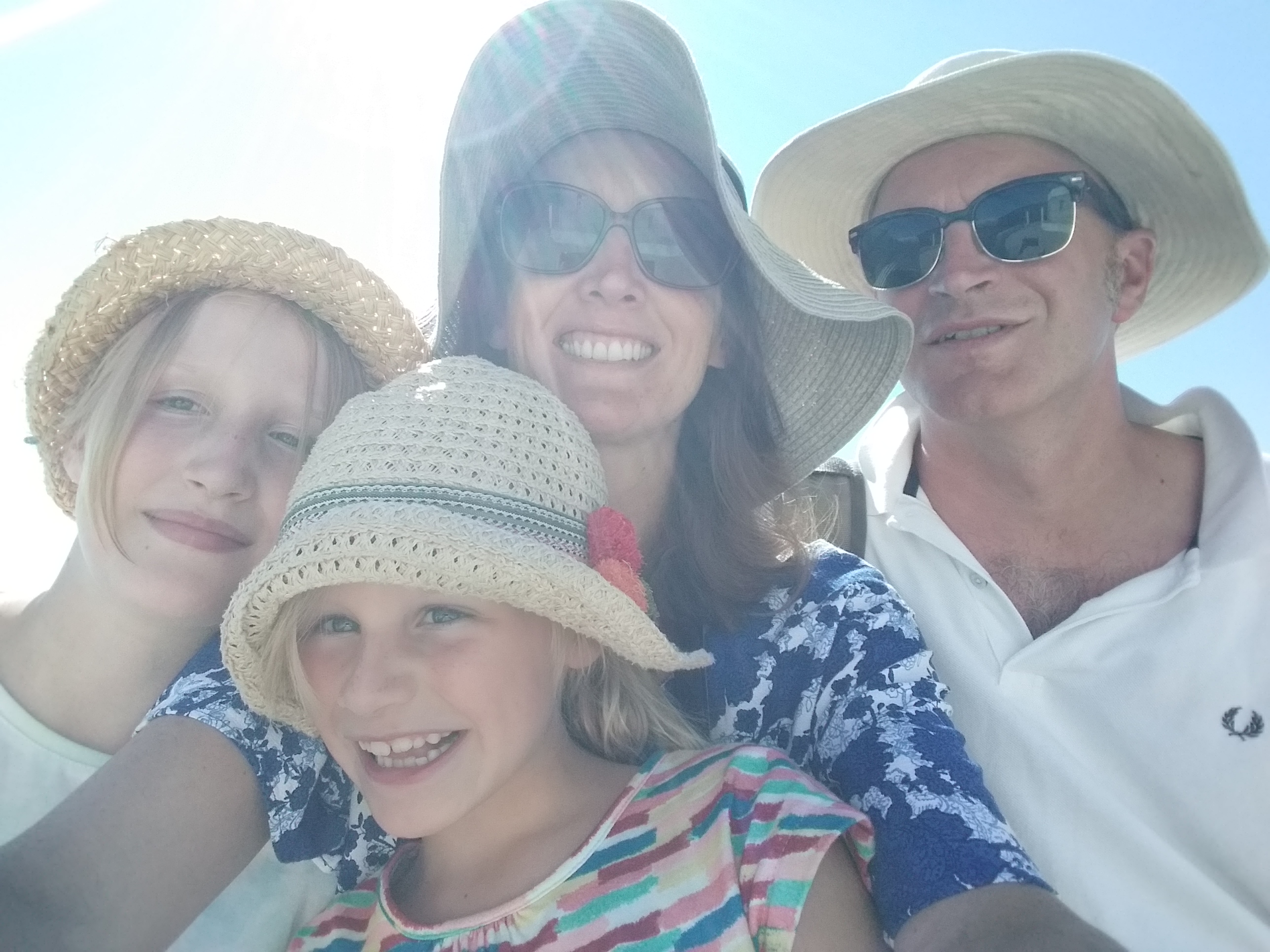 If you can stomach the narrow roads steep as ski jumps, there are plenty of secluded villages to discover. But take your time and try not to be disturbed by the lack of crash barriers next to vertical drops at the side of the road.

On one such excursion we drove along a twisting, narrow road that kept rising for ever until we reached the Monastery of Kathara, high in the mountains.

Climbing its bell tower gave us a view across the southern side of the island.

We kept driving to what seemed like the ceiling of the world and the tiny village of Anoghi, site of Sophia’s Cafe, a bohemian restaurant with bottles on the bar and art on the walls. Sophia, the owner, makes wonderful lemonade.

Exogi, if you have a real head for heights, is perched on the highest and most northerly bit of the island.

The drive is full of scary switchbacks on narrow roads with sheer drops. It has three churches for just 50 residents.

There is also an otherworldly concrete pyramid and circular tower. No one seems to know who built them, or why, but they give spectacular views.

Stavros is a charming little village with a main square boasting a bust of Odysseus, whose palace is believed to have been located on the outskirts. 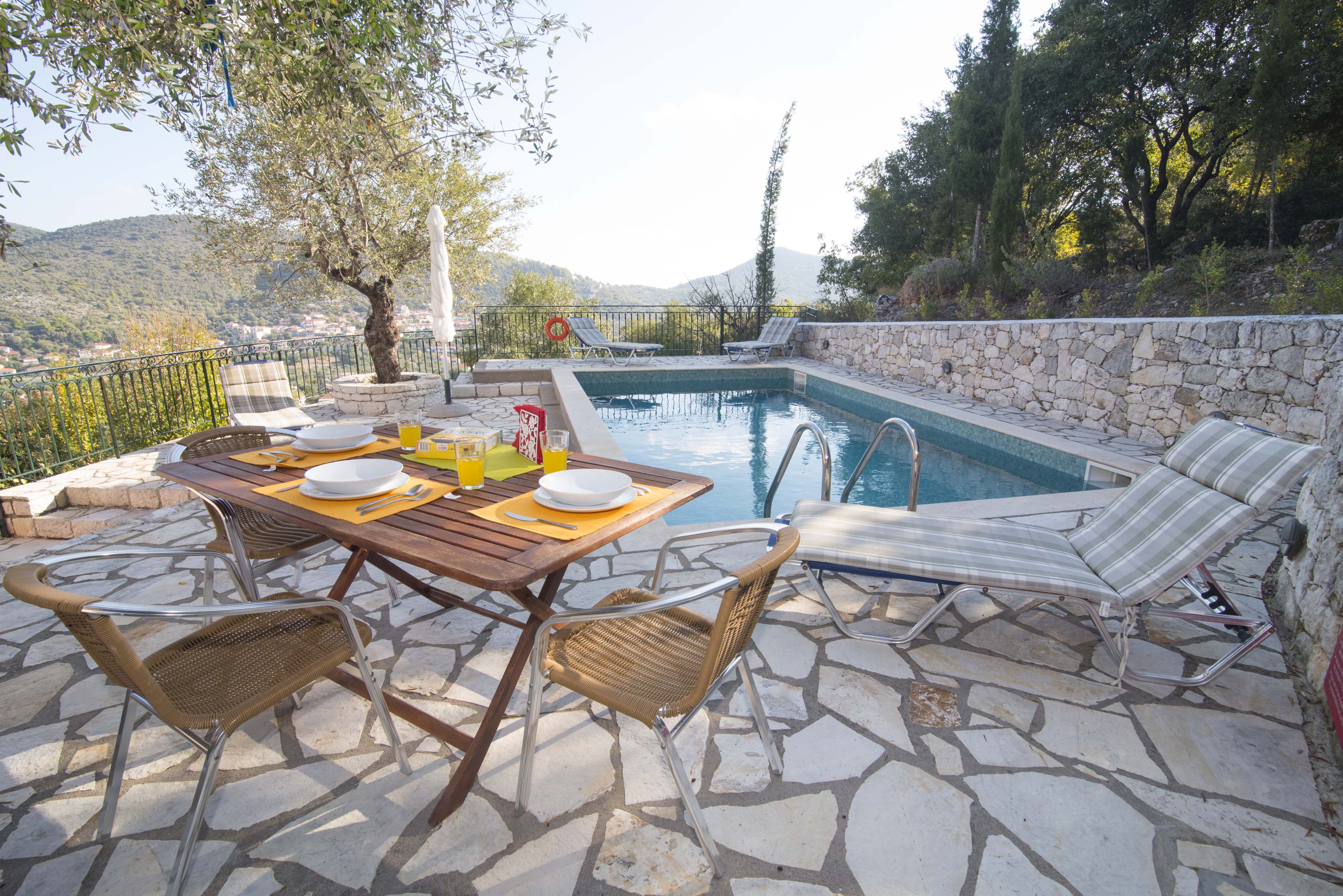 The local cafe is decorated with scenes of his exploits from the Odyssey. Head to the coast and you will eventually find the tiny fishing village of Frikes.

There we ate omelettes at Fiorendino, a cafe run by an Aussie, with a surfboard and rugby shirts on the wall.

Kioni, a bit further along, is a similarly idyllic seaside village where we ate in Calypso’s restaurant, surrounded by cats begging for food. Some were so cheeky they hissed at the girls for not sharing their dinner.

On our final evening, the weather finally changed. In place of the baking sun there came a strong wind which accosts the masts of the boats in port.

Odysseus was famously punished by the Gods by being shipwrecked off the coast of Ithaca.

I am not sure if this particular squall was conjured up by Poseidon but while sipping a can of Mythos on my balcony, I suddenly felt sorry for the millionaires stuck in their luxury cabins.

At any rate, I hope it won’t take me ten years — as it did poor Odysseus — to find my way back to this hidden jewel in the sparkling Ionian Sea.

KEFALONIA, where flights land before you continue via ferry to Ithaca, is currently not on the list of Greek islands you are required to self-isolate on return from.

GETTING/STAYING THERE: GIC The Villa Collection has a week’s stay at Villa Nondas in 2021 from £921pp, based on six sharing.

The villa is fully booked for the 2020 season.

Also available is Lefki Villas – where seven nights’ self-catering is from £887pp, based on two sharing and including flights from Gatwick with luggage to Kefalonia on October 3, boat transfer to Ithaca and car hire.