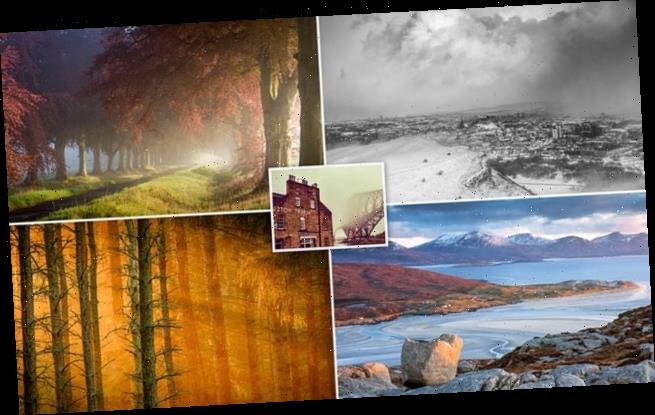 Snow-capped mountains and tranquil lochs: The stunning best entries in the Scottish Landscape Photographer of the Year competition, with a frontline doctor declared the overall winner

A frontline doctor has been crowned the winner of a photography competition that aims to capture Scotland’s natural beauty.

Inverness-based Dr Kenny Muir scooped the title of Scottish Landscape Photographer of the Year with his portfolio of three stunning images shot in remote Glen Affric and on the Isle of Harris. 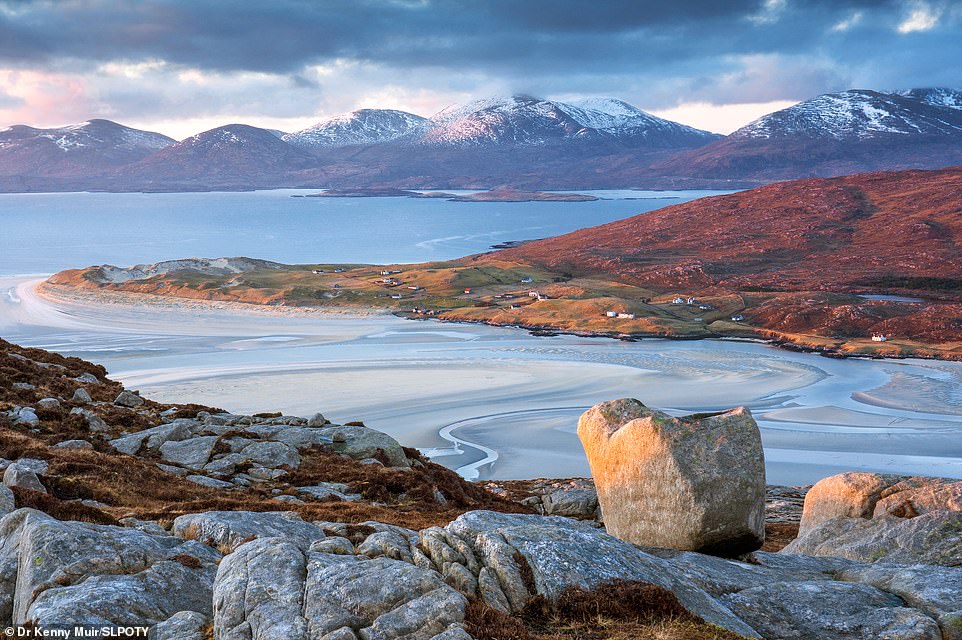 One of the pictures by Dr Kenny Muir, which helped him scoop the title of Scottish Landscape Photographer of the Year.  This one shows a Seielbost gneiss boulder glowing in the evening light close to the Luskentyre Estuary on the Isle of Harris 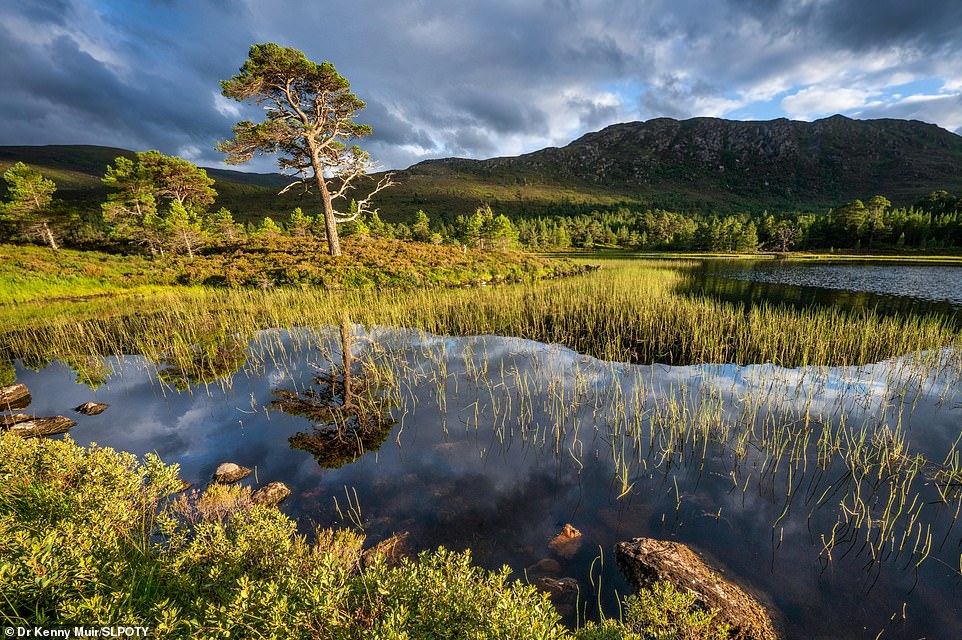 Dr Muir took this image in Glen Affric. It shows Loch Salach a’ Ghiubhais (Dirty Loch of the Scots Pine). He said: ‘The ancient Scots pine which provides the focal point, is surrounded by regenerating woodland’ 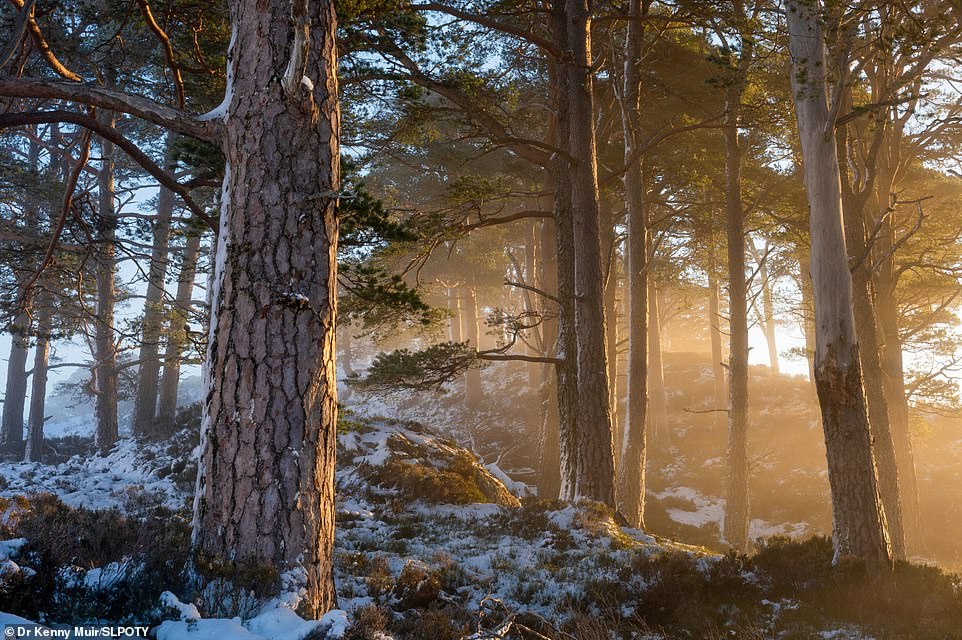 Dr Muir called this image Wild Caledonia. He said: ‘Morning light hitting the native Caledonian pinewoods of Glen Affric after snowfall. This was possibly the coldest morning of 2019 at -12C’ 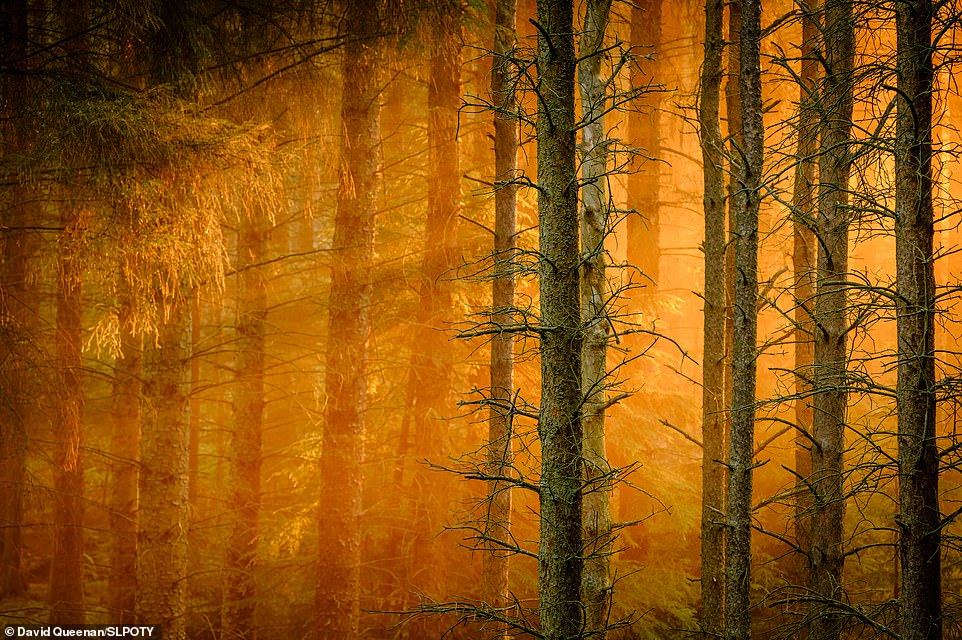 David Queenan was named the overall competition’s runner-up with his portfolio of three pictures. One of them is this stunning image of golden pine trees taken in Beecraigs Country Park in West Lothian. He said: ‘After a failed sunrise shoot at Linlithgow Loch due to thick fog I relocated to the nearby Beecraigs and was just in time to catch the sun breaking through the mist and tall pines’ 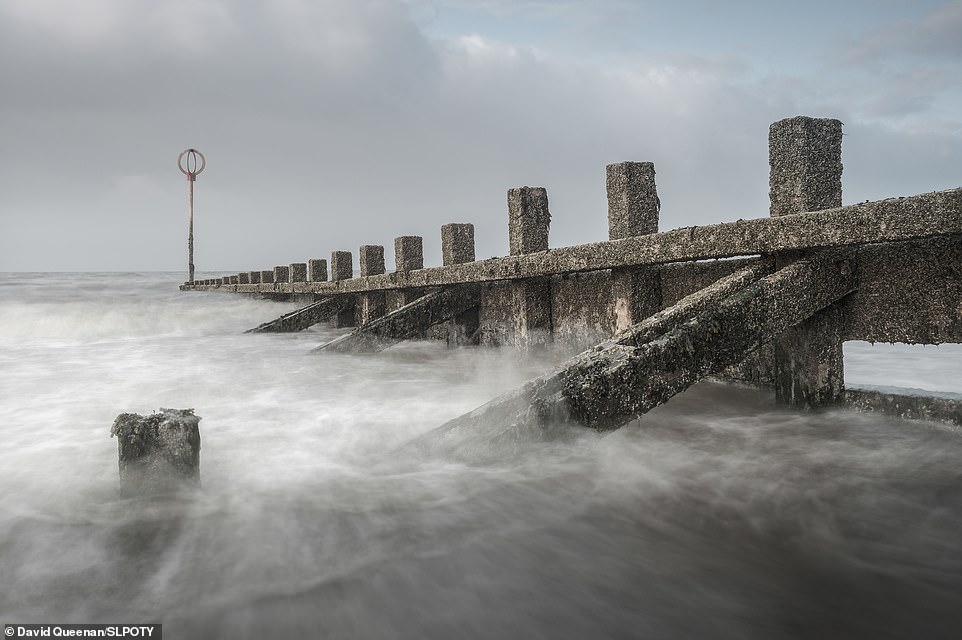 Another stunning image by runner-up David Queenan. It shows waves lapping up against a groyne on Portobello beach in Edinburgh. He said: ‘Despite being a pleasant summer evening a large bank of cloud blocked the setting sun – but it also helped to simplify the scene and give the image a monochromatic colour palette’ 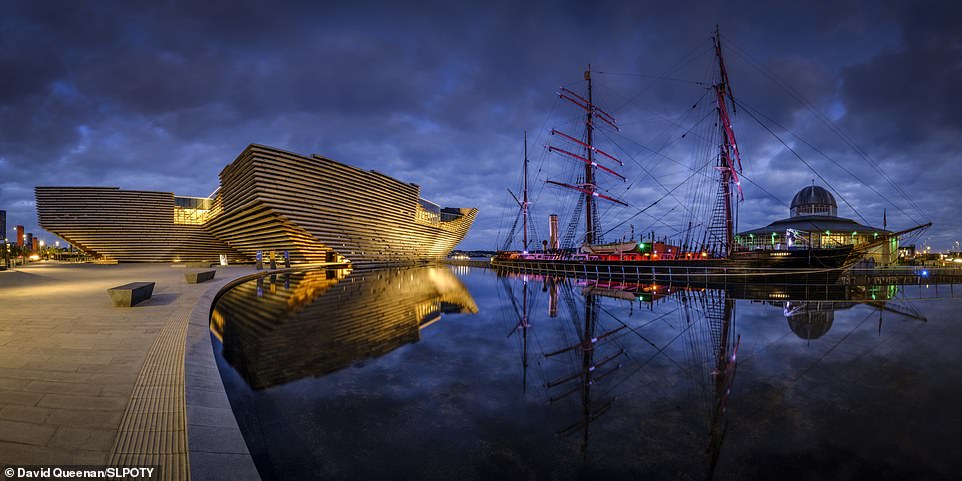 David Queenan’s serene shot of Discovery Point in the city of Dundee. David said: ‘After taking in the Scottish Landscape Photographer of the Year exhibition at Dock Street Studios, I popped over the road to capture a panoramic image of the V&A Museum and Captain Scott’s ship, RSS Discovery’

The second shows one of the small lochs deep within Glen Affric, while the third is a tranquil shot of the Luskentyre estuary with the mountains of North Harris behind it.

Dr Muir, who works at Raigmore Hospital in Inverness, said: ‘I am shocked and delighted to have won this competition, particularly when surrounded by so many talented photographers.

‘Two of the winning images are part of a personal project to document the wilder side of Glen Affric, one of Scotland’s largest remnants of Caledonian Forest. I hope to highlight the importance of preserving and regenerating these areas of natural beauty.

‘As a hospital doctor I will be taking a break from photography to focus on current events, but really appreciate receiving the award.’ 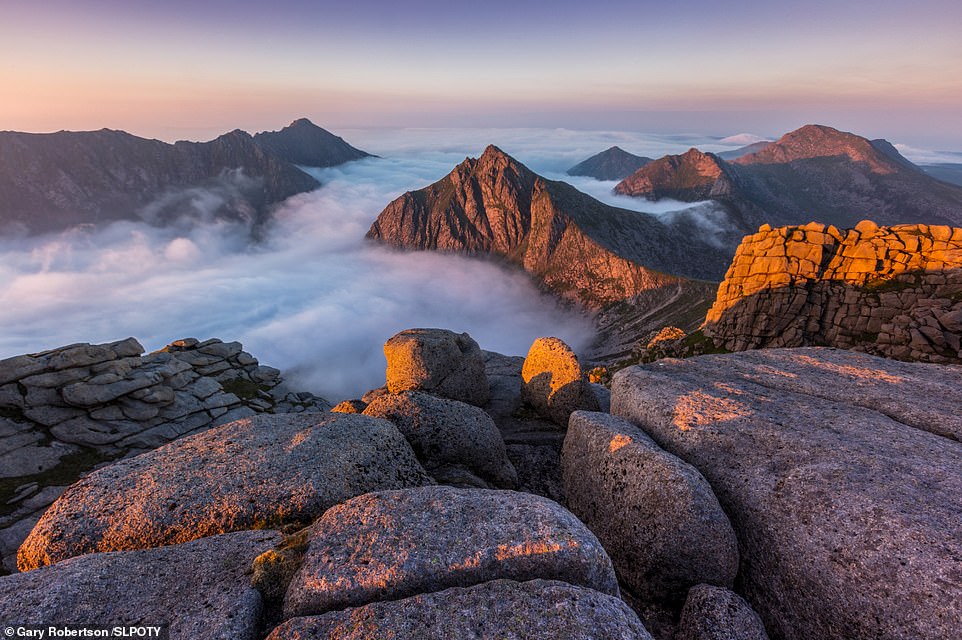 Photographer Gary Robertson captured this stunning image of Cir Mhor on the Isle Of Arran. It earned him the runner-up spot in the landscape category. He said: ‘A summer bivvy on Caisteal Abhail’s summit rewards us with a wonderful sunset followed by the most beautiful sunrise cloud inversion, including awe-inspiring views of Cir Mhor and Goatfell’ 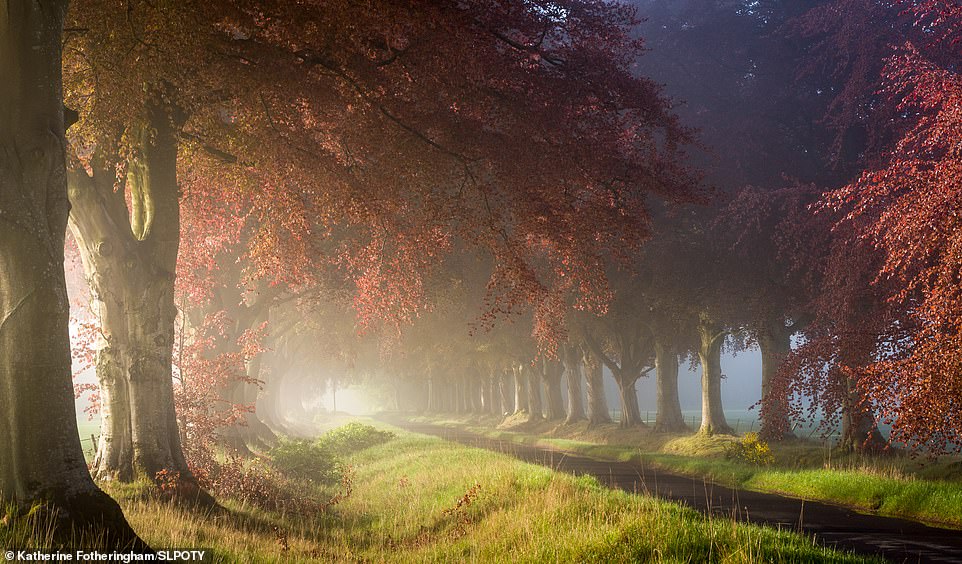 The winner of the spring award in the four seasons category was Katherine Fotheringham for this stunning shot she called Copper Beech Light, which was captured in Scone, Perthshire 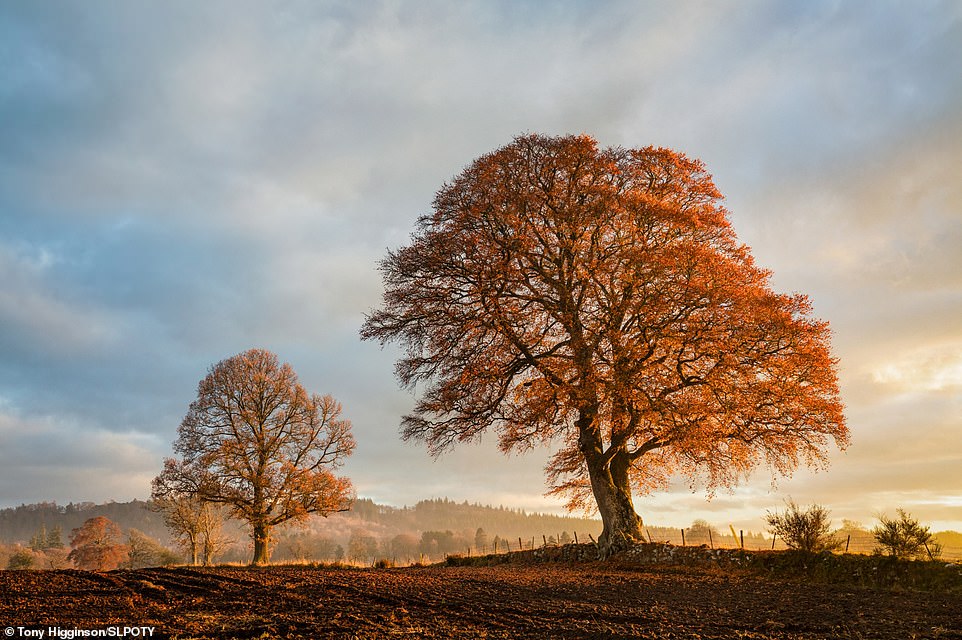 The autumn award in the four seasons category went to Tony Higginson for this incredible shot he captured near the River Beauly in Balchraggan in the Scottish Highlands. He said: ‘I spotted these classically shaped beech trees illuminated by the warm light of the setting sun. An amazing evening where everything seemed to be glowing, these trees were just begging to be photographed’

The winner of the landscape category was Ben Eaton-Williams with this image, which he called Raging Ridge 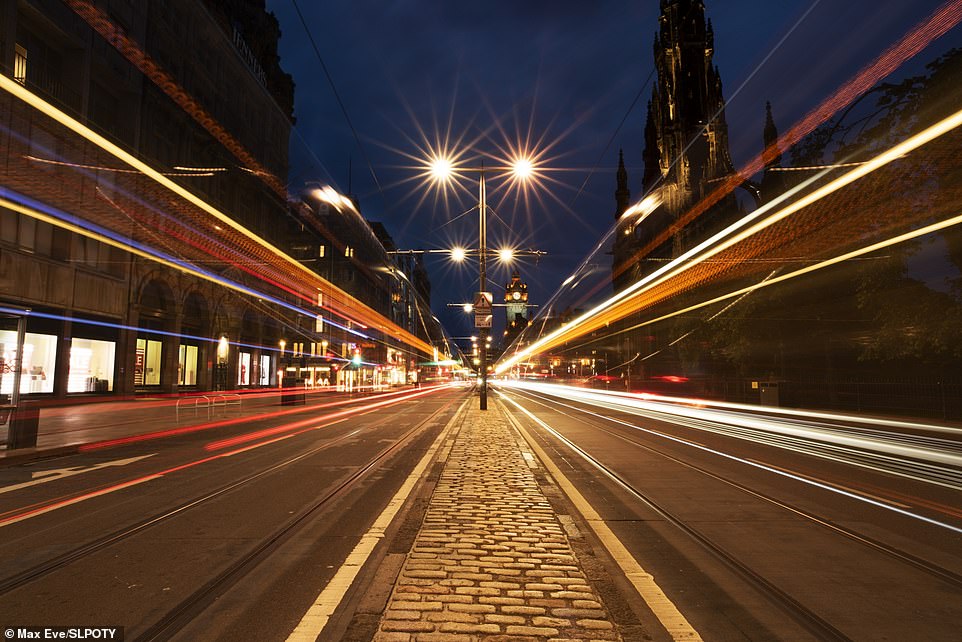 Max Eve was named runner-up in the youth category, thanks to this amazing shot of Princes Street in Edinburgh. He explained: ‘I combined two exposures of the same tram travelling in opposite directions’ 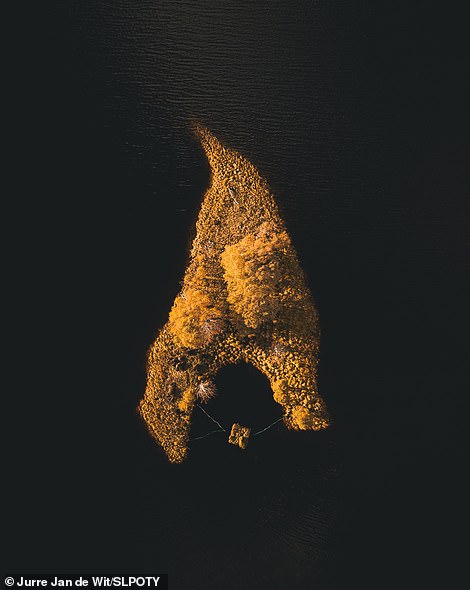 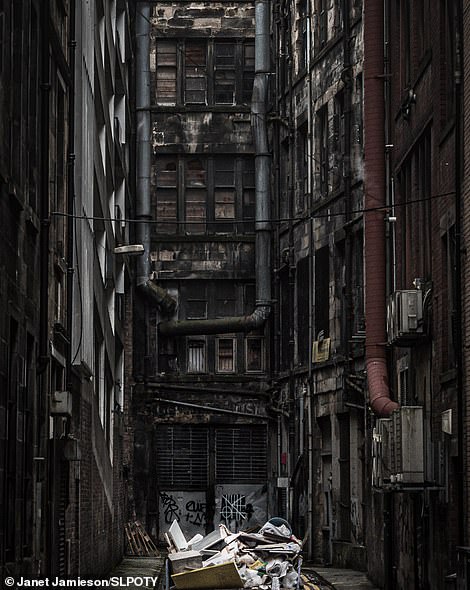 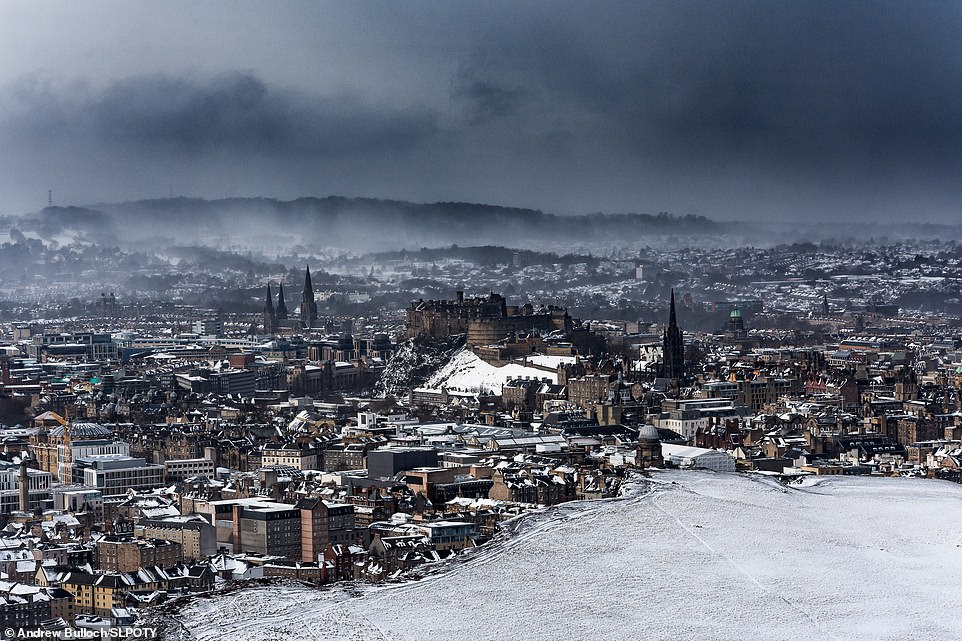 Andrew Bulloch was named the winner of the youth category for this snowy image of Edinburgh, which he took from the top of Arthur’s Seat

Runner-up in the overall contest was David Queenan, who captured golden pine trees in a West Lothian park and waves crashing against a groyne (an anti-erosion barrier) on an Edinburgh beach.

In addition to the overall award, the Scottish Landscape Photographer of the Year competition handed out gongs in several other categories – landscape, seascape, urban, monochrome, four seasons, Scottish weather and your vision.

The competition, now in its sixth year, is the brainchild of Perthshire-based landscape photographer Stuart Low. 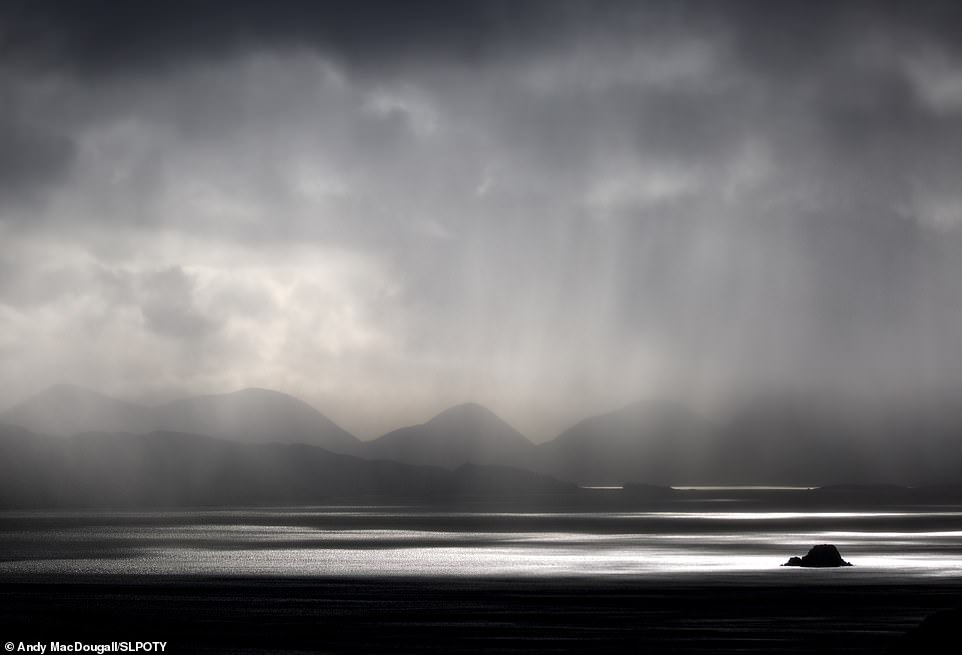 The winner of the Scottish weather award was Andy MacDougall for this shot of the Sound of Raasay on the Isle of Skye. He said that the image was a ‘great reward after days of wind and rain had made photography difficult’ 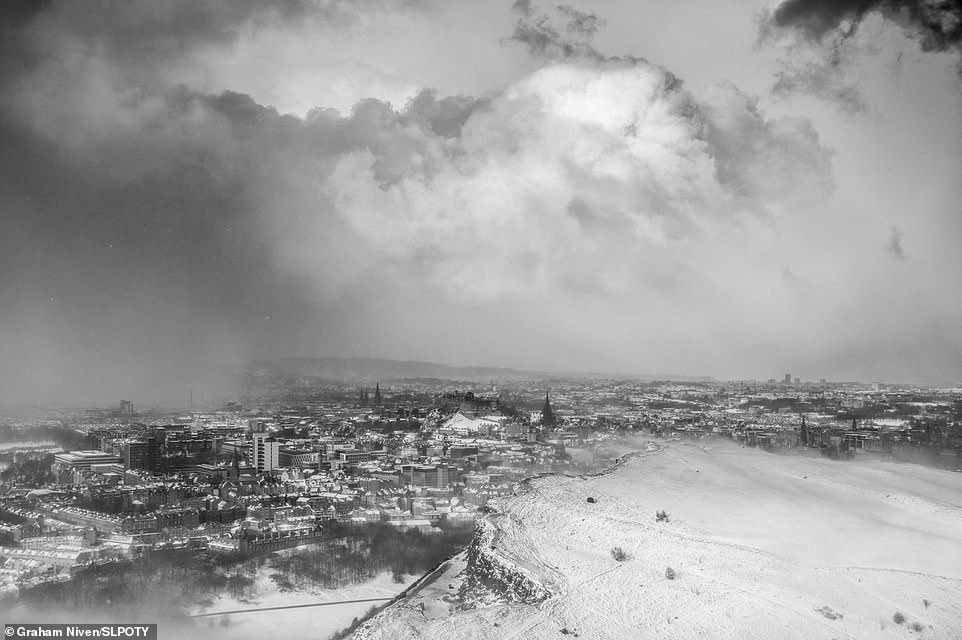 Graham Niven was the runner-up in the Scottish weather category thanks to this image, which shows the city of Edinburgh during wintry conditions. He said: ‘March 2018 saw wild Arctic blasts sweeping across the country. I managed to make my way up Arthur’s Seat to capture a familiar view in unfamiliar conditions – with epic snowy squalls sweeping across the city’ 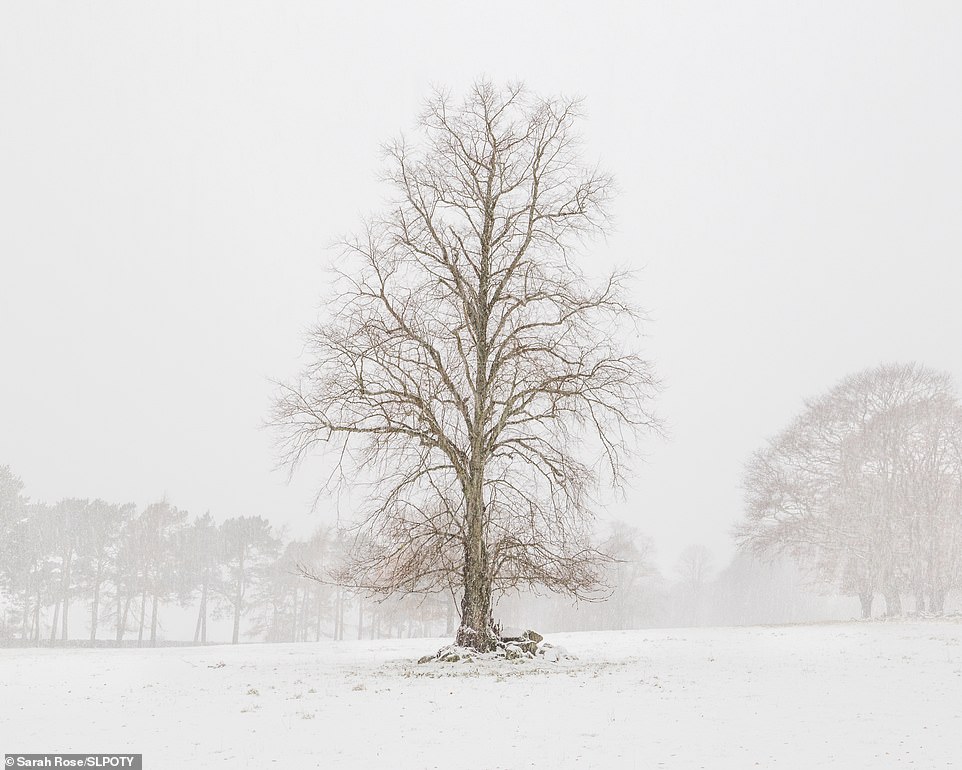 The winter award in the four seasons category went to Sarah Rose, who snapped this image while on a snowy walk in Aberdeenshire 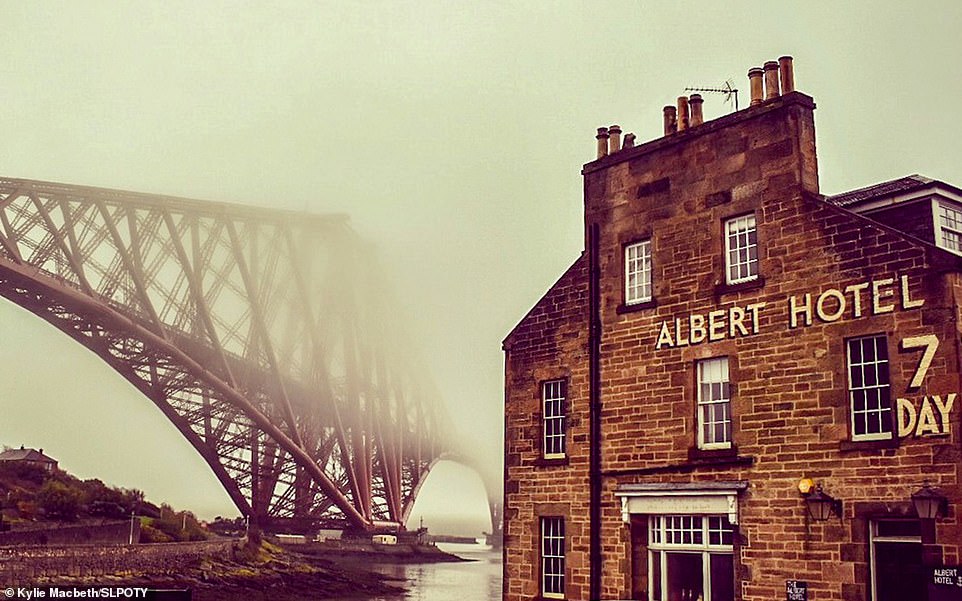 Kylie Macbeth was the runner-up in the urban category for her photo Into the Fog, which shows the Forth Rail Bridge in North Queensferry. She said: ‘On the way to visit my Grandma for her 96th birthday in North Queensferry, I just had to jump out the car and capture this scene. I had just taken up photography that month’ 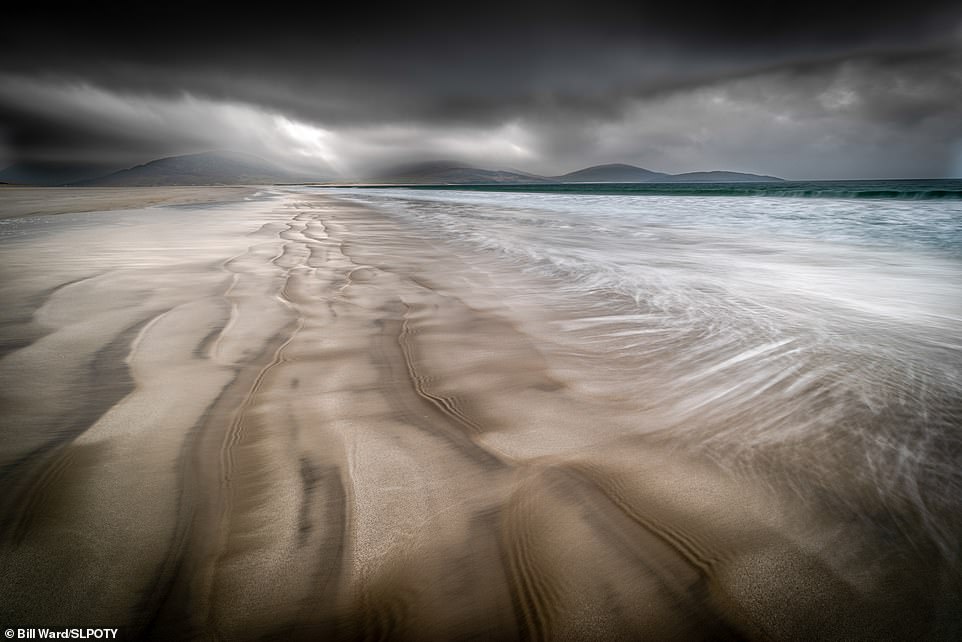 Bill Ward was the winner of the seascape category for this dramatic shot showing an incoming storm in Luskentyre on the Isle of Harris. He described it as an ‘extraordinary winter’s afternoon’ 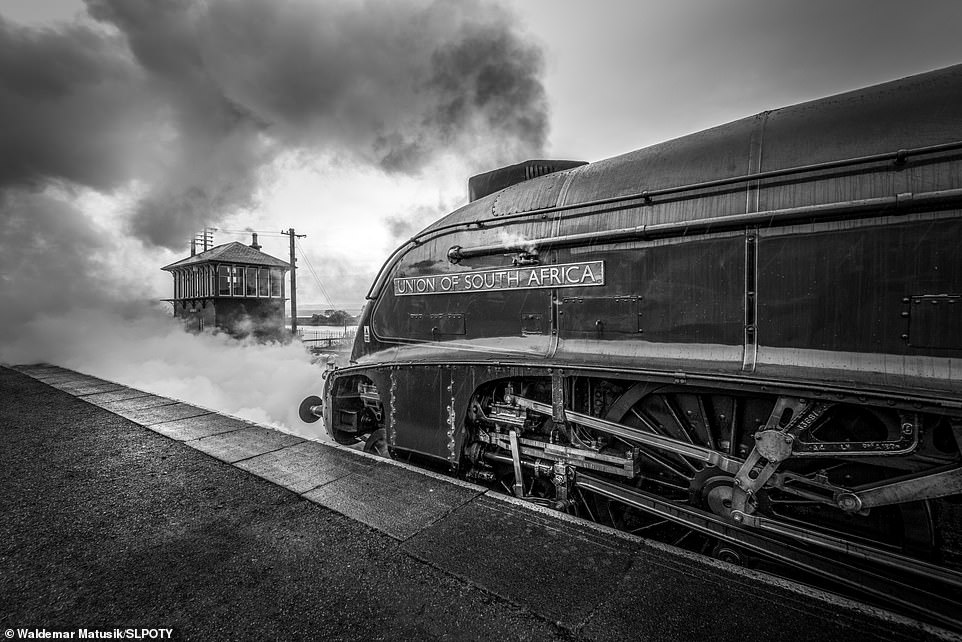 The runner-up spot in the monochrome award went to Waldemar Matusik, who captured this stunning image of the Union of South Africa at Bo’ness & Kinneil Railway Station 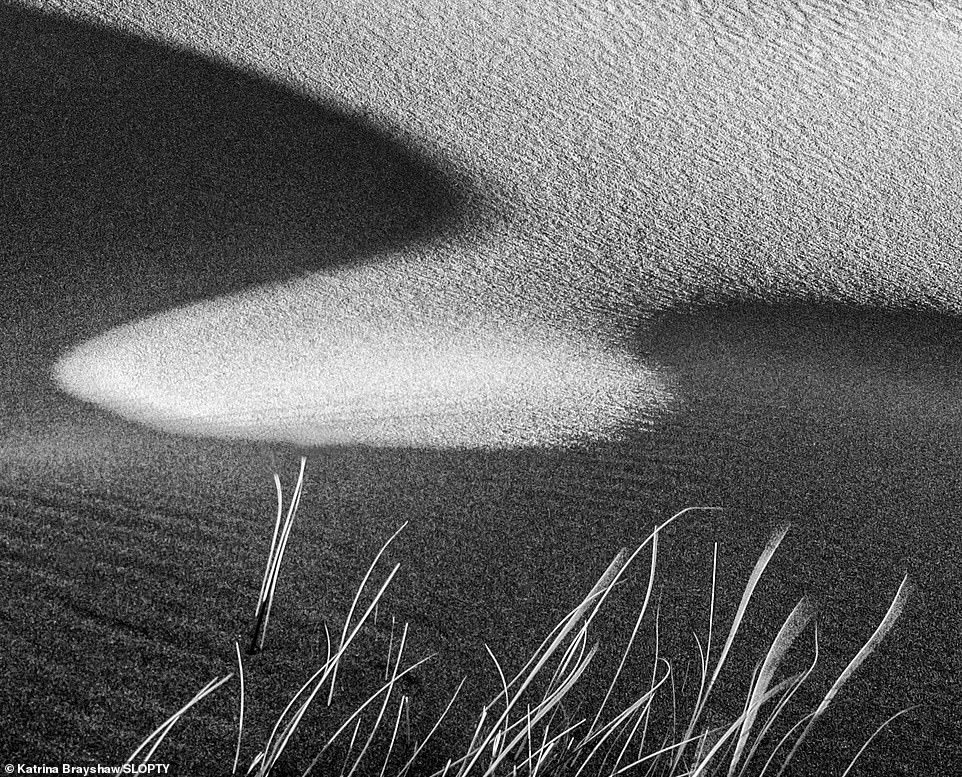 The winner of the monochrome category was Katrina Brayshaw, who snapped this image in the sand dunes of Gairloch 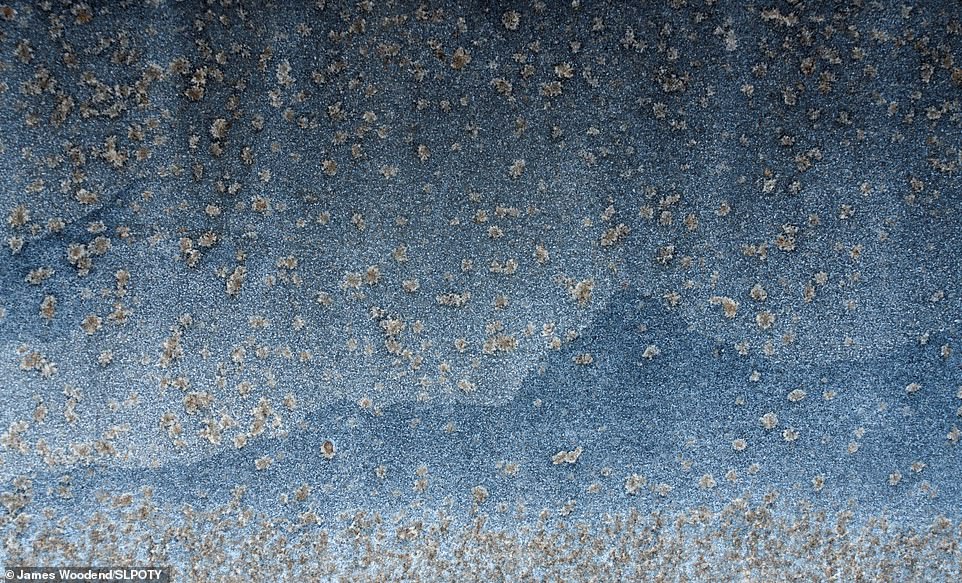 James Woodend was runner-up in the Your Vision category after snapping this very unusual image of a close up a steel barrier on the Isle of Harris. He said: ‘It triggered my interest because, like many macro shots of man made structures, it strangely echoes the natural environment in which they are found’

He started the contest to promote conservation, to inspire photographers of all levels to explore Scotland’s stunning landscapes and to promote Scotland’s natural, cultural and historic heritage to an international audience.

Stuart said: ‘This year, photographers from across the globe entered the competition and once again the standard just keeps getting better and better.

‘In these difficult times ahead of us, we hope these stunning images will bring a little joy to everyone.’

All the winning images will be showcased in a limited edition yearbook, which will be available from next month. 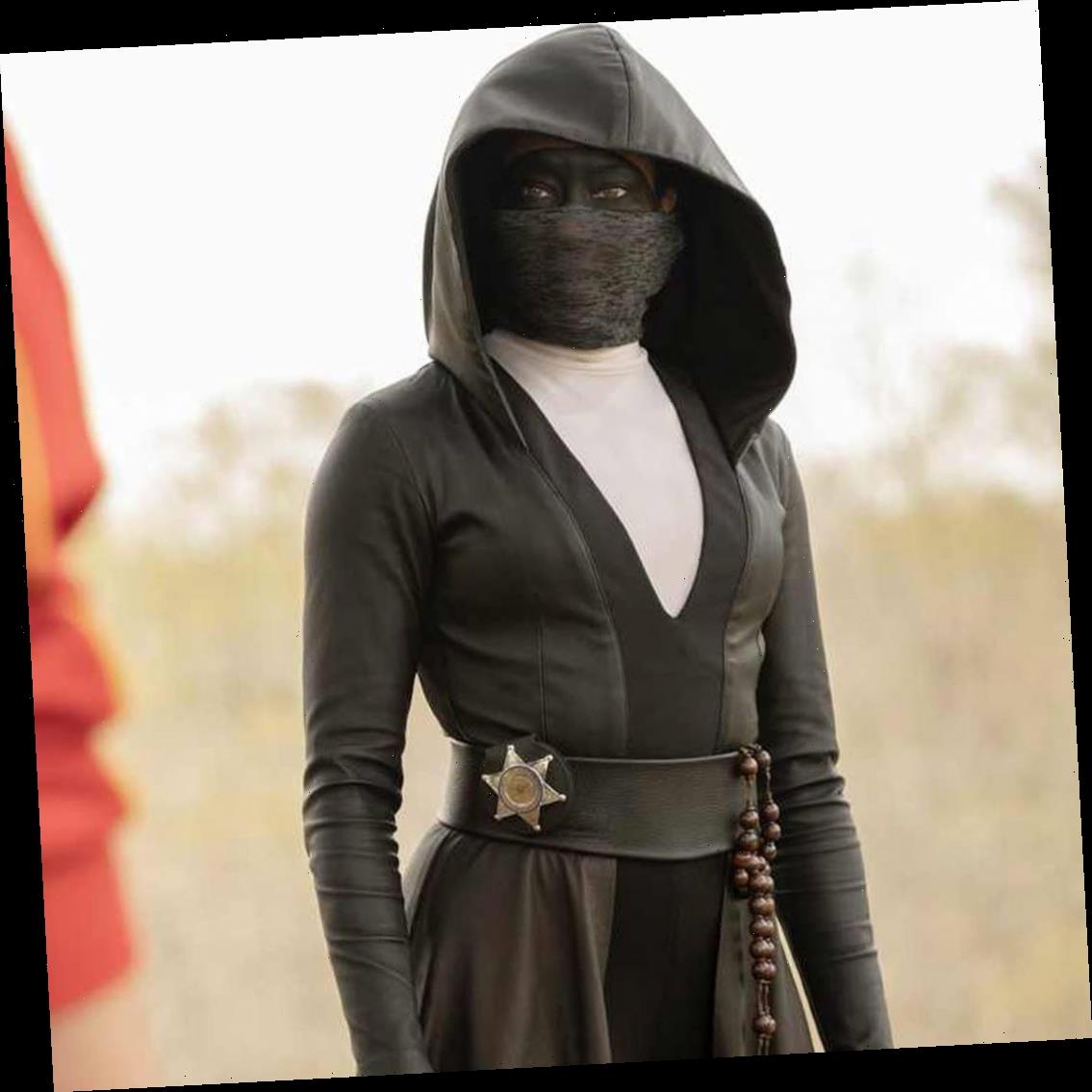