A PLANE passenger was left horrified after spotting a stranger's dirty feet on her headrest.

The rude passenger put his feet just above her head during the flight. 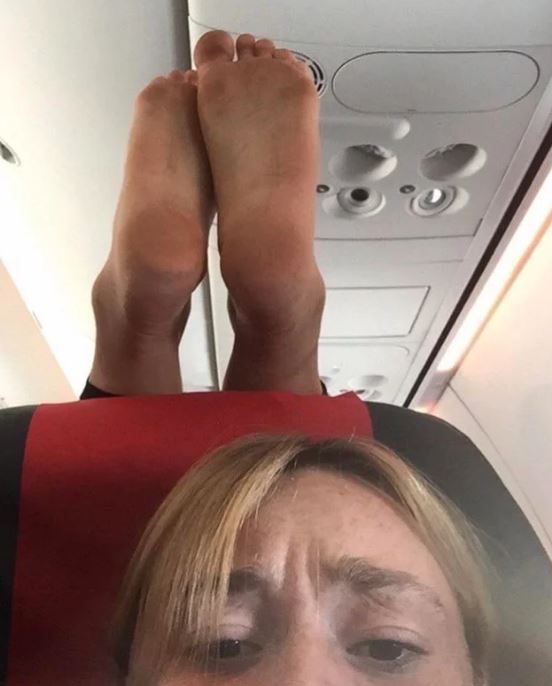 The image, posted on a forum on Reddit, shows a woman frowning at the camera.

Behind her are two bare feet looking dirty, slightly crossed as they rest on her head rest.

The picture is captioned: "This is the one thing I am most worried about before getting on a plane."

It isn't clear who the person is in the picture.

However, the picture has had nearly 1,000 comments, in agreement that it was disgusting.

One person wrote: "I think we should just ban other passengers."

Another added: "Ew those are some dirty ass feet."

One asked: "That is so wrong and I’m not sure how it can be comfortable for the person doing it??"

Many had their own ideas to stop it, such as "sneezing on their feet" or "poking very firmly".

Others said she should have told the passenger instead of posting online.

One person said: "Just get up and tell them to stop and if they don’t listen tell a flight attendant."

Someone had their own story: "I was on a six hour, overnight flight a couple months ago, someone up ahead was doing that. It was shut down by a flight attendant pretty quickly."

The countries you need a Covid booster jab to enter

It is hardly the first time bare feet have been spotted on a plane – a woman was caught putting her bare foot on the armrest of the seat in front of her.

A woman divided social media after putting her feet in a makeshift hammock to sleep on the plane with some calling it "genius".

One man decided to use his bare toe to flick through his in-flight entertainment system.