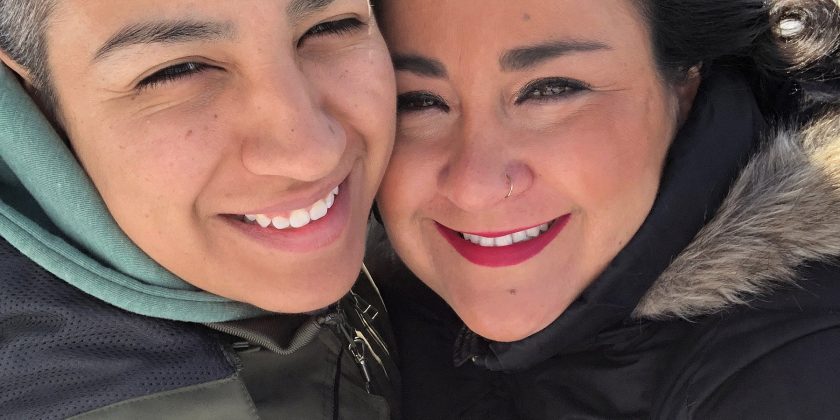 After attending a conference in Detroit, a couple headed to the airport to return home to Los Angeles, but the trip took a nightmare turn.

When Socorro Garcia and Melissa Elmira Yingst, who are both deaf, arrived at the Delta check-in counter on Sunday, they asked to be seated together, and the desk agent said the gate agent would handle it, the couple explained in a video posted to Facebook.

But when they arrived to the gate, Garcia recalled in the clip, the employee did not comply with their request. Yingst allegedly explained the situation to the employee by writing her a message on her iPhone, and the agent responded by rolling her eyes, said Garcia, who is the founder of advocacy group Alma de Muxeristas.

At that point, Yingst asked the employee to write down what was wrong, and she initially refused before eventually writing that the flight was full and she couldn’t change their seats, the video alleges.

“I wanted to continue to communicate and decided to try and write on that same paper, but instead of giving us the paper we asked for, she crumbled it in front of us and threw it in the trash,” Garcia said.

A representative for the airline told PEOPLE that the employee initially tried to communicate with Garcia and Yingst with the Notepad app and by writing on paper, which she threw away because she allegedly believed the interaction was over.

Yingst, who is a news anchor for DPAN.TV (the sign language channel) and an advocate for the hearing impaired, added: “I pulled out my notepad at that moment and wrote on paper saying that she was denying us our communication access and asked for her name, but she refused. I decided to look close on her badge and found her name was Felicia … Again, I kept asking repeatedly to please write on paper with us.”

Then, things escalated. Garcia claimed in the video that she tried to reach into the trash can for the piece of paper, but the woman pushed her away.

The Delta rep states, after stepping behind the podium, a member of the couple pushed the agent out of the way. Another airline employee allegedly witnessed this. Garcia and Yingst both deny that they attempted physical contact with the employee.

Next, Yingst and the employee both began recording the interaction, which shows Garcia signing, apparently asking for pen and paper to write.

“You want me to call the police?” the employee responded, adding, “You can’t come back here, no more talking.”

According Yingst’s video, the police then arrived, and the employee allegedly told authorities that Garcia assaulted her. Then, Garcia said she explained the situation to the police, who told the couple that the best option was to book another flight back to L.A.

Yingst then concluded that it was difficult for them to understand everything that happened, but she said what she does know for sure is that, “Felicia told them that Socorro assaulted her and we could not get on the flight, period.”

She added: “This really isn’t about us not being able to sit together but how they handled communication and refused to provide us access to the needs we asked for.”

An official statement from the airline reads, “Delta is in contact with two customers who reported having difficulty communicating with a gate agent prior to their flight. We are reviewing the situation with our Detroit team and will work with these customers to better understand what transpired. We take situations like these very seriously and as part of our culture of continuous improvement, we are using this as an opportunity to learn and improve.”

At the time of the video, the couple was staying at hotel in Detroit trying to figure out next steps, they said. According to the Detroit Free-Press, they booked a flight and returned home Monday.

When she started the video, Yingst explained that she was still feeling “raw.”

“Even though I have seen this many times, it was a huge shock when it happened to us tonight,” Garcia said of the encounter. “I know no one is immune to communication barriers and this kind of situation, so I felt the need to share our experience. The feeling of being oppressed is very traumatic.”

PEOPLE has also learned from Delta that the couples’ tickets have been refunded, and that the airline is trying to reimburse them for the additional expenses the situation necessitated.

Garcia and Yingst have denied that they’ve received reimbursement, adding that they’d also like Delta employees involved in the incident to participate in sensitivity training.