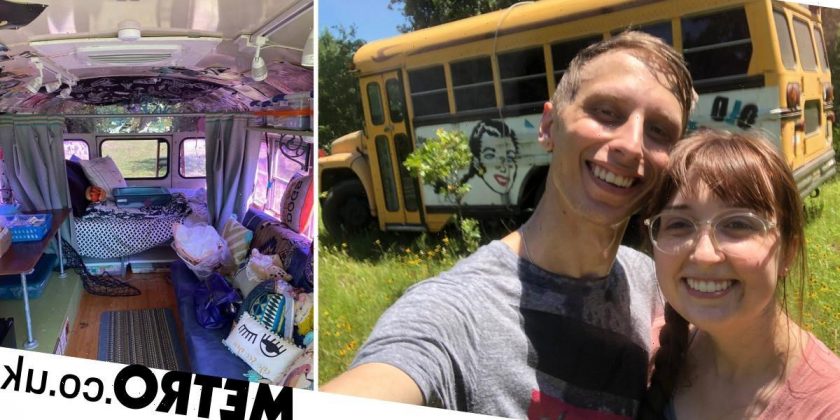 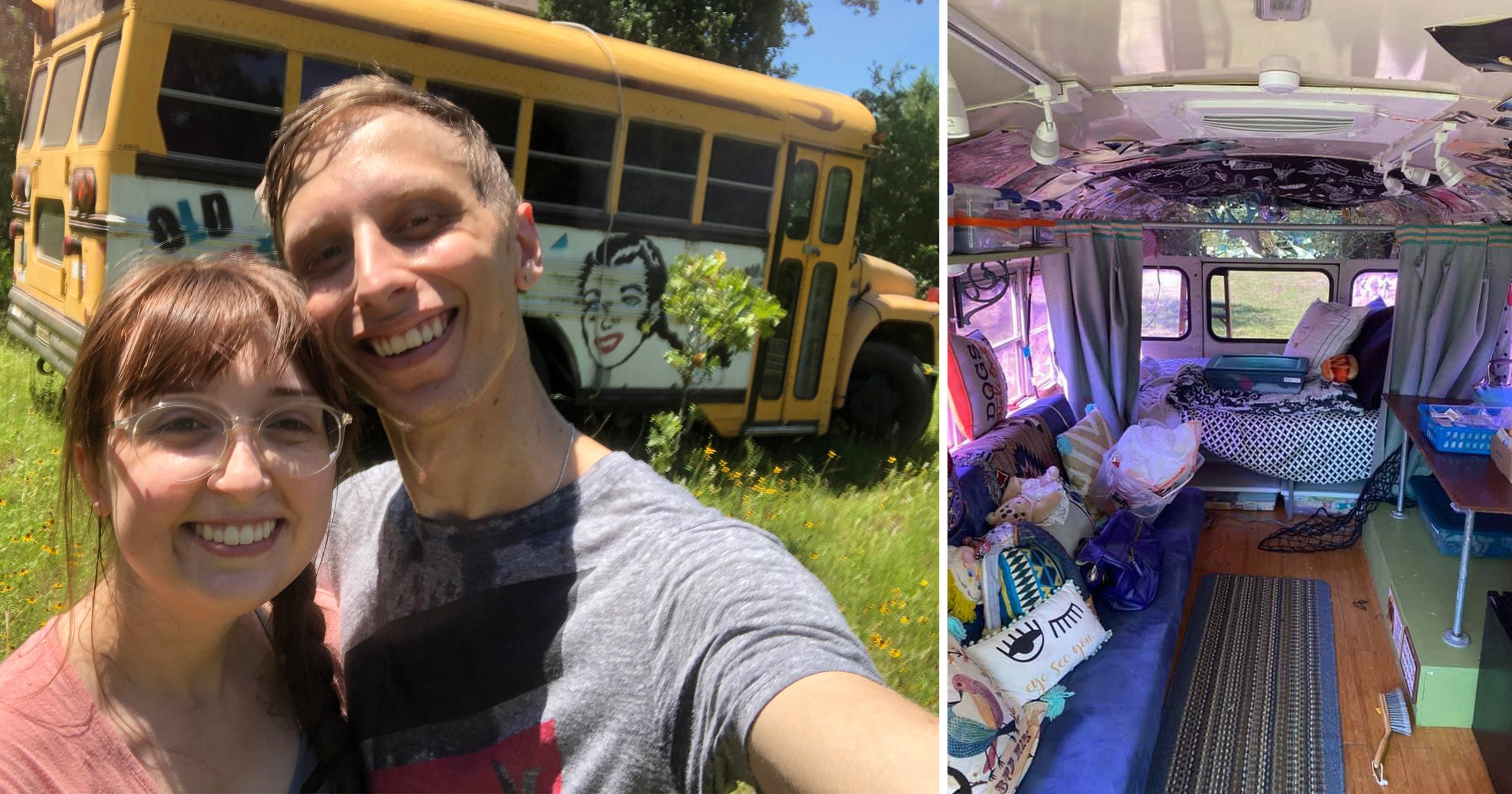 A US couple who were forced to put their Italian travel plans on hold, due to Covid, now live in a converted school bus on the open road.

The Texas couple formerly rented a two-bedroom flat for $1,700 a month, but after Colleen was accepted to study fashion in Florence, the pair quit their jobs and sold their belongings to move across the pond.

However, then the pandemic struck.

With no house or income, Colleen and Bailey decided to move into a van they had bought in 2018 for $6,000 – and realised it could work as an alternative travel plan.

The pair got stuck in transforming the bus into their dream home on wheels.

Colleen told Jam Press: ‘When we first bought Gussie, we had no plans of road-tripping in her.

‘But after my dad died of alcoholism when I was 21, it gave us a lot of perspective.

‘It made us both realise life truly is short and if you want something, go get it.

‘We resolved to the idea that it was never not going to be scary to quit our jobs, leave our home and travel full-time – so we decided we should just do it scared.’

The pair have found ways to avoid huge costs, but still live comfortably.

Colleen says: ‘The woman who owned Gussie specialised in 60s and 70s vintage and drove it to different festivals, so thankfully the flooring was already done and the seats had been removed when we got her.

‘We took out most of the piping that she had used as clothing racks but we also repurposed some of it to hold our tables up.

‘Anything that was electrical or mechanical we hired professionals to do because we are smart enough to know when we are dumb enough not to know.

‘The main goal with Gussie is that we still wanted her to look and feel like a school bus, not one of those all-white, walk-in shower Instagram beauties.’

Gussie now features a bed, camping toilet, a table, futon, solar bank panel and several storage areas for food, water and clothing, as well as both an electric and butane burner for cooking.

On a typical day, the couple will wake up early and grab a coffee, then will run through a ‘checklist’ to get the bus ready.

Colleen said: ‘We check all of our fluids and our tires every morning before we get started.

‘Some days we will stop for breakfast, especially if we have somewhere we have a recommendation for, and then we’ll drive for a few hours and aim to stop for lunch at a park or cemetery we have on our itinerary – but we usually make lunch ourselves.

‘After lunch, we will get back to driving until we arrive at a destination we want to explore.

‘After sunset, we make dinner and settle in for a movie on our portable DVD player or some card games before bed.’

So far, the couple have travelled to west Texas, New Mexico and east California, as well as Phoenix (Arizona), Las Vegas and Tonopah (Nevada) and the Grand Canyon.

They eventually plan to visit all 50 states and hope to buy a house with some land in the future.

Colleen said: ‘Life on the road is a lot of fun and often goes according to plan.

‘At the same time, it is a lot of unexpected stops and it’s a lot of missed turns.

‘When things don’t go according to plan it’s a lovely reminder that life is just a ride we are along for.’