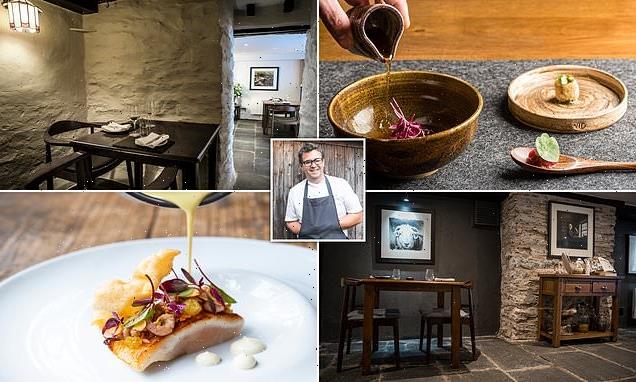 Dance anthems on the kitchen stereo – and no angry shouting: Chef Ryan Blackburn lifts the lid on running ‘the world’s best restaurant’ (and the not-so-fancy dinners he cooks at home) 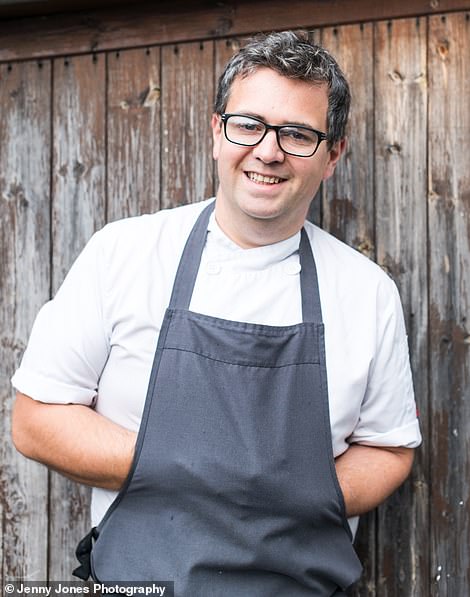 The world’s best restaurant, according to Tripadvisor, isn’t on a glitzy street in London, Rome, Paris or Manhattan, but in the quaint, often rain-soaked town of Ambleside in the north of England’s Lake District, housed in the building poet William Wordsworth used to run his stamp distribution business.

In a nod to its origins, it’s called the Old Stamp House, and was the overall global winner of Tripadvisor’s 2022 Travellers’ Choice ‘Best of the Best’ Restaurants Awards. And it won the previous year, too. The eatery also boasts a coveted Michelin star. So what makes this universally lauded restaurant tick?

MailOnline Travel had a chat with Chef Patron Ryan Blackburn over Zoom to find out, discovering that instructions being barked in the kitchen is not part of the formula, but playing good music – and true-crime podcasts – is.

Cumbrian-born Ryan reveals: ‘The [atmosphere] in the kitchen, where I work with three exceptional chefs, is best described as weird. Sometimes it’ll be like there’s a rave going on in there. I have a speaker system in there and we always have stuff on. So some nights, like Friday night, we might have dance anthems and it’s going off. On Saturday mornings, we have “true crime mornings” where we’ll listen to a true-crime podcast and everyone focuses while they hear about a bizarre story from Australia or America. 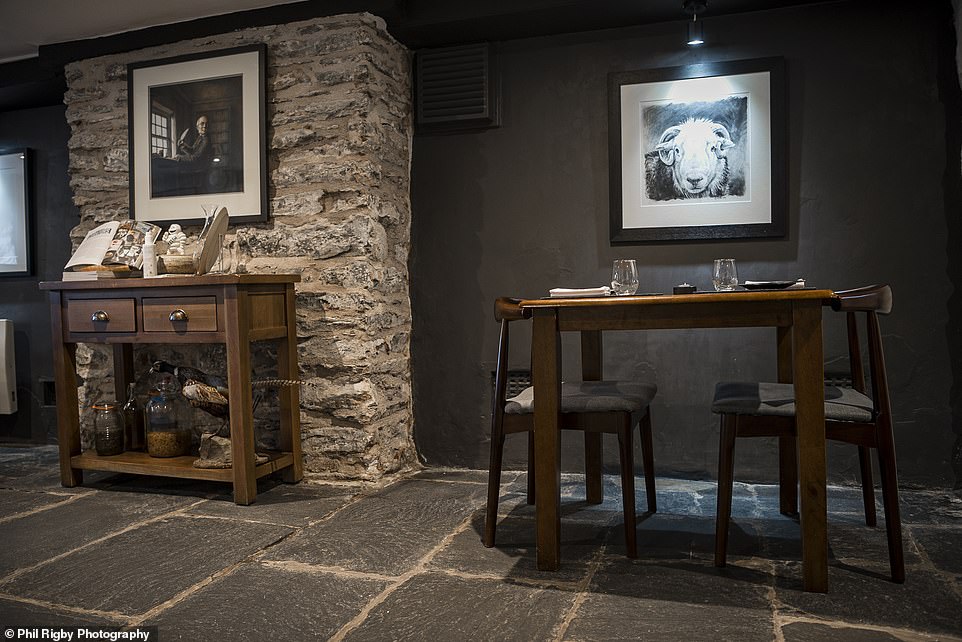 The Old Stamp House (above) was the overall global winner of Tripadvisor’s 2022 Travellers’ Choice ‘Best of the Best’ Restaurants Awards . And it won the previous year, too. The eatery also boasts a coveted Michelin star 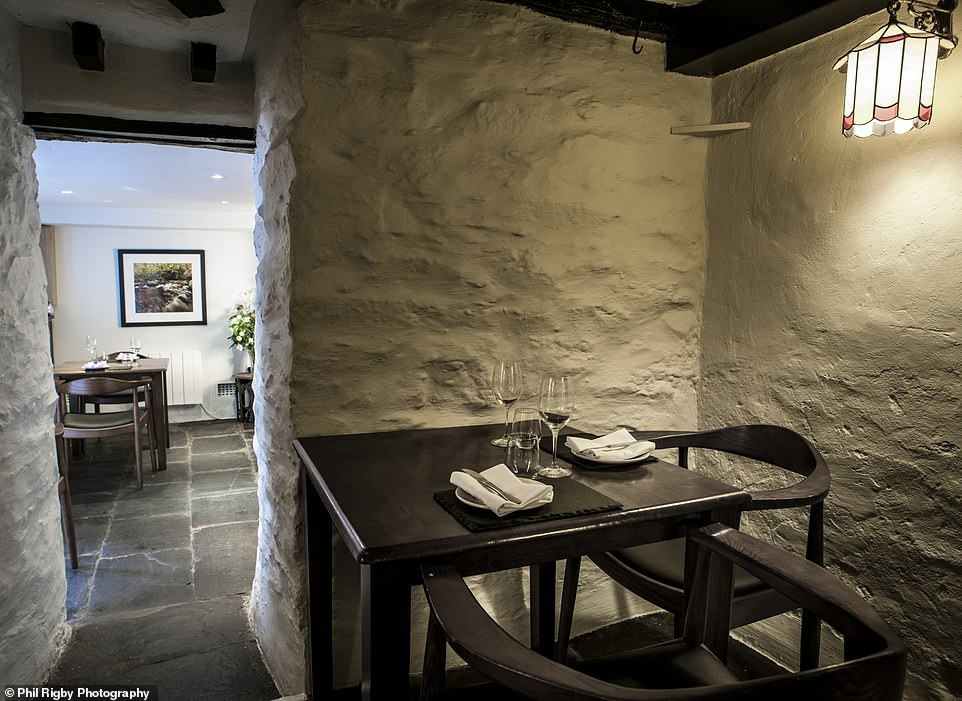 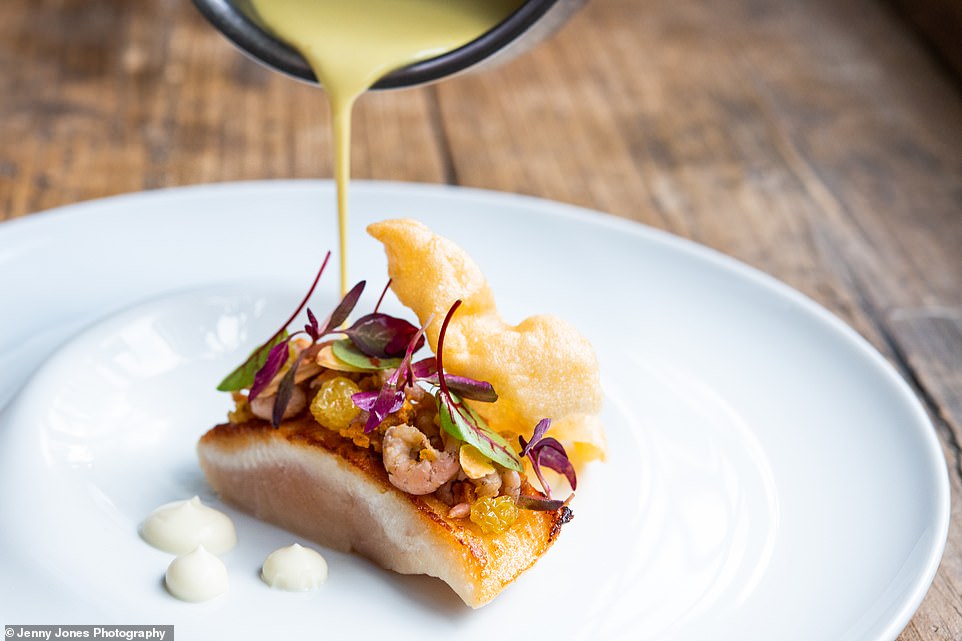 Ryan is a believer in taking plenty of time off – ‘holidays give you time to reflect and think about what you’re doing’. Pictured above is an ‘Arctic char with potted shrimp’ dish served at the Old Stamp House

‘The best thing about Tripadvisor is how it helps new businesses. For example, there’s a fantastic little Mexican [Tacos del Sol] in Ambleside that’s just opened up. It’s a really small takeaway, a husband and wife team – she’s from Mexico – and the cooking is absolutely superb. They’re in the backstreet just next to my other restaurant, Kysty. Thanks to Tripadvisor people are learning about it. That’s the real benefit of Tripadvisor, how it helps these people get started. That’s how Tripadvisor works best. It lets you know about hidden gems.’

‘I learned a long time ago that if you start shouting and getting angry with people it doesn’t tend to get better. It tends to get a bit worse. Sometimes you have to raise your voice to make a point, but I haven’t done that in a long time.

‘At the moment it’s very pleasant because I have such a good team. We don’t take ourselves too seriously.’

The father of two also stresses the importance of downtime.

‘I give myself a lot of holidays,’ says Ryan, who launched Old Stamp House in 2014 with his brother, Craig, who has the role of restaurant manager. ‘I give myself lots of breathing space. Which is quite unusual in hospitality.’

All staff holidays are taken during the main school holidays, which means the restaurant closes for a short period, and is normally shut during half-terms.

Ryan continues: ‘We’ll have time off in February, October, Easter, May and then a good break in the summer. It gives you time to reflect and think about what you’re doing, which is important.

‘I think sometimes it is a common mistake in our industry that we overwork ourselves. You can take yourself down a route where you work so hard you can’t think clearly.’

Does he cook while on holiday, or read about cooking?

Ryan, who has two young boys, reveals: ‘No, I don’t read about cooking and I don’t watch cookery programmes, either.

‘I find creatively that what helps is walking around and visiting places. So on Sunday my family and I are going up to the north of Scotland to a little lodge on a farm we own. We’ll just relax with the kids and chill out.

‘We’re not far from Cullen so we’ll go and eat Cullen skink [a fish and potato soup]. We’ll see what’s growing and I’ll just think about and reflect on what we’re doing at the restaurant.

‘When I was [the head chef] at Cottage in the Wood [in the Whinlatter Forest above Keswick] I used to walk through the woods [on my break] and pick wild herbs and mushrooms and it was that thinking-time that helped me develop my signature dishes.’

Ryan encourages his staff, however, to switch off outside the restaurant and runs a four-day week to give them three clear days of not thinking about cooking.

He says: ‘They’re four very intense days – 9am till 11pm – but then the staff don’t come to work or hear anything about work. It doesn’t exist for three days.’ 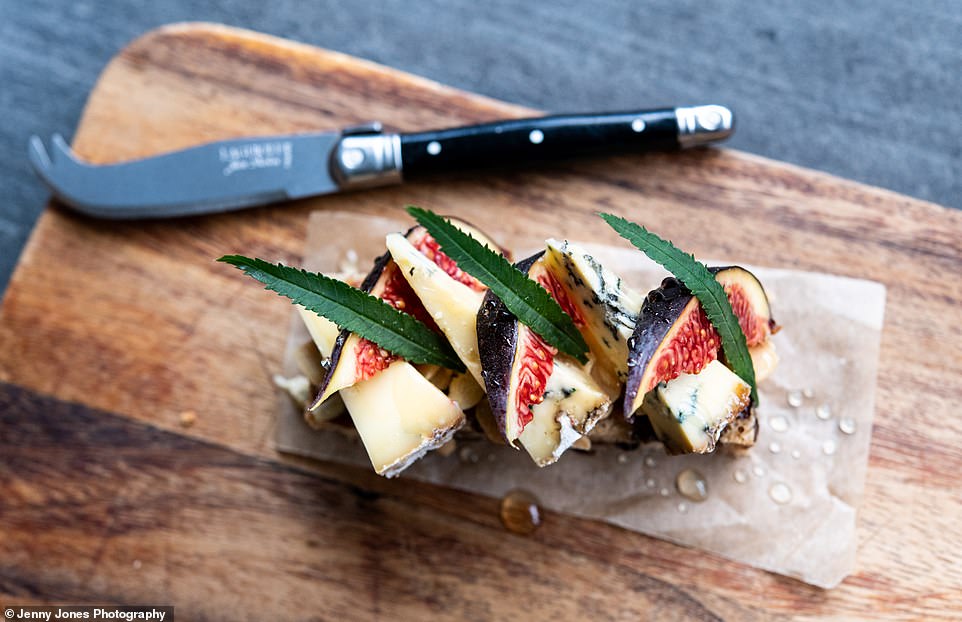 Shouting at his chefs isn’t Ryan’s modus operandi. He says: ‘I learned a long time ago that if you start shouting and getting angry with people it doesn’t tend to get better. It tends to get a bit worse.’ Above is Ryan’s Westmorland Pepper Bread with honey, figs and Blue Winnow cheese by Thornby Moor Dairy 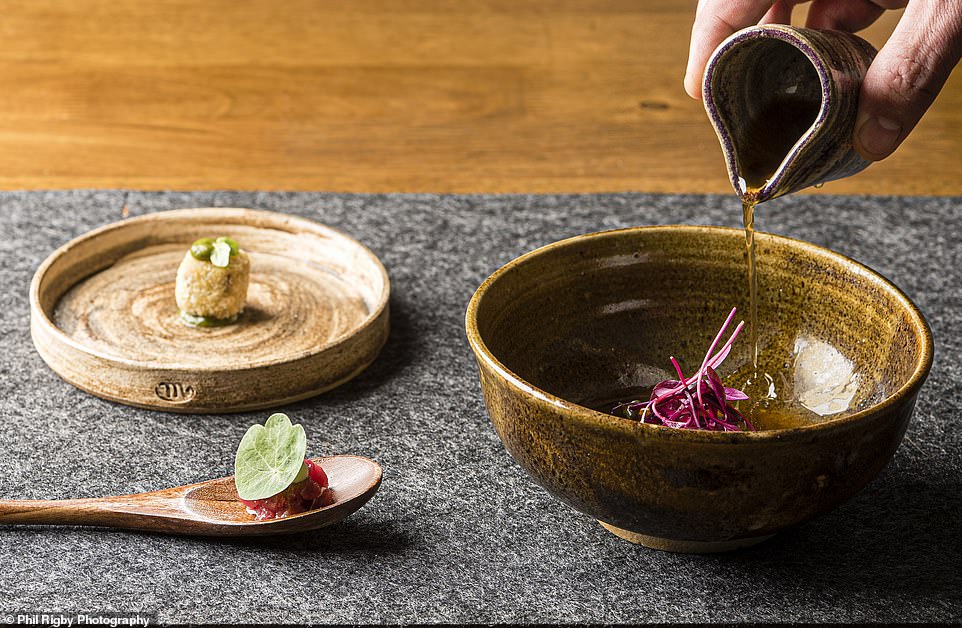 Ryan reveals that at home two things that he always wants in his house is a tube of garlic puree, and mild chorizo. His favourite dishes to cook at home include pasta with a tomato sauce, and paella. Above is an Old Stamp House dish – Yew Tree Farm Herdwick hogget, braised shoulder, peas, scrumpet mint and anchovy, and tartare of loin

RYAN BLACKBURN ON THE IMPORTANCE OF WINE

‘We put all staff members through WSET (Wine & Spirit Education Trust) Level 2. Even a kitchen porter will get put through this wine course. So by the end of this year hopefully every member of staff will be a qualified sommelier! I think it’s a great course. It teaches you about travel, about food and wine pairings. It broadens up the mind on customer experience.’

Ryan’s kitchen and downtime philosophies are clearly helping to pay dividends. And not only at Old Stamp House. He operates a ‘casual’ version of the restaurant in Ambleside called Kysty, which has also been garnering plaudits. This year in the Tripadvisor awards it was named fifth-best date-night eatery in the UK.

Of course, raw talent must also be involved. And there’s an abundance of that.

The obvious major driving force is Ryan’s ability as a chef, but he humbly turns the spotlight on his team when the subject of awards comes up.

He says: ‘The key to the success is the staff. I have wonderful staff at both restaurants. The teams we have in place right now are superb. That’s why the restaurants are as good as they are.

‘I’m the creative part of it. I point them in the right direction. But it’s staff that have created something special.’

In Old Stamp House, the team has created a restaurant with an astonishing percentage of ‘excellent’ reviews – 1,325 out of 1,468.

Ryan explains that he takes feedback ‘very, very seriously’ and is visibly pained when he describes a recent couple who didn’t confirm their booking and couldn’t be reached – leading the restaurant to think they wouldn’t turn up – then arrived 20 minutes early, ‘catching us off guard’.

One of the customers couldn’t eat shellfish – and the restaurant couldn’t accommodate his allergy as it hadn’t had any warning and only serves a set tasting menu.

The pair felt so put out that they left the restaurant.

‘The last thing we wanted to do was have somebody come to the restaurant and get so upset,’ says Ryan. ‘We would do everything for that not to happen.’

The £95-per-head tasting menu currently on offer is described as ‘A Journey Around Cumbria’, and includes ‘black pudding bon bon’, Arctic char, roasted cod loin, Cumbrian red deer and raspberries and gingerbread, with the simple descriptions belying the artistry involved in each creation. 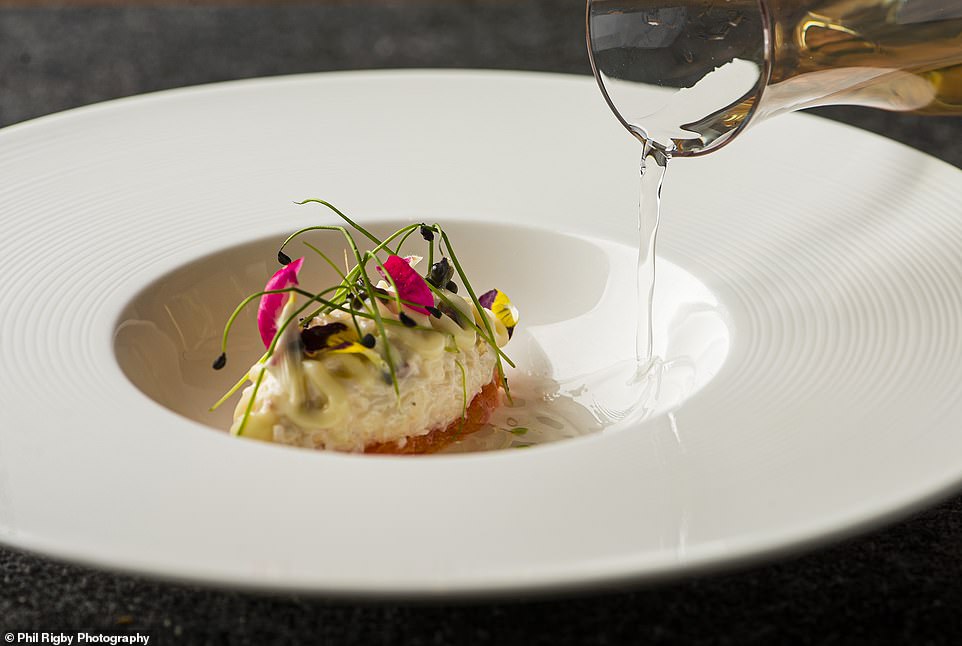 Ryan says: ‘The way I cook and the way I eat are quite far apart. What we do at the restaurant is a treat and I don’t think it should be the norm. It’s an indulgence.’ Above is Ryan’s crab, tomato and wild garlic dish 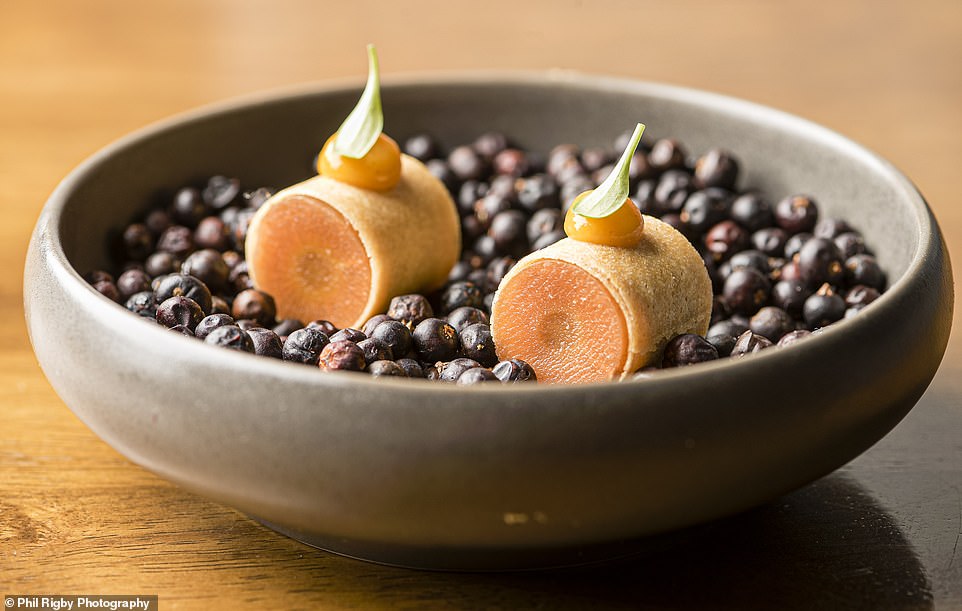 The obvious major driving force behind the success of the Old Stamp House would appear to be Ryan’s ability as a chef, but he humbly turns the spotlight on his team when the subject of awards comes up. He says: ‘The key to the success is the staff.’ Above is a wild rabbit, carrot, coriander and piccalilli snack

In the past, the menu included ‘squirrel doughnut’, which caused something of a stir, as it was made from an actual squirrel.

Ryan explains: ‘It caused a bit of a reaction, which caught me off-guard. I didn’t think it was such a big thing.

‘Basically, what happens is that the National Trust has to manage the squirrel population because we’re trying to promote the red squirrel, so the grey squirrels get killed to manage the land. You can’t trap them and keep them as pets.

‘The game dealer said, “I’ve got all these squirrels in the freezer.” And I thought “they can’t go in the bin, it’s good protein”. Squirrels eat a healthy diet. They eat nuts and good vegetation. We wanted to use them up as a by-product. It wasn’t for schlock value.’

And how were they cooked?

Ryan reveals: ‘We cooked them exactly the same as we cook rabbit. So we slowly cooked them whole and shredded them and put them in a brioche doughnut, finished with some piccalilli and some pickled carrots.’ 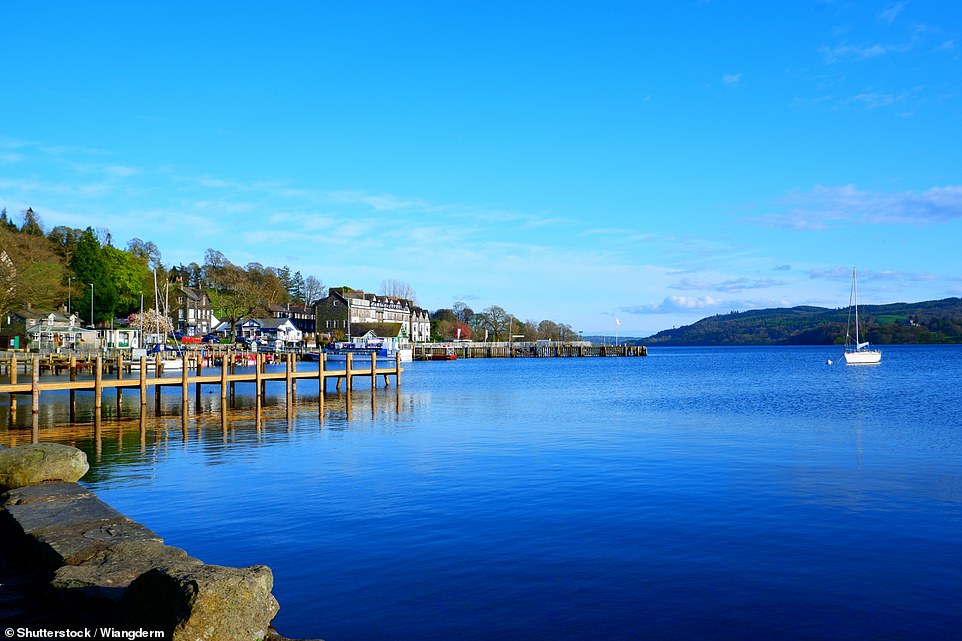 He reveals: ‘Two things that I always want in the house is garlic puree in the green and white tube – I love the stuff – and mild chorizo. And as long as there’s some pasta and rice I can make tea. I always make pasta for the kids [boys aged seven and nine].

‘When I’m on holiday and during lockdown it was different. But on a Monday night, just a really nice pasta with tomatoes and chorizo and a few prawns.

‘I love making paella at home, too. I put loads of veggies in it and chicken.

He doesn’t have butter at home, either.

Ryan continues: ‘It’s always Bertolli [spread] or olive oil. And there’s no double cream. But in my restaurant food I don’t use anything but double cream and butter.

‘The way I cook and the way I eat are quite far apart.

‘What we do at the restaurant is a treat and I don’t think it should be the norm. It’s an indulgence.’

RYAN ON THE VENERATION OF TOP  CHEFS

‘All that I am, and all that my chefs are, are people who are good at what they do. I find the glorification of our industry, and how we have so many award ceremonies, crazy.

‘It’s just a group of people who are really good at their job. The only difference between me and some of the other chefs I trained with when I was younger is that I worked a little bit harder.

‘People who people dry-stone walls in Cumbria are artists. I could stand there for years trying to build a wall like by granddad and I’d never be able to do it. But it’s taken for granted, a little bit. [With chefs] I guess it’s because everybody eats. That’s all I can put it down to.’