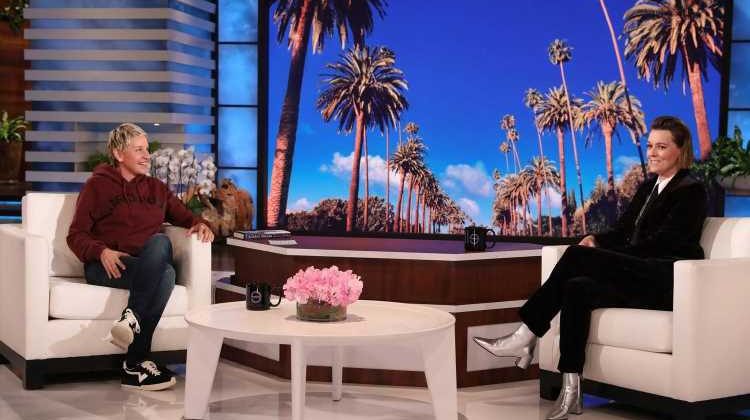 Brandi Carlile is shedding some light on what goes on during those star-studded jam sessions hosted by Joni Mitchell.

Carlile, 39, appeared in-person on The Ellen DeGeneres Show, where she discussed being one of many singers — including Dolly Parton and Chaka Khan — that gathered at Mitchell's home for collaborative singing prior to the COVID-19 pandemic.

And as Carlile revealed, Ellen DeGeneres was also once in attendance at the star-studded gathering. "We took you over there one time," the Grammy winner told DeGeneres, whom she credits for inspiring her to come out at age 15.

"And Harry Styles was there. It was very cool," recalled DeGeneres, 63. "And Chaka Khan was there." Carlile went on to recount DeGeneres' memorable appearance at Mitchell's home, which involved the talk show host being dressed in pajamas.

"You were singing along with Chaka Khan and it was pretty audacious actually," the singer-songwriter said. "I was thinking about it actually because, you may not have been able to grab guitar and sing with Joni but I realized you do something that you could do with Joni, and I think there's a pretty good chance that she could whip you at ping pong. She's really good."

Carlile also confirmed that she and her fellow musicians have plans to resume the jam sessions now that Mitchell, 77, has been vaccinated against COVID-19. "Things are starting to come back and I think it's time to bring the Joni music back," Carlile said. "She's such an inspiring woman and I love her so much."

DeGeneres agreed, adding, "Listen, the coolest thing in the world is to be invited over to Joni Mitchell's house and have musicians jam and you are just sitting in the living room listening to these unbelievable people sing."

Carlile, whose new memoir Broken Horses is out now, previously spoke about the jam sessions at Mitchell's home during an interview with Apple Music's Zane Lowe in May 2020.

"We get people together in the living room and around the instruments and we eat dinner and Joni drinks her Pinot Grigio," Carlile explained. "She likes Santa Margarita Pino Grigio. Headache wine. Yeah, she is a boss. We drink wine and we do music and, man, we had the best one in the plans."