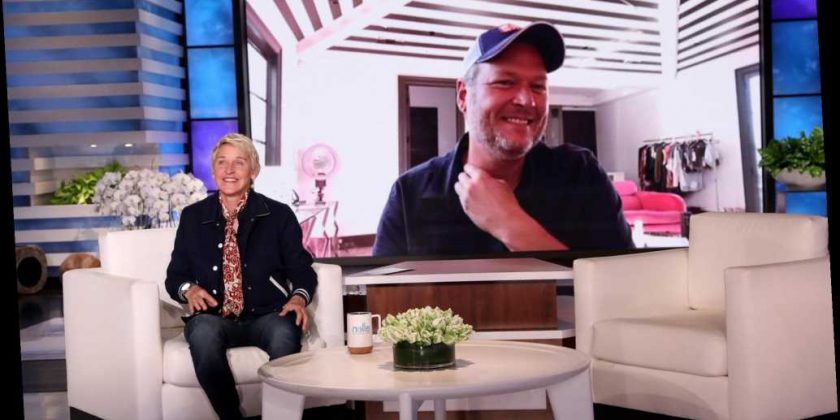 Blake Shelton is sharing why he holds the music video for "Happy Anywhere" close to his heart.

On Monday's episode of The Ellen DeGeneres Show, the country star, 44, opened up about making the music video for his duet with girlfriend Gwen Stefani while "stuck at home" with family during the pandemic.

"Gwen's brother [Todd] was in quarantine with us too in Oklahoma and, I don't know why, over the years I've kinda become a video camera geek, even though I don't even know how to work these things," Shelton said in the virtual interview. "I've got a few cameras that I have no business owning, let's just be honest. But Todd's really good at that stuff."

To make the music video, Shelton said they went through over five years' worth of home videos captured on Stefani's phone, with some new shots captured by Todd.

"He edited that thing and put the video together, and it ends up being maybe my favorite video I've ever had," said Shelton. "It's just so honest and real, you know?"

Later in the talk show appearance, Shelton also addressed his new hairdo at the hands of Stefani during quarantine, admitting he thought the adventurous hair-stylings made him feel younger.

"I didn't care because nobody was gonna see me," he said. "… And I actually really liked it. I would've really liked it better if I hadn't gained 117 lbs. during quarantine. I thought it made me look younger, but I was still just as fat. … I'm not opposed to having her cut my hair again." When the "Happy Anywhere" music video dropped in July, Shelton spoke about why the couple felt it was time to release the romantic collaboration.

"Even though Gwen and I just had a single out, we decided that, under the circumstances, this year … man, there's never been a better time for 'Happy Anywhere,'" Shelton said in a press release at the time.

"We've all been in quarantine and lockdown, and hopefully we've been doing that with somebody that we really love and enjoy being around,” he added. "That's what happened with Gwen and me this summer — and this entire year."

Shelton recently opened up to PEOPLE about his nearly five-year relationship with Stefani, and how they continue to go strong. "An Okie boy and a California girl look, on paper, like an unlikely match, but what matters is she's a great human being," said Shelton. "She is the most understanding, kind-hearted person I've ever met, and I learn something from her every day."

The Voice coaches had been self-isolating at Shelton's cherished Tishomingo ranch during the pandemic, taking advantage of the added uninterrupted quality time.

"The simple pleasure of being together in one place for an extended period of time has been a real gift," he said. "We cook, we clean, we ride four-wheelers and we just enjoy being with each other and with family."

The couple shot the "Happy Anywhere" music video in Oklahoma, with Shelton adding that it's a peek into their everyday life together: "There was a camera shooting the things we do every day. We make biscuits, fish, sing together, spend time with family … just a day in life!"