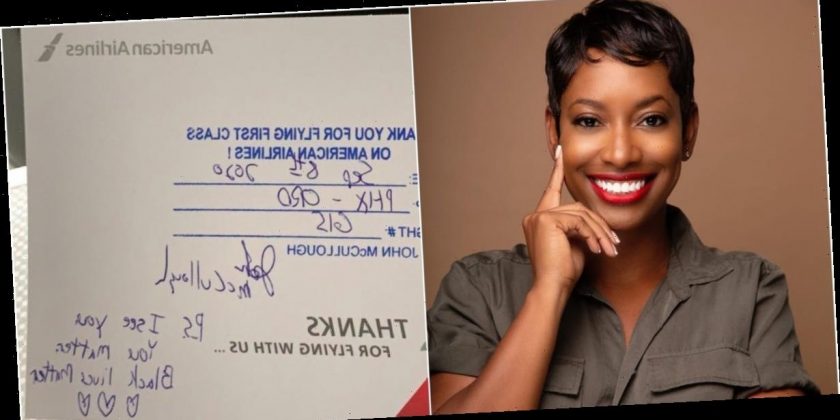 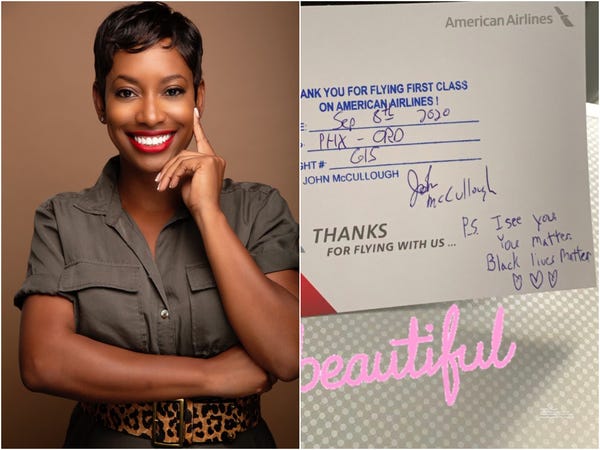 An American Airlines flight attendant has been praised for passing a Black Lives Matter note to a passenger on board one of its flights.

Last week, travel journalist Kellee Edwards was flying first class when she was handed a "meaningful" note from an air steward.

The note, written by flight attendant John McCullough on a generic card for first class passengers, and shared by Ms Edwards on social media, read: "I see you. You matter. Black lives matter."

"Now THIS is customer service," she wrote.

"Such a simple gesture, but BEYOND meaningful. To simply be seen, in today's climate and world. I may or may not be tearing up as a result. Ok, I AM. What an amazing Flight Attendant John is @AmericanAir! Thank you John!"

Mr McCullough later told Good Morning America that he and his colleagues "connected" with Ms Edwards "so I felt comfortable enough to share something more heartfelt than usual on her first class note.

"I immediately knew it was well-received when I saw the happiness in her eyes and the smile behind her mask," he said.

"I'm happy I get to work for a company that connects people and places and I'm beyond proud of American's actions to promote inclusivity."

Ms Edwards has previously spoken about her experiences as a Black traveller.

"In my career and in first class, I'm often the only Black person," she told Good Morning America.

She added that she's been told by more than one member of airline staff that "we're only boarding first class right now," despite holding a first class ticket.

"I get to my seat and I get the look," she said. "As Black people it's like we have to be extraordinary [to be seated in first class]."

Ms Edwards, who is the first Black woman to host a show on the Travel Channel, is also a pilot, podcaster, and adventure travel expert with a particular emphasis on giving back to her community.

She recently took 32 children on their first flight in partnership with Fly Compton.

"Everything I do is with my community at the forefront," she said.

"Encouraging them to step out of their comfort zone, to get up and go."