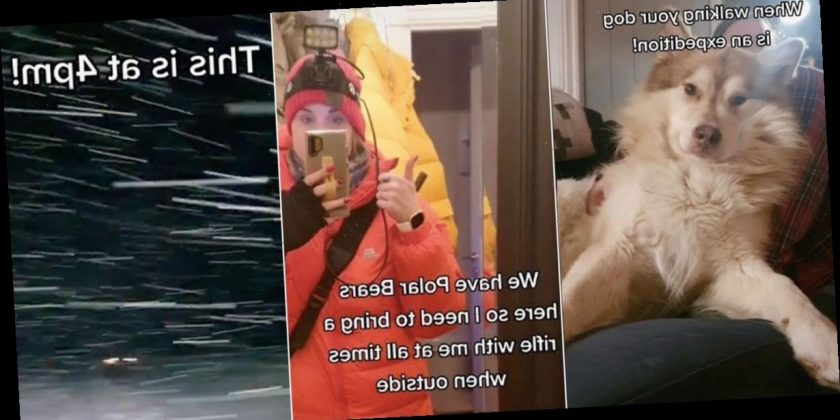 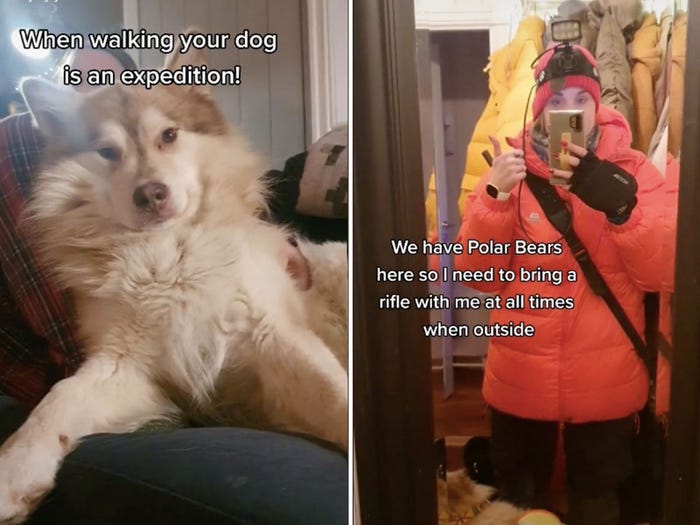 Walking the dog can be such a hassle.

But imagine having to put on multiple North Pole temperature-resistant layers, grab your rifle in case of polar bears, and then brave pitch-black darkness — in the middle of the day.

Such is life in Longyearbyen, Svalbard, the northernmost town in the world. The small Norwegian archipelago of Svalbard sits about halfway between Norway and the North Pole.

Cecilia Blomdahl is originally from Sweden but moved to Svalbard five years ago. While she said in an Instagram post that she was only supposed to stay for a few months, she ended up falling in love with Svalbard and stayed.

She now happily lives in a cabin without running water 15 minutes outside of Longyearbyen, the island's largest settlement.

Blomdahl gets so many questions about what life on the remote island is like that she started making TikToks and YouTube videos about her experiences.

The latest, a simple TikTok on what it's like to walk her dog, aptly titled "When walking your dog is an expedition," has gotten 1.5 million likes.

Accordingly, the video shows Blomdahl getting dressed in three thick layers — thermals, expedition pants, a down jacket — before grabbing a headlamp and a rifle, as polar bears outnumber humans 3,000 to 2,500 on Svalbard.

Since it's so dark on the island, which only has around 40 miles of roads, she has to light her dogs up like Christmas trees with blinking lights and high visibility vests so that she can see them.

She then steps outside into complete darkness — at 4 p.m.

Cecilia Blomdahl did not yet respond to Insider's request for comment.

Svalbard is part of Norway, which is consistently ranked among the happiest countries on Earth according to the annual World Happiness Report.

Norway enforces Svalbard's laws, regulates hunting, fishing, and housing, and is in charge of its infrastructure. However, thanks to the Svalbard Treaty, which was signed into law after WWI, anyone can live and work in Svalbard visa-free, meaning that Svalbard does not adhere to the same rules and regulations as the rest of the Schengen area in Europe.

The Svalbard governor's website says that in order to move there "you must have the means to be able to reside on Svalbard," though it does not specify a minimum amount of savings or income necessary to do so.

The same website also recommends that those planning to move to Svalbard should "obtain work and housing before they arrive," since employment and housing is limited.

Svalbard was first discovered by Willem Barentsz, a Dutchman, in 1596, who named it Spitsbergen, which is Dutch for "sharp mountains,"according to Spitsbergen Svalbard. Until the treaty, which recognizes Norway's sovereignty, was signed in 1920, the islands had no government.

Longyearbyen is the islands' largest settlement, with almost 2,000 residents. Probably thanks to the visa-free situation, Longyearbyen's population is incredibly diverse, representing around 50 different nationalities, according to Visit Svalbard.

Longyearbyen has shops, museums, art galleries, bars, restaurants, a library, and a cinema, and hosts parades and cultural events. However, while a few other settlements exist, roads between them are almost non-existent, and most of Svalbard is wilderness.

While mining and whaling used to be big business in the past, today Svalbard is hoping to become a popular tourist destination, the Financial Times reports.

Currently, Svalbard is not open to visitors from the US.