The elegant trogon, befitting its name, is clever. One can perch in a tree 10 feet overhead and draw little attention, though it’s come dressed for it, with a striking yellow beak, blush red breast topped with a white collar and metallic green back tapering, like tuxedo tails, to finely barred tail feathers.

As a birding fan, I’d made its acquaintance on trips to Mexico. But during the pandemic, in my desire to find unexpected, wondrous and uncrowded places in the United States, I learned that the trogon comes north, often visiting a section of southeast Arizona that looks, from a bird’s point of view, a lot like the highlands of Mexico. 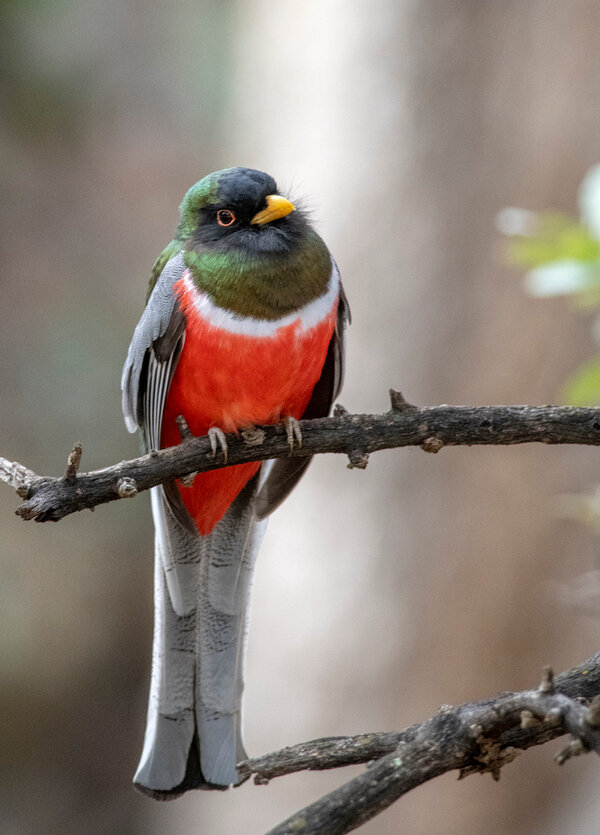 These are “sky islands,” isolated mountain formations separated by seas of desert that are uniquely biodiverse, offering habitats from scrub and grasslands to pine and fir forests as they rise.

Between the Rocky Mountains and Mexico’s Sierra Madre Occidentals lie nearly 60 sky islands, an “archipelago of mountains that are steppingstones between two big ranges,” said Peg Abbott, the owner of Naturalist Journeys, a birding and nature tour operator based in the region. Stretched apart some 15 million years ago and isolated by the development of arid grasslands and deserts between them, about 15 sky islands lie in Arizona’s Coronado National Forest; the rest are in Mexico.

I met Peg on a five-day trip in May to three of Arizona’s sky island ranges — the Santa Rita, Chiricahua and Huachuca mountains — on my first post-vaccination trip, designed to safely spend time hiking outdoors, but squarely in the path of potential encounters with Crayola-colored warblers, up to 15 species of hummingbirds and seasonal guests like the elegant trogon.

From Tucson, I drove roughly 30 miles south to Green Valley and turned southeast for Madera Canyon in the Santa Rita Mountains where more than 250 bird species have been documented. The road ascended from cactus flats to grass and oak savannas into a narrowing canyon, a crease of shady oak and sycamore forest flanking a seasonal stream, bone dry in present drought conditions. At the Santa Rita Lodge in the largely undeveloped canyon, I checked into a creekside casita ($160) and was asked to keep my showers short because of the drought.

But the lack of rainfall hadn’t discouraged the birds, or the birders. On the weaving two-lane road that dead-ends at about 5,400 feet, with footpaths ascending another 4,000 feet to Mount Wrightson, a flock of wild Gould’s turkeys held up traffic. The males, with fully fanned tail feathers, dragged their wings audibly on the pavement. In front of the lodge, more than a dozen feeders were filled with bridled chickadees, cartoonish acorn woodpeckers, thick-billed, black-headed grosbeaks and gregarious pine siskinds.

Hummingbird feeders, filled with sweetened water, were staked closer to the benches facing this bird theater, allowing one woman to train her binoculars on a broad-billed hummingbird just two feet away for a microscopic view of its red beak and darting tongue.

The staffer checking me in said that trogons hadn’t been seen yet this year, but directed me to the Carrie Nation Trail in the morning to look. Meanwhile, she suggested I head across the street at sunset to see the elf owl that burrows in a utility pole there.

“It’s like the littlest dog that has the biggest bark,” said Steve Holt, the lodge owner, speaking of the tiny elf owl that I and a dozen guests gathered to see, settling ultimately for the chirping, whistling and trilling that indicated it was nearby. As they left, one couple asked where they might listen for whiskered screech owls, and motored up the canyon for more night birding.

In the morning cool, the deserted mountain trails were alive with bird song and the brash antics of spotted towhees and yellow-eyed juncos, but no trogon — perhaps, said fellow birders, because of the dry creek.

“In the path of things that move”

Posted outside Cave Creek Ranch in the Chiricahua Mountains, about 150 miles southeast of Tucson, a schedule of the expected arrival dates of migrating and seasonal birds anticipated the elegant trogon on April 6.

“This year, almost everything’s been late,” said Reed Peters, the owner of the 13-cabin retreat where I joined the tour operator Peg Abbott and her group of about a dozen travelers on a nine-day birding trip in the sky islands. They were paging through a binder of listings, checking off the day’s sightings, including the northern beardless tyrannulet and greater pewee.

“Sky islands are a concept of geography that not a lot of people in the U.S. know,” said Peg, explaining the similarities between the Galápagos Islands and the sky islands to the group over drinks. “Part of diversity is how close are you to the big mama ship that has all the species, and part is being in the path of things that move on currents and wind. The principles of island biogeography play out in these sky islands.”

In Arizona, breeding trogons tend to nest in the cavities of big trees like sycamores that grow in riparian zones, which have streams or rivers. Fortunately, the next day, the water was flowing in Cave Creek Canyon, just a few miles beyond the ranch where I joined a loose confederation of birders on a three-hour trek along the road and the South Fork Trail that continues along the creek. Ears trained for the trogon, we delighted in flamboyant warblers and a family of grosbeaks bathing in a rock pool. At an inviting swimming hole known as “The Bathtub,” I heard something between a bark, a gobble and a chortle, possibly a trogon, but I never saw it.

“He likes to hang out there,” confirmed Peg that afternoon as she drove me to the top of the Chiricahuas on a tour that took in campgrounds where visitors erected their own hummingbird feeders, and the Southwestern Research Station, a wilderness campus managed by the American Museum of Natural History in New York City, where scientists have conducted long-term studies on Mexican jay breeding, hummingbird physiology and the social behavior of ants.

As we climbed to 8,500 feet, we left grasslands for oak-and-pine forests and Douglas fir stands, catching red-faced and yellow-rumped warblers amid alligator junipers with coarse, block-patterned bark, and olive and Grace’s warblers near a meadow of lupine and iris.

“They say it’s like driving from Mexico to Canada in an hour,” Peg said.

Because Cave Creek Ranch was sold out, I stayed at Portal Peak Lodge, a weathered motel with an indifferent staff that nevertheless remains the social center of the canyon’s gateway town of Portal, given its restaurant and outdoor patio with a stage for live music (from $85).

Like everything in our current world, the road trip, a classic American experience, has changed.