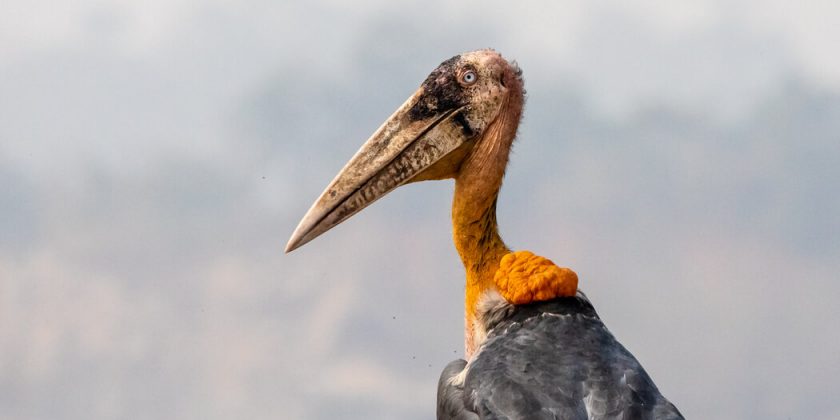 Life can change in an instant, as I experienced when I first laid my eyes on a tall and bizarrely striking bird known as the greater adjutant.

It was India in 2018, in the northeastern state of Assam. I’d ended up there partly because of absurd circumstances, which involved being filmed for a reality television pilot while navigating a motorized rickshaw through the Himalayas. After traversing some of the highest and most dangerous roads in the world, including the Tanglang La mountain pass, I ventured off to see a traditional selection of endangered animals: Asian elephants, greater one-horned rhinos, western hoolock gibbons.

While en route to Guwahati, Assam’s capital, I saw a 5-foot-tall bird towering near the roadside. I was so taken by its appearance that I asked the driver to pull over so I could have a better look. It had piercing blue eyes, an elongated electric-yellow neck, a wobbly, inflatable neck pouch, long legs that moved with a stiff military gait, and spindly black hairs atop its (mostly bald) prehistoric-looking head. Little did I know that this outlandish animal — also endangered, though not famously so — would change the course of my professional life. 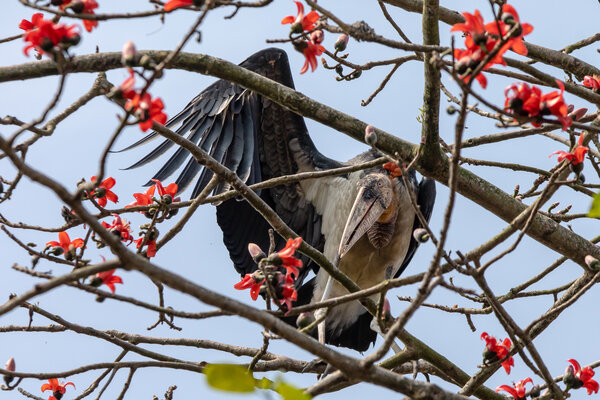 Seeing how intrigued I was by the giant stork, the driver offered to take me to the site of the largest year-round population of greater adjutants in the world.

To my surprise, he led me to the sprawling Boragaon landfill, a dumpsite that borders the Deepor Beel wetland, an ecologically important water storage basin threatened by pollution and encroachment.

As we pulled into the landfill, I felt like I was entering a post-apocalyptic fever dream: Refuse was piled up higher than an East Village tenement building. I saw countless people, including young children, sorting through the garbage with their bare hands. Cows were grazing on medical waste, and feral dogs chased each other through the mountains of trash. All the while, an excavator kept pushing the trash heap taller and taller.

In the middle of this surreal scene, scavenging beside garbage-stained cattle egrets, were the spectacular greater adjutants, who were circling and stiffly marching alongside the other foragers.

After returning from India, I realized that my encounter with the greater adjutants had irrevocably changed me. Until then, I’d doggedly chased a career in New York City as a comedic ventriloquist while juggling mundane day jobs. Wildlife photography was relatively new to me; I had only considered it an enjoyable hobby. But suddenly I wanted to pursue conservation photography with every fiber of my being.

I quickly discovered the work of Dr. Purnima Devi Barman, a wildlife biologist who has dedicated her life to protecting greater adjutants. The founder of the Hargila Army, a local all-female, grass-roots volunteer conservation effort, Dr. Barman led her corps of women in protecting nesting sites, saving fallen baby birds and educating the Assamese community on the importance of these rare and endangered scavengers.

After corresponding with Dr. Barman for several months, I traveled back to Assam in February 2020. Dr. Barman invited me to stay at her home in Guwahati, where she lives with her husband, who is also a wildlife biologist, and her twin teenage daughters.

On our first visit together to the villages of Dadara, Pacharia and Singimari, on the outskirts of Guwahati, Dr. Barman continuously pointed out her car window at “hargilas,” the local word for greater adjutants that is derived from the Sanskrit word for “bone swallower.” I couldn’t believe how many of the birds were peering down at us from their huge nests and soaring on thermals high above our heads — especially since, in 2016, the International Union for Conservation of Nature estimated that only between 800 and 1,200 mature individuals were left in existence, with the population in decline.

Assam is the last stronghold of this endangered species, harboring more than 80 percent of the greater adjutant’s global population. (The remaining population is split between Cambodia and the Indian state of Bihar.)

In the past, Dr. Barman explained, greater adjutants were viewed as unsanitary nuisances and believed to be bad omens, resulting in many of their nesting trees being cut down. Much of the Hargila Army’s efforts are aimed at protecting such trees.

The group’s efforts are also directed at rehabilitating society’s perception of the birds — to “bring the birds into the hearts, minds and cultures of the people,” Dr. Barman said. Conservation work has long been plagued by taxonomic bias, since humans generally favor attractive mammals with forward-facing eyes. “The more people who see hargilas as a bad omen, disease-carrier and pest,” Dr. Barman told me, “the more I am obsessed.”

The work has paid dividends. The greater adjutant’s local population has risen to an estimated 950 birds, up from 400 birds in 2007. The number of nesting colonies in the villages of Dadara, Pacharia and Singimari has also risen during the same interval — to 220 nests, up from 28.

In recent years the Hargila Army has grown to include thousands of pledged members — people who have received some level of conservation training — and around 400 women who are actively involved in leading the movement. Most of its organizers are rural homemakers who are helping to integrate an appreciation for greater adjutants into local traditions. They weave greater adjutant motifs into traditional Assamese textiles and incorporate greater adjutant themes into baby showers.

The most distinctive awareness program I witnessed was at a local wedding that included effigies of the giant bird guarding the entrance and hargila-themed henna drawn on the hands and arms of wedding guests, myself included.

Dr. Barman’s efforts have led to a broader sense of empowerment among the women who make up the Hargila Army. Many receive tools and training — including donated hand looms and sewing machines — that can help them earn additional income.

“It seems like our life has completely changed after integrating hargila motifs into our clothes,” said a member of the Hargila Army named Jonali Rajbongshi, who, after receiving a new sewing machine, began sewing cotton bags embroidered with greater adjutants.

We also visited the house of a woman named Pratibha Malakar, who wove a red-and-white hargila gamosa — a traditional towel-like textile — with transfixing speed and expertise.

Dr. Barman told me that her community conservation model could easily be reproduced in other parts of the world. “Women are the key and the biggest change makers,” she explained. “When we educate women, when we involve women, we achieve a sustainable goal.”

Awareness programs among local schools are another of the group’s tactics, and I went along with Dr. Barman on a few such surprise visits. Her presentations, which include lively discussions, informational pamphlets, educational games and coloring pages, had the students on the edges of their seats.

Near the end of my time in Assam, I accompanied Dr. Barman and her team back to the Boragaon landfill, where she led an outreach program. Children sat among the debris, eating sweets and coloring in drawings of the eccentric storks.

In the middle of her presentation, I looked around to find our corner of the landfill filled with laughter and gaiety. It was an unexpected joyous moment: all of us brought together from such different circumstances by a remarkable woman and an endangered, if often overlooked, scavenger — the unlikely target of a spellbinding and transformative conservation campaign.

Carla Rhodes is a wildlife conservation photographer who lives in the Catskills. You can follow her work on Instagram.