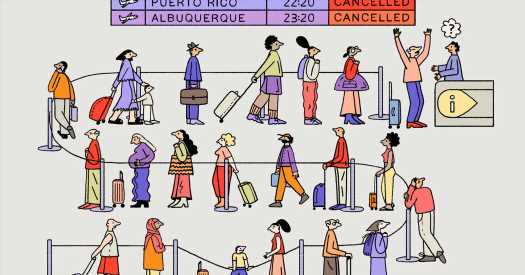 Camille Walker’s troubles with Southwest Airlines began well before her trip to Fort Lauderdale, Fla., in July when her direct flight from Louisville, Ky., was changed to a connecting flight through Atlanta. It became a nightmare when she tried to return from vacation and her departure was pushed back 24 hours. The flight boarded, only to sit on the runway for hours. Assuming she’d miss her connection, Ms. Walker, who works in marketing, found a Delta Air Lines flight she could connect to, but a flight attendant said many passengers were making connections and that the airline would take care of them.

Instead, once she arrived, she said Southwest blamed the weather and disavowed responsibility. Ms. Walker asked to be put on the Delta flight; Southwest refused. When she tried to book it herself, it was sold out. Frantic to get home to attend a friend’s funeral, she tried to book a rental car, but could only find a monthlong rental for $2,000 that had to be returned in Atlanta. She booked an airport hotel. In addition to missing the funeral, the fiasco set her back about $1,000 — for which the airline has offered a $200 flight voucher.

“If you don’t have enough pilots, don’t sell that many flights,” she said.

Ms. Walker is among thousands of passengers who have experienced delayed or canceled flights since June when airlines began to struggle with surging demand, seasonal storms and worker shortages.

In July, according to FlightAware, a flight-tracking platform, airlines canceled up to 3 percent of their flights; the normal figure is less than 1 percent. On-time rates, normally close to 80 percent, fell to between 60 and 70 percent. (Airlines dispute the figures; American, for example, said it canceled about 1.5 percent of its flights in July and its on-time arrivals rate was nearly 77 percent). The statistics are even worse for Spirit, which canceled up to half its departures in early August.

“Demand came back, incredibly fast, and I think a lot of carriers in the U.S. really stretched their capacity,” said Mark Duell, a vice president at FlightAware, which began publishing a Misery Map to show delays and cancellations by airport. The aggressive schedules many airlines proposed left “no slack in the system” to account for events like bad weather, he added.

What’s a flyer to do? There are many booking strategies that help skirt disasters, including flying an airline that has multiple flights a day to your destination, booking a flexible ticket or taking the first flight of the day. The following are some real-life scenarios and what to do if they happen to you.

Request a refund and rebook

Bitsy Kemper, an author in El Dorado Hills, Calif., celebrated her daughter’s college graduation with a recent trip for the two of them to Disney World. On their return to the Orlando airport, they got a text from American Airlines saying that their flight back to Sacramento was canceled; their new flight would leave two days later.

Ms. Kemper’s initial call to customer service was returned 16 hours later. When she asked about compensation, she was referred to the airline’s website. The two spent one night at a friend’s house, and another at an airport Hilton for $174. Both missed days of work.

“I’m in the closet of a business center with the hotel desktop computer and poor lighting trying to access files for a project I was supposed to start,” she said during her delay.

According to the Department of Transportation, passengers are entitled to a refund if the airline cancels a flight or imposes a significant delay, though “significant” is not defined. American said if the delay is because of “irregular operations,” such as weather, customers are eligible for a refund if the delay or rescheduled flight is more than 90 minutes. (Passengers may also request a refund if a schedule change happens at least 72 hours before departure and is four hours or more.)

Look for alternatives, said Gary Leff, who writes the aviation blog View From the Wing. “You may be able to buy a ticket on another airline for less than you expect. Or a modest increment might be worth it.”

Fliers can also ask their airline to put them on another carrier, though this process has been discretionary. If you have to call an airline, try one of its English-speaking foreign offices, like Australia, which may be less busy, by using a free app like Skype.

If you used a credit card with travel insurance benefits to buy your ticket, you may seek reimbursement for expenses incurred during a delay.

Airlines like Spirit, Frontier and Allegiant offer temptingly low fares. But their service may be infrequent, triggering days-long delays when mechanical, staffing or weather issues occur. That was clear with Spirit this month when tens of thousands were stranded at airports, including San Juan and Fort Lauderdale.

In July, Emma Wareus, a graduate student from Pentagon City, Va., and her partner took a trip to Puerto Rico. Scheduled to return home Aug. 1, she was among the many Spirit fliers stranded at an airport during a horrific week when the airline, which was understaffed and hit with weather problems, canceled more than 2,000 flights.

“At some point, flights were just canceled and no one was alerted,” Ms. Wareus said. “We spent close to 10 hours in line and they were still checking people in, which was absurd.”

Ms. Wareus found a hotel and booked an American Airlines flight home, shelling out $1,300 that she doubts she’ll recover.

FlyersRights, a nonprofit that supports passengers’ rights, recommends that passengers, when they write to airlines, copy the Department of Transportation in order to pressure the agency to order adequate reserve equipment and crew minimums and to force airlines to accommodate fliers stranded by other carriers.

“That used to be the rule and now it’s strictly voluntary,” Paul Hudson, the president of FlyersRights, said. “Now most large airlines will not honor the ticket from a low-cost airline when there’s a cancellation.”

In July, when her 8 p.m. flight from Los Angeles to Albuquerque was canceled at 2 a.m. because of a mechanical failure and rescheduled for the following day, Lani Rowe, who works in social media in Taos, N.M., received a hotel voucher. After a $30 taxi ride, she discovered that the hotel did not recognize the voucher and, regardless, was sold out. Back at the airport around 4 a.m., she was told by the airline that she might be reimbursed if she could find a hotel.

“That’s a whole lot of maybes that I don’t want to deal with,” she said, choosing to stay at the airport, where, the next morning, she asked to be put on an American flight to Santa Fe, N.M., close to her home. She was successful.

There’s no guarantee an airline can accommodate a routing change, but a polite, realistic and unemotional request may help. Bonnie Richter, a real estate executive from Detroit, had a tight connection through Amsterdam recently when trying to get home. Rob Stern, a travel agent based in Raleigh, N.C., who runs RobPlansYourTrip.com, and is an acquaintance of Ms. Richter, suggested she use the chat function to talk to the airline about booking a different flight because representatives manning those can handle multiple conversations at once.

Most airlines try to sell you flight insurance whenever you book online, a pressure tactic for a product where the benefits are debatable.

But given the current chaos, now might be the time to consider it. Allianz Travel Insurance said its claims in July were up 75 percent compared to the same period last year.

“There are policies which  have been designed for post-coronavirus travel and can cater for last-minute changes, but it’s really important to read the small print in advance,” Martin Nolan, the global traveler rights expert for Skyscanner, a travel search engine, wrote in an email.

One way to do that is to design your own policy, something the start-up insurer Battleface aims to do with its Discovery Plan, which allows customers to choose what coverage they need rather than buy a prepackaged product that might include things already mandated by the Department of Transportation, like lost baggage compensation.

Berkshire Hathaway Travel Protection offers AirCare, which covers flight delays and cancellations, missed connections, flight disruption and diversion and tarmac delays. Like most policies, pricing depends on many variables, including the number of flights and connections, and can cost $26 for a direct round trip between New York and Orlando or $72 for a round trip between New York and Honolulu with two stops each way. According to the company, sales are up nearly 80 percent in the second quarter compared to the first.

Not everyone agrees flight insurance is necessary. Mollie Fitzgerald, a travel adviser at Frontiers International Travel agency based in Gibsonia, Pa., recommends it for international trips or complicated itineraries.

“If I was just buying a flight to Dallas, I probably wouldn’t buy insurance,” she said, noting the importance of purchasing a flexible fare and relying on credit card benefits to kick in during delays. “If I can retain the value of the ticket and use it for up to a year, it’s not a total loss.”

Negotiate, or hire an advocate

It pays to be persistent, but rewards take time.

In March, Daniel Begemann booked tickets for himself and his fiancé on a Delta flight in August from New York to Manchester, England. Recently, the airline informed him that his destination was changed to London, more than a three-hour train trip from Manchester, where he is moving for graduate school.

He tried to move to a KLM flight, listed on Delta’s website, but was told that because it was operated by KLM he could not be transferred. The new KLM ticket would cost an additional $860.

He then called Delta and spent four days negotiating a solution, which he proposed: taking the flight to London and getting a refund for a Manchester connection on another airline, about $360 in total. Delta agreed.

“My biggest takeaway is if you have the privilege of time, you might be able to get what you need,” Mr. Begemann said.

For those who don’t have the time, a travel agent will book your flight, for a fee, and then track changes and make rebookings. At Frontiers, Ms. Fitzgerald said the booking fee is $35. Many agencies charge fees based on the cost of the overall trip.

But these days, even travel advisers are being put on hold. What used to take 10 minutes, some say, can now take an hour.

In the end, flight uncertainty is forcing some travelers to reconsider travel until air transportation normalizes.

Laura Bussey and her husband, Mark Bussey, retirees in Portland, Ore., booked a fall trip to Portugal to meet their son. After booking, their airline, TAP Air Portugal, changed the itinerary to include a 24-hour layover in San Francisco and a return connection that leaves for Portland before the Lisbon leg arrives in San Francisco.

She had so much trouble reaching TAP that she called Alaska Airlines, the partner carrier handling the domestic flights, only to learn that the TAP flight to Lisbon had been canceled. Ultimately, she canceled the trip.

She fears losing the $2,400 she spent since she cannot reach the airline, though she has requested a refund through her credit card.

“If we stand back and look at why we’re doing this, to have a vacation and enjoy time traveling with our son, we decided we’re unlikely to achieve those goals,” she said.