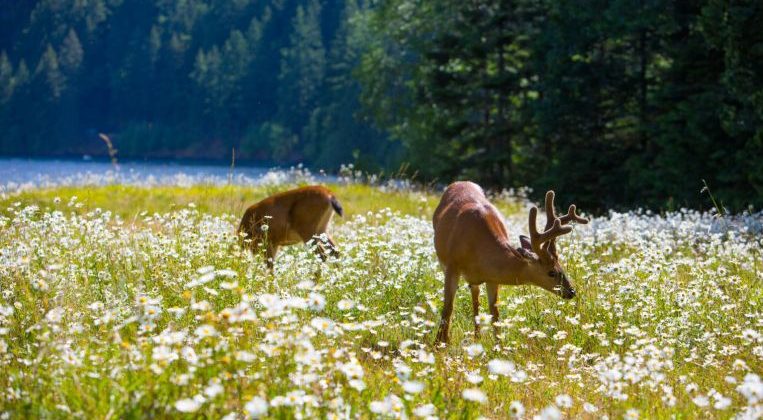 Spring is, arguably, the ideal time to visit the United States. The season brings natural wonder with it, clearing away blankets of thick snow, bringing animals out from hibernation and coaxing flowers into bloom.

Here are some places to enjoy the best that spring has to offer:

You don’t need to be a fan of U2 to want to visit Joshua Tree National Park, an endlessly fascinating national park located just two hours’ drive from Los Angeles.

A desert may seem like a strange place to visit in a season that’s known for bursting with new, verdant life, but one glance at Joshua Tree in the spring will make it abundantly clear why it remains a popular destination for nature enthusiasts.

While the Park is best known for its otherworldly vistas of desolate wasteland, it explodes into a blaze of wild colour when spring arrives. Following the first spring rains, wildflowers sprout uncontrolled across the sand between February to April, ranging from silky white datura, to brilliant orange mariposa lilies, to the shocking pink petals of the beavertail cactus. Hikers will also appreciate the milder temperatures that spring holds, particularly in contrast to the summer heat.

But the skies above Joshua Tree also hold endless wonder. Joshua Tree’s night skies are famously starry, due to minimal light pollution. If you manage to score a coveted campsite during the peak of the spring tourist rush, make sure you bring a good camera and a tripod (and if you have one, a sky tracker) — the pictures you take will be quite literally out of this world.

The United States is full of some truly awe-inspiring sights, like the towering silhouette of El Capitan in Yosemite National Park and the redwood groves of the Pacific Northwest.

But even among these breathtaking vistas, few are quite as awe-inspiring as Niagara Falls. The perfect place for a weekend road trip out of New York, the combined forces of the Horseshoe Falls, American Falls and Bridal Veil Falls have the highest flow rate of any waterfall in North America, with more than 100,000 litres of water pouring over the three falls every second. It’s no wonder that you can hear the roar of the falls long before you see them.

As the valley begins to thaw, the Niagara Glen becomes a viable option for hiking as well. Located deep inside the Niagara Gorge, hikers can make their way through acres of Carolinian forest to lookouts that offer unmatched views of the Niagara Whirlpool and Niagara River.

While the San Francisco Bay Area may be best-known for the glass and steel canyons of Silicon Valley, or the imposing figure of the Golden Gate Bridge, there’s plenty of natural beauty to be found there too.

Muir Woods National Monument lies less than 20km north of San Francisco, and is home to one of the great American natural treasures: the coast redwood. The Woods are one of the last remaining stretches of old-growth redwood forests in the Bay Area, spanning over 240 acres.

Closely related to the giant sequoia of the Sierra Nevada, the coast redwood is similarly famed for its height, with the tallest tree in the Woods standing at a staggering 79m in height. The sheer scale of these ancient trees cannot be adequately described in words; it’s not until one stands beneath a coast redwood that one understands quite how large they can be.

An extensive network of hiking trails sprawls in the shade of the redwoods, making for a cool, leisurely hiking experience, particularly in spring. Plus, the tannin secreted naturally by the redwoods acts as a natural insect repellent — so visitors won’t have to worry about being plagued by mosquitoes on their strolls through the park.

Singapore has its own fair share of rainforests, but the temperate rainforests of the Pacific Northwest are an entirely different beast from our equatorial jungles.

Located just an hour’s drive out of Seattle, Olympic National Park is a wildlife photographer’s dream, especially in spring. The Olympic peninsula is home to one of the largest unmanaged populations of Roosevelt elk in the United States. Spring in the lowlands is also the best time to catch black bears, as they emerge from their habitats after a long winter of hibernation.

Whale-watchers also shouldn’t miss Olympic National Park in the spring; from March to May, more than 20,000 grey whales pass by the Pacific coast on their yearly migrations back to Alaskan waters — sometimes less than 2km from the shore. The truly dedicated can trek or drive the length of the Whale Trail, which offers spectacular viewpoints and useful information on migration patterns.

And speaking of migrations, Olympic National Park also plays host to a great deal of migratory birds from April onwards. All manner of birds pass through the Park, from sharp-shinned hawks to Hudsonian godwits to Caspian terns, making it a godsend for avid birdwatchers.

Thinking of taking a spring trip to the States, but worried about long layovers?

You can leave all those days behind you now, and focus entirely on the destination: by December this year, Singapore Airlines will operate 53 flights per week to the US, with 27 of them being non-stop flights to Los Angeles, San Francisco and New York.

With the introduction of Singapore Airlines’ new non-stop flights to Seattle next year, you’ll be able to take your pick of 57 flights a week.

Plus, it’s the perfect environment to enjoy a long-haul flight. The Airbus A350-900ULR that flies to Los Angeles, San Francisco and New York is fitted with 67 business-class seats and 94 premium economy-class seats, while the A350s that fly to San Francisco and Seattle are fitted with 42 business class, 24 premium economy class and 187 economy class seats. Combined with Singapore Airlines’ award-winning service, it’s a recipe for ultimate luxury.

Looking to put some spring in your step? Visit www.singaporeair.com to get your tickets today.

From now till April 30 next year, take part in the SingaporeAir Games to unlock exclusive promo codes, and stand to win an economy class air ticket to any destination in the featured region of the month — which, this month, happens to be the United States. Plus, the first three players to attain all achievements across six regions will win 80,000 KrisFlyer miles each.