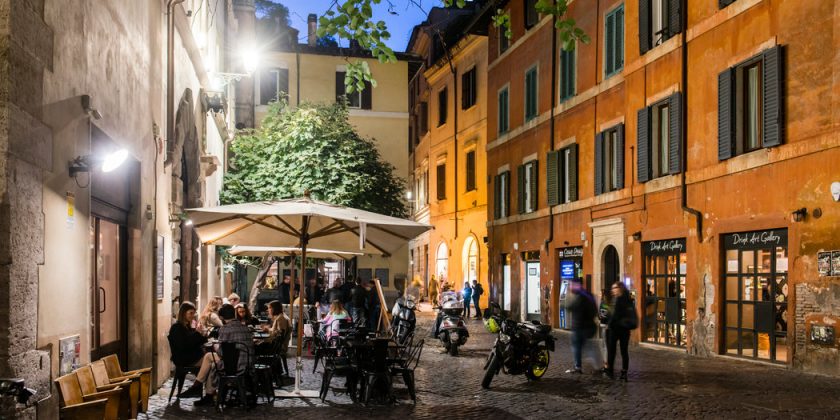 For all its imperial and papal pomp and circumstance, Rome at heart is a beautiful child — raucous, dreamy, secretive, a touch spoiled, by turns exasperating and enchanting. The child is on its best behavior during “le feste” — the winter holidays. High season crowds thin, and dazzling light displays and slanting sunbeams compensate for the short days. Today’s Rome is a paradoxical place: even as many historic neighborhoods fall to mass-touristic homogeneity, outlying districts are becoming more vibrant and varied. For an authentic Roman holiday, get out of the centro storico and sample the pizza stalls of the Testaccio market and the funky wares at the nearby Porta Portese Sunday flea market, the nightclubs of San Lorenzo and Tiburtina, and neighborhood gelaterie like Neve di Latte and La Mucca Bianca. Tranquillity has never been Rome’s strong suit, but with a bit of planning (and flexibility), the Eternal City can be at its most bewitching at the onset of winter. (Though buses and trams crisscross the city, you’ll save time with two easy-to-navigate taxi apps — My Taxi and It Taxi.)

Ai Tre Scalini in Monti (not to be confused with the restaurant of the same name on Piazza Navona) is an informal, century-old neighborhood wine bar where locals rub shoulders comfortably with visitors. Reserve a table online or join the lively crowd at the bar for an Italian draft beer (Bav bitter or Birra del Borgo lager is 6 euros, or about $7) and Calabrese green olives or coppiette di maiale (spicy, oven-dried pork strips).

A 15-minute walk, skirting the crowds that ceaselessly mill around the Colosseum, leads to the Augustinian Basilica of Santi Quattro Coronati, one of Rome’s hidden jewels. Even if you’re not religious, the vespers sung here every evening at 6 offer a meditative bridge to day’s end (and a nice antidote to jet-lag). The nuns’ quavering voices meld perfectly with the serene geometry of the medieval floor and the ancient columns that line the nave. Try to catch a glimpse of the 13th-century cloister, a place of “extraordinary joy.” in the words of the writer Eleanor Clark.

In the heart of Rome, just blocks from the Pantheon, recently opened La Ciambella serves exquisite food in a spare quiet room where you can reliably find a table. Chef Francesca Ciucci alchemizes local ingredients — fermented black garlic, chickpea flour, red Tropea onions — into dishes of exceptional subtlety. The purée of fava beans laced with wilted chicory makes for a green, velvety soup (7 euros) and the braised lamb on a coulee of smoked cream of red peppers (18 euros) is both buttery and lightly piquant. The wine list features Nero d’Avola from small producers like Sicily’s Azienda Gulfi. Save room for feather-light lemon meringue pie.

Walk — or stagger — from La Ciambella through the haunting labyrinth of Renaissance and Baroque Rome to the venerable Bar del Fico, a combination bistro and bar where you can sip a Negroni or mescal infused with ginger beer and chili (12 euros), or knock back a brandy alongside the young Romans who gather here nightly to sip and dance. D.J. sets thump away until 2 a.m. 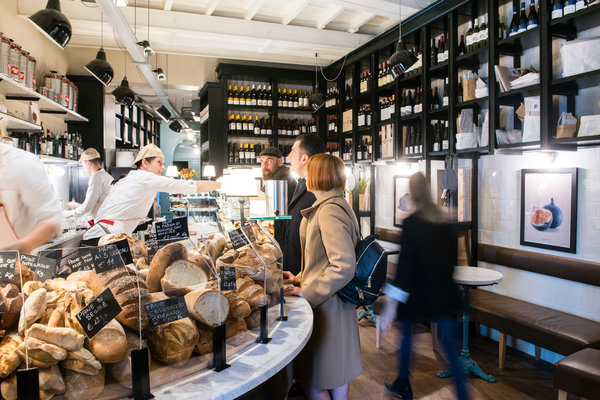 The multibranched Museo Nazionale Romano is still the city’s best kept secret for world class ancient art and architecture. The two branches flanking the Termini Station — the Palazzo Massimo and the Baths of Diocletian — complement each other perfectly. The Massimo’s collection of classical bronzes, mosaics and wall paintings reveal the breadth and finesse of Roman artistry, while the baths complex, once the empire’s largest, surrounds you with soaring masonry ruins, whispering fountains, and an immense cloister attributed to Michelangelo.

A quick bus or cab ride from the museums delivers you to a gem that few Romans, let alone visitors, know about: the Mausoleum of Santa Costanza. Folded into a green hillside that rises above the busy artery of Via Nomentana, the circular templelike tomb of the daughter of Rome’s first Christian emperor preserves a mosaic cycle of astonishing exuberance and delicacy. Save a few minutes before the noon closing time for the seventh-century church of Sant’Agnese Fuori le Mura in the same complex. The teenage martyr venerated here presides over the apse in an austere, Byzantine-style mosaic of elongated figures set against a gold background.

Gustando e Degustando, a 10-minute walk from Santa Costanza, is the hole-in-the-wall you dream of: a handful of tables, a chalkboard of daily specials, oldies burbling in the background, and simple local food of notable freshness. Beef strips on a bed of arugula (8 euros) is both light and flavorful; octopus, pesto and potatoes (10 euros) has a nice balance of succulent and savory. An extensive list of beers, wines and spirits makes this an equally good choice for an afternoon aperitif.

What a stroke of luck that two of Renaissance Rome’s most ravishing streets, Via del Pellegrino and the intersecting Via dei Banchi Vecchi, are lined with some of the city’s most tempting boutiques. From Campo de’ Fiori, pick up Via del Pellegrino and work your way west, stopping at Solodue, for edgy shoes, tops and accessories; Retropose, for oversize bags in eye-popping colors; Sciam, for glass baubles and Murano goblets; Libreria del Viaggiatore for travel books; and Libreria il Minotauro, a warren stuffed with children’s toys and books. Refuel with a coffee and pastry at Monteforte, and continue past the patrician palaces to Banchivecchi Pellami, via dei Banchi Vecchi, 40, a venerable family-run shop offering classic Italian-made belts and wallets.

No one loves a crèche — presepio in Italian — more than the Italians, and at the International Museum of the Presepio you can revel in the finest examples of this folk art from all over the world and down through the ages. Open only on Wednesdays and Saturdays from 5 to 7:30 p.m. (with extended hours from Christmas to Jan. 6), the museum is in the basement of the tiny church of SS. Quirico e Giulitta, at the edge of Monti.

Packed nightly with well-heeled Romans, Ristorante Ottavio is worth the cab ride out to the southern fringe of the Esquiline district for supremely fresh seafood, both raw and cooked, served with low-key elegance and practiced flair. Let your server guide you to house specialties and daily catches, which might include plump shrimp with sweet Trochea onions (38.50 euros), linguine with small octopus, and a lavish platter of boiled lobster studded with potatoes and tomatoes (45 euro).

Brooklyn hipster hang meets London pub at Sazerac, a cozy little neighborhood boîte with a great sound track (from rock to Reggae) just around the corner from Ottavio. Grab a tiny bistro table and settle in with a My Sazerac (cognac, absinthe and Morlacco bitters, 7 euros), a Fog Cutter (rum, cognac, gin and lime, 7 euros) or artisanal beer. For more serious partying and dancing later in the evening, continue on to Circolo degli Illuminati in the Ostiense neighborhood or the recently opened Live Alcazar in Trastevere.

The Janiculum, Rome’s second highest and leafiest hill, has a glorious pedestrian path that rambles past huge sycamore trees, fountains, monuments, statues and stately palaces (many now embassies and academies). Pick up the path at the edge of Vatican City and join Roman families for a leisurely ascent to the Fontanone — literally the Big Fountain — the immense early-17th-century water feature that Paolo Sorrentino used in the opening shots of his film “La Grande Bellezza.”

Some of the same families you encountered on the Janiculum passeggiata may well be lunching beside you at Antico Arco, a sleek, stylish and deliciously adventurous restaurant at the summit of the hill just outside the Porta San Pancrazio. Seared scallops with red pepper and basil (22 euros) makes for a standout starter, and the spaghetti with pecorino and zucchini flowers (16 euros) is a welcome variation on the city’s ubiquitous pasta with cacio e pepe.

Even in winter, a visit to Rome is not complete without a cone or cup of gelato. Romans will argue fiercely that their neighborhood gelateria is the best, but no place has more original flavors than the Fatamorgana chain. Wasabi chocolate; and almond milk, mint and ginseng are just a few of the odder scoops on offer. Luckily, the Trastevere branch is an easy (downhill) walk from the top of the Janiculum. 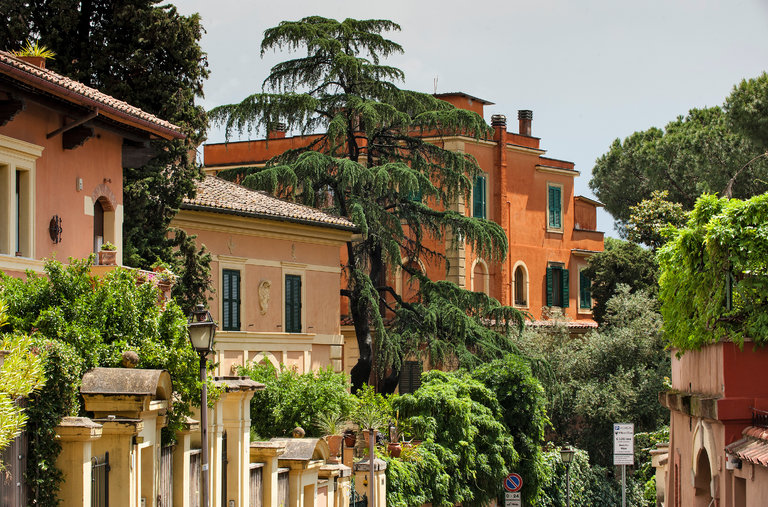 Rental apartments are abundant around the Borgo, the Spanish Steps, Campo de’ Fiori and the Coliseum. Expect to pay between $80 and $120 for a one-bedroom.

The Hotel Locarno, with generous high-ceilinged rooms, a fabulous bar and a lovely courtyard, is an oasis of class and tranquillity a stone’s throw from Piazza del Popolo. Double rooms from $156.

Across the piazza on a quaintly picturesque street, the year-and-a-half old Margutta 19 offers 16 plush, modern rooms and suites surrounding a terraced green hillside. Doubles with breakfast from $450.

Hotel Raffaello, between the Termini Station and the Monti neighborhood, is quiet, convenient and affordable with richly furnished rooms, some with terraces, starting at $111.